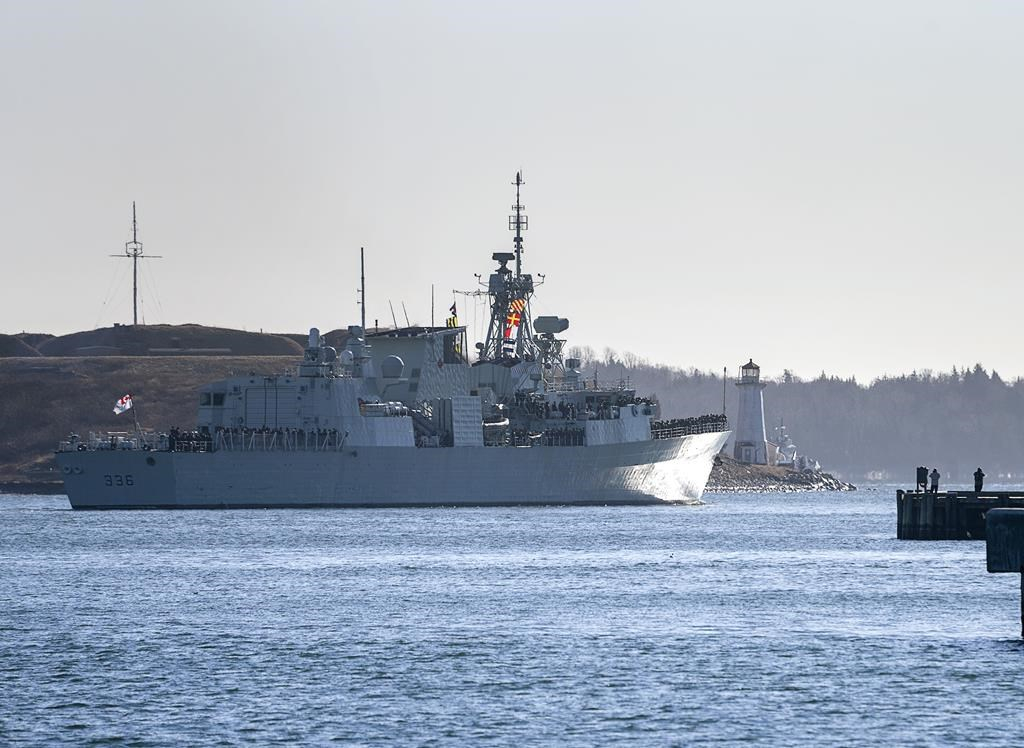 HMCS Montreal departs Halifax for a six-month deployment on a NATO mission in the Mediterranean on Wednesday, Jan. 19, 2022. Photo by: The Canadian Press/Andrew Vaughan
Previous story

HALIFAX — A Canadian warship departed for Europe and the Black Sea near Russia on Wednesday, as Prime Minister Justin Trudeau admitted to fears of a Russian invasion in Ukraine.

Trudeau went on to accuse Russia of trying to start a fight with Ukraine and promised Canada’s support to the Ukrainian people, who are on edge as 100,000 Russian troops sit on their country’s eastern border.

Yet the prime minister stopped short when asked for details, including whether the government will extend a 200-soldier Canadian training mission in Ukraine whose mandate is set to expire at the end of March.

He also declined to say whether Canada would answer Ukraine’s long-standing request for arms, after Britain this week announced it would supply anti-tank weapons to the eastern European country.

Trudeau also wouldn’t say what would happen to the 200 Canadian soldiers currently stationed across Ukraine as well as their diplomatic colleagues in Kyiv should the Russians invade, except to assert that “contingencies” are being prepared.

“The Canadian Armed Forces, the Canadian foreign service, our multilateral partners, we're all looking at a range of possibilities and contingencies to make sure that we are best able to keep people safe and support the Ukrainian people,” he said.

"Do I think he'll test the West, test the United States and NATO as significantly as he can? Yes, I think he will," Biden told a news conference at the White House marking his first full year in office.

"But I think he'll pay a serious and dear price for it that he doesn't think now will cost him what it's going to cost. And I think he'll regret having done it."

Trudeau says he fears #Russia will invade #Ukraine and sends warship to the Black Sea. #cdnpoli

Asked to elaborate, Biden said his impression is that Putin himself has not yet decided on a course of action.

"I suspect it matters which side of the bed he gets up on in the morning as to exactly what he's going to do," he said. "I don't think he's made up his mind."

Robert Zoellick, a former World Bank president and U.S. deputy secretary of state, mentioned Canada by name Wednesday when he was asked about the way forward on Ukraine during an online panel hosted by the Atlantic Council think tank.

"One idea … would be for the United States to work with Canada, which has a large Ukrainian immigrant population, as well as Europe, and to go to the Ukrainians and say, 'The key to your success and your independence and your democracy will be to have effective governance and a (healthy) economy,'" Zoellick said.

The message would "emphasize that Ukrainians are going to have to come together," he added, "and if they do, that the United States and its allies will be willing to invest rather significant sums to make sure that Ukrainian democracy works."

The result, he predicted, would be a strong signal to Russia that the West is standing behind Ukraine — particularly if the U.S. backed up the commitment with weapons, including anti-tank missiles and high-grade radar systems, to ensure Putin knows "this would be a dangerous exercise."

Earlier Wednesday, a Royal Canadian Navy frigate set sail for the Mediterranean and Black Sea, the latest such warship to deploy to the region as part of Canada’s commitments to the NATO alliance.

Due to COVID-19 restrictions, families weren't permitted on the wharf in Halifax for the traditional sendoff as the HMCS Montreal pulled away from the jetty and its 240 crew members set off for the six-month deployment.

Rear Admiral Brian Santarpia, commander of Maritime Forces Atlantic, said this voyage is part of a regular rotation of ships sent to the region to serve as a deterrent to Russian aggression since Moscow invaded and annexed Ukraine’s Crimea peninsula in 2014.

"We're always aware of any threat that is possible. So, we prepare the ship to be ready for any threat. Tensions are higher and people are aware of that … and we're at a very high level of readiness," Santarpia said.

The admiral added while the leadership team on Montreal has conducted detailed training, "they have a little more training to do when they leave here, and we'll run through scenarios with them at sea so they're ready for any possibility."

Liberal MP Yvan Baker and other MPs sent a letter on Wednesday to government House leader Mark Holland calling for an urgent debate in the House of Commons on the "critical" situation in Ukraine.

Holland wrote on Twitter that the government will support prioritizing an urgent debate as soon as the House returns, currently scheduled for Jan. 31.

Tensions are high in Europe and around the world as Russia has positioned about 100,000 troops on Ukraine's eastern border along with tanks and other heavy artillery.

While Moscow has denied plans to invade, the Russian government has demanded assurances from NATO that Ukraine will not be allowed to join the 30-country transatlantic military alliance. Canada, the United States and their allies have firmly rejected that demand.

U.S. Secretary of State Anthony Blinken urged members of the alliance on Wednesday to remain united in the face of what he termed relentless Russian aggression toward its neighbour.

Blinken accused Russia of plans to further boost its military presence on its border with Ukraine.

This report by The Canadian Press was first published Jan. 19, 2022.

— With files from Lee Berthiaume in Ottawa, James McCarten in Washington and The Associated Press

Why does the Canadian media

Why does the Canadian media never mention that the situation in Ukraine is one of simmering civil war? We are taking sides instead of looking for peace. We are deploying warships and training thugs who are more into ethnic cleansing than democracy, instead of supporting the Minsk agreement or other regional solutions. We are doing as the Americans ask while moving ever further away from our peacekeeper role.
https://www.ctvnews.ca/world/far-right-extremists-in-ukrainian-military-...

In any case, I really seriously doubt that Russia having troops in Russia means they're planning to invade Ukraine. I know the Americans find it just horrifying to find out that Russia has troops in Russia--really, who knew? And of course there's no possible security justification for putting troops near your border with a country involved in a civil war, whose government makes constant sabre-rattling speeches about you. And there's clearly no excuse for Russia being upset at the concept of the country they have the longest border with joining NATO just because it's an anti-Russia military alliance. I'm sure the United States would be meek and mild about it if Mexico started talking trash about the US, penalizing English speakers in Mexico, and then started talking about joining the Shanghai Cooperation Organization and bringing in Chinese troops.

But nonetheless, neither Russia unreasonably insisting on having troops in Russia, nor Russia paranoidly placing some of those troops where they can defend an unstable border, nor Russia peevishly objecting to neighbour states joining anti-Russia military alliances, mean Russia has plans to invade Ukraine. Ukraine is broken--it's violent, full of fascists, many of them in heavily armed militias, and has an economy in freefall. If they take it, they gotta try to fix it, and they don't have the money. It'd be like a friggin' Afghanistan. Vladimir Putin is way too canny to deliberately invite that kind of headache. He took Crimea because the naval base was strategically important and because, since practically every man, woman and child in the place was pro-Russia, he could do it without a shot fired. There is no chance he has any interest in conquering Ukraine--certainly not the way it is right now. He hasn't even let the Donbass region in, even though they had a referendum and asked pretty please could they join!

This is a ginned-up fake conflict that exists strictly for propaganda purposes. In the end, nothing is going to happen; the US and its pets will talk big and then, in the end, claim victory when Russia doesn't invade Ukraine because, duh, they were never going to. It will be spun as Russia blinking in the face of our resolute blah blah blah.

Contrariwise, if Russia DID invade Ukraine, there would be nothing the US, much less Canada, could do about it. Partly because, while Russia has no real ability to project military force a long distance from its borders, when it comes to actions in its backyard it is actually very tough, and while the US has a military dedicated to projecting force anywhere on the globe, there are limits and Ukraine is thousands and thousands of miles away. Partly because if they seriously went to war to defend Ukraine it would be very likely to escalate to nuclear armageddon, and nobody actually cares about Ukraine enough to do that. So basically, this whole thing is just silly.

If I had to guess, I'd say this is all happening because Biden's people decided they needed a bit of pugnacious foreign stuff to get a public opinion boost in time for the 2022 midterm elections.

Agreed, and thanks for the

Agreed, and thanks for the extended response. Amusingly well put. I hope you are right that the alarmism and bravado are just for domestic consumption (sad as that is to contemplate--a country that flexes overseas for votes at home instead of helping its own citizens work, eat, etc.). But if there is a permanent uptick in military "help" ie military sales to Ukraine, then the revenue stream may be hard to quit. Maybe Canadian industrialists can sell some of those not-tanks we've been making for Saudi Arabia. Meanwhile a struggling country fills up with weapons.