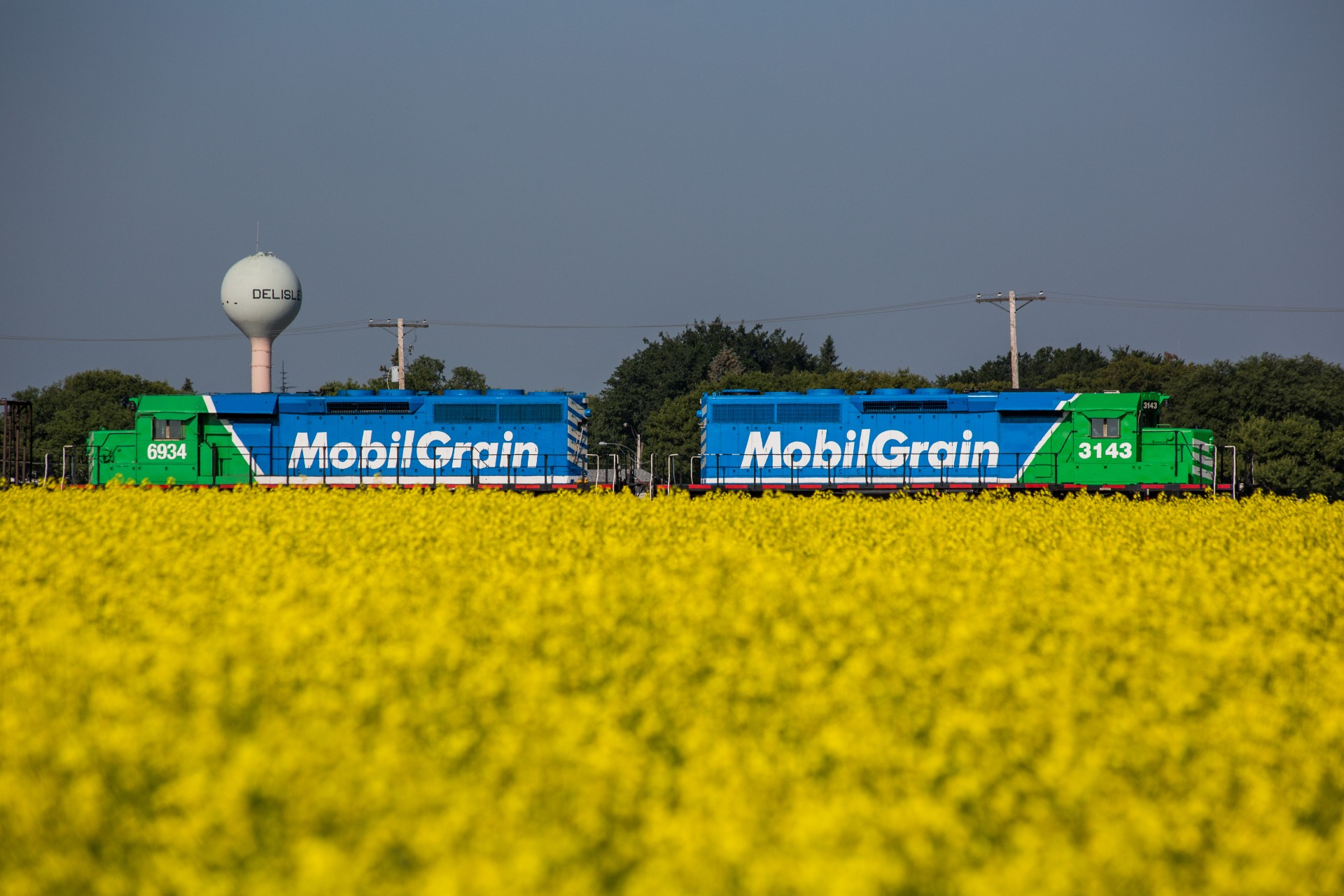 In 2027, a new facility in Regina, Sask., will be crushing canola to use for renewable diesel, a fossil fuel alternative often touted as a transition fuel. Photo supplied by AGT Foods
Previous story

In five years, Canada’s largest renewable diesel plant will be converting canola oil to renewable fuel, but some experts say this alternative is not the climate solution it is made out to be.

The project is part of the co-ops’ goal to reduce greenhouse gas emissions and was dubbed “a big win for the Saskatchewan economy, a win for workers, a win for families ... and a significant win for the environment” by Saskatchewan Premier Scott Moe. But while renewable diesel is often championed as a transition fuel, some experts remain unconvinced it is the best choice to move away from fossil fuels.

Renewable diesel is made from crushing oil from plants, including canola, palms, peanuts, soybeans and sunflower seeds. It can also be produced from waste oils, including used cooking oil from restaurants, giving old french fry grease a new lease on life.

The terms biodiesel and renewable diesel are often used interchangeably. These two fuels produce roughly the same emissions, but renewable diesel is higher quality and can be used up to 100 per cent in vehicles and up to 50 per cent in airplanes, while biodiesel must be blended with regular diesel, said Stephanie Searle, the International Council on Clean Transportation’s (ICCT) fuels program lead.

President and CEO of AGT Foods Murad Al-Katib confirmed the new operation will produce renewable diesel and told Canada’s National Observer that although the plant will be capable of producing sustainable aviation fuel, it plans to focus on fuel for tractors, semis and train locomotives.

Carbon emissions from burning biofuels are about the same as those released from burning oil and gas. The greenhouse gas savings come when the plants used to produce biofuel grow and sequester carbon during photosynthesis, said Searle.

Even those savings vary widely and depend on what organic matter is used and whether emissions from land-use change are factored in. All this makes it difficult to quantify whether biodiesel is a climate-friendly solution.

For canola specifically, some U.S. studies say producing and burning biodiesel results in approximately half the emissions of diesel because of the plant’s ability to sequester carbon.

Other studies have found those gains are outweighed by emissions from farm equipment and land-use changes caused by increased demand for canola as a food source.

Regina’s future renewable diesel facility and canola processing plant is set to be up and running in 2027. #Biofuels #NetZero #Emissions

The ideal feedstock for biofuel is waste oil because it doesn’t impact food production. However, there isn’t nearly enough of that around, so most biofuel projects require palms, soybeans or, in Canada’s case, canola to be grown and harvested specifically to make fuel. That can mean deforestation and higher emissions, said Searle.

For this reason, she said producing more renewable and biodiesel won’t get us to net-zero emissions by 2050.

Last summer, the Canadian Net-Zero Emissions Accountability Act became law and enshrined Canada’s commitment to either emit no greenhouse gas emissions by 2050 or offset those emissions with things like tree-planting or carbon capture technology.

“We're already pretty much maxing out the benefits that we can get from renewable diesel and biodiesel because most of the potential of waste oils that we could be using, we're already using,” said Searle.

In the U.S., there is not enough feedstock — from waste or crops — to keep pace with the renewable diesel projects planned or underway, and Searle predicts many will be cancelled or operate at low-capacity.

But if even a third of the new projects proceed, demand will skyrocket, and that feedstock must either come out of the food supply, force domestic crops to expand, drive up imports, expand palm oil production in Southeast Asia where deforestation runs rampant or all of the above, a new ICCT report found.

Regina’s future renewable diesel facility and canola processing plant is set to be up and running in 2027.

“The jobs and investment provided by this new plant will have a positive impact for the whole community,” Michael Kram, Conservative MP for Regina-Wascana, said in a statement to Canada’s National Observer. It will also provide “many other benefits,” he added, including developing new “more sustainable industries.”

The NDP’s natural resource critic, Charlie Angus, said “moving workers from one high-emission sector to a low-emission sector (will) be very positive as we move towards a credible plan for transition.”

“If we are looking at a plant that has access to feedstock, is not impacting other areas, (and) will reduce emissions, that, I think could be seen as a definite positive,” he said.

But this is just one step of many, Angus emphasized.

To come anywhere close to reaching net-zero by 2050, Canada needs a serious economic investment plan and a just transition for energy workers, he said.

Because renewable diesel production cannot be scaled up without increasing crop land and interfering with food sources, countries should focus on electrifying cars, trucks and “anything that goes on a road,” said Searle, adding that for machines where batteries aren’t feasible, other options — like hydrogen produced from renewable energy — make more sense.

What is the purpose of our

What is the purpose of our agriculture? To feed humans? or to feed engines? We are supposed to fight climate change via a reduction of our production of CO2. Just as the use of canola oil for diesel, the destruction of tropical forests in order to produce biofuel with palm oil is utter nonsense. Its global footprint is three times worst than that of a fossil fuel. If we want to reduce our production of carbon, the proposed remedy obviously must not be more damaging than the original «disease». In Quebec, we have another example of «renewable» biofuel. Presently, regulations state that regular gasoline must contain 5% ethanol. That would be acceptable if that fuel was produced using waste from our agricultural or forestry industry. Unfortunately, our ethanol is transformed from grain corn in the «bioraffinerie Greenfield Global » at Varennes, east of Montreal. Now, the government of Quebec wants to raise the content of ethanol in gasoline to 15% by 2030. The total footprint of GHG of this «renewable» ethanol (including fuel for plowing, tillage, sowing, harvesting, drying plus fertilizer and pesticides) is greater than that of a fossil fuel. A further negative side effect of this proposed 15% content of ethanol in gasoline would mean that almost all the corn grown in Quebec would be required for this bioenergy. (please read https://www.ledevoir.com/societe/environnement/608421/agriculture-l-etha... ) Our governments must make a decision; either our agriculture will feed humans or it will feed cars!

I wondered how "clean" the

I wondered how "clean" the ethanol component actually burns.
Research on burning ethanol in controlled conditions lead the researcher to refute the claims of ethanol heaters, to the effect that "all" that exhausted was CO2 and H2O.
"As a rule, ethanol does not burn out completely. Rather, the incineration process results in CO2 – along with poisonous gases (like carbon monoxide, a respiratory toxin), organic compounds (like benzene, a carcinogen), and irritant gases (like nitrogen dioxide and formaldehyde), as well as ultrafine combustion particles,” explains Wensing.
It doesn't sound like a pristine prospect, from any perspective.

It is important to assess the

It is important to assess the economic, energy and GHG costs in a life cycle analysis of manufacturing nitrogen fertilizer to grow canola.

"Carbon emissions from burning biofuels are about the same as those released from burning oil and gas. The greenhouse gas savings come when the plants used to produce biofuel grow and sequester carbon during photosynthesis, said Searle."

Calling this one BS accounting: what they are doing is taking a highly cultivated, highly pestiticided, highly fertilized crop, used for food oil, its own production consuming too much fossil fuel ... not to mention manufacturing the machinery involved and the fuels used in producing the materials to make those machines ... and keepthem running.

Canola as it is could stand some production emissions reductions: instead what? The "emissions savings" in terms of the growing plants are in the same category as "net zero." It's just displacing crops grown on good agricultural land that, if not required for food seed oil, would be better converted to growing vegetables.
Instead, to maintain current food production, there will have to be new fields plowed, new carbon sinks destroyed, to produce plant oil with which to make fuel that burns no cleaner than what we've got now.