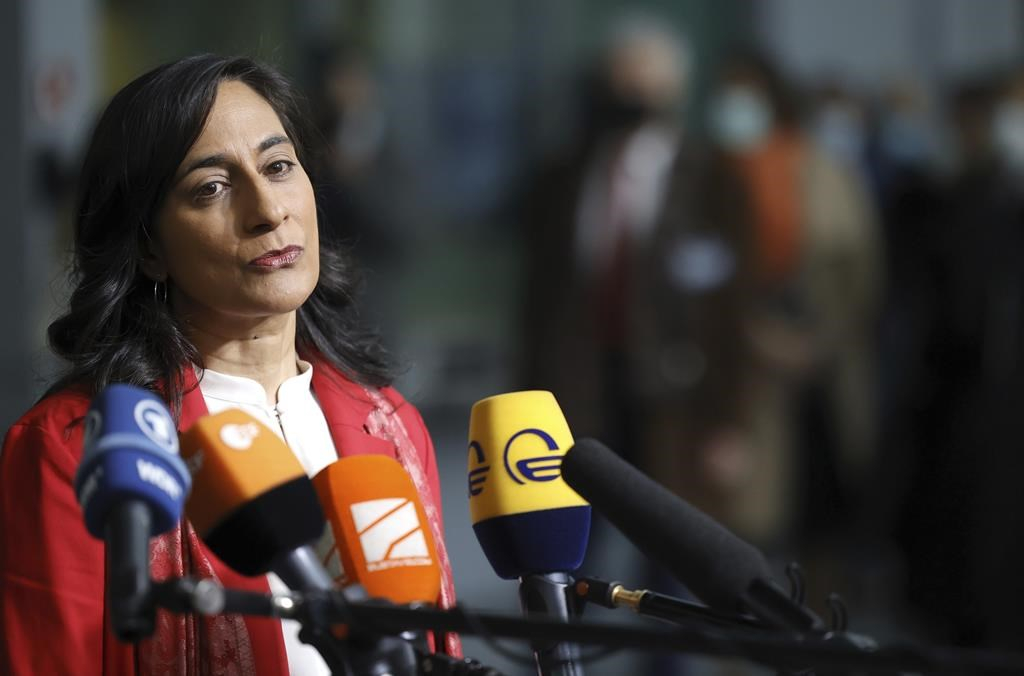 Canadian Defence Minister Anita Anand speaks with the media as she arrives for a meeting of NATO defense ministers at NATO headquarters in Brussels, on Wednesday, Feb. 16, 2022. Photo by The Associated Press/Olivier Matthys
Previous story

Canada's foreign minister has accused Russia of trying to escalate the crisis with the West by shelling a kindergarten in eastern Ukraine.

"Canada strongly condemns the unprovoked Russian military activity in the Donbas region of Ukraine. Innocent civilians were put in danger by this clear effort by Russia to escalate the crisis. We commend the restraint shown by Ukraine," Foreign Affairs Minister Mélanie Joly said in a written statement on Thursday evening.

The Ukrainian military command said shells hit a kindergarten in Stanytsia Luhanska, wounding two teachers, and cutting power to half the town. Ukraine blamed separatists for shelling its forces but said they didn't fire back.

"We will continue to work with our allies to co-ordinate our responses to deter further Russian aggression. Any further military incursion into Ukraine will have serious consequences, including co-ordinated sanctions," Joly said.

Ukrainian President Volodymyr Zelenskyy said on Twitter the shelling "by pro-Russian forces is a big provocation."

The shelling of a kindergarten in Stanytsia Luhanska by pro-Russian forces is a big provocation. It's important that diplomats & the @OSCE remain in 🇺🇦, their monitoring activities are an additional deterrent. We need an effective mechanism for recording all ceasefire violations.

The escalating hostility came as Defence Minister Anita Anand emerged from two days of meetings with NATO counterparts with fresh assurances of Canada’s commitment to the military alliance, but no new promises of reinforcements to protect allies from Russia.

Anand instead suggested the Canadian Armed Forces’ ability to deploy additional troops and equipment to eastern Europe is limited due to its numerous other commitments both at home and around the world.

"The issue is one of Canada and the Canadian Armed Forces being deployed in multiple areas at the same time," she said. "And what we are doing now is examining ways in which Canada can reinforce its presence in the region from an operational standpoint."

The minister was also noncommittal when asked about the timeline for a decision, saying she is in discussions with chief of the defence staff Gen. Wayne Eyre and other senior defence officials, "and we will be in a position to make firm decisions in the short term."

Anand was speaking at the end of a news conference in Brussels, where defence ministers from across the 30-country transatlantic alliance were seized over the last two days with Russia's recent military buildup around Ukraine and the threat of a new war in Europe.

The end of the meeting coincided with a resurgence of fears about war as U.S. President Joe Biden warned Russia could invade Ukraine within days, and violence spiked in a long-running standoff in eastern Ukraine.

Speaking at the White House, Biden said Washington had seen no signs of a promised Russian withdrawal, adding the invasion threat remains "very high" because Russia has moved more troops toward the border with Ukraine instead of pulling them back.

"Every indication we have is they’re prepared to go into Ukraine, attack Ukraine," Biden told reporters. He said the U.S. has reason to believe Russia is "engaged in a false flag operation to have an excuse to go in," but did not provide details.

Russia is believed to have built up some 150,000 soldiers and other military equipment around Ukraine’s borders. Moscow says it has no plans to invade, but has demanded NATO withdraw its troops from eastern Europe and promise not to admit Ukraine as a member.

Anand joined Biden and NATO Secretary General Jens Stoltenberg in rejecting Russian assertions it was pulling back troops from the border with Ukraine.

Anand did not hold back as she laid the blame for the current crisis at the Kremlin's feet as she promised Canada’s continued solidarity with Ukraine and NATO, including its easternmost members bordering Russia.

Prime Minister Justin Trudeau announced this week that Canada would provide a $500-million loan and $7.8 million worth of weapons and ammunition to Ukraine in response to the threat of a Russian invasion.

Yet while other NATO members have deployed additional troops to bolster the alliance’s presence in eastern Europe, Canada has not. That is despite requests from some countries, including Latvia, for reinforcements.

Anand noted Canada already has 540 soldiers leading a battlegroup in Latvia whose ranks include troops and military equipment from nine other NATO members, with the main job of protecting against a Russian attack.

"This is our largest international military operation," she said. "And during today's meeting, I reiterated our commitment to continue to reinforce the security of the alliance's eastern flank as a whole."

Yet while Anand acknowledged that NATO members such as Latvia, whose government has publicly asked for reinforcements, would like to see more Canadian assistance, the minister indicated the issue is one of capacity.

Enhancing Canada's presence in eastern Europe, she added, "is at the very top of my priority list." However, Anand said she would not be rushed and was instead "being very methodical and being very careful" before any decision is made.

The Canadian Armed Forces says it has about 2,000 service members deployed on 20 different operations in Canada and around the world. Those include large deployments in Iraq and the Middle East, Ukraine and on ships in Europe and the Asia-Pacific region.

The military has also provided support to provinces during the COVID-19 pandemic, even as it has struggled to recruit and train new members and is in the process of releasing hundreds of troops who have refused to get vaccinated.

The Armed Forces is supposed to have around 100,000 troops at full strength, but was short about 10,000 members at the end of November. Another 10,000 members were listed as unavailable for duty because they were either untrained, sick or injured.

I am disappointed with the