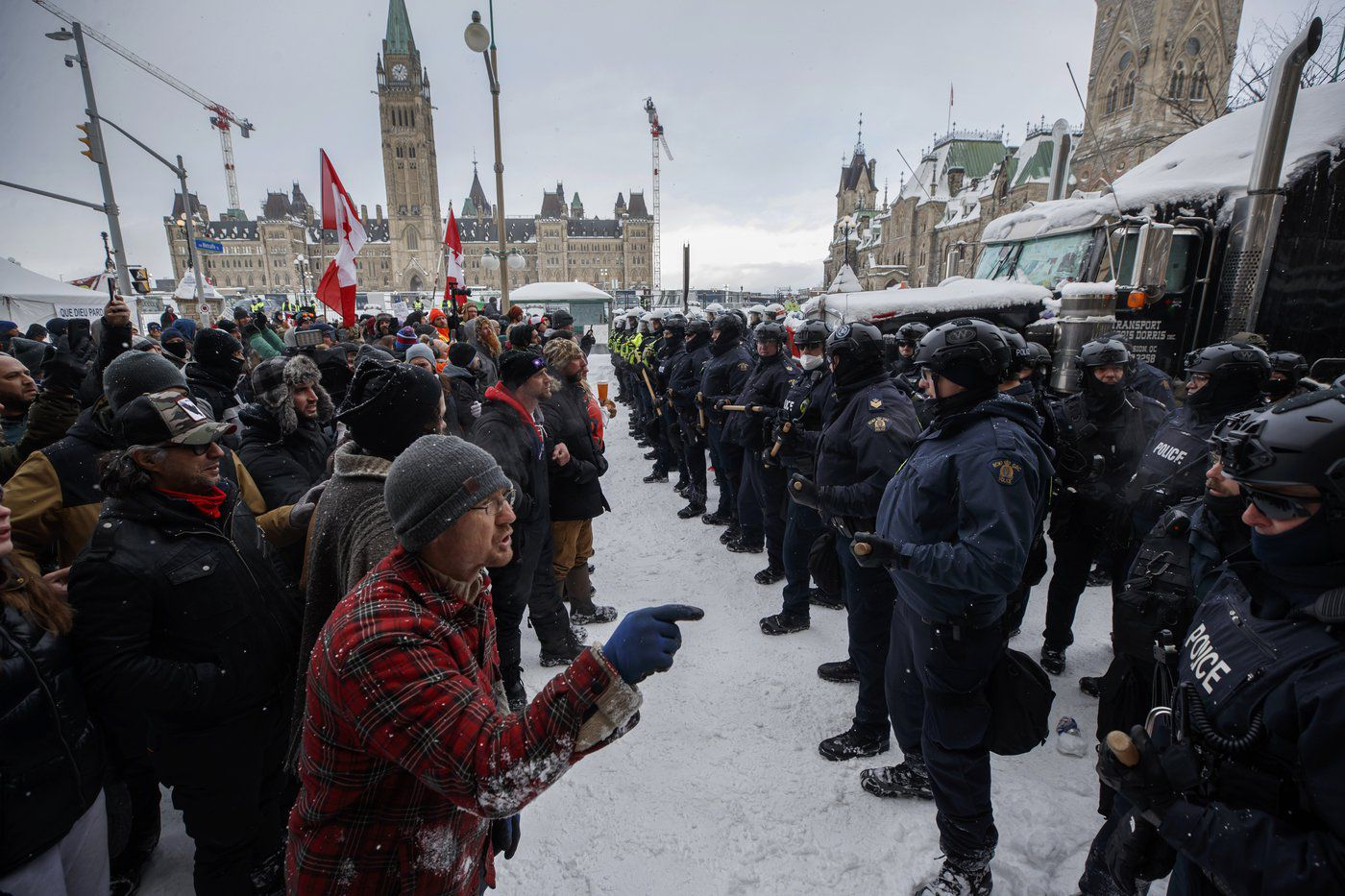 Police move in to clear downtown Ottawa near Parliament hill of protesters after weeks of demonstrations on Saturday, Feb. 19, 2022. File photo by The Canadian Press/Cole Burston
Previous story

The government's use of the emergency powers in February included allowing financial institutions to freeze the accounts of those involved in the protests that occupied streets in downtown Ottawa and blocked key border crossings.

But a House of Commons committee was told Thursday that the government was less than clear about the intended targets shortly after the financial measures were announced.

The government also granted a level of latitude to institutions that contributed to the confusion, MPs have been told.

Martha Durdin, president and CEO of the Canadian Credit Union Association, said the combined effect was a degree of panic among Canadians that their accounts could be frozen because they made small donations to the convoy.

She said that led to Canadians withdrawing large amounts from their credit union accounts, sometimes in the hundreds of thousands and, on a few occasions, millions of dollars.

Credit unions ultimately froze 10 accounts with a total value of less than half a million dollars, Durdin said, adding that many credit unions would have appreciated further guidance about precisely which accounts would be frozen.

Durdin, among others testifying today to the committee, said the situation points to a need for federal officials to communicate more clearly about emergency powers, and consult a wider array of financial institutions beyond the country's biggest banks.

"Credit unions had to really answer a lot of questions from members about under what circumstances the government can freeze accounts because many Canadians felt surprised that the government had that authority," Durdin said.

The testimony came as part of hearings the Commons finance committee is holding about the government use of never-before-used emergency powers to put an end to the protests.

Among the measures were ones requiring crowdfunding platforms to disclose information to federal law enforcement officials, as millions in donations flooded sites like GoFundMe and GiveSendGo.

Although the reporting measures for fundraising platforms were short-lived, the Liberals have said they want to make the change permanent.

Juan Benitez, the president of fundraising website GoFundMe, said his company's analysis of the more than $10 million donated through the platform found that 88 per cent of donations and 86 per cent of donors were from Canada.

The largest donation to the campaign was $30,000 and it came from Canada, said Kim Wilford, the platform's general counsel.

The platform ultimately decided to freeze funds and issue reimbursements after speaking with Ottawa's mayor and police about reports of violence, harassment and threatening behaviour.

Liberal MP Sophie Chatel raised the possibility of "Russian dark money" flowing to the convoy without citing direct evidence. Later in the hearing, Benitez said there were only a handful of donations from Russia to the convoy fundraiser and no evidence of a co-ordinated effort.

As streets in downtown Ottawa, including in front of Parliament Hill, were clogged with cars and trucks protesting public health restrictions and Prime Minister Justin Trudeau's government, sympathy protests sprang up around the country, including at key border crossings.

He said a similar amount was lost in pay for some 100,000 Canadian autoworkers.

During his opening remarks, Volpe said the blockade also cost Canada goodwill with our trading partners, and laid some blame on politicians who "shamelessly egged on" their social media followers.

"We need to have a better overall mitigation plan amongst all levels of government in place to avoid future freedom barbecues from blockading critical public infrastructure," he said.

This report by The Canadian Press was first published March 17, 2022.

Nobody knew where exactly the

Nobody knew where exactly the money was coming from, so it was simply not possible to be as prescriptive as the armchair quarterbacks of today think it should have been. The good news is that the power was used judiciously and rarely in the end.

I am always surprised about

I am always surprised about how ignorant Canadians s are on financial regulation.
Plus what the Emergency Act meant?
If you were not supporting the Convoy, not to worry. Kinda like Y2K..
Then we have supposedly intelligent Canadians who organized the Convoy, trying to invoke the American Constitution in Canada. It's not whether our education system has failed, but for how long?
Then we have Kenney supporting the convoyors, while destroying our elementary education system by making it pro business instead of pro democracy. And all the time telling us it's for the best.
Well, I guess ignorance is bliss, but with social media gaslighting at the low end, and our neoliberal premiers gaslighting us on other end, what chance does an average citizen have. Keep your money in the credit union folks, I've been a member for 60 years and my dad 40 years prior to that. Unlike the Americans with their 40,000 banks, we Canadians only have 6 significant banks, that along with our local credit unions protect their depositors with deposit guarantees.