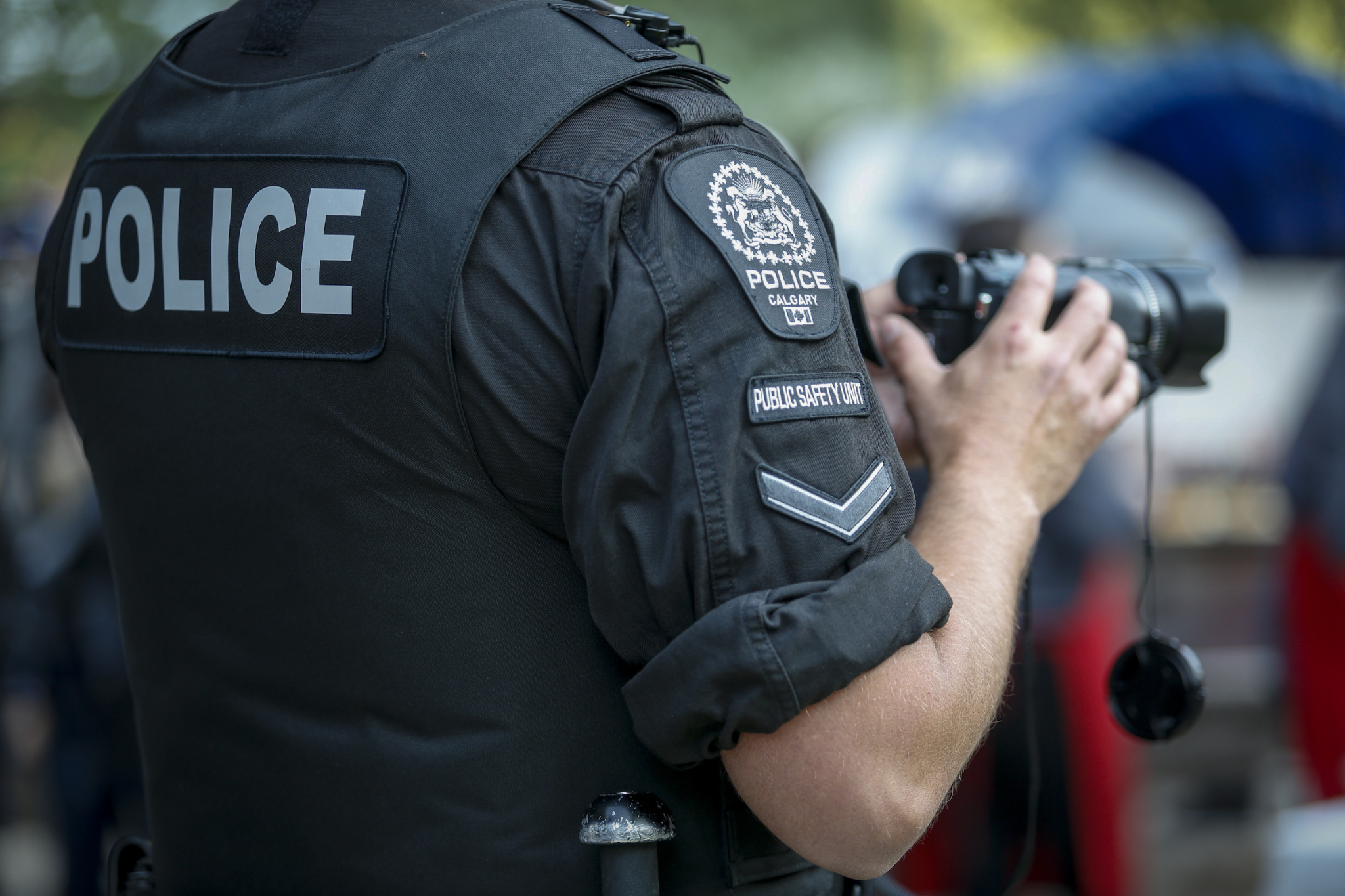 Activists in North America have worked tirelessly in recent years to raise awareness about the inequities of policing and the dangers they can pose to minority communities. But the most effective advocate for the so-called “defund the police” movement is the police themselves.

The latest example of that comes from Calgary, where the local police department is defying an order requiring them to remove the controversial “thin blue line” patches from their uniforms.

The patches, according to the police, are a visible sign of solidarity with each other and an acknowledgment of the dangers their work involves. But to people from minority communities, who have borne the overwhelming brunt of acts of police violence, the symbol is seen in a much less charitable light. That’s because it’s become associated with white supremacy and incidents like the murder of Eric Garner and George Floyd by police in the United States.

"I think it's one of those situations where the community, you know, is pretty solid in their opinion of what this symbolizes," said Jon Cornish, president of the Calgary Black Chambers. "[They] really want this one thing gone."

In most lines of work, disobeying your employer in such a blatant and public way would be grounds for termination. As law-abiding citizens, we don’t have the option of refusing to comply with orders given by our police officers. But after Calgary’s Police Commission handed down a directive requiring officers to remove the patches from their uniforms, the police essentially told their bosses — that is, the public — to pound sand.

Other forces, including the RCMP and the Toronto police, have asked their officers to remove it from their uniforms. Calgary’s Police Commission conducted a year-long consultation with members of the policing community and the public they serve and concluded with the directive to remove the patch and find a new symbol to replace it.

“People in our community have clearly expressed that the thin blue line patch on police officers makes them uncomfortable due to its history and current use by groups opposing racial equity,” commission chair Shawn Cornett said in a statement. “As policing evolves, so must its symbols.”

But Calgary’s police officers seem more interested in fighting than evolving, and they’re taking that fight to dangerous places. In a Tuesday press conference, police Chief Mark Neufeld told reporters his members were actively monitoring the online communications of commission members. “The quantity of anti-police content that’s being posted, shared or liked is really causing concern to the members,” he said.

This is, to be clear, none of their business, and certainly nothing they should be paying this sort of attention to. They’ve been given a directive by their employer, and they now have a choice: comply or resign. Section 31(2) of the Police Act is unequivocal: “Every police officer a) is, after the establishment of a commission, subject to the jurisdiction of the commission, and b) shall obey the directions of the commission.” Police officers are sworn to uphold all of the laws, not just the ones they believe in.

Stalling for time is a tactic meant to increase pressure on the commissioners, all of whom are volunteers and some from the very minority communities most adversely affected here. The city and its elected officials cannot allow this sort of insubordination to stand, nor can it permit its police commission to be intimidated or attacked. As local criminal lawyer Michael Bates told the Calgary Police Commission on Wednesday, “Calgary Police Service and its members and association representatives are not above the law. Full stop.”

Opinion: In most lines of work, disobeying your employer in such a blatant and public way would be grounds for termination, writes columnist @maxfawcett. #Police #CalgaryPolice #ThinBlueLine

One way or another, this situation will eventually be resolved. Maybe the police department’s leadership can get it together and convince members to follow their orders. Maybe the city will be able to broker some sort of compromise position in which one patch is traded for another. For example, if they refuse to take off the thin blue line patch without a fight, they could be asked to wear a “Black Lives Matter” one right next to it instead. Saying no to that would be a pretty obvious tell, after all.

But no matter how this plays out, it’s yet another reminder that we need to ask some hard questions about the role police play in our society and the way in which we fund them.

If they’re willing to disobey orders over something like this, which other orders and directives aren’t they following? And if they’re only prepared to do their jobs on their own terms, isn’t it time we looked for people who will do them on ours?

If nothing else, Calgary’s police have told us where their loyalties lie — and where they don’t.

It does seem strange to me

It does seem strange to me that Calgary Police should be so pig-headedly (apologies to pigs) resistant to reason. I am old enough to remember when police were (mistakenly) held in high esteem.

The origins of policing, focused on the securing of property rights and wealth of the aristocratic and merchant classes appears to be genetically encoded in those who join the force. It is rather instructive to study the role the British empire played during its most aggressive colonial periods in creating racist brutal police forces/para military and military actions to subdue its subjugated "native" peoples. More and more of this brutality is coming to light despite the desperate endeavor by British politicians and bureaucrats to bury/burn/destroy the records of their oppressive roles in the Caribbean, India and Africa. The nations and continents hosting the worlds people of colour could never be anything but slaves, virtual or actual to the British overlords.

The oppressive quasi military models they developed have been spread throughout their former colonies, including the US and Canada, with the result we are verging on becoming police states - not subject to the rule of law or ideals of democracy. We are, especially in the US, seeing the entire judicial apparatus being taken over by White Supremacy with politicians openly yearning for the return of Jim Crow, Slavery and non-human status for people of colour.

In Canada our police force was initiated by the Royal Northwest Mounted Police - built on the Colonialist model for the express purpose of suppressing the Metis nation and intimidating the Indigenous populations, which the RCMP seems to have inherited through their DNA and continue to express.

The surprising revolt of the Caribbean nations against the recent Royal Visit, should be sounding strident alarm bells throughout Whitehall and the rest of the "Commonwealth". It calls into question the very foundations of this vaunted Commonwealth created to replace the Empire and enshrine the moral superiority of the predatory Brits. A four hundred year old empire of asset stripping predatory capitalism concentrating stolen wealth into a tiny Island of self entitled white bigots and racists is not an inspiring model for human survival. Throughout history, Britain has lauded itself for the "peaceful" nature of its colonies while rigorously suppressing the reality of its bellicose and genocidal behaviour.

I suppose it is no surprise that its finest creations of illiberal and brutal police actions have survived the collapse of their progenitive political and economic system. It is about time to change the blazingly false narrative.

Today's police should be mortified by their origins and by their unthinking and self destructive adherence to the ideology. Time and statistics demonstrate that the current policing model is so toxic to the practitioners that they lead the pack in suicides, domestic violence, alcohol and other addictions, and even in the corrupt betrayal of their own thin blue line.

The dumb blue line is

The dumb blue line is appropriate for Calgary and Edmonton police. Their actions show what their motives are, loud and clear.