By Barry Saxifrage | Analysis, Climate Solutions Reporting | April 14th 2022
#1985 of 2164 articles from the Special Report: Race to a Safer World 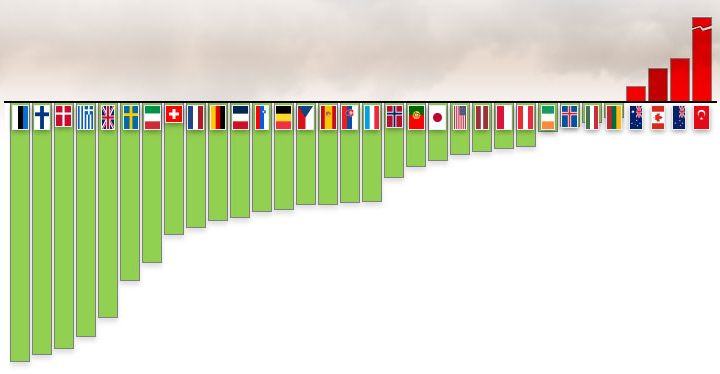 The Organization for Economic Co-operation and Development (OECD) is a group of developed nations working together to advance democracy and the market economy. Combined, these nations generate around half the world's GDP.

Over the last decade, as the climate crisis started to hammer away with increasing speed and fury, most of these nations reduced their climate pollution.

Canada was one of the few still cranking it higher.

The green bars on the chart show that 28 OECD nations reduced emissions over the last decade. Some by a lot. And most nations that cut emissions also showed strong economic gains. For example, five of the nations with the largest percentage of emissions cuts — Estonia (-31 per cent), Finland (-30 per cent), Denmark (-29 per cent), United Kingdom (-26 per cent), and Sweden (-21 per cent) — all saw their economies grow as fast, or faster, than Canada. Note: For economic comparisons, I used "GDP in current US dollars" from International Monetary Fund data.

Speaking of Canada, the red bars show that we are in a small outlier group of OECD nations that increased emissions over the last decade. When it comes to doing our fair share in the fight for a safe climate future, this data shows how out of step Canada is with most of our peer nations.

My second chart shows emissions per person. Once again, Canada is at the very extreme end when it comes to climate polluting.

Analysis: Compared to other #OECD nations, #Canada is a rogue super-emitter, writes @saxifrages for @nationalobserver. #ClimateCrisis

More discouragingly, the chart also shows that Canada has been dragging its feet on reducing our oversized emissions per person. You can see this by looking at the dashed boxes that sit on top of most of the bars. These indicate reductions since 2010. For example, the small, dashed box on Canada's bar shows we only reduced our emissions per person by a small amount over the last decade — just five per cent. The Americans' dashed box is far larger, showing they reduced more than twice as much as we did — cutting 12 per cent. That's also the average reduction across all OECD nations. The Germans managed to cut even more at 17 per cent. While the British cut 30 per cent, which was six times more than Canadians.

The Canadian government likes to call itself a "climate leader." A quick look at what our OECD peer nations have done, however, makes "climate rogue" seem far more appropriate. As these charts make clear, we consistently show up at the most-polluting end of the rankings — both for how much climate harm we cause and for how shockingly little we've done to rein it in.

We know what policies work to cut emissions. And we know which technologies lower emissions and which ones make them worse. If we wanted to, Canada could make sizable reductions in our emissions by adopting the best practices proven to work in many of our peer nations.

For example, we could adopt the United Kingdom's successful Carbon Budget Law that's helped cut its emissions in half while ours went up. We could align our carbon pricing with our European peers to make polluters pay their fair share. We could adopt Norway's successful electric vehicle policies that have led to 90 per cent of its new car sales being powered by super-clean, locally produced electricity — versus just five per cent here in Canada.

We have lots of options. Being a rogue super-emitter isn't the only one we have to choose from.

Wrong-way Canada emitting more while our G7 peers clean up

The IPCC should sanction

The IPCC should sanction Canada.

Canada is an embarrassment

Canada is an embarrassment

"We could adopt Norway's

"We could adopt Norway's successful electric vehicle policies that have led to 90 per cent of its new car sales being powered by super-clean, locally produced electricity — versus just five per cent here in Canada."

Environmentalists who envision a sustainable future should not advocate for EVs.
Wrong prescription.

Totally agree. In fact, I've been saying the same thing since the mid-90s, and plenty of times on this site.

Just before the pandemic hit the city of Vancouver (not the Metro) achieved nearly 55% transit, walking and bike mode share of all commutes. They did this using a couple of instruments: zoning and transportation, namely new transit and bike route infrastructure. TransLink completed two high capacity rapid transit rail lines and instituted several regional express bus routes since 2000. Transit-oriented development justifiably arose, but not in forms that I personally like. New ridership came in enough numbers to pay for half of all transit operating costs through the farebox.

Downtown was built upwards, but an effort was expended on pedestrian high streets and waterfront assets to protect or enhance them. A full 40% of West End residents do not own cars, and the newer neighbourhoods of Yaletown, North False Creek and Coal Harbour have populations that prefer to walk everywhere. Many new developments offer some apartments without associated $60K underground parking spaces, but do come with dedicated banks of car share spaces. These are some of the actions that resulted in double digit decreases in Vancouver's emissions and traffic into the downtown peninsula.

I wouldn't be too fast to eliminate EVs from the bag of solutions quite yet. Car dependency and irrational vehicle love (represented in TV commercials ad nauseam) will take time to erode. EVs will create a steep economic demand for renewable electricity, which will help fund electrical infrastructure supply and displace Alberta tar sands products in BC via the TMX, its largest market. In other words, EVs will help catalyze a genuine transition, but to a limit.

Meanwhile, we have the knowledge that the laws of physics will not permit a 1:1 displacement of combustion cars with EVs -- there isn't enough cheap clean energy to do that. So, probably 1/3 of the national urban car fleet will disappear as EVs and the urban transit networks are built up, and hopefully a new respect for greenbelts and smart growth principles will appear. The world's rate of car dependency peaked in 2015 (Newman Kenworthy) mainly due to the advent of new high capacity metro systems in Asian and European cities since 2000. As with oil dependency, Canada has a car dependency problem. It needn't stay this way.

We have a tiny Japanese econobox and we don't drive it much because we live in a walkable community with hundreds of shops nearby. A tank of gas lasts two+ months. It's enough. An EV will not be required within the foreseeable future, though my multiple car owning neighbours will think that's crazy.

"Canada is a rogue super

"Canada is a rogue super-emitter"

No surprise. If you base your climate "plan" on fossil-fuel expansion, you can expect to fail.
In Canada, high-profile academics, "pragmatic" environmentalists, and corporate-funded ENGOs approve climate "plans" designed to fail. They also endorse political parties who promote them.

"Clean Energy Canada executive director Merran Smith said she agrees with Weaver that the Liberal plan is ambitious and solid.
"'B.C. is a battleground for this election and British Columbians are known to care about climate, which is why I think we see climate leaders like Andrew Weaver speaking up clearly that the Liberal climate plan is the only solid plan to address climate change.'"
https://www.nationalobserver.com/2021/09/14/news/trudeau-hopes-endorseme...

"Pragmatic" environmentalists even write op-eds in the Globe and Mail making the oilsands industry's case for new export pipelines.
"Balancing climate and energy policy, the Trans Mountain pipeline is the right decision for Canada"
https://www.theglobeandmail.com/opinion/article-balancing-climate-and-en...

Another prominent voice embracing failure:
"Each of the climate platform scorecards suggests the Liberals have found the sweet spot, offering a relatively ambitious target coupled with the most credible plan to meet it. Their plan is credible because it builds on their efforts to date.
"… But on Sept. 20, I’ll be casting my ballot for the Liberals’ climate plan, confident that they’re up to the task and committed to the hard work needed to take the next steps forward towards a climate-safe future."
https://www.nationalobserver.com/2021/09/17/opinion/now-every-election-c...

Before the 2021 federal election, a high-profile SFU energy economist famously proclaimed that the Liberals were the most "climate sincere".
"Climate crisis and elections: An urgent time for honesty"
https://www.nationalobserver.com/2021/09/14/opinion/climate-crisis-elect...

The Observer's star columnists also told climate voters to go with the Liberals in 2021:
"Are the Liberals our best chance?
"On the climate score, it's arguable that the Trudeau government's performance has long been under-rated. This is a somewhat self-inflicted wound, as the party's own focus on Justin Trudeau obscures outstanding leadership of Catherine McKenna and Jonathan Wilkinson in Canada's environment and infrastructure portfolios.
"Notably, former BC Green Party leader Andrew Weaver endorsed the Liberal climate platform as 'a plan that reflects the urgency and scale of the crisis.' Weaver was a lead author of the IPCC 2nd, 3rd, 4th, and 5th scientific assessments, and former chief editor of the Journal of Climate.
"And respected independent experts Mark Jaccard and Katharine Hayhoe have also awarded high marks to the Liberals, while expressing dissatisfaction with the NDP and Green Party plans to achieve laudably ambitious goals."

When Canada's climate leaders and opinion leaders endorse Liberal climate plans based on fossil-fuel expansion, they enable climate disaster, imperil future generations, and sell their grandchildren down the river.

Yes, we should do like Norway and use the money that the government get from the exploitation of oil and gas to promote and subsidize electric cars....
Norway is in the global top 7 exporter of crude oil. The oil and gas sector constituted around 18% of Norwegian GDP and 62% of Norwegian exports in 2018. In the final quarter of 2021, Norway's oil and gas exports reached more than NOK 100 billion (USD $11.5 billion) per month.
The Norwegian state owns 67% of the shares in Equinor (the same company involved in the Bay du Nord project). In 2021, expected dividends paid to the state were around NOK 10.4 billion (USD $1.18 billion).
Fortunately for Norway, the country has also access (like in Quebec) to a large source of cheap hydro electricity that makes it a lot easier switching to electric vehicles.
So the lesson here is that Canada, like Norway, should also use its dirty money coming from the fossil fuel industry to go green....

The irony here is that this

The irony here is that this is what the liberals are exactly doing.
I totally agree with Geoffrey Pounder that electric vehicles are not the solution to climate change, especially if people switch their big SUVs and pickup trucks to electric ones. Consuming less would be a very good start.

In addition to being rogue,

In addition to being rogue, Canada is an abject colonial relic - still swinging to the wind of foreign investors, and worse, paying them subsidies to strip our contaminating (tar sands) assets. We have never stood up to the offshore pirates nor required our home grown oligarchs to toe the line, act like bona fide Canadians, pay their taxes and stop secreting their profits in tax havens; after first cheating their workers, their governments and even the misguided public who might have bought their stocks.