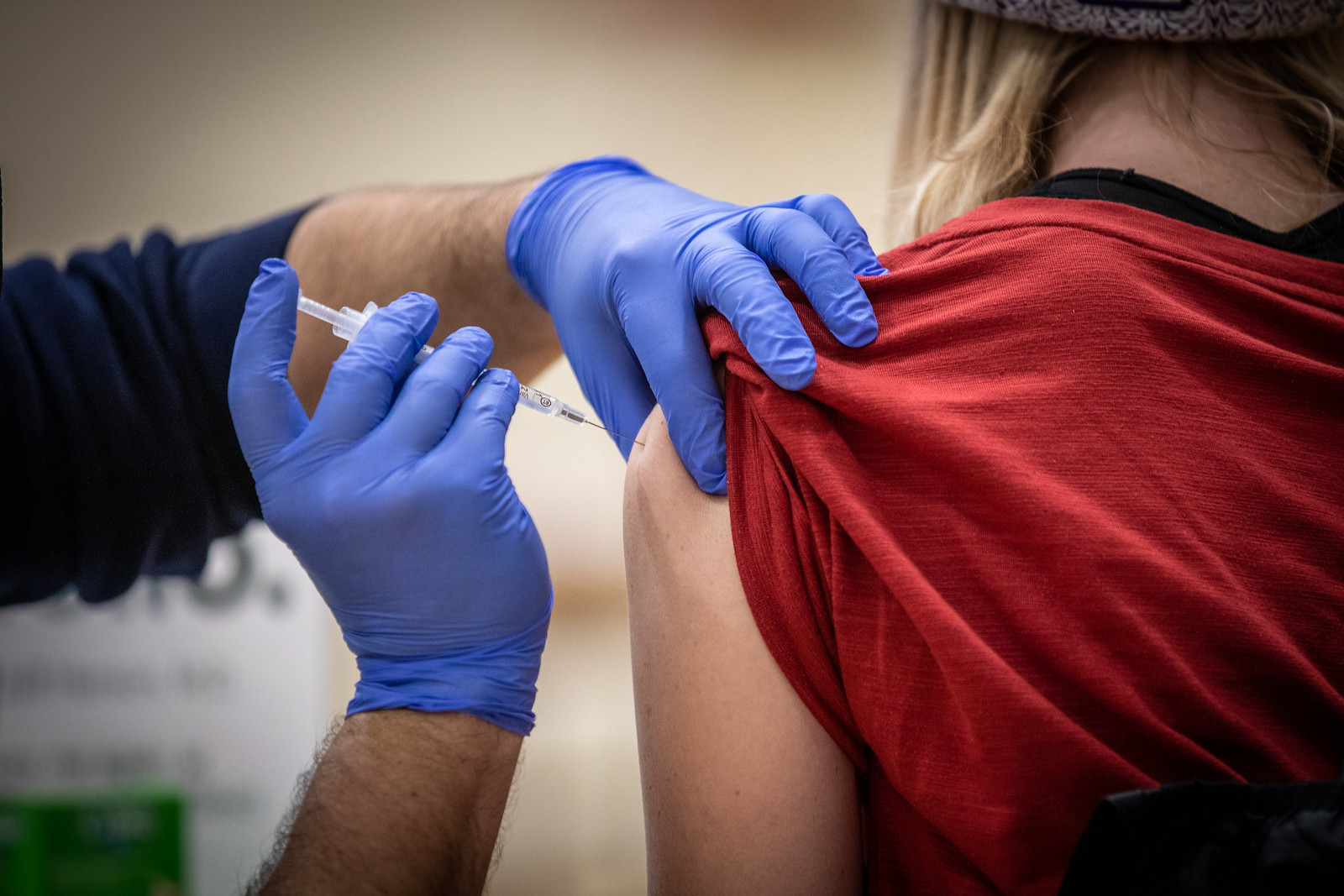 While remaining unvaccinated against COVID-19 is often framed as a personal choice, those who spurn the vaccines raise the risk of infection for those around them, a new study suggests. Photo by Phil Roeder/ Flickr (CC BY 2.0)
Previous story

While remaining unvaccinated against COVID-19 is often framed as a personal choice, those who spurn the vaccines raise the risk of infection for those around them, a new study suggests.

The research published Monday in the Canadian Medical Association Journal found that vaccinated people who mix with those who are not vaccinated have a significantly greater chance of being infected than those who stick with people who have received the shot.

In contrast, unvaccinated people's risk of contracting COVID-19 drops when they spend time with people who are vaccinated, because they serve as a buffer to transmission, according to the mathematical model used in the study.

Co-author David Fisman, of the University of Toronto's Dalla Lana school of public health, said the message of the study is that the choice to get vaccinated can't be thought of as merely personal.

"You may like to drive your car 200 kilometres an hour and think that's fun, but we don’t allow you to do that on a highway partly because you can kill and injure yourself, but also because you're creating risk for those around you," he said in a recent interview.

Fisman said the idea for study came a few months ago amid the debate around vaccine passports and vaccine mandates.

The conclusion, he said, is that "public health is something you actually have to do collectively."

"What we kind of concluded is that the decision to not be vaccinated — you can't really regard it as a self-regarding risk (because) you're creating risk for other people around you by interacting with them," he said.

The researchers used a mathematical model to estimate how many infections would occur in a population, depending on how much mixing occurred between vaccinated and unvaccinated people. It found that when people mixed with people of a similar vaccination status, infection rates among vaccinated people decreased from 15 per cent to 10 per cent, and they increased from 62 per cent to 79 per cent among those who were vaccinated.

Fisman said that in real life, people tend to spend the most time with people who are similar to them. So, he said, even if vaccinated people are most likely to spend time with others who have received shots, they're disproportionately impacted when they spend time with those who haven't.

He said the arrival of more contagious COVID-19 variants, such as Omicron, have impacted both vaccine effectiveness and public faith in vaccination. But he said that even when vaccine efficacy was lowered to 40 per cent in the model and the reproductive rate was increased to account for a more contagious variant the overall conclusions were the same.

He said the study actually underplays the importance of vaccines in one way because it doesn't take into account how they vastly cut the chances of death and hospitalization.

Fisman said the results, from a purely "utilitarian" perspective, provide justification for the implementation of public health measures such as vaccine passports and vaccine mandates.

However, he acknowledges that a simple mathematical model doesn't fully reflect the real world or the diverse factors that must be taken into account when setting public health policy, including political considerations and public anger.

Too bad sewage sampling can't discriminate between the infected vaxxed unvaxxed.
Unfortunately, all the emphasis went to modelling with earlier variants, as to similarity between vax and prior infection.
A neighbour tells me that some of the kids in her daughter's (now unmasked) classroom have had Omicron in February, followed by another Omicron variant in April.
Someone should point out to the parents of the unvaccinated 60% of under-12s that "negative effects" of illness (including lung tissue damage and long Covid) are worse by far than any "negative effects" of vaccines, mRNA or otherwise.
The thing about disinformation is that it's harder to change ppl's minds than it is to influence a mind with no opinion yet. Myths die hard.

Indeed, ‘he acknowledges that

Indeed, ‘he acknowledges that a simple mathematical model doesn't fully reflect the real world or the diverse factors that must be taken into account when setting public health policy, including political considerations’. This kind of study beggars belief in many ways, and seems to start from a somewhat reactionary premise of division which was the problem of vaccine passports in the first place: "We thought what was missing from that conversation was, what are the rights of vaccinated people to be protected from unvaccinated people?" he said. But this notion was not really missing from political conversations at all, hence vaccine passports.
Vaccines have undoubtedly been successful in reducing mortality and seriousness of disease, but they do not stop people getting infected and encouraging people to think that was a real problem in the early days of vaccination. A policy which solely focuses on vaccinations is a problem, we need wider proactive policies where spaces are redesigned for public health and conviviality, not for profit making. These kinds of simplistic studies really do not help in getting ourselves to a better place.