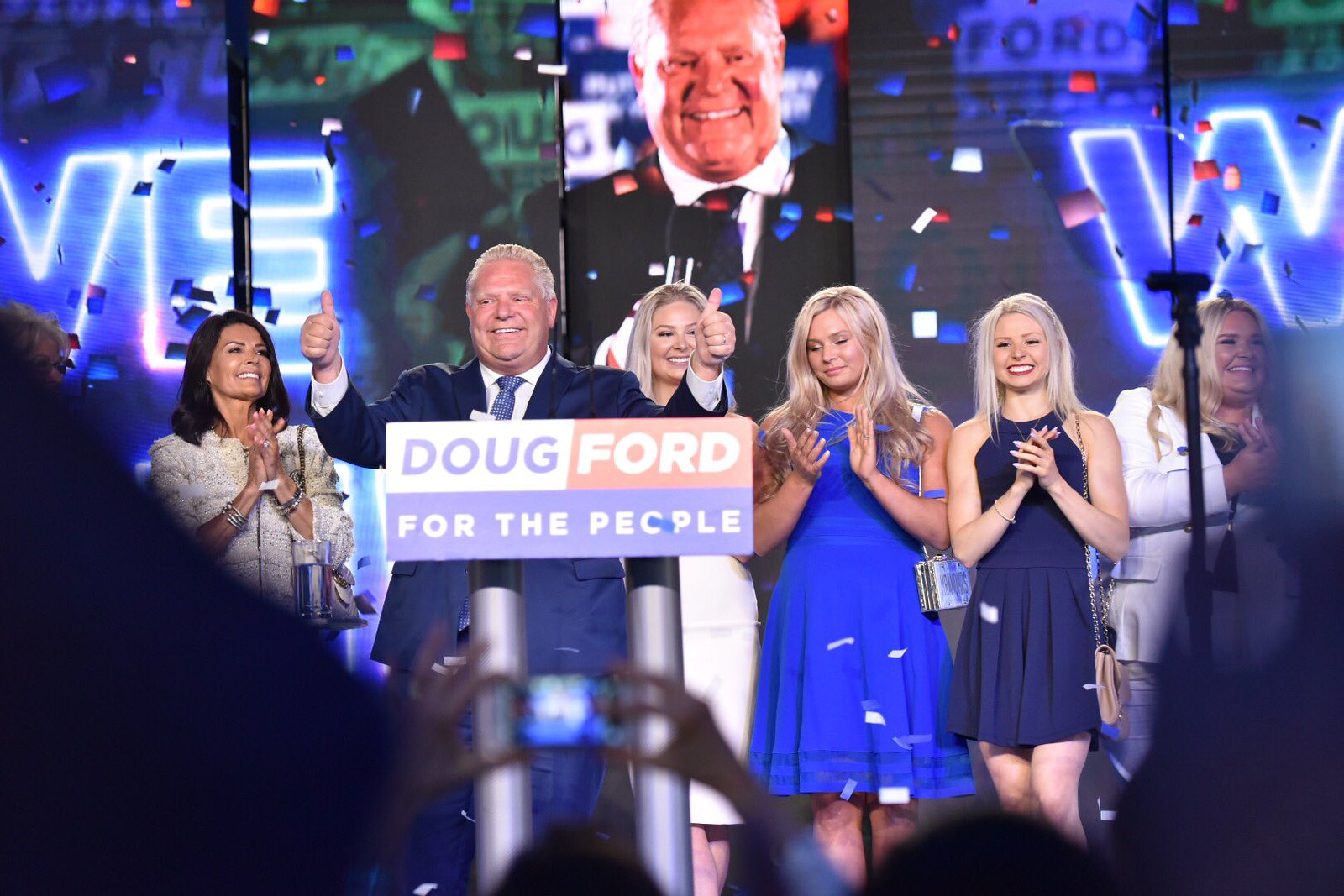 Make no mistake, for all of his fumbles and bumbles and his total lack of interest in things like policy and ideas, Doug Ford is a skilled and effective politician, writes columnist Max Fawcett. Photo via Doug Ford/Flickr (CC BY-SA 2.0)
Previous story

Bribing voters with their own money is a time-tested political strategy, but few have ever taken it to the level Doug Ford’s government just did.

In their April budget, the Progressive Conservatives promised Ontarians a record $198.6 billion in spending, including major new allocations for highways, transit and health care. That’s $40 billion more than Kathleen Wynne’s Ontario Liberal government, one that was routinely skewered for being careless with the province’s cash, ever dared to spend. There’s just one catch: it only gets spent if Ford’s Progressive Conservatives get re-elected.

This puts the lie, once again, to the idea conservatives are prudent fiscal managers or that they believe in a smaller and more efficient government. But Ford’s unique political brand is built on a willingness to break with the sort of ideological orthodoxy that tends to animate conservatives like Pierre Poilievre or Jason Kenney. It’s why Ford was happy to say nice things about Chrystia Freeland during the darkest days of the pandemic and why he stood next to Justin Trudeau on Monday to announce billions in joint subsidies for Ontario’s electric vehicle sector.

And it’s why he’ll probably win this election in a walk.

Recent polls put the Progressive Conservatives within reach of a majority government, with CBC’s poll tracker estimating they have an 82 per cent chance of winning four more years in power. That’s a credit to Ford’s folksy charm and his relentless focus on pocketbook issues, along with a reflection of the reality that conservatives tend to do better in Ontario when Liberals are in power in Ottawa.

It’s also a testament to the ineffectiveness of the NDP, Ontario’s official Opposition, which is now running in a clear third place — and poised to lose as many as half the seats it won in 2018.

Ford’s shoddy record as premier should have presented an endless stream of opportunities for the party to build on its gains and clearly present itself as the government-in-waiting. Instead, it’s polling lower than an Ontario Liberal Party that lost its official party status in the last election and whose leader is still a mystery to the vast majority of voters.

The Ontario NDP appears to be betting that its robust policy platform and the contrast with Ford’s complete lack of interest in policy can help bridge the gap between the two parties. But as University of Waterloo professor Robert Danisch wrote in a recent piece, that fundamentally misunderstands what an election is about. “Elections are communication challenges, and communication is not a rational process of information transmission,” he wrote. “In other words, if politicians think they’re good communicators because they’re deftly able to convey accurate information about policy positions, then those politicians are likely terrible at communication.”

Ford’s election in 2018 should be all the proof anyone needs that policy is the salad of any election meal. The main course is an easily digested narrative, and Ontario’s New Democrats haven’t been nearly as good at serving that up to voters as Ford’s PCs. And make no mistake: for all of his fumbles and bumbles and his total lack of interest in things like policy and ideas, Ford is a skilled and effective politician.

His bribery-tinged budget is a perfect example of that skill. It boxes both progressive parties in and prevents them from arguing a conservative government will cut spending on the things they care about. Yes, this annoys fiscal conservatives like Lorrie Goldstein, who have complained the recent budget makes Doug Ford’s conservatives little more than glorified Liberals. But Ford’s lack of ideological consistency and his flexible (or non-existent) principles are an electoral strength rather than a weakness in a province like Ontario.

Opinion: Make no mistake, for all of his fumbles and bumbles and his total lack of interest in things like policy and ideas, Doug Ford is a skilled and effective politician, writes columnist @maxfawcett. #OnPoli #OnElxn

None of this is to suggest Ford is unbeatable or the NDP is doomed to finish in third place. The 2015 federal election, where Justin Trudeau’s Liberals came from behind both the NDP and Conservatives to win a majority, is just one of many recent reminders that campaigns do, in fact, matter.

But if someone other than Ford is going to be Ontario’s next premier, the other two leaders need to take the fight to him more effectively than they have to date.

That means reminding Ontarians who he really is and what his record in office really looks like.

Most importantly, though, it means turning his biggest strength into a point of weakness. Ford’s lack of principles may help him avoid getting painted into the sort of corners that routinely trap other conservative leaders, but they also mean that he doesn’t really stand for anything other than himself.

The consequences of that were laid bare over and over again during the pandemic when Ford reliably chose political expediency or his own personal popularity over the public’s best interests.

He’ll keep doing that if he gets re-elected, of course, and it’s on his opponents to remind voters of that each and every day. If they can get voters to see him for who he really is, and not who he’s pretended to be over the last four years, they still have a fighting chance.

I'm glad that someone is

I'm glad that someone is finally saying what my wife and I have been saying for 2 years - the Ontario NDP has been MIA, even though they held the office of official opposition. The article does mention tangentially that opposition support is coalescing around the Ontario Liberal party. I hope the authors when they critique the OLP campaign platform will remember what was written here - that ultimately the platform is nothing more than a salad - it's how voters feel that is important.

I read the Toronto Sun link

I read the Toronto Sun link written by a "fiscal conservative" who sums up the heart of the matter here by putting quotes around "green" energy, thereby implying disdain for expenditures related to mitigating climate change because a majority of conservatives DON'T THINK CLIMATE CHANGE IS REAL. If the Ontario Liberals, NDP and Greens supposedly DO think it's real, they should be uniting to do what's required, which would mean the world AND show ACTUAL leadership. When you look at the numbers, that would be over half of the population, which is as good as its ever going to get for effective governance.
People are so stupidly self-involved that they somehow can't GET TO that reality, that numbers game that is the difference between hope and despair for millions. It's getting harder and harder to maintain patience anymore and not to feel "a pox on all their houses" because that's what all these f*ing politicians are in fact doing to us with their narcissism of small differences. The understatement of the century.
It's as stark as the fact that a majority of conservatives don't value women as fully functioning human beings because of the substantial proportion of those who are "social conservatives" which means RELIGIOUS. And absolutely no one wants to talk about the problems with THAT and with the indoctrinated "believers," the increasingly dangerous deluded among us with their alternate reality and alternate authority that runs counter to the reality we actually all LIVE IN.

A couple of points

A couple of points
First: Ford may be bribing the people of Ontario with their own money. But if multiple recent reports are accurate, the cheques are bouncing. On Twitter, and elsewhere, I have heard people say that the license sticker rebate cheques are being returned (as NSF?). Not a good look just as the real politicking begins.
Second: Yes the Ontario NDP has seemed ineffective, but the reason is self-evident. In spite of being Her Majesty's Loyal Opposition, practically none of the MPPs holding Critic posts are contacted for comment about any of the governing party's actions.
Just as when Jack Layton lead the Official Opposition in Ottawa, the media have either used talking heads (yes, some of them are quite good & may be aligned with the NDP) or supporters of the Ontario/Federal Liberals - official party status not withstanding.

Four years of Ford government have been an unmitigated disaster for good governance, the environment and the fight against climate change. Several NGOs have amply demonstrated that, including Environmental Defence and, most effectively, SCAN! (Seniors for Climate Action Now).