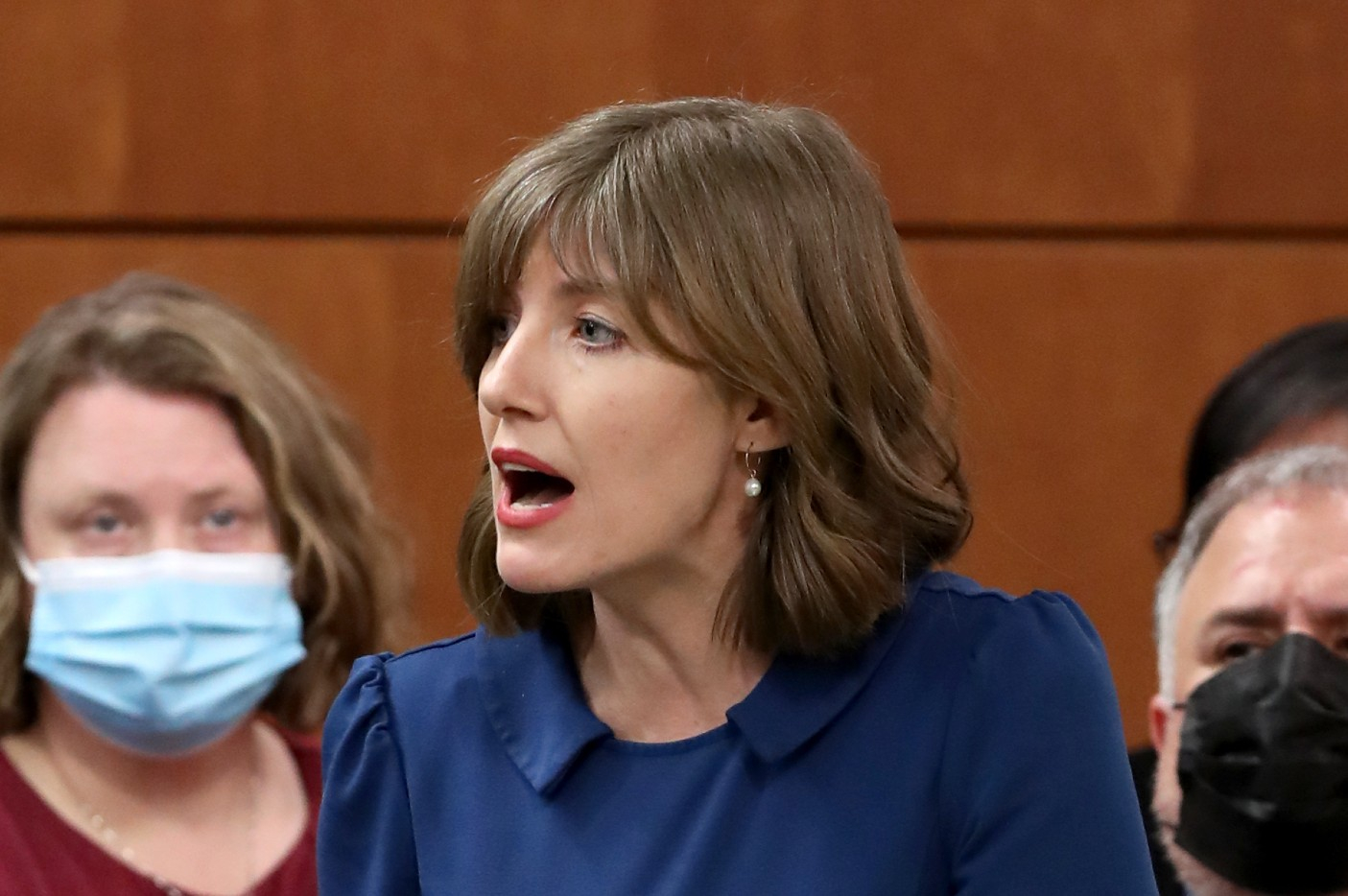 On Tuesday the Liberals faced an onslaught of criticism from NDP MPs in question period. Photo courtesy of Laurel Collins' office
Previous story

The Liberals endured a day-long grilling over fossil fuel subsidies from the New Democrats on Tuesday.

Although the NDP has agreed to prop up the Liberals’ minority government until 2025, this has not stopped the party from levelling constant criticism at this aspect of the federal government’s climate policy.

The full-frontal attack began during question period where NDP Leader Jagmeet Singh, environment critic Laurel Collins and natural resources critic Charlie Angus grilled the government on fossil fuel subsidies. Collins called for unanimous consent on a motion to eliminate all subsidies, public financing and other fiscal supports to the oil and gas sector before the end of 2022. Her proposal was met with a chorus of “No’s” — as were several other unanimous consent motions.

On May 3, NDP environment critic Laurel Collins called for unanimous consent in the House of Commons on a motion to eliminate all subsidies, public financing and other fiscal supports to the oil and gas sector before the end of 2022.

Subsidies are top of mind for climate-focused MPs and activists who say using public dollars to prop up the fossil fuel industry risks locking in those emissions for years to come. Budget 2022’s big-ticket climate item is a contentious investment tax credit for carbon capture, utilization and storage (CCUS), which environmentalists and experts insist is a de facto subsidy to the oil and gas industry. Collins also spearheaded a committee study on fossil fuel subsidies that is set to wrap up this Thursday.

Singh kicked off the criticism by asking the government why it hands subsidies to large oil and gas companies making record profits. Angus chimed in to declare that the government “is turning themselves into an open bar for the oil lobby.”

Natural Resources Minister Jonathan Wilkinson defended the Liberal position, saying the government’s “ambitious climate plan” will reduce greenhouse gas emissions but also maintain a strong economy and create “good jobs for Canadians across the country.” This involves “working with the steel sector, the oil sector and all sectors,” said Wilkinson.

Collins went after the CCUS tax credit. The Intergovernmental Panel on Climate Change says “carbon capture is one of the least effective and most expensive options to address climate change,” Collins told the House. “Why is the government listening to Big Oil instead of the science?”

After bombarding the Liberal government with questions on fossil fuel subsidies, @Laurel_BC sat down to discuss the hot-button topic with @MorriceMike, @BeyNate and Monique Pauzé. #FossilFuelSubsidies #CCUS #cdnpoli

Later that night, representatives from the NDP, Green Party, Bloc Québécois and Liberal Party came together at a virtual town hall to discuss strategies to phase out subsidies and answer questions from the public. The Conservative Party did not have an MP participate in the event.

While the federal government’s commitment to phase out fossil fuels two years sooner than the 2025 G20 pledge is welcome, it's hard to believe this promise when Budget 2022 introduces a “new subsidy,” Collins told viewers.

The CCUS tax credit is expected to cost $2.6 billion over five years and will be available for projects that permanently store captured carbon dioxide (CO2) in concrete or inject it into rock formations deep underground.

“When it comes to climate, it just feels like one loss after another, particularly on fossil fuel subsidies,” Green MP Mike Morrice said at the town hall. “It seems like it's just fossil fuel subsidies under any other name,” he said, referring to a financial aid program for struggling oil and gas companies that Canada’s environment commissioner said amounts to little more than a subsidy.

The billions committed to CCUS — which Morrice called a “false climate solution” — should go to proven solutions that will yield quick emission reductions.

Liberal MP Nathaniel Erskine-Smith disagreed, saying although the technology for CCUS is not yet proven, “it’s all hands on deck” and we need investments to explore all opportunities. However, he says spending on things like CCUS must be accompanied by adequate investments in other solutions and that “we should spend on all of these things at a much greater scale.”

He said that while the panel could “quibble” about what amounts to a fossil fuel subsidy, he feels greater “accountability needs to be brought to bear” on the government’s promise to develop a plan to phase out public financing of the fossil fuel sector.

Canada provided 14 times more public finance to fossil fuels than renewables between 2018 and 2020, according to a 2021 study by Oil Change International and Friends of the Earth U.S.

Erskine-Smith pointed to public dollars poured into the Trans Mountain pipeline expansion project and its latest cost increase. “I think, on all economic analyses, it's not going to be a worthwhile economic investment,” he said.

It is important to ask, “If we weren't spending money on this, what could we spend the money on otherwise?” said Erskine-Smith.

The four MPs responded to prompts from moderator Eddy Pérez from Climate Action Network Canada, but many also answered questions in the Zoom webinar chat.

One viewer wanted to know Erskine-Smith’s honest thoughts on Bay du Nord’s approval and he obliged.

“… It is a problem to approve new fossil fuel projects unless there is a clear articulation of how they will fit within the declining [oil and gas] cap that we’ve committed to (but which is not yet realized),” he wrote in the chat.

Bloc Québécois MP Monique Pauzé participated in the discussion in French. No live translation was available.

Collins and Morrice added that proportional representation would yield better results than the current first-past-the-post voting system, given that recent polls indicate most Canadians want governments to do more for climate action.

“You're seeing Parliament play out as well as it can under first-past-the-post,” said Morrice, in reference to the strong commitments to dental care and pharmacare. He encouraged people disillusioned about climate action to put their efforts towards switching to proportional representation.

Morrice said forums like this, where he and Erskine-Smith can “disagree respectfully,” will “help us make more progress more quickly.”

“I'm encouraged by conversations like these when we can come together to try to find strategies for ways forward.”

Forestry practices have killed up to 104 million birds in the Maritimes since 1985, study finds

IMHO, the future promise of

IMHO, the future promise of CCUS amounts to little more than trading a cow for some magic beans. The oil and gas industry has been singing the praises of CCUS since, what, the mid-90’s? And where exactly are they now with this technological silver bullet in terms of deployment? Time to stop kicking the can down the road.

It's not actually as good as

It's not actually as good as that. The magic beans thing worked out pretty well for Jack; unfortunately, we're not dealing with that one in a million con artist whose beans are actually magic.

I'm encouraged by this town

I'm encouraged by this town hall of progressives meeting without the millstone conservatives because clearly it's what's needed to move forward. Liberal obfuscations and rationalizations aside (infuriating though they undoubtedly are) they are very much open to and present at meetings like this, and the coalition with the NDP can also be seen as a foot in the door that not only representats the actual progressive majority in Canada that wants much more action on climate change NOW, it's the kind of incremental change that is simply more realistic than changing the whole system to proportional representation.

The Trudeau Liberals are

The Trudeau Liberals are banking on the NDP not pulling the plug on their minority government over climate policy negligence, irrespective of their joint supply and confidence agreement. Too bad the NDP agree with that tactic, being in an uncomfortable electoral and financial position with no reserves in courage to do otherwise, and therein in no position to rework the agreement that is clearly in Justin "watch my lips, ignore the rest" Trudeau's favour.

This is the sad state of affairs in Canadian federal politics today.