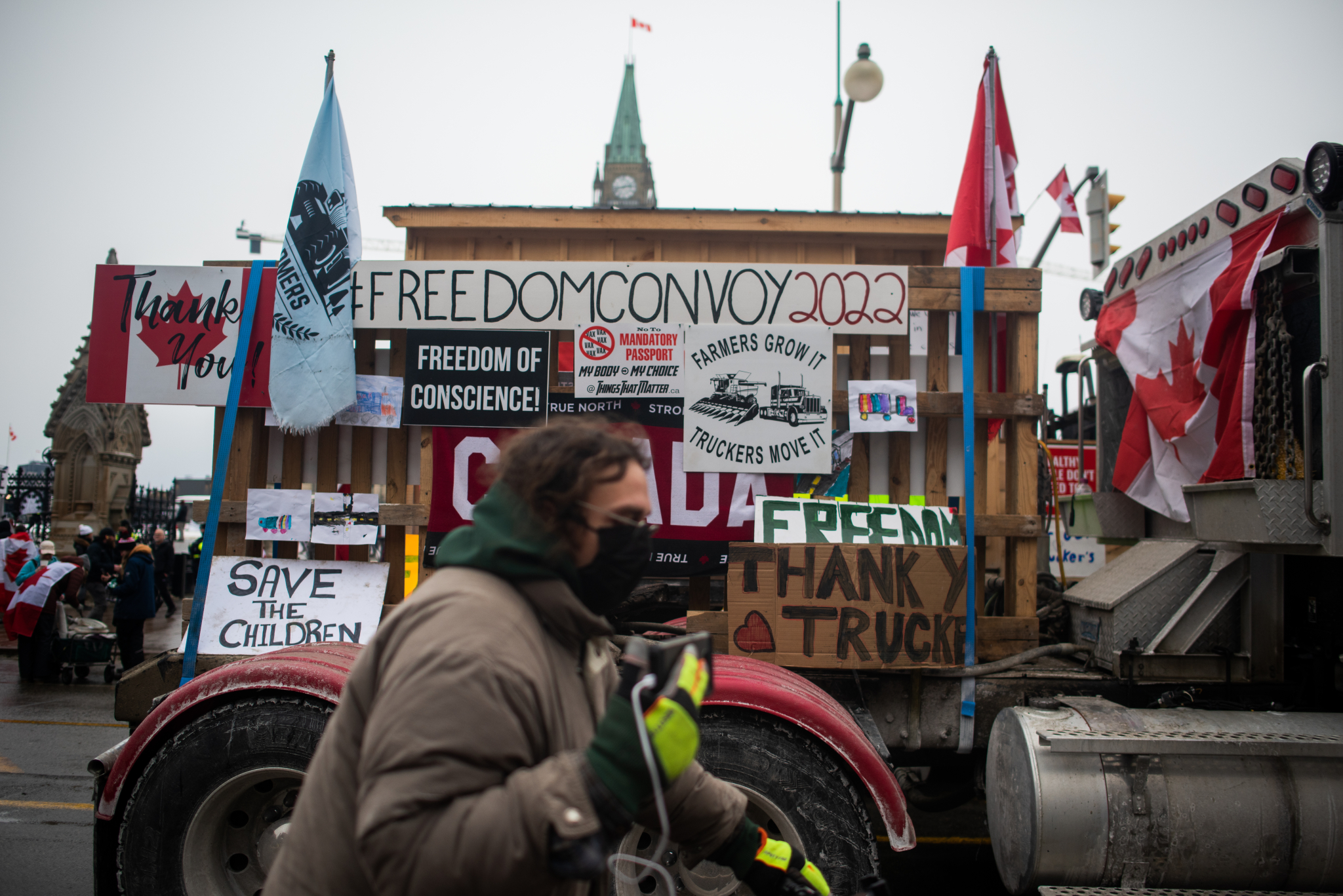 At the tail end of the so-called “freedom convoy,” Natural Resources Canada invited employees to talk about how the nearly month-long protest against public health measures affected them, according to documents Canada’s National Observer obtained through an access-to-information request.

The department confirmed that on Feb. 15, over 200 employees took part in the virtual meeting with the promise it would be “a private, safe forum for discussion” and everything shared would remain confidential.

Symbols of hate, including Confederate and Nazi flags, were captured on media broadcasts of the protest and particularly affected Indigenous, Black and other racialized people, the Jewish community and the 2SLGBTQIA+ community, the safe space invitation noted.

The protesters’ incessant honking and “taunting” disturbed people who live in Ottawa’s downtown and made many afraid to walk in the streets, it added.

In an emailed statement, Natural Resources Canada told Canada’s National Observer that: “Employees affected by the events of the convoy wanted a medium through which they could process and express how they were feeling.”

Participants were encouraged to share their stories and experiences at this one-time, department driven-initiative organized by the Office for Equity, Diversity and Inclusion and employee equity networks, the statement said.

Employees indicated “having an open and secure forum to connect helps them feel heard, respected, understood, and overall, fosters a sense of community,” it added.

Some participants were members of the Professional Institute of the Public Service of Canada (PIPSC), which represents more than 60,000 scientists and professionals employed at the federal, provincial and territorial levels of government.

PIPSC members who took part reportedly told their elected union representative “they appreciated the session, because the speakers and the conversation were good and respectful,” PIPSC president Jennifer Carr told Canada’s National Observer.

“The exercise was helpful because it helped ease the stress and tension,” she added.

At the tail end of the freedom convoy, @NRCan invited employees to talk about how the nearly month-long protest against public health measures affected them, according to documents Canada’s National Observer obtained through an ATIP. #cdnpoli #COVID

The department’s use of safe spaces to support employees is a welcome development.

Based on her conversation with the department’s elected union representative Ann Therriault, Carr said the department was doing “poorly on human rights and diversity issues” in the early 2000s and created equity networks to improve.

“They're not the only department or agency [that] has created those networks. But this one seems (like) it's really paying off,” said Carr.

She said while Natural Resources Canada is “not perfect,” PIPSC hopes other departments and agencies take a page out of its book and make use of safe spaces.

A few days before the convoy session, the department updated its Occupational Health and Safety policy, as is required every three years, according to a different document Canada’s National Observer obtained through an access-to-information request.

“Safe spaces are really good for mental health and equity,” said Carr, adding it's great to see the department “walking the talk” and creating forums for people to have tough conversations and verbalize how they feel.

Employees could also benefit from safe space sessions on distressing situations, such as the war in Ukraine, COVID-19, or high-profile upsetting news like Derek Chauvin’s murder of George Floyd in 2020, she said.

“You've got to start somewhere and having those open and frank discussions are good for the community,” said Carr.

Could anyone enlighten me?

Could anyone enlighten me? What effects to which government employees? And where was the discrimination? I really and truly do not understand this need to share the "effects" of a Freedom Convoy.