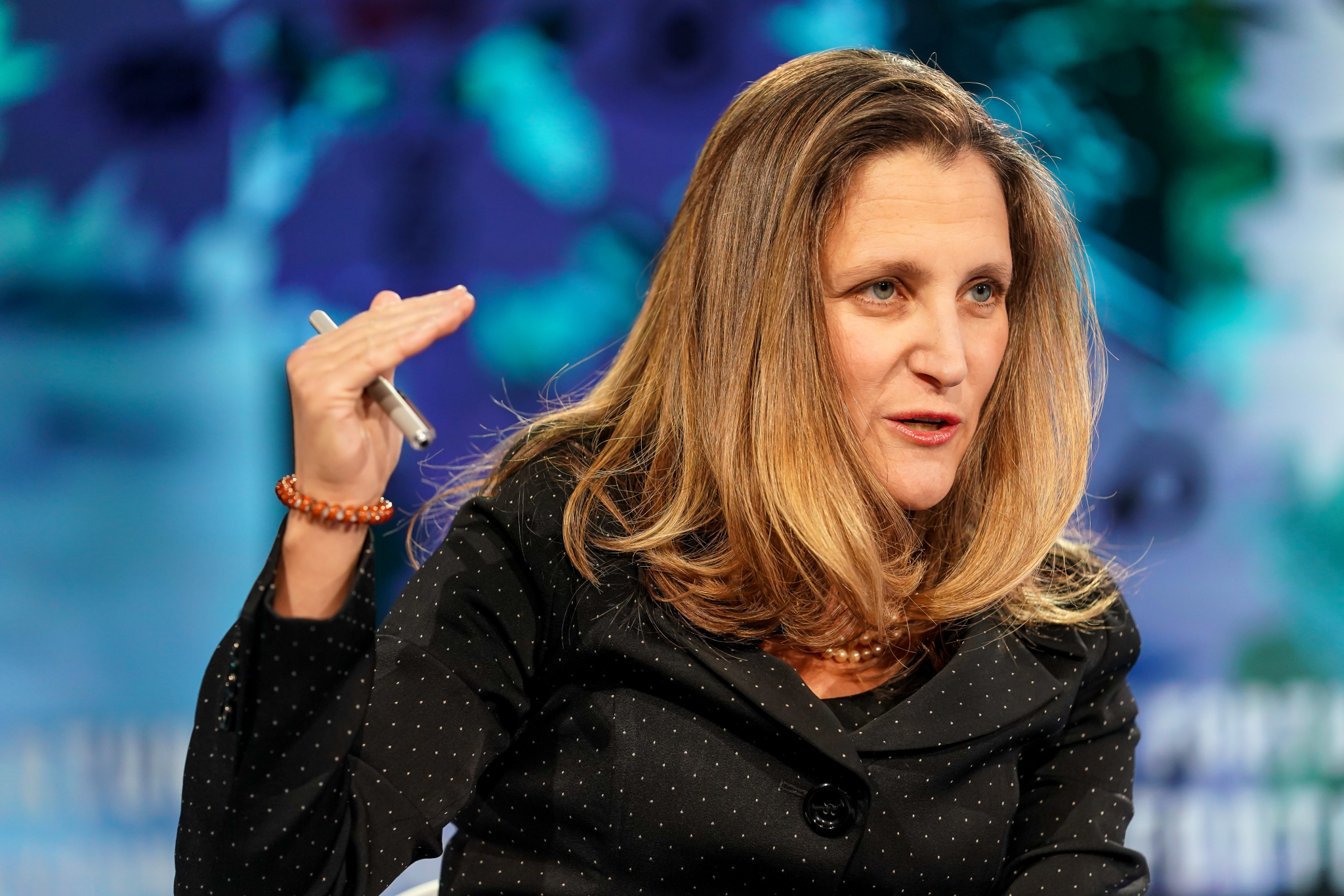 MPs fired scathing remarks at Finance Minister Chrystia Freeland on Thursday over the federal government’s decision to put $10 billion in taxpayer dollars on the line to finance the Trans Mountain pipeline expansion project.

On April 29, the government approved a $10-billion loan guarantee to help find unnamed third-party financiers for the project, which means if Trans Mountain defaults on its payments, taxpayers will pick up the tab.

When the estimated cost of TMX rose by 70 per cent in February, Freeland assured Canadians the project would receive no more public dollars. While it's true the government isn’t directly handing out any cash, it is still asking taxpayers to take on the risk, Tom Sanzillo, director of financial analysis with the Institute for Energy Economic and Financial Analysis (IEEFA), told Canada’s National Observer.

“(The Liberals) say it's a loan guarantee, but we’re not fooled: it's nothing more than a subsidy in disguise,” Bloc Québécois MP Alain Therrien stated in the House. “They’re trying to hide the fact that they’re financing their beautiful, gold-plated pipeline with more and more of our money.

“When will the government stop taking our money to finance Trans Mountain? At some point, there has to be a damn limit.”

In response, Freeland called the project “a responsible investment in the public interest,” adding it “has created over 12,700 well-paying jobs for the middle class.” The federal government intends to sell the pipeline when it is further along and “less risky,” she said.

The issue was broached again by NDP MPs Laurel Collins and Charlie Angus, who called the project a “financial boondoggle” and a “carbon bomb,” respectively.

Earlier this year, Canada’s financial watchdog confirmed the government should expect to lose money on TMX, but despite this, the Liberals are “putting even more public dollars on the line,” Collins said.

In response to Collins’ statement and others, Freeland repeatedly said it's important to get a fair price for Canada’s resources on international markets.

MPs fired scathing remarks at @cafreeland on Thursday over the federal government’s decision to put $10 billion in taxpayer dollars on the line to finance the Trans Mountain pipeline expansion project. #cdnpoli #TMX

A Finance Canada news release says the loan guarantee does not reflect any new public spending and noted the corporation receiving the guarantee will pay an unspecified fee to the government. The current cost estimate — $21.4 billion — and expected completion date of September 2023 — will not be affected, it reads.

He was not surprised the government approved the loan guarantee.

“I don't think they thought it would have cost them as much as it has, but they're not backing down now,” Angus told Canada’s National Observer in an interview. “Their focus is oil production, not the climate crisis.

“This is backstopped by the Canadian people,” he said. “And there is no business case for TMX. This is about the public building the infrastructure, taking the risk, to help out massively profitable companies [that] have no intention of doing their part to decarbonize or to even clean up their own mess.”

He said the project cannot continue in any capacity unless the government can prove it is not “vastly increasing oil production.”

The loan guarantee announcement is “deeply disappointing,” particularly because it coincides with “climate-fuelled flooding ravaging multiple parts of the country,” Green MP Mike Morrice said in an interview with Canada’s National Observer. People in parts of the Northwest Territories, Manitoba, Alberta and Ontario have had to evacuate their homes in recent days.

“It's hard to keep track of all the tens of billions we've thrown at this expansion project, one that we know is both economically and ecologically a failure,” said Morrice. A reported $17.3 billion has been spent on TMX as of Sept. 30, according to the IEEFA. This includes the $4.7 billion it cost to acquire the project in 2018.

If the purchase price and construction costs of the project — totalling $26.1 billion — were invested in renewables, every major wind and solar project in Canada from the last two years could have been fully funded five times over, according to the IEEFA report.

“Immediately stop work on the pipeline expansion, and redirect those same tools, machinery and workers from the Crown corporation to support community-based climate adaptation and resiliency projects.”

Freeland claims the TMX project "has created over 12,700 well-paying jobs for the middle class."

Paying workers $21.4 billion to transfer a mountain of sand from Alberta to B.C. with teaspoons would also create over 12,700 well-paying jobs for the middle class.
While utterly pointless, at least the project would not contribute to climate disaster. Neither would it contaminate waterways and water supplies. Or increase ship traffic in the habitat of endangered whales.
Unlike TMX.

The Trans Mtn expansion promises 50 permanent new jobs in BC and 40 in AB.
Freeland is looking at only one side of the balance sheet. Are fossil-fuel jobs the only jobs worth protecting?
How many jobs are imperilled by climate change and oil spills?
Climate change impacts already cause huge economic damage and imperil jobs in many industries -- from forestry to fisheries, from farms to wineries to ski-hills. And not just jobs, but entire towns. Even ecosystems.

Huge opportunity costs:
"Canadian jobs in renewable energy had already surpassed jobs in the oil sands back in 2014. That's before the downturn in the oil sector, and before the continued growth in development and jobs in clean energy."
"Why do we listen to oil execs when they talk about jobs?" (National Observer, Sep 5th 2018)
• https://www.nationalobserver.com/2018/09/05/opinion/why-do-we-listen-oil...
*
"Making a less energy intensive Alberta can create many jobs. Out of 56 economic sectors, oil and natural gas extraction are dead last in job creation — a measly 3.5 jobs for every $1 million invested."
"Alberta needs a low-carbon plan" (Rabble)
*
Nearly 300,000 Canadians were directly employed in clean energy in 2017 — nearly 100,000 more than in mining, quarrying, and oil-and-gas extraction.
"Clean energy one of Canada's fastest-growing industries" (CP 2019)
*
"Job killer or job creator? Experts predict a climate employment boom" (CBC)
"Solar Employs More People In U.S. Electricity Generation Than Oil, Coal And Gas Combined" (Forbes)
Clean energy employment in the U.S. exceeds fossil fuel jobs nearly three-fold.
"Massive Job Counts Show Renewables, Efficiency Taking Hold in 'Every U.S. Zip Code'" (The Energy Mix)
If renewables can create jobs in Republican states, they can create jobs anywhere — even in Alberta.

And the NDP will continue to

And the NDP will continue to support the Liberals, climate be damned?

But at least people like Charlie Angus are finally piping up with effective criticism. Still, supporting Trudeau and Freeland politically needs to be put to Angus directly in light of this "jobs" bullshit while the West alternates between burning and flooding.

Is there a real Green Party

Is there a real Green Party out there, one that will not run fake candidates or be such self centred egotists at the top that infighting reigns and negotiation with the NDP over vote splitting in competitive ridings is impossible?

>> If the purchase price and

>> If the purchase price and construction costs of the project — totalling $26.1 billion — were invested in renewables, every major wind and solar project in Canada from the last two years could have been fully funded five times over, according to the IEEFA report. <<

Building out solar and wind projects at double the current rate coupled with building a federal smart grid corridor with industrial-scale banks of batteries and lots of interties with cities and at borders (provincial and international) will create orders of magnitude more jobs than the 12,000+ claimed by Freeland for one "gold-plated" pipe. And that's just in Alberta.

TMX, jobs and overseas market prices all combined in the same sentence seem to end up repeating the stale, tired old disinformation long ago exposed and dismantled by knowledgable commentors. The long term jobs are limited to two digits, maybe three at best. There are no Asian buyers waiting anxiously to pay premium prices for an inferior product -- with transoceanic shipping costs tacked on top. The most likely buyer will be the same old USA (but through coastal California) that is happy to pay a fair price for a poor quality feedstock (CAPP prefers to misdefine that as a "discount"), one where they are set up for the necessary extra steps in refining in the US creating US jobs to make much higher priced finished products for US consumers with a gigantic, self-inflicted price differential from the original raw Canadian bitumen.

Hewers of wood, drawers of water and pumpers of raw oil. That has been the Canadian way since centuries before confederation.

There was never any question

There was never any question that this was just a bribe for the oil and gas industry to stop complaining.

I can't tell whether it was a bribe to the *industry*, in which case, what did they get from industry, exactly? If it was intended to mollify the *voters* by showing support for the industry that employs them, man, it failed miserably.

Back in 1957/58, Prime Minister St. Laurent guaranteed financing of the pipeline from Alberta to Eastern Canada, via an all Canadian route through the Canadian Shield. For national security reasons, vs using the shorter less expensive route through Michigan. (Presently called Line5).
American financiers refused finance because of the higher cost of keeping it Canada. Progressive Conservatives went crazy that our government would dare guarantee such financing.  And the Liberals lost the election to Conservative John Diefenbaker, who self destructed in short order.
Did that guarantee cost taxpayers?  Nope. Did that pipeline get built and make Alberta rich from natural gas sales? Yes. Today it is TransCanada Pipelines, one of the largest oil infrastructure companies in North America. And is Alberta still providing gas to the East, and getting rich from that simple guarantee? So Freeland sees this guarantee as similar while the predictable Conservatives have their shorts in a knot. So typical! Alberta has wanted a pipeline to tidewater, here it comes. Yet our Conservatives are predictable in their objections! Albertans should realize this simple reality.