By Barry Saxifrage | Analysis, Climate Solutions Reporting | May 17th 2022
#2002 of 2165 articles from the Special Report: Race to a Safer World 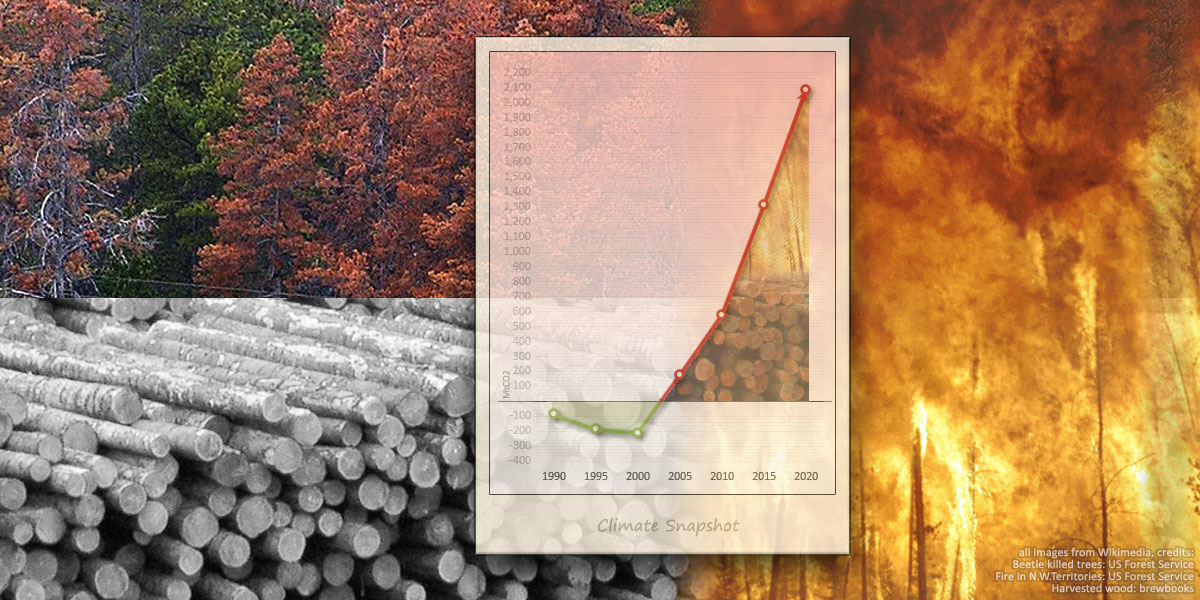 Canada's forests are being logging faster than they can grow back and are spewing CO2 into our already destabilized climate. Images via Wikimedia Commons, illustration by Barry Saxifrage
Previous story
Next story

For the last two decades, Canada's managed forest lands have been logged faster than they have grown back. This imbalance has created a huge — and rapidly rising — new source of carbon dioxide (CO2) pouring into our already destabilized climate.

My first chart shows these two parts and how they've changed decade by decade. 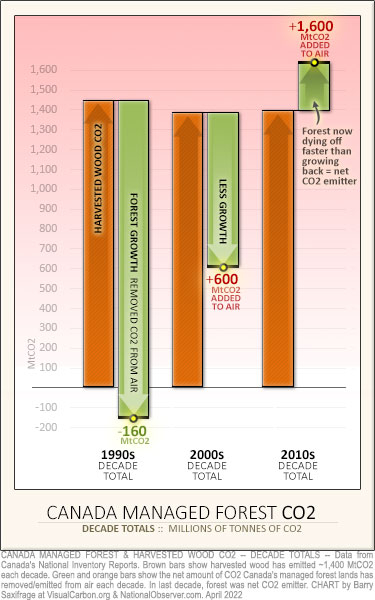 Harvested wood CO2 is shown by the orange bars. These emissions have remained business-as-usual high, at around 1,400 million tonnes of CO2 (MtCO2) every decade.

For scale, this is one of the largest sources of CO2 in Canada's economy, far exceeding emissions from passenger vehicles, buildings or electricity generation.

The second part of the equation is forest CO2. It's shown by the green bars. This is the net CO2 balance from many processes. New growth pulls CO2 out of the air, while many forms of decay, plus wildfires, emit CO2 back into the air.

Back in the 1990s, new growth was winning out, and the forest was able to remove more CO2 from the air than harvested wood was emitting. That's shown on the chart by the green bar descending even more than the orange bar rose in that decade. This led many people to view wood as carbon-neutral.

But during the 2000s, new growth declined, while tree death, decay and wildfire increased. As a result, the forest only removed half as much CO2 from the atmosphere. Logging, however, and thus harvested wood CO2, stayed high. This mismatch pumped 600 MtCO2 into the atmosphere over that decade.

During the 2010s, forest growth continued to falter, while death, decay and wildfire continued to surge. The huge, and hugely valuable, carbon sink at the heart of Canada's managed forest lands completely vanished — and the forest flipped to become a net carbon source, emitting CO2. That's shown on the chart by the green forest-growth bar heading upwards in that decade — adding CO2 to the air instead of removing it.

During this decade, harvested wood continued to emit 1,400 MtCO2 while the forest now emitted 200 MtCO2 on top of that. The atmosphere gained the combined total of 1,600 MtCO2.

My first chart showed decade totals. My next chart shows the running total since 1990. This view lets you see how the crisis has accelerated, unchecked.

Canada's forests are being logged faster than they can grow back and are spewing CO2 into our already destabilized climate, writes columnist @saxifrages. #Logging #CO2 #ClimateChange 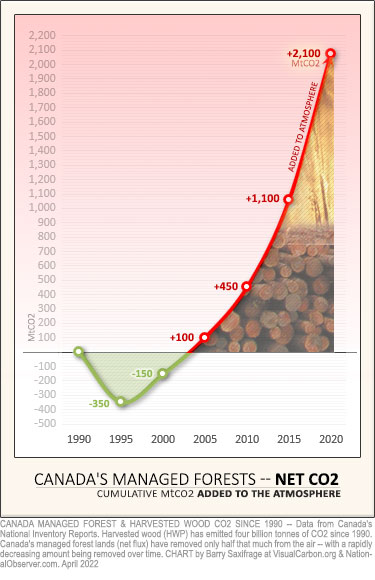 The downward start to the line shows that back in the early 1990s, Canada's managed forest removed more CO2 from the air than logged wood emitted. By 1995, a total of 350 MtCO2 had been removed from the atmosphere.

But then, around 1995, everything changed direction.

In every five-year span since 1995, logged wood emitted more CO2 than the forest took in. And as the chart shows, the amount added to the atmosphere continues to rocket upwards.

In total, more than 2,000 MtCO2 of forest carbon has piled up in the atmosphere since 1990. That's two billion tonnes of planet-warming and ocean-acidifying CO2 — more than 50 tonnes per Canadian.

Does this look like climate safe forestry to you? And is anyone responsible for slowing down this CO2 tsunami?

Under the default forest carbon accounting rules set up by the Intergovernmental Panel on Climate Change (IPCC), Canada would have to account for all the CO2 emissions arising from managed forests in balancing its forest carbon books. That would insure someone was responsible for reining in these emissions. Canada used to follow these IPCC rules.

In recent years, however, Canada has switched to its own forest carbon accounting rules, designed to ignore billions of tonnes of CO2 while deferring billions of tonnes more. Under its new carbon math, even business-as-usual logging in a managed forest that is hemorrhaging CO2 still pencils out as climate positive on paper. In fact, logging has been so incredibly climate positive — on paper — over the last couple of decades that Canada has awarded itself more than 100 MtCO2 worth of forest carbon credits for it.

Clearly, both the industry and the government are planning to continue unabated logging in Canada.

And just as clearly, that will mean the new flood of CO2 piling up in the atmosphere is going to continue unabated as well.

The climate, of course, doesn't pay attention to our pencil-and-paper forests. It blindly reacts to the amount of CO2 being added to it.

So, if like me, you're concerned by the huge scale and rapid pace of this new climate threat, tough luck.

Why does the United Nations

Why does the United Nations Framework Convention on Climate Change allows creative accounting on forest and forestry emissions?
Who will hold Canada to account for its blatant duplicity on this file?
Are other nations following Canada's lead?

The UNFCCC allows nations to

Barry Saxifrage | Tue, 05/17/2022 - 16:53
The UNFCCC allows nations to propose alternative carbon accounting for forestry. There is supposed to be a review process. According to a recent Washington Post article, Canada is starting to get push back on its forest carbon accounting. But, regardless of whether humans somewhere approve some accounting method or not, it won't change the climate response. As long as Canada allows harvested wood CO2 to be far greater than what the forest is re-absorbing, the climate crisis will intensify. What matters to the climate is the amount of CO2 piling up into the atmosphere.

In terms of 'creative accounting' the running totals in graph one are not a legitimate value and exaggerate the net change in CO2. Also, it is unclear from this discussion, and also from the papers referenced with links, whether the author is talking about CO2 generated by harvesting practices (HWP) vs. CO2 removed as harvested wood or the net CO2 released via harvested wood usage. Some of the latter constitutes a carbon sink, for example, wood locked up in house construction, vs. HWP e.g. CO2 produced from burning diesel or generating electricity to run mills during harvesting and further processing.
More clarity and a fair representation of facts would help with this discussion.

Data in the chart is what

Barry Saxifrage | Tue, 05/17/2022 - 16:44
Data in the chart is what government of Canada reports in its National Inventory Report to the UNFCCC. In this article's charts and discussion, the CO2 listed for harvested wood is the HWP value Canada reports. This uses "end of use" accounting which doesn't put wood CO2 on the books until the wood product is burned or is discarded at the end of its use. Canada formerly used the "when cut" accounting that put the CO2 on the books in the year the tree was harvested. More than two billion tonnes of harvested wood CO2 -- from wood still in use -- has not been put on the books yet. It will appear in future years for Canadians to deal with later.