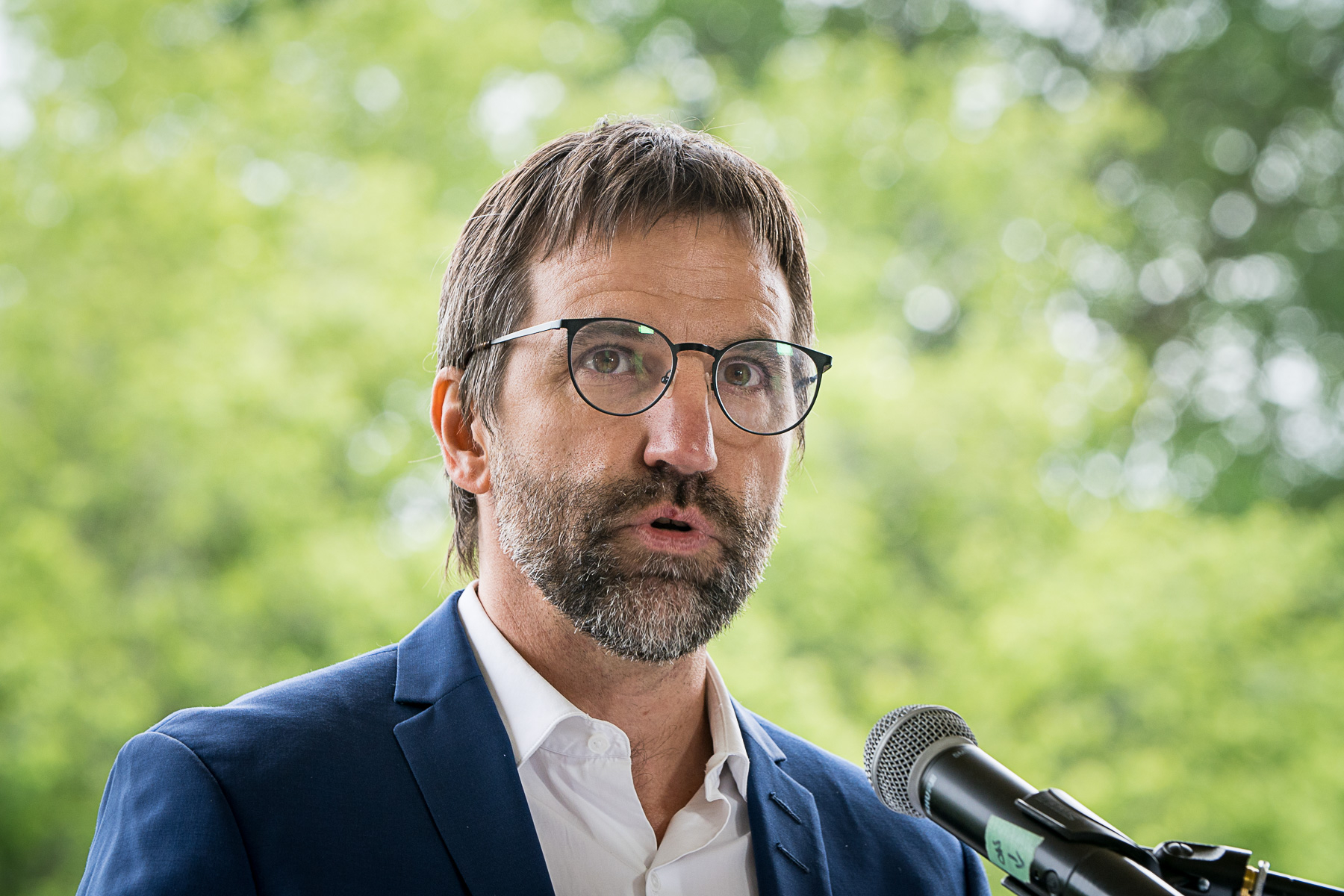 Over the coming weeks, Steven Guilbeault finds himself at the centre of international talks on climate finance. But until the country cuts its ties with fossil fuels will anyone listen? Photo by Josie Desmarais / Canada's National Observer
Previous story
Next story

Halfway between last year’s UN climate conference and this year’s meeting in Egypt, Environment and Climate Change Minister Steven Guilbeault is trying to thread the needle between Canada’s track record as the top fossil fuel financier in the G7 and its role delivering cash promised to developing countries for their energy transition.

On a phone call from Ghana, Guilbeault described a whirlwind European tour of meetings over the coming weeks where he intends to bring countries closer to an agreement on several climate finance issues like carbon pricing, paying for loss and damage and convincing rich nations to provide the $100 billion a year they promised to developing countries over a decade ago.

In international climate finance, there are three big conversations underway. Mitigation financing aims to bring down planet-warming greenhouse gas emissions by investing in things like wind farms to displace coal power. Adaptation money will help countries brace for dangers already locked in by climate change, like building seawalls to prevent rising waters from creeping into coastal cities. And finally, loss and damage financing will pay for damage caused by climate change, such as wildfires or floods that could destroy everything from physical infrastructure to the value of crops.

This last conversation has been the most contentious, as rich nations — historically, the most responsible for causing climate change — have been reluctant to commit to compensating the developing countries often most impacted by the crisis.

Canada is open to discussions on loss and damage, Guilbeault said in an interview with Canada’s National Observer. Moreover, he thinks he’s found a way to navigate this incredibly tense diplomatic problem.

The tension stems from rich countries’ broken promise to provide climate finance to developing countries to pull off the energy transition — a promise critical to signing the Paris Agreement in 2015. Though wealthy nations initially pledged to provide US$100 billion annually by 2020, they aren’t expected to meet that target until 2023 at the earliest. This is why climate finance is such a hotly debated topic in climate diplomacy today — trust has been broken at the same time countries around the world are recognizing the price tag will have to increase from billions to trillions in the coming years if there is any hope of meeting the Paris Agreement’s goal of holding global warming to as close to 1.5 C as possible.

While progress is being made to scale up mitigation and adaptation financing, the discussion around loss and damage is lagging after the United States and the European Union spiked an agreement led by China and the G77 at COP26. The concern for wealthy countries boils down to liabilities: if they sign an agreement to compensate others for climate havoc, rich countries fear they could open themselves up to expensive legal battles.

For Guilbeault, overcoming the liability question is the space for negotiation.

“I cannot in good conscience put Canadian taxpayers at liability risks that could be limitless,” he said.

Canada is open to discussions on loss and damage, @s_guilbeault said in an interview with Canada’s National Observer. Moreover, he thinks he’s found a way to navigate this incredibly tense diplomatic problem.

He said he is hoping to use these meetings to explore what loss and damage agreements could look like. Inevitably, it will be a two-pronged discussion. On the technical side, negotiators and experts will hash out how exactly this agreement could work. On the political side, the conversation will be driven by developing countries whose very existence is threatened by climate change. Pacific Small Island Developing States like Tuvalu or Vanuatu, for example, are at dire risk of sea-level rise and need resources to avoid drowning. In a statement last year, the Marshall Islands said it needs the help of developed countries, “particularly those that have contributed the most to the crisis” to put money on the table now.

“We will never accept that anthropogenic climate change — which we did not cause — be the basis for a loss of our sovereignty, our sovereign rights, or our maritime boundaries,” the statement read.

It remains to be seen where discussions will land on loss and damage, but the other important file to watch is progress in delivering the $100-billion promise. As of 2019, the most recent publicly available data, climate finance provided to developing countries fell just shy of $80 billion. Last year, Canada and Germany were tapped to help close the gap, and the two countries are now working on an updated delivery plan after providing what amounted to an IOU in the weeks leading up to COP26.

Climate Action Network Canada’s international climate diplomacy manager Eddy Pérez said Canada and Germany are committed to an enhanced version of last year’s delivery plan that would be used to nudge governments, like the United States, to increase their funding. Moreover, there is an underappreciated connection between the two countries' climate leads that is changing the tenor of international discussions. For a decade, Guilbeault worked with Greenpeace, and as of February, Germany’s climate envoy is Jennifer Morgan, the former head of Greenpeace International.

“Both in positions of power (are) creating a dynamic duo on climate finance ambition, and it's putting Canada at the heart of making sure rich nations actually are accountable for their obligations,” he said.

Pérez called the enhanced delivery plan an opportunity for Canada to lead climate finance discussions. He applauded the country for increasing its financing goals last year but said ultimately, “Canada's financial story is one of two faces.”

That’s because Canada remains one of the top financiers of fossil fuels worldwide. An analysis from Oil Change International and Friends of the Earth U.S. found Canada perched at the top of the list of fossil fuel financers in the G20. From 2018 to 2020, G20 countries provided at least US$63 billion per year to the fossil fuel industry. Over that same period, Canada gave at least $11 billion (about C$13.6 billion) to the oil and gas sector, mostly through Export Development Canada, representing nearly 20 per cent of the G20 total.

“We have this (one) face at this moment where we're actually at the heart of a discussion to build up momentum for climate finance, but then we also have the dark side of that story, which is the role Crown corporations, our private financial sector, our banking sector (are) playing in fuelling this crisis,” said Pérez. “Unless we're able to change that story, unless we're able to move away from these two faces, unfortunately, that is always going to impact our legacy in a negative way.”

Guilbeault said Canada is still committed to phasing out fossil fuel subsidies by 2023, and Finance Minister Chrystia Freeland’s mandate letter calls on her to phase out public financing of fossil fuels by Crown corporations, too. Still, public money continues to flow to the oil and gas sector.

This headline was changed to reflect Guilbeault's view that we need to move away from 'loss and damages' when talking about how to help developing nations deal with climate change.

Canada is adding fuel to the

Canada is adding fuel to the fire. Instead of fund-raising for firehoses around the world, Environment Minister Steven Guilbeault should be putting the fire out at home.
Guilbeault continues to approve and fund new fires -- and funnel public dollars to the arsonists.