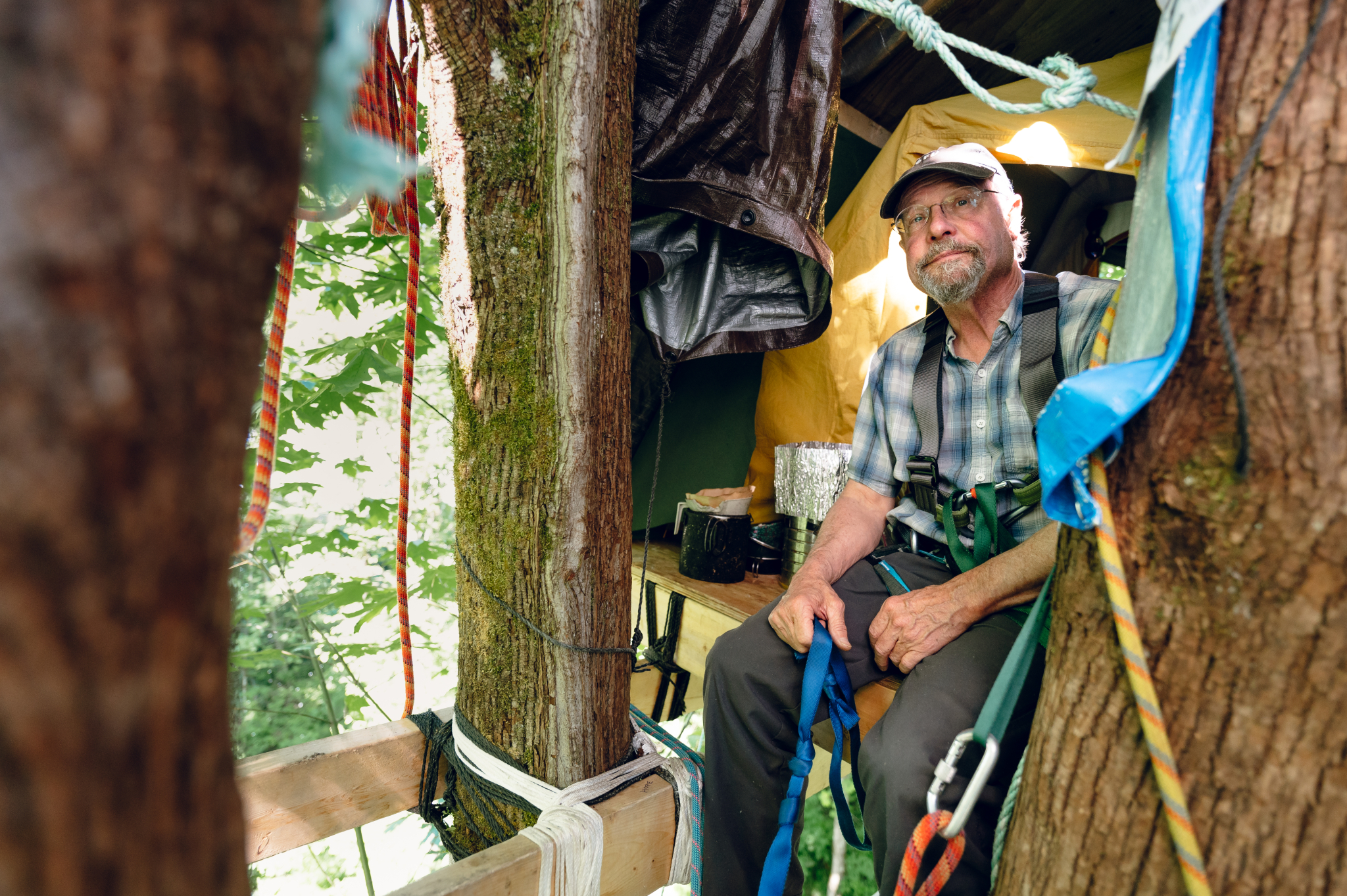 Dr. Tim Takaro was sentenced to 30 days on Wednesday, June 15, 2022 for taking part in a treesitting protest against the Trans Mountain pipeline expansion. Photo by Ian Harland
Previous story

Three days before being sentenced and ultimately jailed, retired doctor Tim Takaro reflected on events that led him to spend 16 months in a treehouse protesting the Trans Mountain pipeline expansion.

Since his days as a medical student at the University of North Carolina, when he joined Physicians for Social Responsibility, Takaro had been a public health advocate. He joined the International Physicians for the Prevention of Nuclear War, which won a Nobel Peace Prize in 1985.

On Wednesday, Takaro was sentenced to 30 days in jail by B.C. Supreme Court Justice Shelley Fitzpatrick for protesting TMX.

The treesit was his first act of civil disobedience, the 65-year-old Takaro said, noting he was hoping for community service rather than jail time because he has a heart condition.

As a physician, he felt it was important to uphold the Hippocratic Oath.

“I never thought I would do this, but the American Medical Association points out that ethical responsibilities usually exceed legal duties,” he said.

“Specifically, when a physician believes the law violates ethical values or is unjust, not only should we work to change the law, but in exceptional circumstances of unjust laws, ethical responsibilities supersede legal duties.”

Takaro made his way to Canada in 2005, where he taught at Simon Fraser University’s Faculty of Health Sciences while practising at Vancouver General Hospital.

At first, he tackled concerns with TMX through reports. He wrote two papers on the health impacts of the project for the National Energy Board, which he said were essentially ignored by the federal government of the day under Stephen Harper. At the time, the Health Officers Council of BC (HOC) “recognized that the health impacts assessment that had been done was inadequate,” said Takaro.

In April 2019, HOC passed a resolution calling for an independent, cumulative and comprehensive health impacts assessment of TMX.

Leading up to his sentencing, Tim Takaro reflected on the way #TMX violates Indigenous rights and the hypocrisy of upping oil and gas production when experts are urging us to do the exact opposite.

He said when that request was ignored, even after B.C. Premier John Horgan promised to “use every tool in the toolbox” to stop TMX, he decided he had to switch gears.

“I would say my career has not been one of activism, but one of science and study,” he said.

“And I exhausted all those routes and had my science ignored. And the whole process was rigged. And so that's what led me to nonviolent civil disobedience systems.”

The TMX pipeline, originally built in the 1950s, was taken over by Texas-based Kinder Morgan in 2015, which then made plans to triple the exports of the existing operation, upping production to 890,000 barrels each day flowing from Alberta to the B.C. coast. The federal government bought the pipeline in 2018 for $4.5 billion. Construction of the expansion is projected to cost $21.4 billion.

Others arrested for violating the injunction around the same time as Takaro have been sentenced to jail. Tsleil-Waututh Nation member and Burrard Inlet protector William George got 28 days in jail in May. Although he wasn’t arrested during the action, he was charged with criminal contempt in January 2021. The Tsleil-Waututh Nation said it was “frustrated and dismayed” with the judgment.

Leading up to his sentencing, Takaro reflected on the way TMX violates Indigenous rights and the hypocrisy of upping oil and gas production when experts are urging us to do the exact opposite. Last year’s heat dome in B.C. caused hundreds of sudden deaths, which he said many media outlets are neglecting to connect to climate change.

“I have two children, 23 and 25. And you know, obviously, I love them very much. And this devastation that we saw last year was just a harbinger of what's to come,” he said.

“And so a lot of this work we do is to try to reduce that risk. And I'm finding it incredibly frustrating.”

Future generations will thank scientists, environmentalists, and climate activists who defended their right to a stable climate and healthy planet.
Not much cheering for fossil-fuel boosters and industry-captured jurists who ignored the warnings.
Thanks, Tim Takaro, for standing on the right side of science and history.

Indeed, some in present

Indeed, some in present generations are already thanking them. Thanks, Dr. Takaro!

This is the kind of hypocrisy

This is the kind of hypocrisy from both the Federal and B.C. Government on the TMX pipeline over the years. It is shameful that a scientist and peaceful protester like Takaro and others are treated like criminals just for fighting for the environment and future generations. TMX is an unnecessary environmental disaster only to please Alberta

My heartfelt thanks, Tim

My heartfelt thanks, Tim Takaro.

Now, how do we change a legal system that allows corporations to make the judiciary and the police do their dirty work while "throwing the book" (aka jail time) at peaceful advocates for a safe and healthy future?

It's gotten to the point

It's gotten to the point where actions such as blocking roads are justified. Let's all go to jail.

I wonder how much

I wonder how much overcrowding of jails, how much clogging of the court dockets, how much cost to the taxpayers of prosecuting non violent "offenders" it will take to move the politicians and the corporate controlled judicial system to re-think their stupid intransigence. They keep making the same mistakes over and over expecting something to change. They have no idea how much energy is pent up - and building inexorably, among the people being victimized by predatory, untethered capitalism and its government lackeys

Disgusting our law system is

Disgusting our law system is in the pockets of dirty energy morons destroying our planet with legal assistance. Kudos to you Dr Tim Takaro, you are a hero to most of us Canadians, as we know that the government and their flunkies support offshore billionaires and Communist Dictatorial Regime's at the expense of our environment. Keep up the protest as you are on the right side of history, not the clowns subverting you.

I don’t know what else to say

I don’t know what else to say except ‘thank you’ Tim.
Dave

I'm sure the judge's actions are perfectly in accordance with the law--and that's the problem.

There is no sanity left in the "justice" system, as far as I've seen for several decades now. Any action designed to advance or protect humanity runs into laws and judgements designed to protect corporations, and/or the offender.

This could be changed, of course, but the changes would be massive, and there is clearly no political will to tackle this.

I despair for my grand-children, and their generation, and the world we have made, or gone along with.

Thank you so much, Dr. Takaro--and everyone else with integrity, and courage, who takes these issues on.