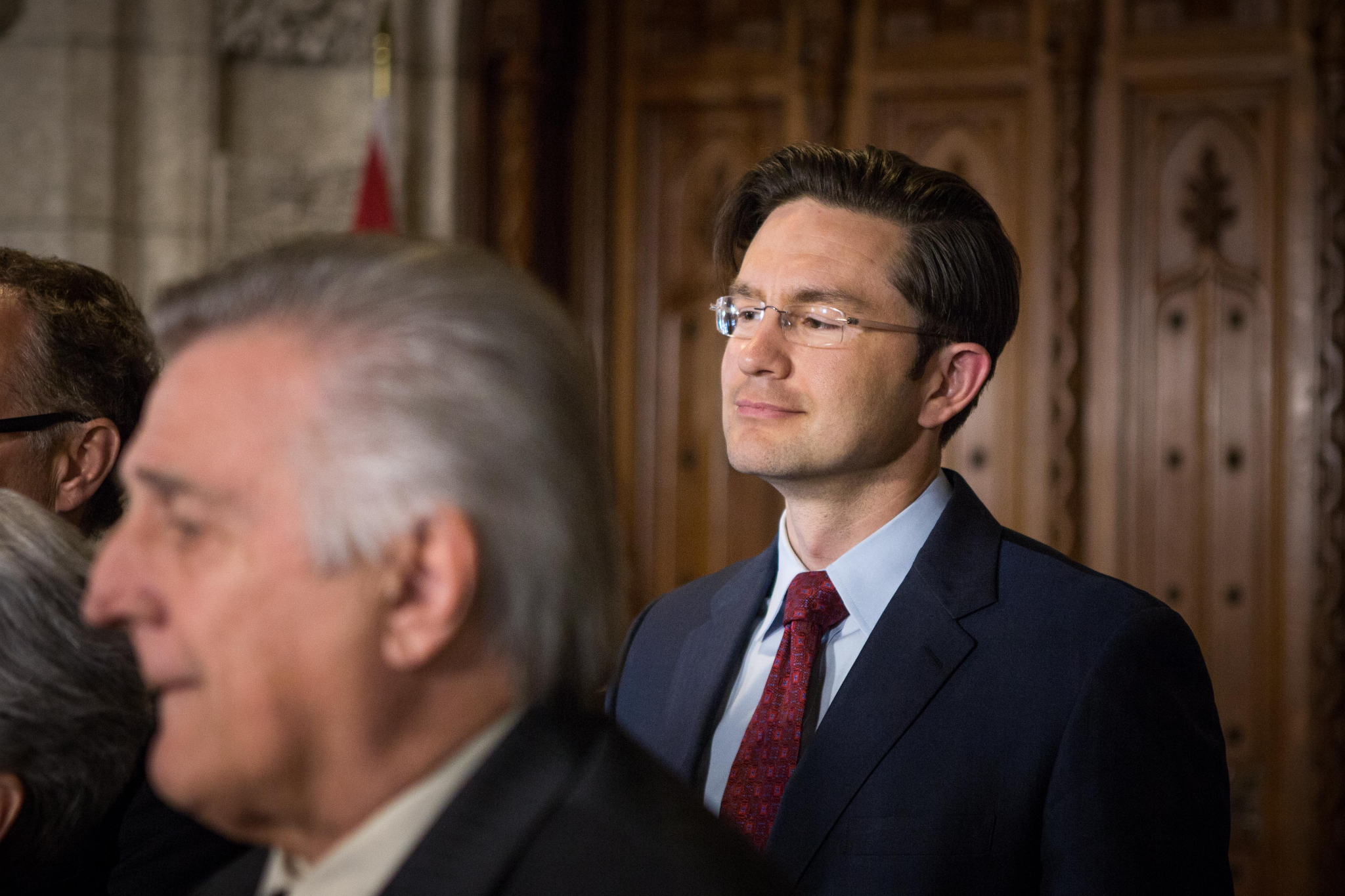 Far from being a store of wealth, Bitcoin and other cryptocurrencies have been an incinerator of it ever since Pierre Poilievre decided to embrace them, writes columnist Max Fawcett. File photo by Alex Tétreault
Previous story

What a difference three months can make. When Pierre Poilievre walked into a London shawarma shop on March 29 and paid for his meal with Bitcoin, it was just the latest in a string of populist political stunts to drum up support for his leadership campaign. But now, as global cryptocurrency markets continue to melt down, it’s starting to look much more like an albatross than an asset.

That meltdown has already cost crypto investors more than $2 trillion, and it’s claimed a growing roster of casualties ranging from multibillion-dollar hedge funds to the portfolios of thousands of smaller retail investors. But when Poilievre shot his video, he was pitching cryptocurrencies like Bitcoin as a way to “opt out” of the inflation he claimed the Bank of Canada had created.

If his supporters bought that pitch, and many surely did, they unwittingly opted into something else entirely: hyperinflation. Because of the collapse in cryptocurrency value over the last few months, that same shawarma would cost more than twice as much in Bitcoin as it did in late March (the loonie, by comparison, is down less than four per cent versus the U.S. dollar). That’s an effective annualized rate of inflation of over 400 per cent — the stuff of Weimar Germany or Zimbabwe.

Far from being a store of wealth, Bitcoin and other cryptocurrencies have been an incinerator of it ever since Poilievre decided to embrace them.

The problem with tilting at windmills is sometimes, the windmills tilt back. But while there’s plenty of schadenfreude to go around here, there’s also a lot of real financial pain among those who drank too much of the cryptocurrency Kool-Aid. And while you might think that pain would cause those who followed Poilievre’s advice to reconsider the merits of his candidacy, that doesn’t seem to be how it works.

That’s because of something known as the “backfire effect,” which causes people presented with information that invalidates their views to double-down on them instead of changing their minds. This mindset is particularly rampant among cryptocurrency investors, who have coined an acronym for this phenomenon: HODL (hold on for dear life).

The enduring strength of Donald Trump’s political brand in America speaks to just how strong this effect can be. For more than six years now, Americans have seen just how willing he is to lie, cheat or bully his way to the top. And yet, far from undermining his standing among his supporters, that growing mountain of evidence has made them even more loyal and fanatical in their support. Even Trump’s role in an attempted coup after the 2020 election, one that’s being detailed by the Jan. 6 committee, hasn’t broken the fever that still affects millions of Americans.

It’s unlikely Poilievre’s poorly timed embrace of cryptocurrency will do much to damage his political fortunes, either. He certainly isn’t about to change his mind here, in large part because he seems biologically incapable of changing his mind about anything. But it’s also because his attack on the Bank of Canada and his embrace of Bitcoin were always more about undermining institutions than helping people make money or mitigate the impact of inflation on their finances.

Cryptocurrencies evolved into a popular vehicle for financial speculation, but their origins lie in more libertarian circles. They serve as a powerful magnet for those with anti-government or anti-establishment views, and who believe central banks and “fiat” currencies are simply ways to separate people from their hard-earned wealth. “Bitcoin ideology bought into the entire Federal Reserve conspiracy package,” British author David Gerard wrote in his 2017 book Attack of the 50 Foot Blockchain. “The Fed is a plot to use inflation to steal value from the people and hand it to a shadowy cabal of elites who also control the government.”

Poilievre is no stranger to propagating conspiracy theories, given his enthusiastic (and ill-informed) attacks on the World Economic Forum. These sorts of attacks are only going to continue in the weeks and months ahead. Whether it's the Bank of Canada, the CBC or Elections Canada, Poilievre seems determined to erode whatever faith his supporters have in the institutions that bind our country together. Given his well-advertised disdain for elites and his inclination towards American-style politics, it’s not hard to imagine he will take a run at the Supreme Court of Canada at some point soon.

That’s what’s really at stake here: not the leadership of a political party, but the fate of our most important institutions.

If a political arsonist like Poilievre wins the CPC leadership race, he’ll have two years under the Liberal-NDP agreement to pound away at them. And even if he loses the next election, the damage he’ll do in the runup to it will linger. As Jason Stanley wrote in How Fascism Works, “What happens when conspiracy theories become the coin of politics, and mainstream media and educational institutions are discredited is that citizens no longer have a common reality that can serve as a background for democratic deliberation.”

This is the long game Poilievre is playing with Bitcoin and the Bank of Canada right now.

And while it may have cost his supporters some money, history suggests it won’t do much to weaken their support of him and his politics. That’s why it falls to the rest of us to speak out and stand up to this campaign against our institutions, even the ones we may not like very much.

If we don’t, the cost will be counted in a currency that’s far more important than dollars and cents.

Lessons from Canadian cities that cherish and protect greenspace

The ironic thing . . . hang on, there are several ironic things. So one is, Poilievre has nothing whatsoever against conspiracies by wealthy cabals; heck, he's part of one. It's called the "Conservative Party of Canada". Any bashing of the Word Economic Forum or the Bank of Canada is purely smokescreen--he has no actual problem with them, except maybe in the sense that the World Economic Forum folks haven't cut him in for any of the loot. But I'm sure if he gets to be Prime Minister of Canada, he'll be going to Davos and schmoozing and setting himself up for some graft, and any incautious words he might have said to gain advantage on the way to the Prime Minister's chair will be forgiven and forgotten.

Another ironic thing is that both the Bank of Canada and the US Federal Reserve are in fact, if you want to put it that way, conspirators to enrich the already wealthy, usually at the expense of the not-so-wealthy. Not that it's that level of formal, but the general position is clear. But they are generally doing exactly the opposite of what Poilievre and the Bitcoin idiots accuse them of. They HATE inflation and will crush the economy to get rid of it.

A note about inflation: Sure hyperinflation is terrible, but it doesn't happen by normal, moderate inflation spiraling out of control. It happens as a result of massive pressure on the economy, like massive international attacks on the country's currency and economy as in the case of Venezuela and Zimbabwe, or Germany's post World War I payments which were both massive and denominated in gold. They were trying to buy more gold than there was, more gold than the output of their economy represented, and the more gold they tried to buy, the more the gold producers charged for it, and the more they had to print more marks to pay for it, and the more it inflated. It wasn't a normal situation and it certainly wasn't caused by workers' wage demands. Moderate levels of inflation are a totally different thing and not that huge a deal; keeping it down needs to be balance with other economic considerations, like economic growth, unemployment levels, people's prosperity.

No matter what they may claim, the establishment, and by extension central banks, hate inflation far more than is warranted in terms of the general interest. Why? Because inflation is good for debtors and bad for creditors. Poor people and governments tend to be debtors, rich people, and particularly banks, tend to be creditors. I mean, say you have a mortgage for a million dollars and you're paid $50,000 a year. It's rather a lot. But say then inflation happens, 10% a year compounding, and pay on average keeps up, until in maybe 8 years you're making $100,000 a year. Suddenly your mortgage don't look so big no more, and the bank that holds it has a claim on much less of your income. So for the last 40 years plus, central bankers (who are generally, after all, bankers) have fought inflation by jacking up interest rates, triggering recessions, any time inflation got up to even like 3%, sometimes even 2%.

As to the World Economic Forum, of course it's a conspiracy--just not a SECRET conspiracy. I mean come on, it's an annual meeting of the richest and most powerful people in the world, for the EXPLICIT purpose of deciding how the world economy should go. What is that if not a conspiracy to (continue to) control the world? They just don't do weird baroque BS involving implanted microchips or engineered diseases or whatever. They're just trying to make sure wages stay low, profits stay high, capital stays mobile, unions are kept down, and so on.

Bang on; protecting our

Bang on; protecting our institutions, "even the ones we don't like very much" is key here. The large numbers of us who were behind the "Occupy" movement that foundered on totally wrong-headed and silly attitudes toward the importance of "leadership," DO still want the profound, baked-in inequality to be addressed by our governments. And this is the danger with the main conspiracy theory about the economic forum in Davos; there is some truth in the idea of corporate hegemony or "elites" having a stranglehold on everything that matters by virtue of owning it all.
But burning it all down, despite being the quintessential fever dream for juvenile libertarians, would likely lead to the anarchy, chaos and emerging fascism we now see in the States. The tribalism stoked by Boilievre mirrors what we see in sports where the "fans" are wild-eyed with painted faces, with fire, destruction and pitch-forks waiting in the wings.
And since the status quo is so boring, so formal, smug and repetitive, so "grim and unerotic," (a description of feminism that was no doubt a male observation), and because dissing it also means simply dismissing the deep fears associated with covid, climate change and women gaining more power, it's clearly compelling to many young right-wing men, their cheerleaders, and older ones lusting for their youth.
And the fact that it's all in their hot little hands embodied by their "smart" phones conjures a "brave new world." Proof that we are not rational as much as emotional. We can only hope that the time before an election will temper the insanity, and that the left wing figures out how to circle the wagons.