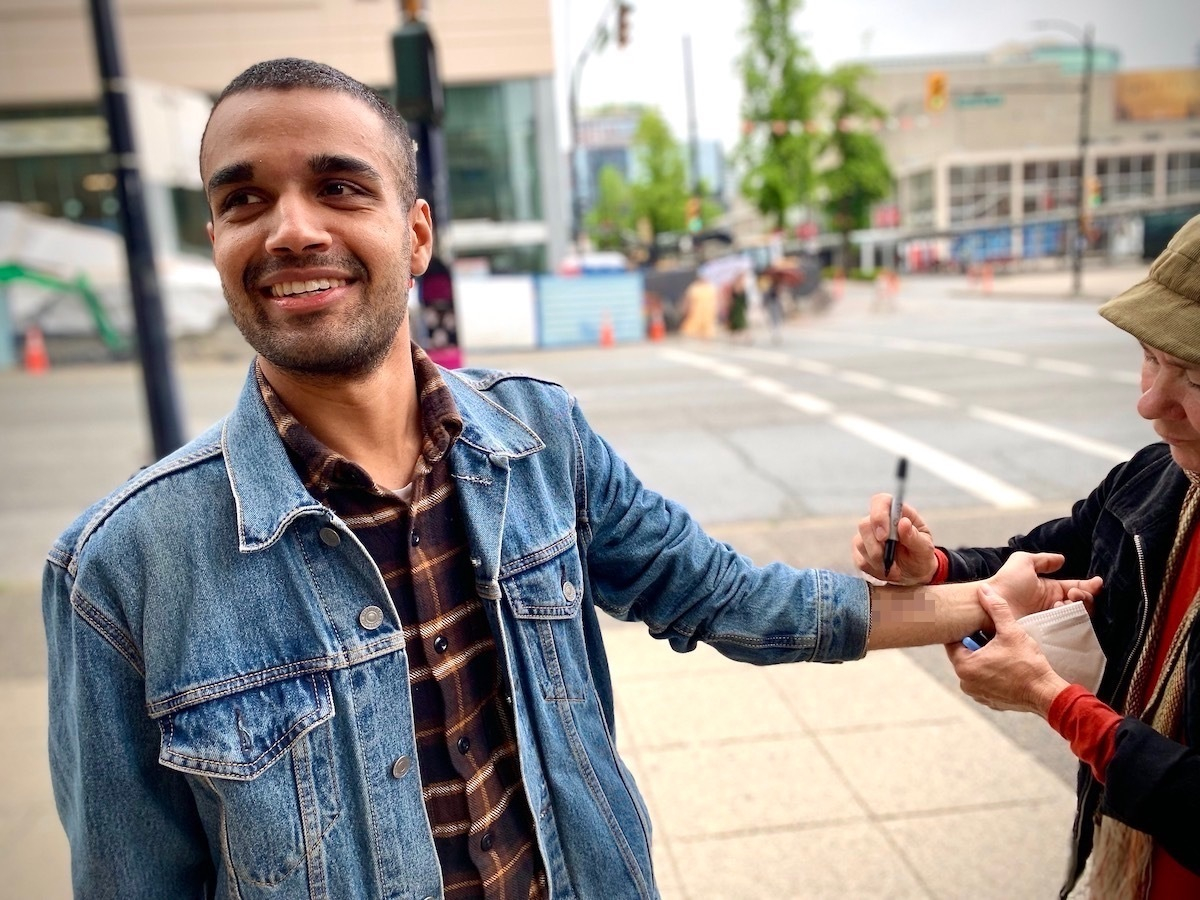 A friend writes a phone number (blurred) on Save Old Growth organizer Zain Haq's arm before he turns himself in to Canada Border Services on Tuesday. Photo by Rochelle Baker / Canada's National Observer
Previous story
Next story

A friend of Save Old Growth organizer Zain Haq wrote her phone number on his arm with a black Sharpie just in case he was allowed to make a phone call if he was detained Tuesday by the Canada Border Services Agency.

It turned out to be a necessary move.

Haq — an international student leading a civil resistance campaign to end old-growth logging in B.C. — was taken into custody in Vancouver and moved to an immigration holding centre in Surrey where he’ll remain until at least Thursday when he has a hearing scheduled, said SOG spokesperson Ian Weber.

No details are available yet on the reasons why CBSA took Haq into custody, Weber said.

The 21-year-old from Pakistan turned himself over to the border agency after it issued an arrest warrant for the co-founder of the protest group.

A third-year history major at Simon Fraser University, Haq is in Canada on a study permit, a document issued by Immigration Canada that is conditional on obeying the law and the absence of a criminal record.

When he got a summons from CBSA last week, Haq feared the border agency intended to deport him because of his activist work.

He has been arrested 10 times in connection with various climate protests over the past two years, and was recently jailed for two weeks in mid-February for criminal contempt of court after disobeying a court injunction involving the Trans Mountain pipeline expansion (TMX). He is also currently facing five charges of mischief.

Before attending the border agency’s offices in the company of his lawyer Randall Cohn, Haq told Canada’s National Observer he was nervous but OK.

“This could go any of 10 different ways,” he said, adding he didn’t answer the summons until he had a lawyer.

International student and #SaveOldGrowth organizer Zain Haq surrendered to CBSA on Tuesday and will remain in detention until at least Thursday when a hearing is scheduled. #BCpoli #OldGrowth

“I do intend to fully co-operate. I was simply trying to get the appropriate legal counsel,” he said.

Haq was optimistic the SOG movement would continue if he is deported. “It should never be dependent on one person,” he said.

Neither Haq nor Cohn were prepared to make any additional comments before the meeting with CBSA.

A worried posse of friends accompanied Haq to the doorway of the office tower on West Georgia Street and gave him hugs before he entered the building.

Friend Brent Eichler said the group's presence illustrates how the young student leader is loved and respected for his climate change activism.

“He’s sacrificing himself for the good of our planet,” Eichler said.

“He's doing what a citizen really needs to do, which is step up … no matter what the costs.”

Eichler wasn’t optimistic about Haq’s chances of being able to stay in Canada.

“I think that the state will do what it has done to land protectors all over the world — which is punish them — while it rewards those who destroy (the planet).”

SOG is behind a series of contentious protests that include highway blockades across the province, dumping manure at Premier John Horgan’s office and shirtless members disrupting an international soccer game in Vancouver.

Haq and other organizers with the protest group have said putting themselves in physical danger and risking criminal charges and jail time is the only way to get government and society to address the advancing climate catastrophe.

The international student is not the only activist with the group paying a heavy price for engaging in acts of civil resistance.

SOG protester Trevor Mckelvie’s required hip surgery when he fell from a ladder soon after an angry motorist interfered with its support structure at a roadblock on Vancouver Island on June 13.

Mckelvie, expected to face a year of rehabilitation, issued a statement Monday saying he doesn’t regret his decision to engage in the protest to protect B.C.’s remaining old-growth forests.

“I’m not happy this happened to me but I'm happy that it was for a cause as important as this one,” he said on Facebook.

He understands the group’s tactics upset people, including the driver involved in the altercation last week, and he bears the man no ill will, Mckelvie said.

The 26-year-old hopes the incident hasn’t negatively impacted the driver’s life and would even like to sit down for dinner with him and other SOG members to engage in a discussion and share perspectives.

Haq’s friends waiting outside intend to help with his defence any way they can, said SOG colleague Janice Oakly, the friend who wrote the phone number on Haq’s arm.

“The number is so if … he’s in there for some time and allowed a call, he knows I’ll be waiting in the wings.”

Remind me: did the previous

Remind me: did the previous article describing his "fears" include mention of his arrests and two-week jail term for criminal contempt of court? I don't recall such, which impugns the integrity of the first article

"Sacrificing oneself" isn't anything I'd recommend, especially when it amounts to giving up everything for nothing.
The most useful soldiers are the ones who are alive and able to report for duty.
I'm not impressed with an organization that exhibits so little regard for its members that it would go ahead with an activity that would predictably disable the entire organization, and less so for one that didn't seriously consider the range of negative impacts possible for individuals, the group, and the cause.
And I hope the fellow who interfered with the ladder gets charged with assault.

interesting giving up everything for nothing... i do not call actions that protect our environment nothing are their risks you bet are their reasons even more so... it is called standing up for this planet... i wish zain huq all the best after all he cares about the future of this planet thus their are risks did he know them most likely... did he consider them most likely... maybe he & others have this strange idea it would be nice to have a future that included a planet with it .

"Sacrificing oneself" seems to be the only thing that has ever worked because it gets attention. Suffragettes, civil rights Freedom Riders.... It really does seem that the general public wants to sleepwalk its way into hell, which is the antechamber to extinction.

p.s. Zain is one of the finest young people I've ever met. It would do Canada a disservice to lose him.