By Marc Fawcett-Atkinson | Investigations, Food Insider | July 4th 2022
#7 of 10 articles from the Special Report: The Influencers 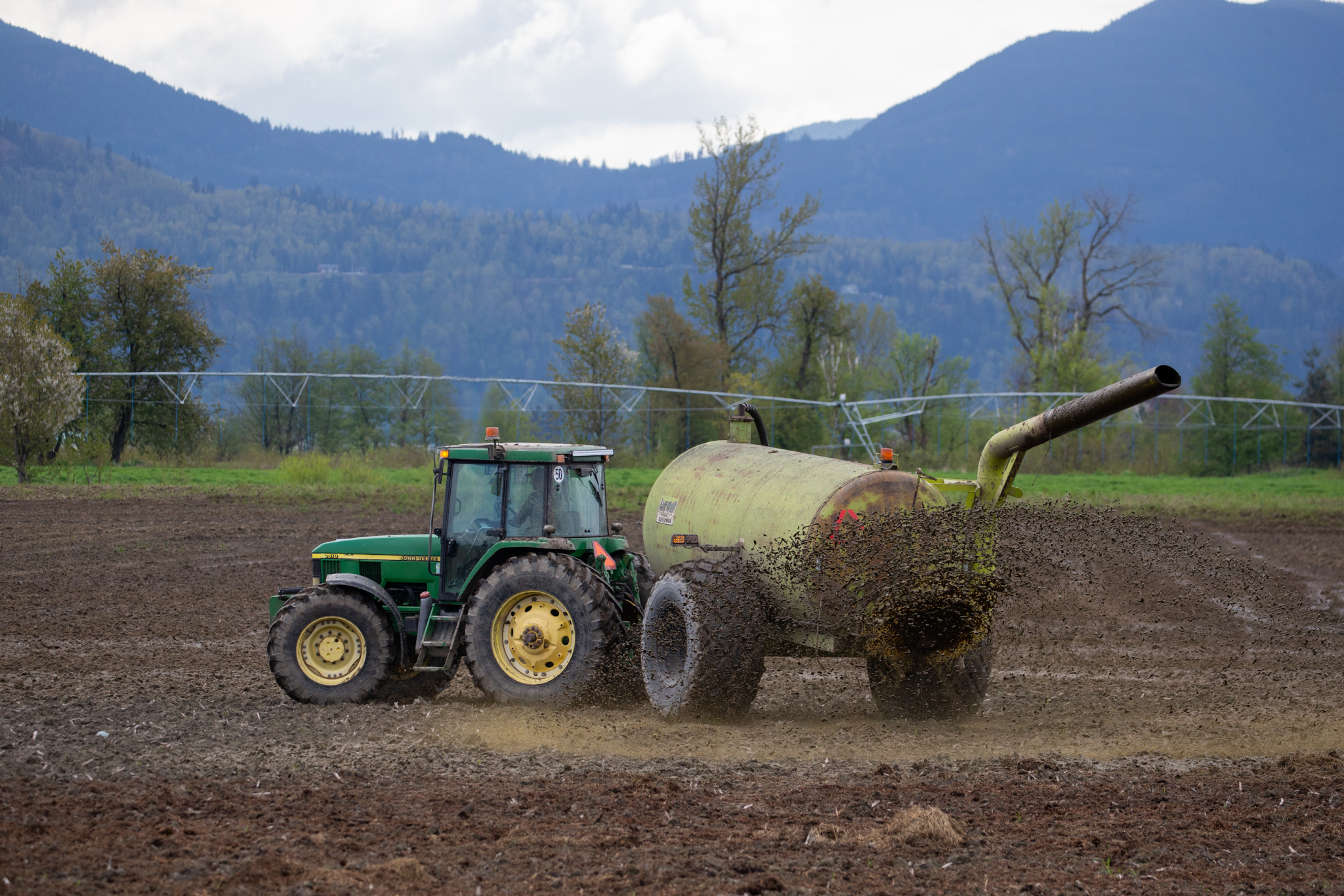 On a Thursday afternoon last May, Canada's Minister of Agriculture and Agri-Food Marie-Claude Bibeau logged into a virtual meeting with Karen Proud, CEO of Fertilizer Canada, an organization representing Canada's $23-billion fertilizer industry. The meeting, also attended by assistant deputy minister Tom Rosser and special adviser on agriculture and climate change Javier Gracia-Garza, was poised to be delicate.

A few months earlier, in December 2020, the government had challenged Bibeau's ministry to reduce emissions from artificial nitrogen fertilizers by 30 per cent by 2030. Nitrogen fertilizers are made from natural gas and are responsible for about a quarter of all Canadian agricultural emissions. At a time when gas companies are under pressure to reduce production, fertilizers are an area of growth that falls largely out of the public eye.

Canada was already lagging in the global race to tackle the problem following the European Union's 2020 announcement of an ambitious plan to cut total nitrogen fertilizer use by a fifth before the decade’s end. As other countries laid out reduction plans, Canada’s fertilizer emissions were rising sharply, growing 64 per cent between 2005 and 2019. Bibeau's office was racing for solutions.

Fertilizer Canada was determined to prevent Canada from adopting the European approach, which will help farmers reduce their overall fertilizer use and would cut into fertilizer producers' bottom line. Instead, it wanted the government to focus on reducing emissions per bushel of crop using the so-called "4R" method. An industry-led approach, the 4R method helps farmers use fertilizer more efficiently but doesn't necessarily reduce the total amount that ends up on Canada’s fields if farmers expand their acreage or grow more fertilizer-hungry crops to boost yields.

Cue the start of a massive lobbying campaign by Canada's fertilizer industry that has seen Proud and other lobbyists for the organization meet with civil servants and elected officials over 80 times since May 2021 about the plan and other issues, and send dozens of emails packed with everything from veiled threats to dog photos and smiley emojis.

A snapshot into those lobbying efforts was partially revealed in a trove of documents obtained by Canada's National Observer through a freedom-of-information request. They give a rare window into the friendly — and occasionally tense — relationship between lobbyists and government.

One set of emails sent between mid-September and early October tracks a conversation between Fertilizer Canada senior director of government relations Daniel Kelter and Lauren Donihee, a senior policy official with the federal Ministry of Agriculture, and other ministry staff. The correspondence deals with the Sept. 27, 2021 release by Fertilizer Canada of a controversial industry-commissioned report that paints the federal emissions reduction targets as a doomsday scenario of low yields and $48 billion in lost revenue for farmers.

On Sept. 23, 2021, Kelter reached out to Donihee to ask if the government wanted a pre-release copy of the report. He emailed her the draft report the next day — a Friday — accompanied by a few dog photos to "lessen the impact of any extra work this causes you," he wrote.

Donihee responded on Sept. 25 by saying government officials were "surprised" to see the report was modelled off the EU's plans to curb total fertilizer use. It was a direction she said the agriculture ministry had "been clear" it did not plan to take. The bad press and public backlash the government would receive from farmers when Fertilizer Canada released the report could "take the conversation" between the lobbyists and the government "in a less constructive direction," she warned.

On a Thursday afternoon last May, Canada's Minister of Agriculture and Agri-Food Marie-Claude Bibeau logged into a virtual meeting with Karen Proud, CEO of Fertilizer Canada, an organization representing Canada's $23-billion fertilizer industry.

Kelter responded the same day and said his group would "appreciate" meeting with government officials to hash out the report but still planned to release it to "ensure that the approach taken in Europe is not duplicated in Canada." These worries stemmed from his knowledge of meetings between Canadian and European officials on reducing fertilizer emissions and earlier comments from government officials focused on reducing the need for synthetic fertilizers entirely, as opposed to helping farmers adopt 4R.

Fertilizer Canada released the first part of the report on Sept. 27, and it garnered some media attention. Federal officials were not pleased.

On Oct. 7, Donihee wrote to four fellow civil servants working on the emissions reduction plan and updated them on a call she had that morning with lobbyists Kelter, Proud and two others from Fertilizer Canada. She told the group the government wanted to "work together" with them but didn't "want our discussions to play out in media channels." She had also told Proud and her colleagues their "assumption" in the report that Canada would adopt an EU-style approach and curb fertilizer use was "not particularly helpful to moving the dialogue forward."

The lobby group responded by saying it was "under tremendous pressure" from Canadian and international partners to get a more defined picture of the government's plan to reach its emissions reduction targets. Kelter and his colleagues had been "quite frank" that they released the report a week after the 2021 federal election to warn the incoming agriculture minister of the "implications" — strong resistance from the farm and fertilizer industry lobbies — that would accompany a European-style approach to meeting the targets.

Soon after the Oct. 7 meeting where Donihee and other officials reconfirmed they were not planning to adopt the EU approach, Fertilizer Canada told government officials they would hold off releasing followup reports designed to put the government under the spotlight once more.

Fertilizer Canada's lobbying tactics seem to have worked, at least in part. The organization has been "sort of effective in the media and amongst farmers," said Darrin Qualman, the director of climate policy for the National Farmers' Union, which has done its own share of lobbying in favour of a stronger approach.

Qualman said Fertilizer Canada capitalized on the federal government's roughly 16 months of silence between announcing the target in December 2020 and releasing a more detailed plan in March 2022. With no publicly available plan and few details on even basic issues like how to measure nitrous oxide emissions from farms, federal officials made it easy for Fertilizer Canada to whip up public opposition to any future rules.

The lobbyists' report that raised farmers’ fears painted a grim picture where there never was one, Qualman said. It was based on the premise Canada would follow the EU’s lead and require a blanket reduction in fertilizer use. Except the government had never said such a thing, and even if it had, Qualman said the report's analysis was "incredibly simplistic" and failed to properly analyze the savings farmers could gain by spending less on fertilizers while transitioning to more sustainable practices.

He believes the 30 per cent emissions reduction target is easily achievable if the government helps farmers use fertilizers more efficiently and supports farmers so they can adopt regenerative and organic farming techniques that don't use them at all. If the changes are well-designed, farmers could actually see their profit margins grow as they spend less money on fertilizers. Emissions from both the manufacturing and use of fertilizers would also go down, as would Canadian farmers' dependence on fossil fuels. The federal government echoed his analysis in a March 2022 discussion document on the issue.

In the months since Kelter and Donihee sparred over the release of Fertilizer Canada's September report, the government appears to have more firmly closed the door on mimicking Europe and adopting measures to limit total fertilizer use. In a March 2022 discussion paper, the government said its plan will not include "a mandatory reduction in the use of fertilizers," and emphasized it will support existing solutions like promoting the voluntary implementation of Fertilizer Canada's 4R program on farms.

"I think we've come to a common understanding," said Proud. The government is accepting comments on its March 2022 discussion document until the end of August.

Editor's note: This story was amended on July 27, 2022, to clarify that nitrogen fertilizers are responsible for about a quarter of Canada's agricultural emissions.

Thank you for this view into

Thank you for this view into industry lobbying and its effect on the federal government's attempts to reduce GHG emissions. Shame on these industry representatives who put self-interest above our collective survival.

It's kinda' their job.

It's kinda' their job.

The real shame is on the government representatives who caved in front of a ghost story.