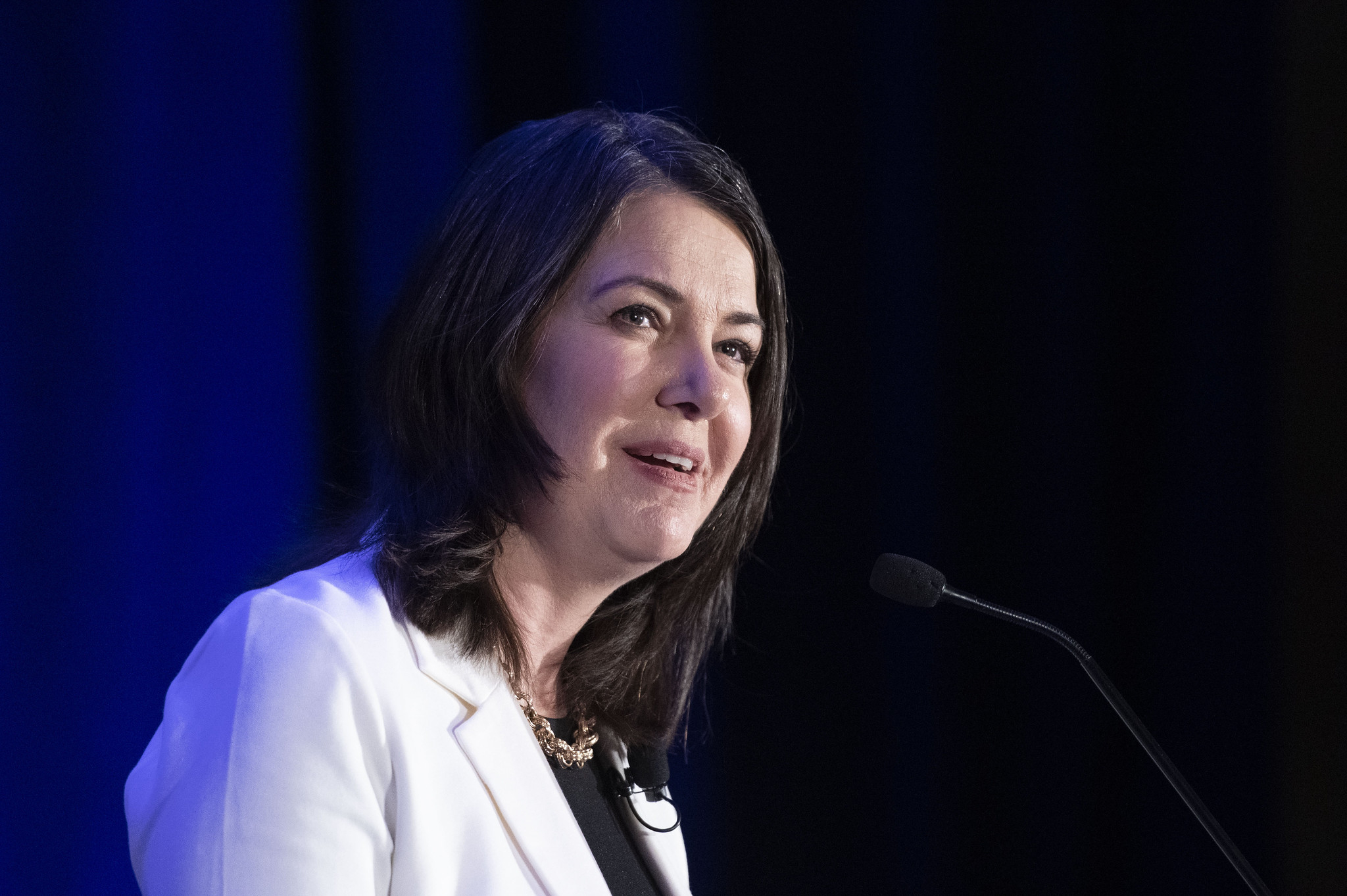 When it comes to Danielle Smith’s view of how to fix the health-care system, it would be every Albertan for themselves. Photo by Chris Schwarz/Government of Alberta/Flickr (CC BY-NC-ND 2.0)
Previous story

As new Alberta Premier Danielle Smith tries to sell her libertarian vision for the province’s future ahead of next May’s scheduled election, she keeps running into the same obstacle: Danielle Smith.

After winning the leadership of her party in October, Smith spent her first few weeks as premier apologizing for things she had said, whether it was about unvaccinated people or the war in Ukraine. Now, she’s being asked to account for her claims of Indigenous heritage — ones that, as APTN’s Danielle Paradis reported, don’t hold up to scrutiny.

A politician having to eat their own words is hardly a new phenomenon, and Smith’s background as a radio host and pundit makes her particularly vulnerable to being fed by them. But few, if any, have ever served themselves such a rich and varied buffet — and her attitude towards health care will almost certainly be the main course.

A recent CBC poll by Janet Brown shows health care is the top priority for Albertans right now, with 41 per cent of respondents rating it as the “SINGLE most important issue facing Alberta.” And if Smith’s own words are to be believed, she thinks the best way to address that issue is by having Albertans pay for more of their care.

In the mandate letter for Minister of Health Jason Copping, she instructs him to work on the creation of “health spending accounts,” which would apparently be seeded with $300 each year and used to fund expenses that aren’t covered by the government. This idea, which she talked up during her leadership campaign, is drawn straight out of a paper she published with the University of Calgary’s School of Public Policy in June 2021. In it, she seems to see those accounts as a Trojan Horse for more private activity in the publicly funded system, and even an opportunity to introduce decidedly American concepts like co-pays.

“Once people get used to the concept of paying out of pocket for more things themselves,” she wrote, “then we can change the conversation on health care.” That change, she suggests, could cut right to the heart of our health-care system here in Canada and the values that underpin it. “I think [it] is time to redefine universality… We should begin to talk about creating a publicly administered health insurance system based on principles of proper insurance. In a proper insurance program, there is usually a deductible or co-payment on services until it reaches a certain maximum when catastrophic coverage kicks in.”

It might be tempting for one of her staffers to suggest this paper was written in a different time, back when she was a pundit and professional pontificator rather than a politician. Unfortunately for them, there’s a video from this past July — when she was running for leader of the United Conservative Party — where she lays out the idea of having people “fundraise” for their own health-care treatments.

“That’s what the beauty of the health spending account is all about,” she said. “Not only would we seed it with a bit of money, but then we would give you the incentive to put more money in for your own medical needs … [and] get your employer money in, raise money to put money in, get your family to donate money. I recognize that we’re going to need more dollars as we go forward. But I don’t think that you want to put more tax dollars in a general pot of money to give to the head of AHS.”

In other words, it would be every Albertan for themselves. And when it comes to Smith’s view of how to fix the health-care system, that’s really what it all boils down to: me before we.

This is a bitter pill for people like Adam Rozenhart, a digital media strategist in Edmonton who tweeted about the premier’s vision for health care. “My dad did two rounds of chemo, one round of radiation, and hospice care for a full month, to say nothing of the half-dozen ER visits in the last year he was alive,” he wrote. “A health spending account wouldn’t begin to cover it.”

When it comes to Danielle Smith’s view of how to fix the health-care system, it would be every Albertan for themselves, @maxfawcett writes for @NatObserver #Alberta #AHS #HealthCare #opinion

Stories like that will help define the next election in Alberta and whether Smith wins it or not.

When it comes to their health-care system and its future, do voters trust the current incarnation of Smith or the one from this past July? Do they believe the version that talked and wrote rapturously about privatization and personal responsibility and the need to radically reform the system, or the one who has toned that stuff down in order to appeal to more moderate voters?

One thing is certain: if she ends up losing, she’ll have nobody to blame but herself.

I hope Albertans are paying

I hope Albertans are paying attention to Danielle Smith's actions and plans for the future. Publicly funded health care, despite all its problems, is a great equalizer in Canada and we need to fight hard to protect it.

I grew up in the US and have been witness to family members dealing with the privatized health care system there. The system works well if you have lots of money. But most people either have to have health insurance with their employment (and the insurance only pays a percentage of the costs) or, if you're poor, you go to substandard facilities.

I'll never forget when, after a teenager was involved in a serious car accident, the parents had to declare bankruptcy (I guess they didn't have health insurance) because they couldn't pay the hospital bills. Then the community galvanized and organized a fundraiser to cover the costs. I don't know if they raised enough money or not. This is shameful in a developed nation like the US.

We get what we pay for. I won

We get what we pay for. I won't vote for parties whose core campaign promise is reducing taxes. Taxes are the best group insurance plan there is. I've travelled, and the only place I experienced culture shock was travelling through the USA. Most wealthy nation on the planet, and the abject poverty is grotesque. I'll pay more taxes to avoid seeing that level of depravity any day.

This seems to be the politics

This seems to be the politics of today - punish those who are poor, sick or a minority. Set the game up so they cannot win. Ever.

."Sigh" why is it that conservatives and capitalists resort to the myths of sturdy individualism, and community/family action to solve the maladies that afflict humanity? If that is not enough, the so-called war mongering leaders of our species, the predatory pirates, adventurers, the poisonous pontiffs and plutocrats, who have left legions of peasants in their wake, maimed, dead, reduced to beggary, are still among us; ripping and tearing at the human condition, maximizing their wealth and power at the expense of everyone/everything else.

And, as always, they are served by the sycophantic barnacles, the grand viziers, the ministers who serve at the "pleasure of the crown", the "politicians" who have suckled their way to the top, laying down their reputations in the footprints of their masters.

If one has ANY glancing knowledge of human history one cannot help observing the same patterns of exploitation, class warfare, betrayal, and failure - repeated, in endless loops and spirals. Different terms, different definitions, but underneath the language of obfuscation - the identical social and economic forces are at work, sifting through the wheat and chaff, discarding the useless, sorting the remainder into varying grades of utility, consuming, what is exploitable, throwing the residue into the trash.

Any fleeting periods of equity, justice, fairness are always under attack by the scammers, grifters, would-be despots, the accumulators hoarding wealth and power, to themselves and to a much lesser extent their followers. World domination, masters of the universe; their delusions know no bounds, but they will all wind up just like their victims, on the trash heap of history.

Is this seemingly eternal spiral about to collapse? Is the "Go Fund me" empire about to drive the world economy? Is this planet and all its species doomed? Well, Individuals like Ms Smith with their cockamamie, half baked "solutions" for human well being, and the out-in-the-open criminal fraudsters passing for national leaders dominating our head space; the prospects don't look promising.

Agreed. Kudos. Of course, those described will call you an elitist or some other off-the-mark, superstitious, mumbo jumbo.

One of the many things that

One of the many things that astounds me about conservatives as they openly, shamelessly, obvliviously, and resolutely follow the Republican playbook, including the hallmarks of privatizing everything, especially education and health care, is how they assume that we don't actually have the always larger-than-life American example right next to us! Tone-deaf beyond belief, cons miss the defining Canadian trait, that we take pride in our public health care system, and generally NOT being American.
I usually rail at women being primarily used as interim leaders of sinking ships unless that ship happens to be the UCP.....

I hope the next article in

I hope the next article in the Observer about this ridiculous idea is an exploration of the Canada Health Act, and what implications her plan would have in the context of the federation. Unless she's wiling to pull Alberta out of confederation, I don't think she can do this, but am wiling to be corrected. Please write this piece, thank you.

I couldn't help but laugh

I couldn't help but laugh once I saw the title. The NDP has already had several polls since early 2021 hinting they could get a majority, though the numbers did go back and forth a little bit. This would just give the NDP an extra boost for an even bigger majority if the "bad medicine" does impact Danielle.