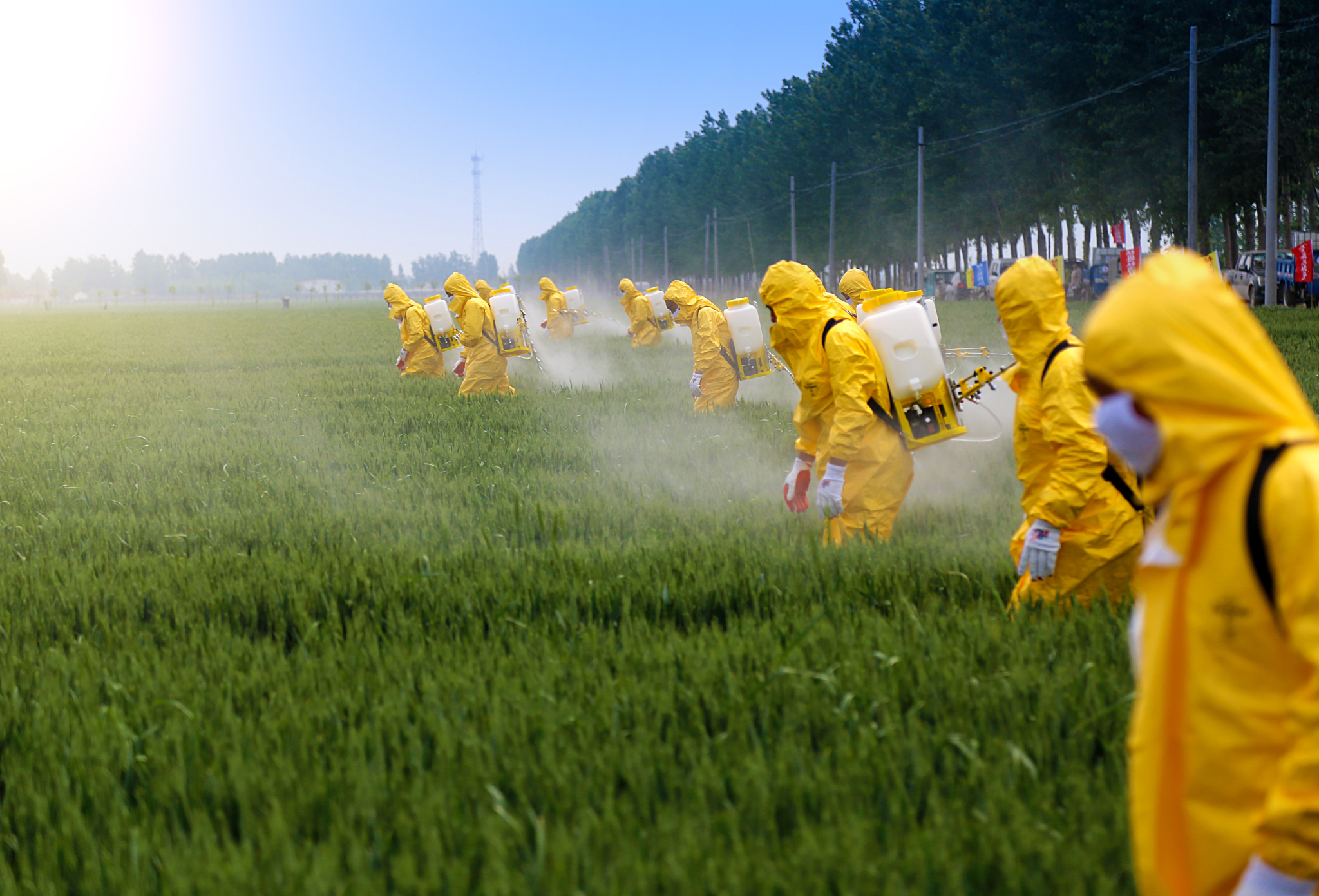 Canada's pesticide regulator repeatedly ignored red flags raised by its own scientists about the health risks posed by the pesticide chlorpyrifos, stalling a review of the pesticide for close to 20 years, documents obtained by the environmental group Ecojustice reveal. All the while, health concerns raised here at home and worldwide about the pesticide were never publicly shared.

Commonly used on crops like wheat, in greenhouses and to kill mosquitoes, chlorpyrifos harms the nervous system and can cause brain defects in children. People are typically exposed by consuming contaminated food residue or water. Canadian farmers used on average 360,000 kilograms of the pesticide each year between 2008 and 2016, and a 2017 federal Canadian health survey found traces of chlorpyrifos on 99 per cent of foods sampled.

After years of pressure from environmental and health advocates, last year Canada announced it would phase out the pesticide following similar bans in Europe and the U.S. Unlike these international bans, which took effect within months, Canadian officials opted for a three-year phaseout that won’t take full effect until the end of this year.

Environmental and health groups were furious about the slow response. Two organizations — Safe Food Matters and Prevent Cancer Now, with the support of Ecojustice — sued the federal government to try to force an immediate end to chlorpyrifos use. The case, filed in 2021, is ongoing.

To build its legal case, Ecojustice obtained more than 10,000 pages of documents from the government. These records reveal that key health assessments of the chemical were stalled for over eight years in a bureaucratic morass while warnings from government scientists about the health risk of chlorpyrifos were ignored between 1999 and 2021.

The three-year phaseout period for chlorpyrifos gives farmers time to use their supplies of the pesticide, alleviating the requirement for pesticide companies to buy back unusable products. Instead of forcing pesticide manufacturers to safely get rid of this "highly dangerous" pesticide, it allows chlorpyrifos to be disposed of “on people's bodies, instead of a hazardous waste landfill where they belong,” said Ecojustice lawyer Laura Bowman.

At least five times between 2008 and 2021, government scientists or Canada's international partners raised red flags about the chemicals and officials did nothing, said Safe Food Matters president Mary Lou McDonald.

Many of the staff who worked on the file remain in key positions at the agency, which perpetuates Canada's relatively permissive approach to regulating pesticides, Bowman said.

"These are the people that are supposed to be protecting us," she said. "(But) it seems like they're more interested in protecting pesticide companies from the consequences of the harm that their products pose."

The two most flagrant warnings that went unheeded occurred between 2016 and 2021, before the ban.

Canada's pesticide regulator repeatedly ignored red flags raised by its own scientists about the health risks posed by the pesticide chlorpyrifos, stalling a review of the pesticide for close to 20 years.

The first arose in 2016. That year, researchers alerted government officials to two different computer models that showed chlorpyrifos could potentially contaminate enough drinking water to threaten human health when sprayed on crops, used in buildings or sprayed to kill mosquitoes. Whether this was actually happening was hard to determine, with researchers stating the "available water monitoring (data) was deficient … and is not suitable for use in refinement of the risk assessment."

Faced with this deficient data, Health Canada relied on computer modelling to estimate the risk that chlorpyrifos could contaminate drinking water. Modelling done between 2016 and 2019 showed the pesticide's continued use could exceed the threshold for safe drinking water for more vulnerable people — a problem Bowman said the agency denies.

An email chain dated November and December 2018 shows agency scientists and managers simply "expected" that new regulations limiting chlorpyrifos use to greenhouses, mosquito control, buildings and elm trees, combined with existing rules for chlorpyrifos use in greenhouses, would eliminate “significant” risk of drinking water contamination. At the same time, Canadian health monitoring for the chemical found it was ubiquitous in Canadians' urine.

The results of this drinking water modelling were not made public, though researchers pushed to include their results in a public 2020 environmental re-evaluation document. Their suggestions were eventually edited out by higher-ups in the agency.

Bowman believes the public had the right to know about the chlorpyrifos modelling results and points out previous findings on other pesticide risks by the government were released.

Health Canada told Canada's National Observer in January that additional testing of food items in Canada and the U.S. found chlorpyrifos in 2.7 per cent of 34,144 Canadian samples tested between 2013 and 2017. The levels found were all "within the established legal limits." It added urine testing results cannot "fully assess" how much Canadians are exposed to chlorpyrifos and the risks associated with that exposure.

In contrast, European pesticide regulators banned chlorpyrifos because they determined there was a potential health risk from any exposure to chlorpyrifos, which can be traced through urine.

The second problem came in 2021 when Canada banned chlorpyrifos but allowed an extended three-year phaseout without researching the health risks.

Two years earlier, Europe's pesticide regulator banned chlorpyrifos because the agency found any level of exposure posed a risk to the genetic information of human cells.

Canadian law required officials to review Canada's approval of the use of chlorpyrifos in the wake of the European ban to determine if a special health risk review was needed to assess its risks to human health and the environment. The agency decided it wasn’t necessary because chlorpyrifos was already being reviewed as part of a re-evaluation process started in 1999, and that re-evaluation was supposed to include a health risk assessment. But that health assessment was still in its early stages and hadn't yet considered the risk to human health — the main reason for the EU chlorpyrifos ban.

That human health risk assessment of chlorpyrifos was never completed. In early 2021, Canada announced a three-year phaseout, prematurely terminating the government's risk evaluation. The chemical will no longer be legal after December 2023. A public document announcing the ban didn't provide a reason for the longer transition.

An email chain from April 2021 shows that Canadian officials were aware they needed to justify their decision to opt for a three-year phaseout rather than an outright ban. Health Canada policy notes this long transition is only allowed if the pesticide presents no "serious and imminent risk" to human health or the environment.

On April 24, Margherita Conti, a director general within the Pest Management Regulatory Agency, noted in a draft of a public note announcing the chlorpyrifos ban that "based on existing information, there are no serious or imminent health risks … and a shortened phaseout is not considered necessary."

Two days later, Mei Qi, a senior scientist working on the chlorpyrifos file, asked for the line to be deleted, saying the government couldn’t back up that statement because it hadn’t "done additional work related to … human health."

That additional work never happened. A briefing note drafted on April 29, 2021 for the science committee working on the chlorpyrifos file says the ban and a lack of data meant it would "not proceed" with its planned health risk assessment. A few weeks later, the government made the decision public in a brief note announcing the ban.

Environmental and health groups reacted quickly to the announcement, decrying the long phaseout period, which they claimed lacked a solid scientific justification, and sued for a judicial review. The suit by Safe Food Matters and Prevent Cancer Now filed with the help of Ecojustice uncovered the internal documents cited in this article.

Health Canada conceded it had failed to adequately justify its decision. A few months later, in December 2021, the agency published an updated decision that provided its reasoning for banning the chemical with a three-year phaseout period, acknowledging it did not adequately justify that decision in its May announcement. But it did not speed up the planned chlorpyrifos phaseout and continued to justify its position.

The new document states chlorpyrifos poses a "low health concern" in drinking water and is "not often detected and unlikely to be found in Canadian drinking water sources," a message echoed by Health Canada in its January statement to Canada's National Observer.

While chlorpyrifos is clearly on the way out in Canada, Bowman said the documents outlining the government's efforts — or lack thereof — to study and regulate it over more than 20 years should raise questions about Canada's pesticide rules.

Unlike Europe, where regulators will block pesticides if they think there could be a risk, Canada will implement risk mitigation measures like usage rules or bans only if it believes there is a clear issue with the chemical.

Every single "regulator" is

Every single "regulator" is merely a lap-dog for the industries they are supposed to be watch-dogs over. 40 years of deregulation has resulted in a complete corporate take-over of what little democracy we had.

Memo to NDP or Green Party:

Memo to NDP or Green Party:

(Realizing it has likely ever been thus)

Its sole purpose would be hearings and action to dig into such malfeasance within the gov't bureaucracy, establish clear lines of responsibility through investigation (backed by necessary powers) and then do the necessary weeding. Overwhelmingly punitive penalties if "favours" received.

Complementary legislation would prevent civil servants from migrating to any private sector domain in which they previously held legislative influence.

Public service ought to be a calling, not a stepping stone.

PHAC and federal governments have been denying and ignoring the epidemic of Lyme and tick-borne diseases in Canada and PMRA’s, Dr. Richard Aucoin is playing a key role by not allowing the sale of 0.5% permethrin spray. No repellent works well against ticks and prevention involves wearing long-sleeved, long-legged clothing tucked into socks all of which should be factory treated with permethrin, a synthetic version of chrysanthemum. Ticks have to crawl up and just spraying your socks and foot wear with 0.5% spray will reduce tick bites by 73.6%. The spray will stick to the clothing for 42 days or up to 6 hand washes. Permethrin is not absorbed by our skin but is neutralized by skin oils within 20 minutes. Repellents such as icaridin or Picaridin [Piactive] are required on exposed skin. Frequent thorough tick checks are always in order. It only takes a few molecules so you might try 0.25% ant sprays as long as they contain permethrin. Don’t get the wet spray on the cat or spray clothing when pollinators are present.

It seems there is no higher court of appeal and Dr. Aucoin doesn’t have defend his unjustified banning of proven preventive products. In this war, it’s the ticks that are winning.