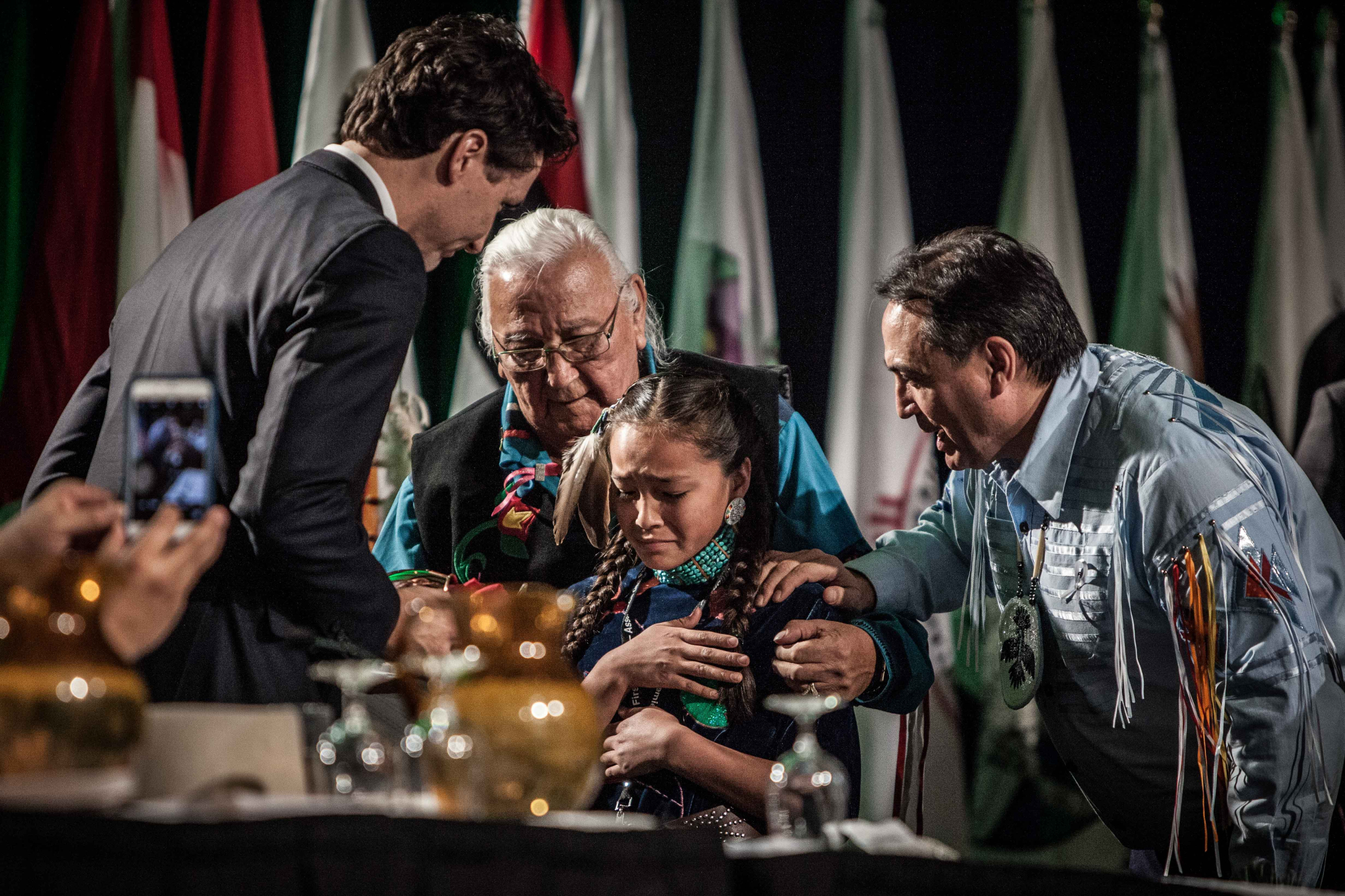 Twelve-year-old Autumn Peltier broke down in tears as she presented a gift to Prime Minister Justin Trudeau of a copper bowl containing a red cloth, some tobacco and a copper cup.

She offered the gifts on stage at the Special Chiefs Assembly hosted by the Assembly of First Nations on traditional Algonquin territory in Gatineau, Que. on Tuesday. Moments later in a televised interview, Peltier said she made it clear to the prime minister that he had let her down.

"I said, 'I’m very unhappy with the choices you’ve made.' And he said, 'I understand that.' And then I started crying, and all I got to say after that was, 'The pipelines,'" Peltier told Jorge Barrera, a reporter from the Aboriginal Peoples Television Network. "And he said 'I will protect the water,' and then I went to go sit back down."

The exchange came the week after Trudeau made a series of controversial decisions to reject one west coast pipeline — Enbridge's Northern Gateway project — but to approve two others — Kinder Morgan's Trans Mountain expansion from Alberta to the west coast of B.C., and Enbridge's Line 3 replacement from Alberta to Wisconsin in the U.S. midwest.

Trudeau and many business leaders have said the projects can be built safely while creating jobs and increasing government revenues that will assist in Canada's transition to a cleaner economy. On the other hand, many Indigenous leaders, environmentalists and some mayors across the country oppose pipeline expansion on grounds of heightened oil spill risk and an increase in carbon emissions that could push Canada's climate change goals out of reach.

Peltier also prepared a short speech that she hoped to deliver to the gathering, and conference organizers invited her to deliver that message on Wednesday afternoon. This decision followed a plea from renowned Métis artist Christi Belcourt, who expressed frustration that people weren't paying attention to Peltier.

In notes from her speech posted online by APTN, Peltier made a plea for the government to take strong action to address climate change, to protect water and to draw inspiration from the dramatic battle by members of the Standing Rock Sioux tribe in North Dakota against construction of the Dakota access pipeline through land they hold sacred.

Environmentalists say that the Standing Rock struggle has inspired new coalitions and solidarity in other regions against similar proposals for natural resources projects.

"I don’t agree with the underground pipelines," said Peltier's notes. "They are still polluting our water. It’s time for humanity to stop terrorizing Mother Earth and give her time to heal. We came together for Standing Rock and we can certainly come together for water. I hope we can stand together in unity. I would like to take this opportunity to offer up a water song.”

After watching the scene unfold, Belcourt had expressed her frustration on her Facebook page. She posted an image of the gift exchange with Trudeau and said it was a huge loss that Peltier couldn't speak to the crowd at that time.

"This photo speaks a 1,000 words to me," Belcourt wrote in the post, "About what children and young people are asking for and the unwillingness to listen. Today Autumn Peltier told the PM she was unhappy with him and his decision on Kinder Morgan. She told him the waters need protecting. She gave him her copper vessel from her own bundle and her families bundle. She had a speech, but it seems they only had time on the schedule for her to present a gift. What a huge loss that we didn't take the time to listen to this young girl speak as what she has to say is powerful."

After the gift exchange on Tuesday, Trudeau told the gathering in a speech that he understood some were unhappy with his decisions on the pipelines, but that he felt the government could still achieve reconciliation with Canada's First Nations, despite having disagreements.

After hearing Trudeau say she would protect the water, Peltier said she still has hope.

It makes me sad that elders had spent a lifetime advocating for Mother Earth years before me.

I wonder if, when I am 70 or 80, will I have spent my life advocating and nothing has been done.

I should not be standing here right now worrying about my future and my children and grandchildren’s future. I have trust and belief in my prayers, leadership and tobacco, especially after many of our tribal nations gathering at Standing Rock, where we had victory.”

I would like you to think for a moment how long can you live without air?

But most importantly everything and everyone needs water.

Mother Earth has been in existence for billions of years and it has taken us less than a century to destroy her.

It breaks my heart when I hear broken promises by our federal government.

We know climate change isn’t going to change tomorrow. But tomorrow is a new day and we can try to sit together and work together to discuss other ways we can save the environment.

Our people and our land have been through enough from what I’ve been learning. This land is not for sale. The pipelines still pose a danger to our water.

After time, pipelines erode, they rot and break down. There have been pipelines breaking all over.

Water is a force of nature. It is powerful and in time it has the ability to rot and break metal down.

I don’t agree with the underground pipelines. They are still polluting our water. It’s time for humanity to stop terrorizing Mother Earth and give her time to heal.

We came together for Standing Rock and we can certainly come together for water. I hope we can stand together in unity. I would like to take this opportunity to offer up a water song.

I bet he had lots of time for

I bet he had lots of time for selfies with the crowd afterwards though.

Who does our Prime Minister

Who does our Prime Minister think he is kidding? Surely not a 12 year old who has done her research, and is in tears as she presents a gift she believes is sacred. His recent promise of 1.5 billion to protect our coastlines, is a paltry sum when you realize it has cost Enbridge 1.2 billion U.S. so far to partially clean up the land spill in Kalamazoo Michigan, and add to that comparison the fact that Canada has the longest coastline on the planet. Is that the good stewardship he is referring to? Had he ponied up 10 billion we might have believed he was doing something other than a photo-op.

God bless this little girl for standing up. She won't be alone in opposing those pipelines, but more of us need to open our mouths and wallets in the struggle to halt climate change. We can't do that while building old technology infrastructure that has a 40 year lifetime.

Alberta tar is not oil...and when it gets to our tidewaters, it doesn't magically turn into oil It is un-upgraded, unrefined bitumen, which then needs to travel to China, to get a price lower than being paid in Texas, before making the return journey as oil. I recently learned that we must also continue to frack to get the light hydrocarbons that junk needs to be diluted with in order to flow, so let's get ready for 40 years of underground carpet bombing to extract the remnants of sweet light crude we have left.

Forty more years of this kind of water protection we cannot afford. Yes. We need oil to transition. WE DO NOT NEED THE GLOBAL REFINING LOOP TO CHINA. Refine it in Alberta, where its dug up. Sure, some Albertans may die of cancer as a result, but these advantaged folks are of less worth to the future then herring roe and salmon.

Someone, perhaps a child, needs to explain our well meaning, good intentioned PM...what dispersed petroleum, mixed with sea water, does to fingerlings. Not only can we not afford it, the food sheds we will need as climate change puts more and more arable land at risk, become dead zones when oil is dispersed in water.

The water we need to protect supports life, as Autumn likely knows. Does Justin think we can be convinced that tailing pond quality water can be remediated so children can drink it, and herring and salmon roe can thrive in its murky depths???