Nick Fillmore: Old media sucked in by whatever politicians and General Motors say 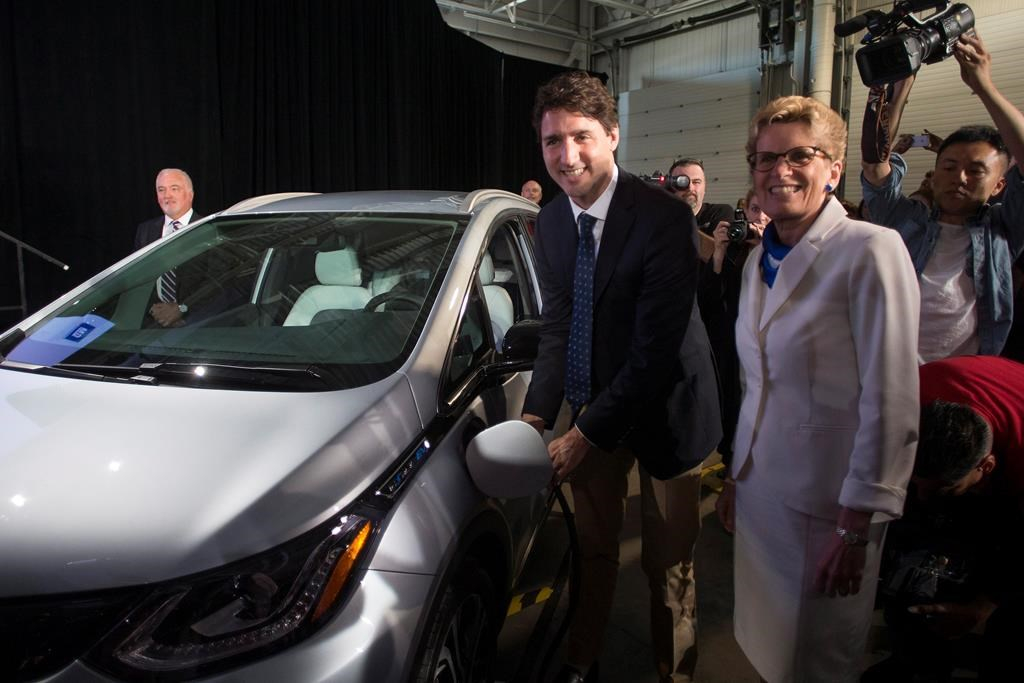 All the big newspapers and TV networks breathlessly reported word for word what they were told at a joint political-General Motors press conference:

The Globe and Mail:

“For decades, the splashy, job-creating announcements in the auto sector in Canada have been about manufacturing jobs."

“General Motors of Canada Ltd. went in a different direction Friday, announcing the hiring of 700 to 750 new engineers who will work on the automobile of the future – vehicles that are battery-powered, connected to the wired world much more closely than they are now and will eventually drive themselves.”

CTV News reported what Prime Minister Trudeau said, just as though the comment came from an official news release: "We know that to create good jobs ... we have to be on the cutting edge," Trudeau said. "This investment by GM in jobs that will support their operations all around the world shows we're succeeding in that regard."

How exciting! How futuristic!

But wait a minute. Here’s a bit of interesting background. GM does not have to hire Canadian engineers for the 700 jobs. In fact, they are going to go to Silicon Valley to recruit them.

If the reporters had bothered to scan through their archives, they would have discovered that the auto industry in Canada is doing very little compared to what it was like a few years ago, when many thousands of people were employed with excellent wages.

Since the Canada-US Autopact was ruled to be illegal several years ago and the North American Free Trade Agreement was implemented, manufacturing jobs – which is what Canada really needs – have disappeared by the tens-of-thousands.

Five Canadian assembly plants have closed since the turn of the century. Only one has opened.

The failure of The Globe, CTV and others to provide background for this story is typical of what is so wrong with Big Media these days. This story wasn’t incomplete because of media cutbacks. It’s just lazy, puffery journalism.

What got me off on this rant were two excellent letters to the editor published in the Toronto Star on Sunday. When we have to go to the letters page to get the interesting facts about the news, it’s no wonder people do not trust the old media outlets.

Has General Motors of Canada forgotten that only seven years ago the governments of Canada, Ontario and the U.S. saved it from oblivion when decades of prodigiously arrogant mismanagement inevitably resulted in their bankruptcy?

Are folks aware that even as the fate of Oshawa Assembly is in the balance, GM is investing billions of dollars in ramping up Mexican production?

Do people know that post-bankruptcy GM has already displayed astonishing hubris by becoming the first of the Detroit three automakers to import cars made in China for Canadian and U.S. consumption in the form of the new Buick Envision?

While I am displeased that companies like Nissan, Mazda, Subaru, Hyundai/Kia and VW account for a massive chunk of Canadian auto sales without making a single car here they nonetheless never came begging for our tax dollars.

From the other side, one can understand the natural temptation of paying manufacturing wages in pesos rather than loonies, which has been the predictable and predicted consequence of the rise of NAFTA and the demise of the Canada-U.S. Auto Pact, but GM really is a special case.

Finally, if GM’s Oshawa plant is to continue pumping out cars and providing middle class jobs you can brace yourself for a big dollop of corporate welfare factoring into the equation.

Without meaningful trade borders and true national sovereignty, transnational bastions of “free enterprise” like GM will really have our political leaders over a barrel as competing jurisdictions outbid one another with massive taxpayer subsidies designed to lure investment or simply retain the remnants of our industrial core.

Before Justin Trudeau and Kathleen Wynne get too excited about the 700 jobs coming to Oshawa and area, let’s review what has happened over the last decade at GM.

First of all, we lent GM just over $12 billion after the 2008 crash and Stephen Harper sold it for a $3.5 billion loss to Canadian taxpayers.

Secondly, we have lost 20,000 manufacturing jobs at GM in Oshawa since 2003. Why were no job guarantees written into the deal when we gave GM billions of dollars?

Third, and most insulting, GM announced at the press conference it would go to Silicon Valley to recruit the workers for the Oshawa GM jobs.

So, in conclusion, we have lost $3.5 billion to GM, lost about 20,000 good high-paying manufacturing jobs at GM in Oshawa and now they have announced they will go to another country to recruit workers for those jobs.

Why exactly are Mr. Trudeau and Ms Wynne celebrating?

This is the shill of the

This is the shill of the corporate-government spin doctors. They are all so busy high fiveing one another and taking selfies that they don't even see their own sense of entitlement. The mainstream media has failed our country..the sooner they are replaced by journalist run media that are willing to tell the truth the better.

It is accurate to suggest

It is accurate to suggest that what passes for news in virtually all of the mainstream media is little more than political or corporate press releases. And, like the corporate and political elite whom they represent, the media are quick to introduce a counterspin when confronted with uncomfortable facts. For example, in this case, an unsourced rumour countered the information about recruiting in Silicon Valley by suggesting that there were a lot of Canadian ex-pats in Silicon Valley and implying that the recruitment would be directed at those individuals.

Unfortunately, in a representative democracy where everyone can’t attend the actual debates and question the politicians, citizens depend on the media for information on which to base their voting decisions. Given the laziness of the press, tight deadlines and being under resourced, elections are basically straw polls of the ignorant. Percentagewise, very few citizens have time to dig for the facts if not presented to them by the mass media. This has caused Canada along with many other so-called democracies to be dysfunctional from a democratic perspective.