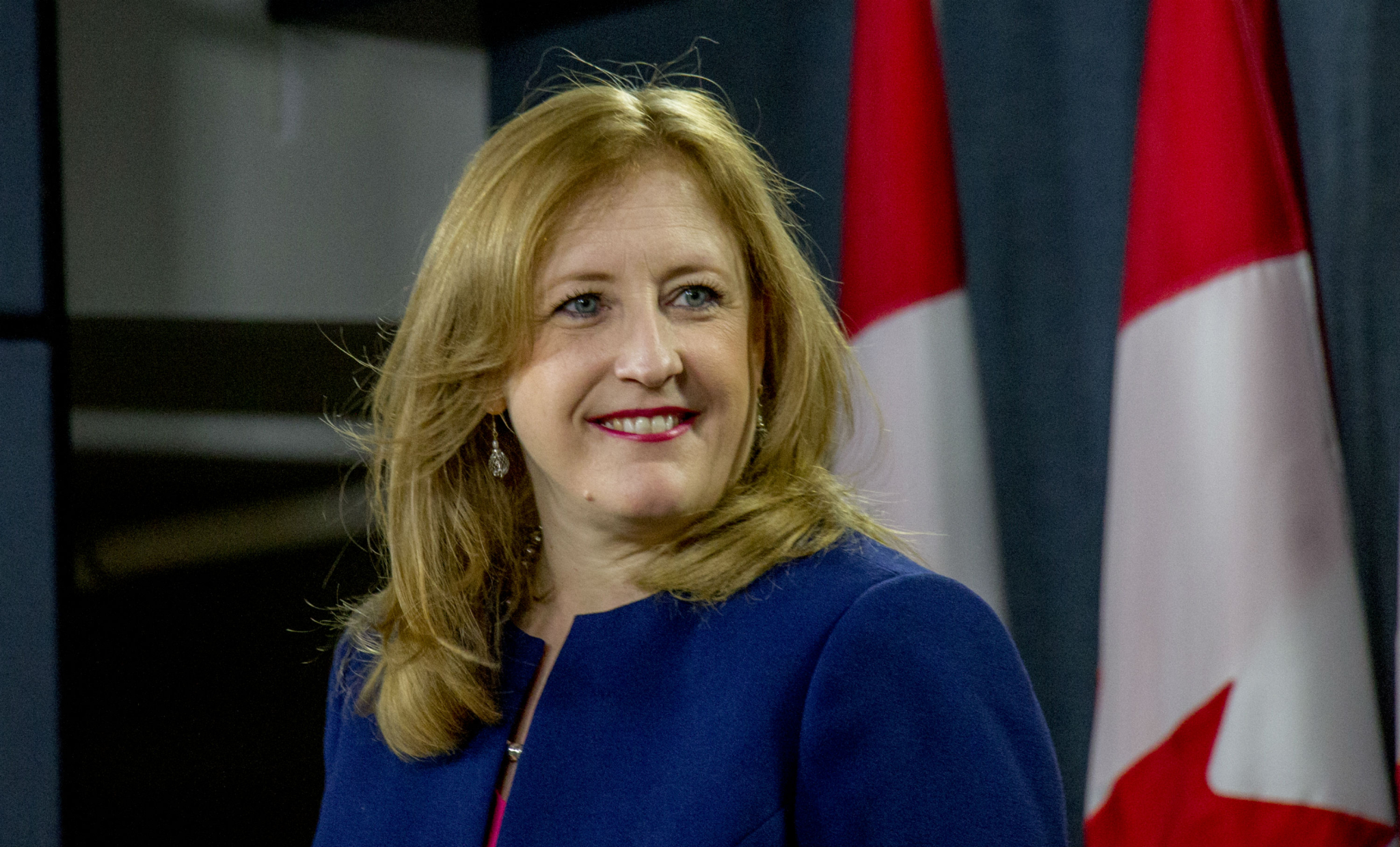 Tory MP Lisa Raitt, who hopes to replace Stephen Harper as leader of the Conservatives, condemned the "irresponsible populism" of competitors Kellie Leitch and Kevin O'Leary at an Ottawa press conference on Wed. Jan. 4, 2017. Photo by Bea Vongdouangchanh
Previous story
Next story

It was a red hot message delivered coolly. A vote for either Kevin O'Leary or Kellie Leitch as head of the Conservatives, said leadership hopeful Lisa Raitt, is a vote for divisive politics that will leave hard-working Canadians stranded.

Raitt, who hopes to replace Stephen Harper as party leader this spring, spoke calmly and deliberately during a Tuesday press conference in Ottawa, where she condemned the "irresponsible populism" of celebrity businessman O'Leary and her fellow leadership candidate, Ontario MP Kellie Leitch.

O'Leary has yet to toss his hat into the ring officially, but Leitch has made waves since late last year for "Trump-style" immigration politics that have drawn significant criticism from her Tory peers.

"Kevin O'Leary and Kellie Leitch are embracing elements of Donald Trump’s campaign while ignoring others," Raitt told reporters, accusing them of embracing election lessons from south of the border. "But unfortunately for them, we're not Americans, and neither of them is the President-elect."

O'Leary a showman with "no filter"

Their brand of negative politics, she added, would drive the Conservative party "right into the ground," and cement a Liberal victory in the 2019 election. And while the Milton, Ont. MP expressed confidence that Canadians would not choose Leitch or O'Leary as leader of the party, she launched a new website, www.stopkevinoleary.com, just in case.

Raitt, a former Harper-era cabinet minister, is considered to be among the more progressive candidates in the Conservative leadership race. She was once a labour union negotiator in Nova Scotia and has a science background that includes a masters degree in environmental biochemical toxicology from the University of Guelph, as well as a law degree.

She recognized that O'Leary had not yet formally launched his leadership bid, and did not provide a clear reason for targeting him over Leitch with the website. But all who are interested learning more about their divisive politics are welcome to subscribe to email updates, she said.

"O'Leary is a TV entertainer with absolutely no filter," Raitt told reporters. "This is a man who thinks that 3.5 billion people in poverty is fantastic news. This is the man who said if he were prime minister for 15 minutes, he would make unions illegal.

"Instead of talking about broken Liberal promises and foolish Liberal failures in 2019, we would be wasting energy on baiting and sensational antics with either O'Leary or Leitch."

Raitt pulled no punches on Leitch either, and accused the controversial Ontario MP of embracing "the other half of Donald Trump" that wins votes by "pinning our problems on immigrants." The Conservatives have worked hard to be an inclusive party, she explained, and if selected as leader, Leitch would obliterate that legacy.

"Leitch called Trump’s message 'exciting,'" said Raitt. "She wants to bring it to Canada, she wants to test immigrants on her undefined Canadian values. She wants to destroy one of the pillars of our party’s success, a decade of work becoming the party of immigrants."

Raitt's statement comes just two days after Leitch's campaign manager, Nick Kouvalis, gloated on Twitter about spreading fake news to "make the left go nuts." On Jan. 2, he tweeted an incorrect list of international aid dollars distributed by the Trudeau government that included more than $350 million to the terrorist group, Hamas, and said his plan to cause a Liberal stir "worked."

While Raitt did not condemn Kouvalis' actions specifically, preferring to focus on her own campaign, she called the fake news phenomenon "ridiculous."

"I guess part of the American-style politics that is now coming into Canada is the plan or the ploy that the campaign manager is attempting to do," she said, responding to a question from National Observer. "I'm sure that this fake news stuff we'll start talking about more and more as well, that's why anyone who's concerned about that can go to my website... and join a candidate who will stand up to this because it is ridiculous."

O'Leary rejected Raitt's criticism on Wednesday, telling the Globe and Mail that her warnings were confused and incorrect. But he also told the Toronto-based newspaper that the attacks on him were bringing some excitement to the race.

Following Raitt's press conference and the flurry of media stories that followed, Leitch also addressed her competitor's comments on Facebook. In a fiery post on Jan. 4, she said she alone would protect Canadian values by subjecting every immigrant, refugee and visitor to Canada to a face-to-face interview with a trained immigration official, and called herself a "clear" choice for party leadership.

"Our immigration system is too important to the success of our nation. We cannot play games with it," said Leitch. "Lisa Raitt drew a line in the sand today and showed that she stands with the Liberals and media elites. She does not think it is important to ensure that the people we welcome into our country share our historic Canadian values of hard work, generosity, freedom, and tolerance."

There are currently 13 candidates in the race for Conservative leadership, with a vote scheduled for May 27.

Editor's Note: The story was updated at 4 p.m. Eastern Time on Wed. Jan. 4 to include a Facebook post from Kellie Leitch.

Did Kevin O'Leary once wipe out an entire industry?

Raitt is simply grandstanding in the same way Trump's Republican opponents smugly assumed their positions in the centre of the establishment guaranteed their machine would scupper Trump. Wrong, the rank and file--the _demos_ prevailed. The Bernie people--rank and file Democrats--tried to do the same thing. They failed, though. The Democratic establishment machine was more powerful; they cheated for Hilary, as the leaked emails show. The obvious conclusion from this is that the Republican party is more democratic. If O'Leary can tap into the same anger and resentment that drove all those voters from the US rust belt to vote for Trump, he can win. Unless, of course, the Conservative machine is able to cheat as well as the US DNC. We'll see, won't we.

Both Leitch and O'Leary are

Both Leitch and O'Leary are using pages from the Trump campaign, which of course is based on most demagogue campaigns to spread fear of 'the others' and to promise salvation from a single source, being them of course. If this tactic hadn't work so many times in history, it would be laughable. But there would be the mistake. We can't treat them like the clowns that they are, but we should treat them as the threat to Canadian values and democracy that they are.

Lisa Raitt suggests a vote for either Kevin O'Leary or Kellie Leitch as head of the Conservatives is a vote for divisive politics that will leave hard-working Canadians stranded. Regardless of who gets elected to head the Conservative Party of Canada, short of an ideological and policy turnabout, Canadians will be left stranded and safe in a country free from a Conservative government. So let the Cons weave and bobble as they may, but let us focus on where the country needs to go rather than where is has been and build a low-carbon, renewable energy future with ample jobs and good social policy and supports for all.