Dr. Peter Kalmus didn't make it to his job at NASA’s Jet Propulsion Lab on Wednesday. The astrophysicist turned Earth scientist locked himself to the doors of a J.P. Morgan bank branch in Los Angeles instead. One of over 1,000 scientists in 27 countries who resorted to civil disobedience this week.

Scientists chained themselves to the White House fence, they blockaded government buildings from Ecuador to Germany. They blocked refineries, glued themselves to bridges and shut down banks.

#ScientistRebellion
Social Media impressions of the Madrid actions. Represantative pictures of our governments' choices in the decision of either securing the people's future or putting repressions onto the warning citizens. pic.twitter.com/JqiNNXY8TY

If you know many scientists, you know how strikingly improbable this is and how desperate they must be. It’s a community perpetually couched in caveats and professionally allergic to sweeping statements. These are the world’s most “well, it’s complicated … many different factors at work … more study needed” kind of people.

“I’m a climate scientist and a desperate father. How can I plead any harder?” wrote Kalmus after a team from the Los Angeles Police Department, clad in riot gear, cut him from the bank’s doors and arrested him.

“For me, one of the most horrific aspects of all this is the juxtaposition of present-day and near-future climate disasters with the ‘business as usual’ occurring all around me. It’s so surreal that I often find myself reviewing the science to make sure it’s really happening, a sort of scientific nightmare arm-pinch. Yes, it’s really happening.”

“If everyone could see what I see coming, society would switch into climate emergency mode and end fossil fuels in just a few years.”

The scientists’ rebellion followed this week’s mega-report by the Intergovernmental Panel on Climate Change (IPCC). All the countries in the world asked its scientists to compile everything they know about climate change, to assess every piece of research across every field and summarize it all. It’s one of the most impressive feats of collective brain power humanity has ever mustered.

They’ve done it six times since the first IPCC Assessment Report in 1990. The collective response by the planet’s governments has been much less impressive. Climate pollution hasn’t just increased — we’ve dumped more carbon into the atmosphere since that first assessment than in all previous human history.

We are “firmly on track towards an unlivable world,” is how the UN secretary-general summarized this week’s IPCC assessment. Even the world’s top diplomat can’t bring himself to be diplomatic anymore: "Some government and business leaders are saying one thing — but doing another.

"Simply put, they are lying,"

But the truly dangerous radicals are the countries that are increasing the production of fossil fuels.

You will probably have heard by now the Canadian government approved Bay du Nord just two days later — Canada’s first foray into deepwater drilling off the coast of Newfoundland. The province's premier says he hopes the green light will convince companies that more offshore projects can get approved.

The IPCC assessment is actually a bundle of three separate reports. The one released this week was the third. Working group three looks at what can be done to limit climate change.

The authors assess what’s working and what’s holding us back. They point repeatedly to industry lobbying and propaganda campaigns. Or, in their words: “Opposition to climate action by carbon-connected industries,” which they describe as “broad-based, highly organized, and matched with extensive lobbying.”

On the flip side, the assessment found that “more confrontational forms of climate activism have become increasingly common.” According to one analysis, a quarter of fossil fuel projects faced with activist resistance ended up being cancelled.

Solar power and batteries are 85 per cent cheaper than one decade ago. Wind is 55 per cent cheaper. Solar installations have increased tenfold and there are 100 times more electric vehicles.

Encouragingly, there are 24 countries that have reduced climate pollution and have kept cutting for 10 years or longer. Some have cut by one-third or more. They include European countries like the United Kingdom, Germany, France and Denmark as well as Asian countries like Japan and Singapore.

How did they do it? In its wonky jargon, the IPCC says they’ve had success through “energy supply decarbonization, energy efficiency gains, and energy demand reduction.”

But if you really want to see what can be done in tangible terms, the IPCC created an incredibly useful visual summary, showing how we can cut climate pollution in the coming years and the costs of doing so. The length of each bar shows potential and the colour shows cost, ranging from blue to ever more expensive darker red.

You’ll see one thing that jumps out right away: switching from fossil fuels to renewables is by far the cheapest and holds the most potential. (You might also note the little dark red stub for industry’s favoured pet — carbon capture.) But keep in mind that no single measure gets us anywhere near the total we need. 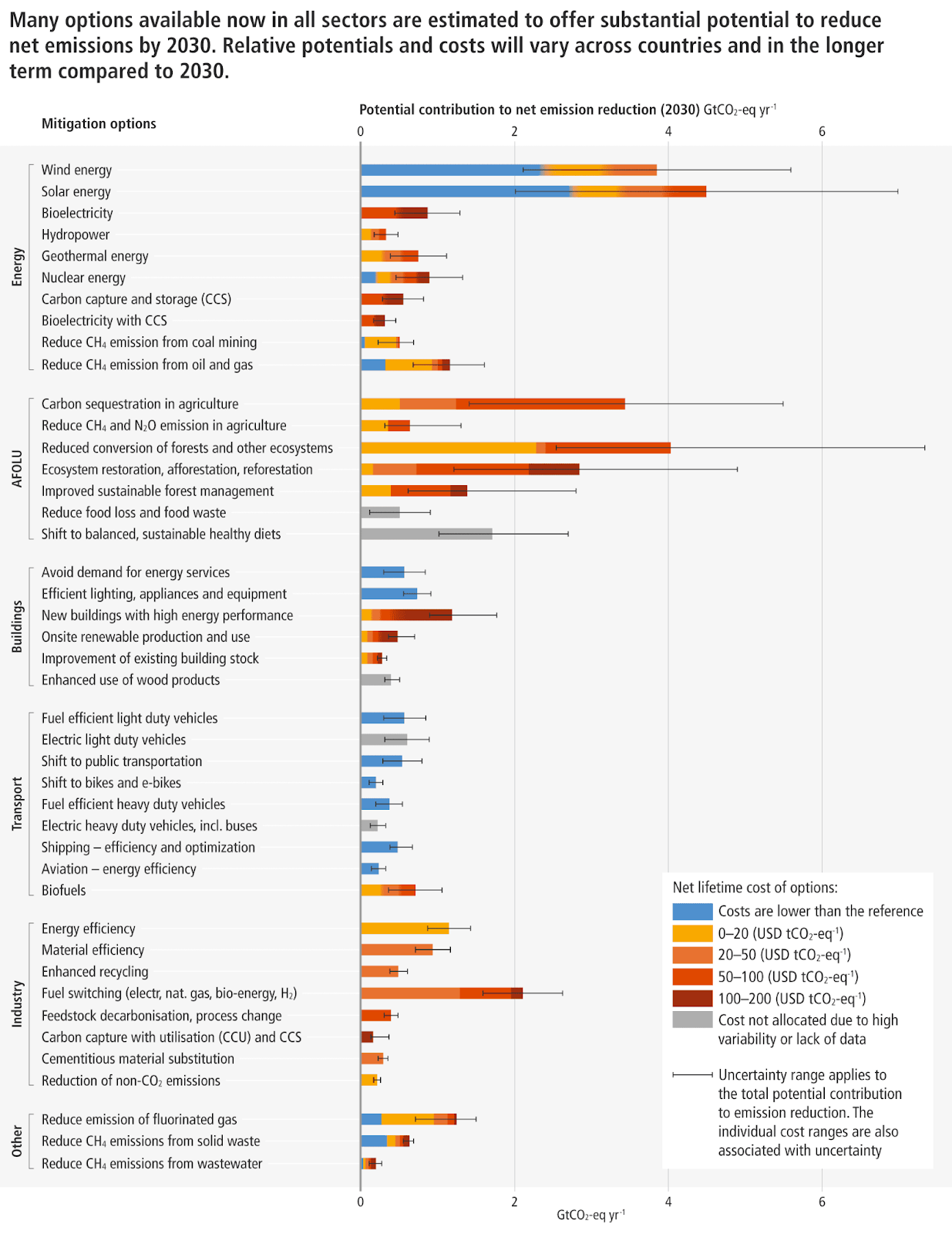 Bay du Nord wasn’t the only big news on the Canadian climate front this week. On that same day, the feds also quashed (temporarily) a major expansion project in the oilsands. Suncor’s base mine extension would produce up to 225,000 barrels per day — roughly the scale of Bay du Nord. But Environment Minister Steven Guilbeault told the company: "Emissions at this level may not align with the pace and scale of emissions reductions required to achieve our targets, and this would hinder Canada's international commitments in respect of climate change." Suncor has nine months to amend its proposal.

Right before the Bay du Nord approval came down, the Newfoundland and Labrador government lifted its ban on wind power. Yes, hard to believe, but the province was actually prohibiting onshore wind energy until this week.

Shell says it’s looking at moving towards Phase 2 and doubling the size of its LNG Canada project on the B.C. coast — Phase 1 is under construction. That’s the LNG terminal that would be fed by the Coastal GasLink pipeline opposed by Wet'suwet'en hereditary chiefs.

Those same chiefs travelled to Toronto this week to address RBC’s annual shareholders’ meeting because the bank is supporting the pipeline project. RBC cancelled its in-person meeting at the last minute. 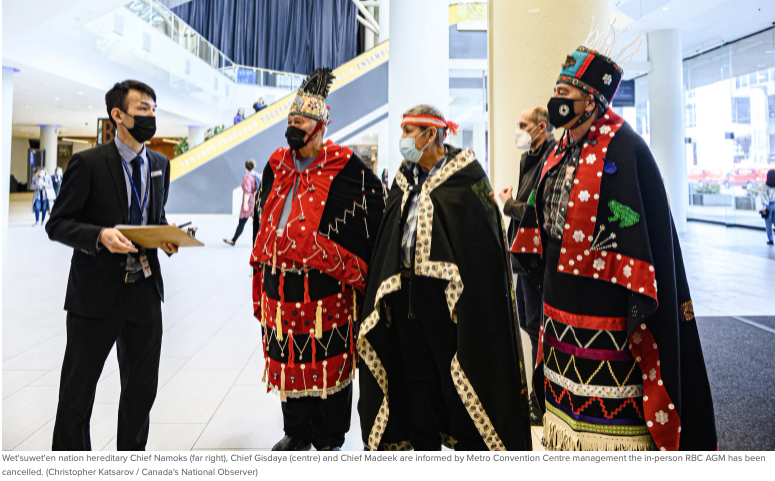 “Today is one of the highest insults I've ever received as a chief,” Chief Namoks said. “You’ve seen the violence (on Wet’suwet’en territory); I think today's insult was bigger.”

“They wouldn't even send anybody out to apologize for cancelling the RBC meeting on such short notice. We travelled across from our lands in British Columbia to here, and they don't even apologize to high chiefs?… They pretend we don't exist, and … treat us as if we're not human.”

And then, of course, there was a federal budget this week as well. The single biggest climate item was the controversial tax credit for carbon capture, expected to cost $2.6 billion over five years. The budget also laid out $1.7 billion over the same period for zero-emissions vehicles and a suite of other climate-related measures.

Energy efficiency is one of the high-potential, low-cost measures across many sectors in that IPCC chart and there was an international scorecard released this week. You can see where the top 25 energy-using countries rank.

Moving from the global to the local scale, check out the Heiltsuk Nation’s clean energy conversion efforts. (They’re putting the rest of B.C. to shame.)

“The remote coastal First Nation has weaned a third of its homes off fossil fuels, making climate gains communities in the rest of B.C. can only aspire to,” reports Rochelle Baker.

“To further its clean energy transition, Heiltsuk Nation has lined up another $5 million in funding to provide an additional 250 homes in Bella Bella with energy-efficient heat pumps.” That will cover 90 per cent of the community’s households.

Always happy to share good news about electric school buses. The Canada Infrastructure Bank just made a deal to finance up to 3,500 new zero-emission buses for kids in Quebec.

@cib_en and @Fedeautobus have completed an agreement for the CIB to invest $400 million towards the financing of up to 3,500 #zeroemission school buses. https://t.co/lV70sTxxtr

In other electrification news, Norway continues to show what’s possible with EVs. The country set a record in March: 86 per cent of car sales were full electric.

A new record: 86% of new car sales in Norway were full electric vehicles in March 2022

I’ll leave you this week with a video update from the Okavango Delta. The Canadian company ReconAfrica has secured drilling rights in the Kavango Basin of Namibia and an adjacent area in Botswana. The video is narrated by the indefatigable George Monbiot, you’ll hear from several of the local opponents but many of their faces have been blurred so they don’t end up in prison, or worse.