Sometimes it’s the little things that stick in your mind. This week, even as climate disasters swept continents, it was a weekend weather forecast, eight years old.

In 2014, Évelyne Dhéliat presented a mock forecast for Aug. 18, 2050 on France’s TF1. She was highlighting the long-term risk of heat waves in France by the middle of the century. Dhéliat’s weather map is almost exactly the one now blazing across French screens for this weekend — 28 years and two months early.

In 2014, this French weather presenter announced the forecast for August 18, 2050 as part of a campaign to alert to the reality of climate change. Now her forecast that day is the actual forecast for the coming 4 or 5 days, in mid-June 2022. pic.twitter.com/10vAIICXNn

Twenty-eight years early is enough to stick in your mind, but so are those two months. It’s only mid-June and we’re already seeing brutal heat waves around the world, including vast areas of the United States.

Over 100 million Americans were urged to stay indoors and shelter from the heat and humidity this week. In some states, schools shifted back to remote classes. In Kansas, thousands of dead cattle were rounded up by forklift. In California and the Southwest, “walls of fire” are racing through forests.

And those lucky enough to avoid scorching temperatures were hit by floods. Ten thousand people were evacuated from in and around Yellowstone National Park after torrential rain destroyed roads and bridges and washed buildings into rivers. “I’ve heard this is a 1,000-year event, whatever that means these days,” said the park superintendent.

It’s against that backdrop of mayhem that Dr. Tim Takaro was marched off to jail. B.C. Supreme Court Justice Shelley Fitzpatrick threw the book at Takaro and sentenced him to a month behind bars for protesting the Trans Mountain pipeline expansion. Tsleil-Waututh Nation member William George was given 28 days in jail back in May.

Tim Takaro is one of the most mild-mannered, thoughtful guys you’ll ever meet. A medical doctor, he’s recently retired from his perch as associate dean of health sciences at Simon Fraser University, itself perched right above the Trans Mountain tank farms on Burnaby Mountain that the local fire department says it could not control in the event of an accident.

Takaro spent several years writing reports and giving input to the Trans Mountain assessment. “And I exhausted all those routes and had my science ignored. And the whole process was rigged. And so that's what led me to nonviolent civil disobedience,” he told Cloe Logan.

And so Takaro scaled one of the trees slated to be logged to clear the way for the new pipeline and spent the better part of 16 months in a makeshift treehouse along the Burnett River.

“I never thought I would do this, but the American Medical Association points out that ethical responsibilities usually exceed legal duties,” he says.

Takaro isn’t embellishing when he talks about ethical responsibilities and trees are not his foremost concern. We know, generally, that millions of lives are at stake in the climate fight but researchers are now calculating ever more precisely how many of us are likely to be killed from each fossil-fuelled tonne of carbon.

A new “Lives Saved Calculator” was just released by a collaboration of experts from universities and energy firms called the Climate Impact Lab.

Before we jump into the numbers, it’s important to note the lab is only calculating direct heat deaths. The analysts aren’t able to include people killed by storms or more indirectly by drought-induced famine, civil wars, migration or any of the myriad cascading consequences of climate disaster. Nor are they including land defenders or air pollution from the fossil fuel industry which kills nine million people a year.

And they’re a group of Americans, so they’ve structured the calculator to show how many people around the world would be saved if U.S. states decarbonize their electricity grids or get to net-zero by 2050.

The upshot? They calculate a total of 7.4 million lives saved over this century if the U.S. cuts emissions to net-zero.

Texas alone would save 174 thousand lives just by cleaning up its grid and over one million lives if it cut climate pollution to net-zero.

That last number — over one million lives — is an important one for Canadians because Canada’s emissions are pretty much the same as Texas’.

A note on heat pumps

A surprising number of you wrote in after last week’s newsletter about heat pumps. And so, for all the heat pump geeks out there, here are a couple more tidbits:

Carbon Brief recently published a guest post, How heat pump sales are starting to take off around the world, and those of you wondering about heat pumps during a Canadian winter might be interested in this case study from Fort St. James: Is Using a Heat Pump in the North Feasible? (Thanks to Brady Faught for highlighting it.)

There was a dustup this week over some leaked documents from Natural Resources Canada that led the Globe and Mail’s editorial board to conclude plans to cut emissions from the oil and gas sector are “too ambitious.” Tip of the hat to Dan Woynillowicz for pointing out an “interesting juxtaposition” in the ed board’s recent pronouncements:

March saw an all-time high for lobbying the feds and Environment Canada is now one of the most frequent targets.

Adding fuel to the old question of whether we’d have climate change licked if we could get the OWM out of the way, Corporate Knights declared an all-women podium in the global competition for most sustainable city:

“The mayors of the top three cities in this year’s Sustainable Cities Index — Stockholm, Oslo and Copenhagen — are all women, but the trend is not unique to famously progressive Scandinavia; from Bogotá to Mexico City to Accra to Tokyo, female mayors around the world are distinguishing themselves as climate leaders. Indeed, 50 per cent of the top 10 cities in the index are led by women.”

Many of the boldest moves have come from female mayors. Think Anne Hidalgo, who ripped up the old boys’ network and the highway along Paris’ famed Rive Gauche. She’s catalyzed an amazing transformation in the French capital. Hidalgo was re-elected with a vision of a “ville du quart d’heure” (15-minute city), which Valérie Plante cribbed for her re-election campaign in Montreal.

If you haven’t been following Hidalgo’s systematic transformation of Paris from a city built for cars into one for humans (already over 1,000 kilometres of bike lanes), maybe check out Not Just Bikes’ video.

Activists have ramped up their protests against old-growth logging in B.C. Protesters are blocking bridges, tunnels and highways demanding that Premier John Horgan live up to a campaign promise to protect remaining ancient forests. 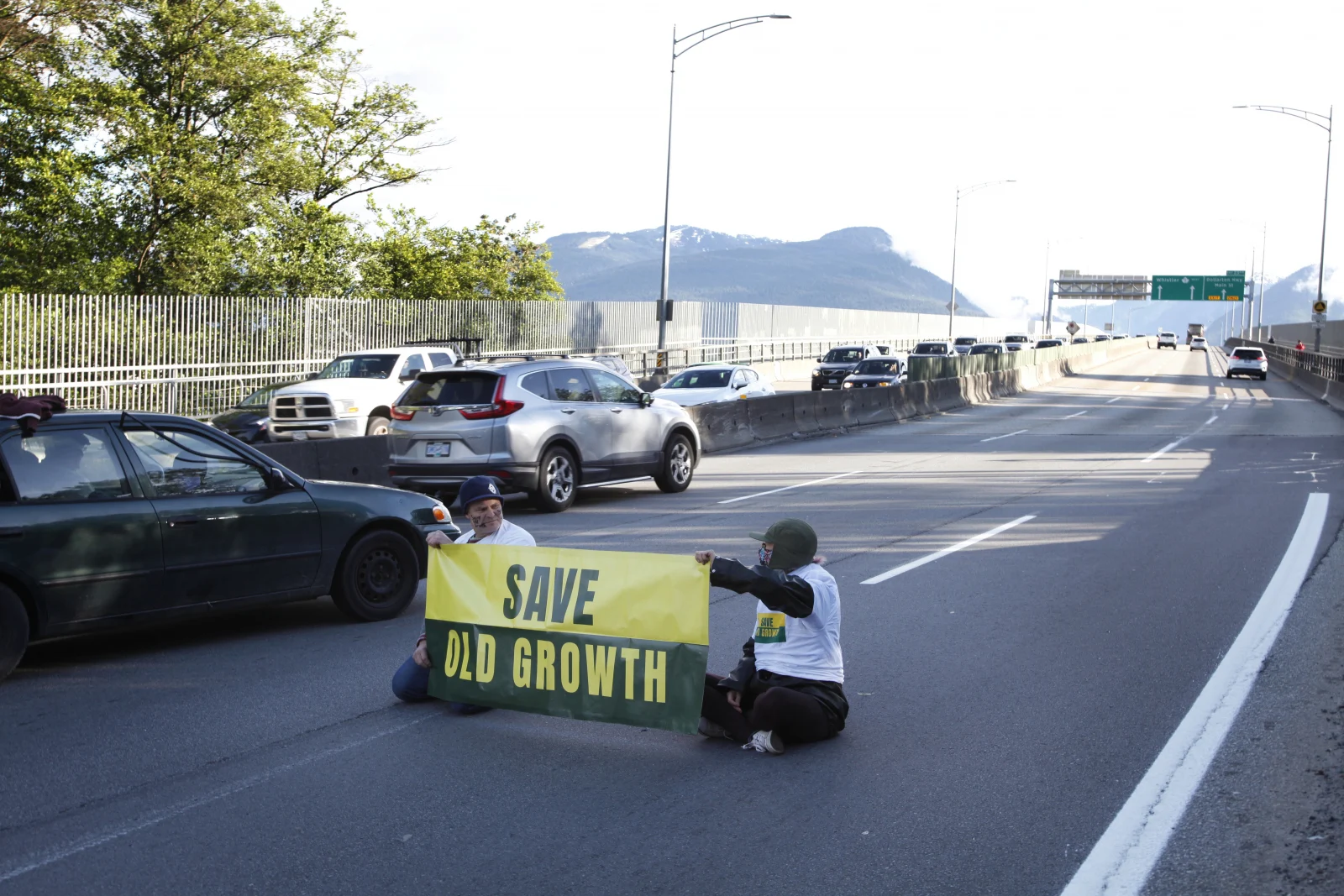 Rochelle Baker reports Trevor Mckelvie had to go for hip surgery after a ladder collapsed “not long after an angry motorist held up by the blockade on the Patricia Bay Highway broke pieces off a support structure Monday morning.”

And Zain Haq, one of the co-founders of Save Old Growth, fears his activism has made him a target for deportation. “Whether I’m in Canada or back home, I think political persecution is going to be common if you're going to be on the right side of history.”

“Fossil fuel producers and financiers have humanity by the throat,” declared the UN secretary general on Friday.

You may not have heard of UN-backed organizations like GFANZ, but the big banks have. Over 500 of the world’s financial giants are members of the umbrella organization set up by Mark Carney and company at COP26 in Glasgow last year (hence the name: Glasgow Financial Alliance for Net Zero).

GFANZ is part of the UN’s Race to Zero campaign, which just updated its membership criteria. It now requires members to “phase down and out all unabated fossil fuels as part of a just transition.” Existing members like RBC, CIBC, TD, Scotiabank and BMO have one year to comply. They “must restrict the development, financing, and facilitation of new fossil fuel assets” and publish transition plans showing what actions they will take within 12 months, two to three years and by 2030.

That would be a big turnaround — last year, the Big 5 loaned or invested $165 billion in fossil fuel companies, an increase of $61 billion from 2020. For its part, GFANZ also issued new guidance highlighting the need for financiers to ensure “retirement plans” for “high emitting assets.” Stay tuned…

Regular readers know I have a real soft spot for electric school buses. So it’s great to see a surge in orders. There are now over 12,000 on order or already carrying kids to school in the U.S. Interestingly, the biggest source of funding is the settlement Volkswagen had to pay after its tailpipe emissions-cheating scandal. 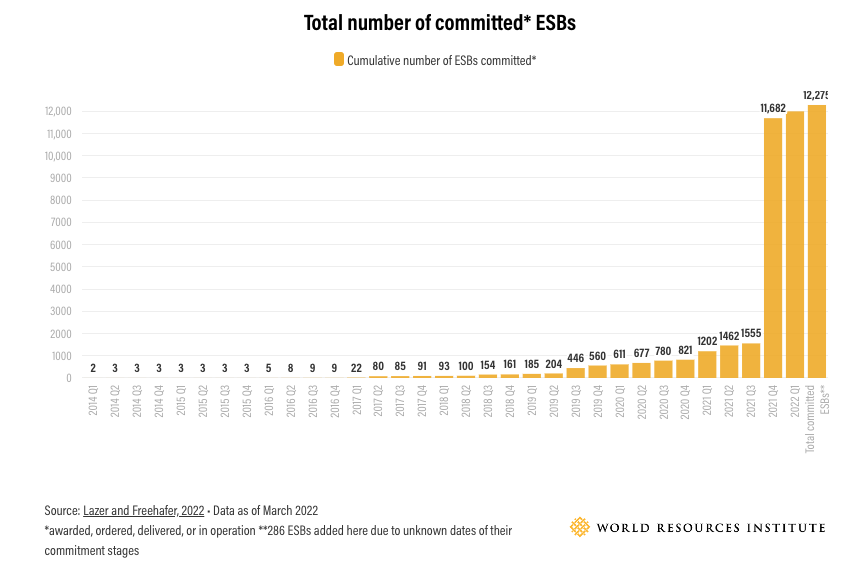 You may know Evraz as the Russian oligarch-backed company supplying steel for the TMX and Coast GasLink pipelines. This week, Canadian satellites busted the company for spewing massive amounts of methane from one of its coal mines in Russia.

Montreal-based GHGSat has five satellites in orbit monitoring methane emissions. The coal mine in Russia is the biggest methane plume it’s ever seen — almost 90 tonnes per hour, enough to power hundreds of thousands of homes.

Citing the latest IPCC reports and the “urgency of climate action,” UdeM will divest its $420-million endowment from fossil fuels over the next three years.

"We must not lose sight of the influence we have in society as a community of thinkers, teachers, scientists and students with bright futures," said Daniel Jutras in a statement from UdeM. "By divesting from hydrocarbons, the university is leading by example and coming down on the side of the science, which is imploring humanity to accelerate the energy transition."

SaskPower is buying the electricity for the provincial power grid and says Saskatchewan now has 600 megawatts of renewable generation.

An ocean of possibility

The famous tides in the Bay of Fundy have long inspired engineers but their sheer power has destroyed most efforts to harness them for electricity. Now, a new project with a new approach has started selling tidal power to the grid.

Instead of turbines on the seafloor, Sustainable Marine’s new project uses a floating platform that reverses direction as the tide changes.

NEW: After a century of dreams, plans, developments and defeats... a renewable energy project on the Bay of Fundy has harnessed the world's highest tides, and is now selling that electricity to the Canadian power grid. pic.twitter.com/IweipBvkqM

An entirely different approach to ocean energy is underway in Japan where successful trials just finished on a generator that taps the constant flow of ocean currents. With over three years of testing complete, the plan is to install turbines in the Kuroshio Current, running along Japan’s east coast.

I’ll leave you this week with a video Tim Takaro filmed before his sentencing. “Future generations will look back on what we did in 2022 to protect them and the planet,” he say. “I can say, ‘I did everything I could.’ I hope you can too.”

That’s all for this week. Thank you for reading Zero Carbon. Please forward it along and feel free to write with feedback or suggestions at [email protected]