Mychaylo Prystupa climbed aboard the Habitat to write about how Pacific Wild gets visual stories from remote locations to audiences around the world.

Last spring, every news outlet had it: a daily, unfolding enviro-political struggle on the remote central B.C. coast, shown with world class 4K video and photography.

Heiltsuk said the populations of the tiny oily fish were on the brink of collapse. So when the commercial fishery was officially opened in late March against their wishes, and with no warning by the Department of Fisheries Oceans, Heiltsuk sped out angrily in boats to intersect.

That’s when the Habitat ship sailed in too, armed with state-of-the-art visual recording equipment and a crew of three.

"This is about First Nations people… fighting for the very survival of arguably one of the most important species on the coast," said Ian McAllister, wildlife photographer and co-founder of Pacific Wild. 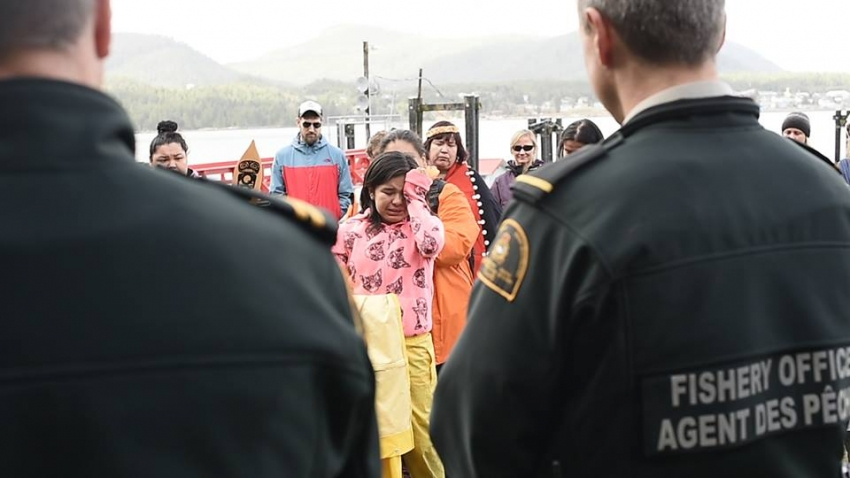 "There’s not a species that can’t trace their existence on this coast back to the herring,” he added.

From the deck of the Habitat, McAllister flew out a video drone to hover above a large seine herring boat that he'd tracked for days to the annoyance of the boat's captain and crew. A scuba-diver then went below to capture the boat's vacuums sucking up hundreds of tonnes of netted herring with industrial efficiency.

Pacific Wild's resulting imagery that week was carried by national and international media. Combined with the group’s Facebook site, the conservation group, which insists it took a “back seat role” to the Heiltsuk, ensured the herring war was seen by millions of people.

For a small enviro-charity, operating in such a remote part of the B.C. coast, it was a TKO. 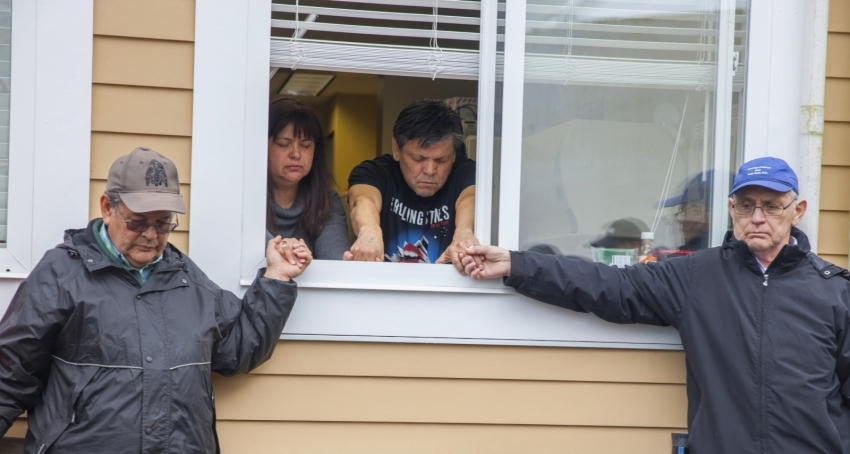 Heiltsuk leaders Marilyn Slett and Kelly Brown praying with Elders during their "lock down" occupation of the DFO office on Denny Island in April. Photo by Mychaylo Prystupa.

Showdown with the DFO

Crews talked with PR-sophistication about “news cycles” and sailing to a high-speed Internet dump spot to upload just-shot and edited material to Dropboxes for the media. The TV networks ate it up too —not just the wildlife visuals, but Pacific Wild’s interviews with scientists and Heiltsuk officials too.

A crew member joked that they had made mainstream media "look so good."

Ultimately, Heiltsuk leaders Marilyn Slett and Kelly Brown locked themselves inside the DFO office to force a negotiated settlement. By morning, and still sleepless, they held their hands out a window to Elders for a group prayer.

Eventually, a DFO director flew up under pressure, arriving to a respectful, but emotional welcoming. Nearly everyone —from Elders to kids —wore war paint and solemn faces. There were two days of talks. A deal was finally struck to end the dispute.

As they did, there was ironic news. The herring pursued by the commercial fishery were too few in size and number to bother catching. This was proof of how fragile the stocks had become, locals said. 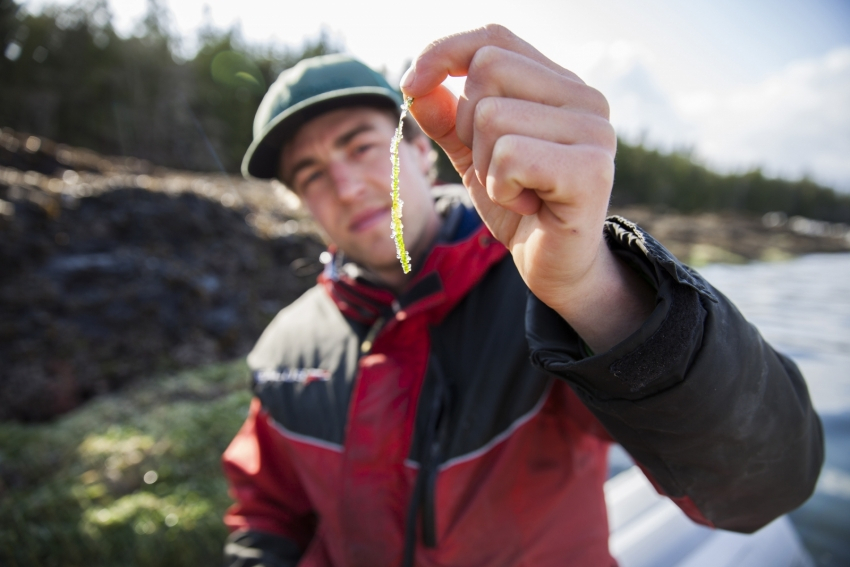 With the protests subsiding, Pacific Wild resumed its visual documentation of what McAllister calls “one of the greatest natural history events on planet earth”: the annual herring spawn on B.C.’s coast.

It anchored April 1st in such a remote and people-less ecological paradise on the B.C. central coast that one had the feeling of being a Robinson Crusoe castaway on a remote Pacific island.

The undisclosed spot — with breathtaking azure-blue / green waters — was so chosen for the female herring now bursting out sticky roe eggs by the millions. It’s an annual protein-feeding frenzy for orcas, sea lions, sea birds, wolves and grizzlies, that are all increasingly under stress due to fragile herring stocks, said McAllister.

Pacific Wild’s approach is to tell this story with world class visuals, and recast the herring with the public as the “foundational” species for the B.C. coastal ecology. Nearly everything that breathes around here depends on the fish and its eggs, including local people, he argues.

“It’s unfortunate that there are not more journalists and outlets that are covering these issues, because they’re so important —not just to Canadians, but to people around the world. We truly have a globally unique ecosystem on the B.C. coast.”

As one climbs aboard the Habitat, three questions are asked: Did you bring a newspaper? Chocolate-covered coffee beans? Baileys? Answering “no” or "sorry" results in lessons about the proper things to bring to an ocean craft, amid laugher from crew.

But a vacation this is not. Straight away, it’s shoot time. With a perfect clear blue sky, 23-year-old April Bencze from Campbell River clambers on deck. She's wearing a state-of-the-art bubble-less rebreather for stealth underwater photography. Her target: a hectare of thousands of surf scoter birds spotted nearby, feasting on herring roe.

“I watch as thousands and thousands of birds take off around me —all like little float planes taking off.”

"It sounded like a thunder storm. It was pretty insane."

Later Bencze jarringly describes her experience in the murky waters as "swimming in sperm and bird shit.

Fellow Vancouver Islander Tavish Campbell, 25, taxis Bencze back and forth in the zodiac. The photographer/diver, who recently returned from Antarctica, also pilots the Habitat. While ashore, he can’t resist lifting the sticky herring roe stuck to kelp to his mouth for a cold salty treat.

"I just enjoy the taste of it,” said Campbell.

Smiling, he remarks about how all the wildlife around here eat this too. "There’s just this incredible richness at this time of year."

The pair return top-side to the ship as McAllister flies up another drone, with its 4K camera, to capture a bird's eye view of the estimated 10,000 surf scoters below.

“It would’ve been so perfect!” he said, laughing.

A Celebration of Herring

A Celebration of Herring, video produced by Pacific Wild in April of 2015.

Herring stocks on the "throes of collapse"

​By late evening, with the moon and stars brightly lit, the satellite phone rings.

Heiltsuk fisherman Frank Brown calls to congratulates McAllister for supporting his community's communications. There’s talk the herring issue has never been so widely covered, despite years of Aboriginal protests.

“The herring are going to be there and grow, and meet our food needs, and support our livelihood," said Brown.

"One of the key pieces is the promise for joint management and we have to hold the government of Canada's, and its agent DFO's, feet to the fire to make sure that that commitment is made,” he added.

McAllister knows this environmental progress comes with economic pains. Herring fleet captains, whose radio chatter he recorded over the two weeks of drama, were furious.

“There was a lot swearing, yelling, finger-pointing, blame. A lot of blame of First Nations and Pacific Wild.”

But ultimately, "they couldn’t find fish," he said. "Too small, too juvenile. Everything that the fleet was reporting indicates fishing overkill and unsustainable stock that by all accounts is in the throws of collapse.”

“This is exactly what people in Bella Bella have been saying for years. It’s unconscionable that DFO isn’t recognizing those concerns.”

"And yet the First Nations have an alternative; they have a solution to this fishery, which is their traditional [roe on kelp] fishery, which collects the eggs but allows the fish to spawn another year.”

Before sunrise, crews are already up scanning with binoculars for wolves. None today. Yesterday they captured a pack on the shorelines as they munched on herring roe. But now, it's dark and rainy, so the crew sails home for fuel and food.

En route, a half dozen dalls’ porpoises playfully jump out just ahead of the cruising ship for minutes, as if to tease, 'We’re much faster than you.’

The Habitat stops briefly in Klemtu waters where there’s one bar of cell service. They want to upload to Instagram and Facebook, and check emails. A satisfying Globe and Mail article declares the herring war over.

"I love this guerrilla marine media we got going on,” says McAllister.

He then checks his laptop and verifies that a new live webcam set up underwater recently is operational. Schools of herring and tuna float past in real time on the Pacific Wild website.

“We could ping a guy in New York, and he could watch this on his cellphone in an elevator,” he boasted. The crew is upbeat.

Arriving at Denny Island, his home across from Bella Bella, McAllister reflects wistfully on the battle to push out the herring boats.

“That’s potentially not a bad weekend, saving 700 tonnes of herring. That’s going to make a lot of sea lions happy.”

“We’re trying to tell a story...we’re obviously focused on the natural history, so wolves and bears eating herring eggs, and whales and sea lions and dolphins —but also documenting the cultural importance of herring.”

"So First Nations traditional spawn-on-kelp fishing methods and the industrial kill fishery —these are all part of the story. We’re trying to capture it all from a lot of different angles."