A girl stands beside her sister bedridden with influenza in November 1919. Photo from Library of Congress

In Nova Scotia at the beginning of the pandemic, most businesses shuttered their doors to contain the spread. Universities, churches, bowling alleys — notices announcing a mandated six-week closure were plastered over windows everywhere. The province’s media outlets ran stories with instructions for protection against exposure. The messages were simple: Wash your hands. Keep your distance. Wear a mask.

Some of those decisions such as spraying walls with mercury raised eyebrows.

This was not the COVID-19 pandemic.

On Oct. 1, 1918, the Board of Health ordered the fumigation of Oxford School in Halifax by spraying the walls down with mercury. “The health of workmen and others” was at stake.

Headlines from the First World War dominated the front pages of newspapers, but the influenza would kill more than twice as many as the Great War ever did by the time it ran its course.

More than a hundred years later, with the country still in the grips of a seemingly endless pandemic that seems to be approaching an “endemic” stage, it’s interesting to look back to see what lessons, if any, can be learned.

A nurse demonstrates how to create a mask in this British public service announcement filmed in 1919. Video from "Dr. Wise on Influenza," British Film Institute, 1919

The Great War Veteran's Association Emergency Hospital in Kingston, Ont. This hospital opened for a month in the fall of 1918 to care for women and children sick with influenza. Photo from Archives of Ontario / Defining Moments Canada

After 1920, the disease, inaccurately labelled the “Spanish flu,” faded from public consciousness, eclipsed by ensuing decades of decadence, poverty, and war.

“We stand with our hands over our hearts every Nov. 11. But we forget other things,” said Jane Jenkins, an associate professor at St. Thomas University in Fredericton, who has been studying influenza in New Brunswick for more than a dozen years, told Canada’s National Observer.

“We forget the 1918 influenza pandemic.”

There was no Dr. Theresa Tam, no video updates, no Health Canada, no CERB, and definitely no rapid testing. Scientists could not even identify the virus, much less sequence its genome. Without a national department of health, provinces were left to fend for themselves. The jurisdictions in Atlantic Canada were still among the safest places to be in the country.

In Nova Scotia, doctors and nurses were sent to help with outbreaks in Boston where they received vital information on the nature of the illness. New Brunswick established the first provincial Department of Health just days before the virus invaded its borders.

The science was limited, but early intervention, clear communication, and interprovincial co-ordination helped to save thousands of lives in Atlantic Canada from the worst of the influenza. One hundred years later, these factors have once again distinguished its response to a very different pandemic.

From left to right: Dr. Hawkins, Dr. MacKay and Dr. Hattie were credited with keeping the death rate low in Nova Scotia during the 1918 influenza pandemic. Photo from Nova Scotia Museum

New Brunswick's Alice Tilley poses for a photograph in a mask in the fall of 1918. Photo from Provincial Archives of New Brunswick

In 2007, Allan Marble realized next to nothing had been written about the history of influenza in Nova Scotia. Born in 1939, he grew up hearing family stories about the two world wars, but not one about the influenza pandemic.

“Nobody talked about it, they just wanted to forget about it,” said Marble, the chair of the Medical History Society of Nova Scotia in an interview with Canada’s National Observer.

“It was just too much of a tragedy.”

To fill in the gaps in the story, Marble used newspapers and death certificates to measure the influenza’s toll in Nova Scotia and to understand the province’s response.

His research revealed the pandemic killed about 2,000 people as it swept through the province from 1918 to 1920. No county was left untouched.

“We were fortunate because we had three doctors in Halifax who took immediate action to try to deal with the influenza,” Marble said.

Hawkins sent doctors to Boston on Oct. 2 to assess the pandemic there and report back on what measures Nova Scotia should take.

On Oct. 4, MacKay recommended the board of health close public buildings in Halifax. Schools, universities, libraries and theatres were shuttered the following day. Public messaging wasn’t far behind.

People were advised to avoid public gatherings — just as, at the onset of the current pandemic, Stephen McNeil, former premier of Nova Scotia urged people to “stay the blazes home.”

The death rate from the influenza pandemic in Nova Scotia was 3.18 per 1,000 people — about half of that recorded in the western provinces. During this pandemic, the average death rate was much lower.

On Oct. 7, 1918, the Halifax Evening Mail published an article headlined “The Influenza Epidemic Has Not-Yet Reached Halifax and We are Fighting Its Advance: Citizens Are Readily Complying With Orders From The Health Board.”

The word “comply” is key here, explains Marble. Other than some churches holding services outside, there were no reports of people disobeying public health measures. He believes compliance distinguishes Nova Scotia in its COVID-19 response today.

By contrast, in Alberta, flagrant disregard for health measures was the norm during the influenza. Mark Osborne Humphries, professor of history at Wilfrid Laurier University, notes that “Calgarians routinely complained to newspapers that masks were grotesque, depressing, and even dangerous if used improperly.”

“When ‘offenders’ were arrested and brought before the local court, it was often pointed out that those present to hear the cases — including judges — were not actually wearing the masks themselves as prescribed,” he writes in The Last Plague: Influenza and the Politics of Public Health in Canada.

In Alberta, flagrant disregard for health measures was the norm during the 1918 influenza. “Calgarians routinely complained to newspapers that masks were grotesque, depressing, and even dangerous if used improperly.”

Nova Scotia wasn’t the only province in Atlantic Canada that responded immediately to the influenza. Across the border, the government of New Brunswick closed public places on Oct. 9, 1918.

“These were essentially social-distancing regulations, and they had an impact,” said Jenkins, the professor from Fredericton.

At the time, New Brunswick was the only province in Canada — indeed, in the entire British Empire — with a minister of health. This minister, William Roberts, began his term on Oct. 4, 1918, days before the provincial shutdown.

Roberts’ early intervention is credited with containing the spread of the influenza. This intervention also helped neighbouring Prince Edward Island to institute its quarantine. Unfortunately, the lack of public health infrastructure still meant that a 10th of New Brunswick’s population suffered through the influenza and 1,400 people died from it.

Though historians such as Humphries and Marble have compiled data on case and death numbers in 1918, the numbers accounting for the virus’ spread throughout the eastern provinces remain unclear.

“One of the main problems that we have with studying the influenza is that the data wasn’t collected in the same fashion all over the provinces,” said Marcelle Cinq-Mars, an archivist from the Library and Archives Canada. “Even the data that was collected sometimes was not very methodical.”

Poor data collection was also an issue at the beginning of the COVID pandemic, though many jurisdictions managed to make improvements with regularly updated public dashboards on their public health websites.

Though much of this success comes down to a geographical luck of the draw, widespread rapid testing and consistent public health messaging have also been credited for controlling the spread of the virus in New Brunswick today. 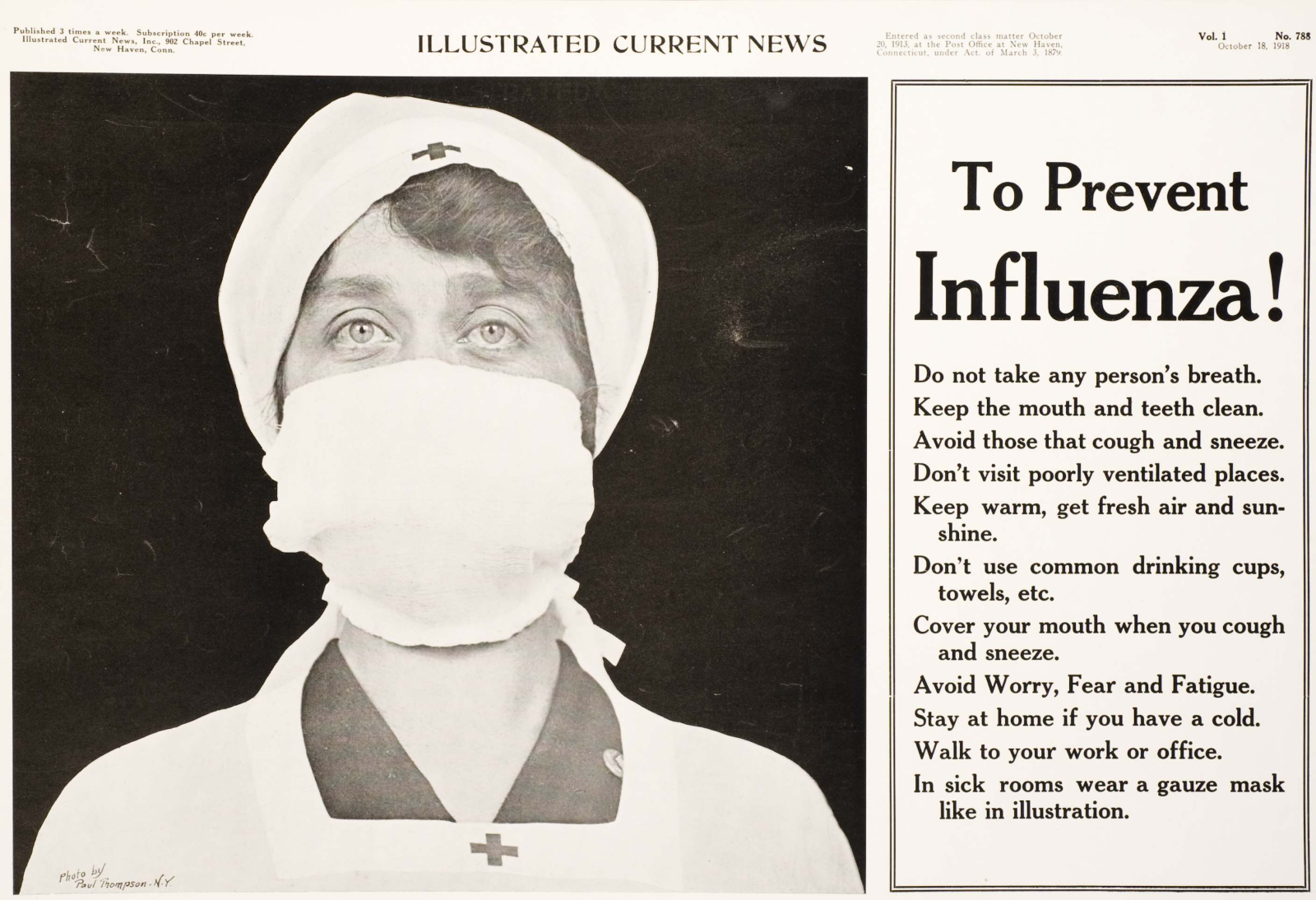 A newspaper clipping from New Haven, Conn., recommends masking, quarantine, and ventilation to contain the spread of influenza. Photo from U.S. National Library of Medicine

The staff of the Canadian Bank of Commerce pose for a masked group photo in Calgary, 1918. Photo from Defining Moments Canada

It is tempting, in retrospect, to look at the similarities between the two pandemics — closures, public messaging, masks — and draw the conclusion that history is coming full circle.

Jenkins has been asked repeatedly about the parallels.

“They’re similar because they’re both pandemics,” she said in an interview, “But they’re different types of viruses, they have different epidemiological consequences and impacts, and the world is a different place today than it was in 1918.”

Newfoundland and Labrador, for example, were not incorporated into Canada until 1949. While New Brunswick and Nova Scotia were “at the cutting edge of public health reform in the early 20th century,” as Jenkins said, these reforms did little to contain the spread of influenza in their neighbouring dominion.

“There was very little public health infrastructure [in Newfoundland and Labrador] in 1918,” said Anne Budgell, author of We All Expected to Die: Spanish Influenza in Labrador 1918-1919.

“The only doctor in all of Labrador back then was living in Northwest River in central Labrador and he got sick with the flu. There was no electronic communication whatsoever except for one telegraph station that was located in Battle Harbour, right down on the bottom of Labrador. If anyone wanted to send a message out from Okak, in northern Labrador, somebody had to travel by foot or dog team. It would take them more than a month to make that journey.”

This is not the only difference between Newfoundland and Labrador’s response to COVID-19 versus the influenza pandemic. While Canada has prioritized the vaccination of remote Indigenous populations during COVID-19, the government did not extend this consideration to Indigenous communities 100 years ago.

“Indigenous people were blamed for getting sick [in Newfoundland],” said Budgell. “They were judged to be physically inferior; they were judged to be not as intelligent. There was a totally racist response by officials who were covering their own rear ends trying to find reasons to explain why 70 per cent of the people in two villages died.”

Immigrants were also scapegoated for introducing the virus to North America, as they would be 100 years later in former U.S. president Donald Trump’s repeated framing of COVID-19 as the “China virus”— which was blamed for the sharp increase in hate-based violent attacks against East Asians in the United States and Canada.

“It was the status of immigrants as cultural or visual outsiders that identified them as a threat and thus made them the objects of medical scrutiny,” wrote Humphries in The Last Plague.

As a result, screening and quarantine efforts were focused mostly on ships carrying immigrants in from overseas. In reality, according to Humphries’ research, troops moving across the country and returning over the U.S. border were the main source of spread across Canada.

The influenza pandemic, then, is not best understood as a carbon copy of our current circumstance, but rather as a reflection of our present moment in a funhouse mirror: the grotesque vision of what a pandemic looks like without the advances in medical science, public health infrastructure, and civil rights that were gained over the 20th century. It is a vision far too dissimilar to compare to the present directly, yet far too familiar to ignore.