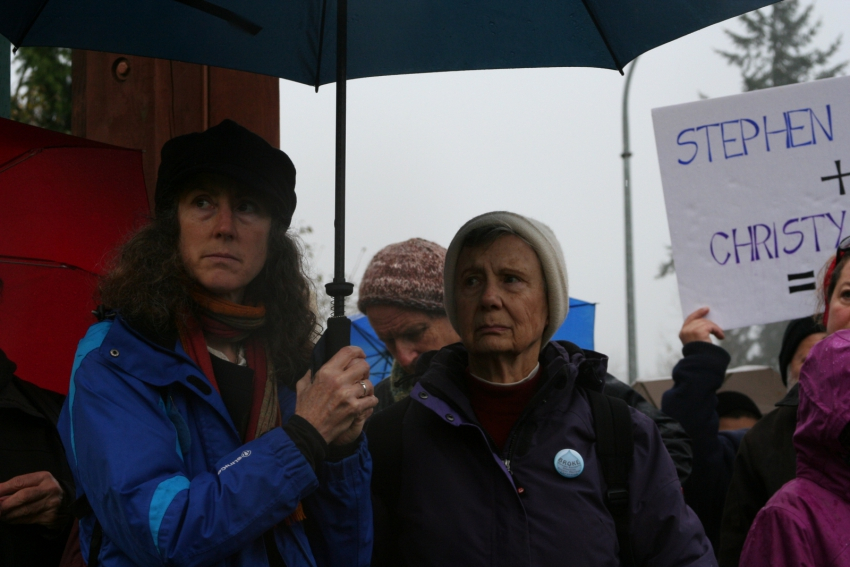 Barbara Grant standing with her daughter Ruth Walmsley on Burnaby Mountain. All photos by Peter Morelli.
Previous story
Next story

Barbara Grant criticized the NEB hearings of the Kinder Morgan pipeline expansion as a "sham" and spoke out about the danger before crossing the police line to be arrested. At 84, she's the oldest person arrested on Burnaby Mountain so far.

An 84-year-old retired librarian and concert pianist, Barbara Grant, gave a sharply-worded speech on Burnaby Mountain, criticizing the National Energy Board and Kinder Morgan before stepping across the police line and getting arrested.

"Back when I was a young adult raising a young family, the big issue was the nuclear arms race ...but now we’re looking at another disaster of our own making in the form of climate change — brought about at least in part by our use of fossil fuels," she said.

"The National Energy Board process by which this pipeline is being evaluated does not allow us to even raise this greatest of all objections. NEB process is a sham and contravenes our democratic rights," she said.

She spoke out against the Trans Mountain pipeline expansion, which proposes to build a pipeline through Burnaby Mountain to carry 890,000 barrels of diluted bitumen from Alberta to Burnaby's Westridge terminal. If approved, the pipeline would increase the number of oil tankers through Burrard Inlet by six to seven-fold.

"I want great grandchildren and their grandchildren to enjoy the childhood pleasures which I had, building sandcastles on the Spanish banks or Qualicum beach and camping and fishing on our beautiful lakes and rivers and in the mountains of British Columbia. The insanity of this pipeline (expansion) must stop! That is why I’m here."

Assembled protesters and supporters cheered Grant loudly. After further speeches had concluded, Grant then led the procession up the hill, flanked by her daughter, Ruth Walmsley, and a number of children, making the march a truly multi-generational demonstration.

After protesters reached the police line at the injunction boundary, Grant spoke to reporters. Those assembled waited for Sut-lut, the Sḵwx̱ú7mesh elder holding vigil at the drilling site to come down from the sacred fire and welcome those who were planning to be arrested into the area under injunction. Sut-lut was accompanied by her sister and child, and spoke of the need to protest peacefully, in order to set a good example for the children and future generations.

Once they had been welcomed into the site by Sut-lut and a song from her family, protesters began to cross the boundary line into the injunction zone and were arrested by police. Barbara Grant, easily identifiable by her purple rain coat and diminutive size in comparison to the police officers, crossed calmly, and was quickly ushered further into the site by RCMP.

Kevin Washbrook told the Vancouver Observer that Grant was driven off the hill to Squint Lake Park by police and released without charge.

Eight other protesters were arrested for crossing into Kinder Morgan's drilling site and are currently at the Burnaby RCMP detachment office for processing.