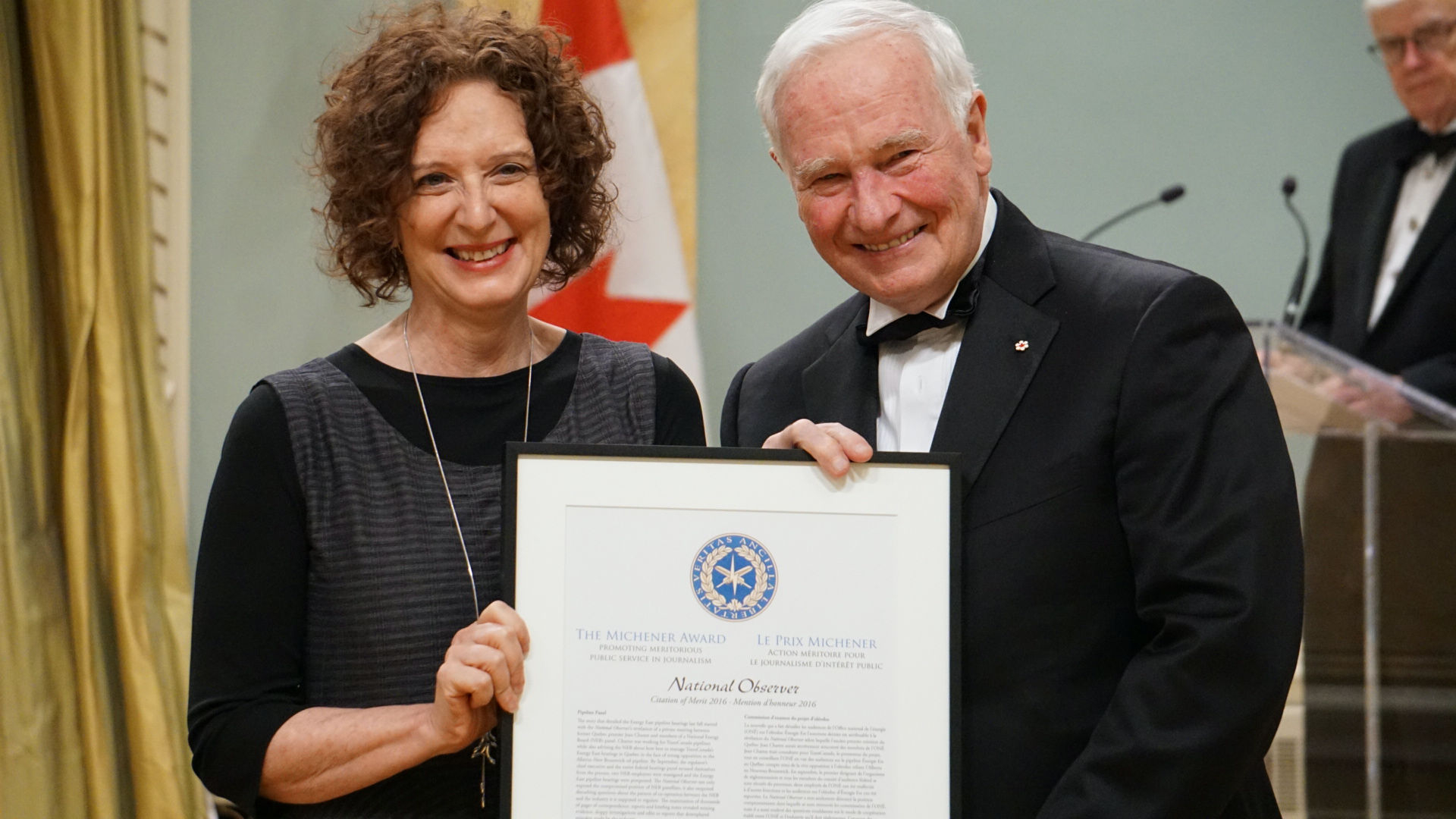 National Observer has been awarded a citation of merit at the Michener Awards, one of the most prestigious reporting awards in Canada, for its groundbreaking investigative series, The Charest Affair.

The award, which is comparable to the Pulitzer gold medal for public service by a newspaper in the United States, was given to The London Free Press for its two-year investigation into the death of Jamie High while under the care of London's Elglin-Middlesex Detention Centre.

The award's purpose is to highlight meritorious Canadian public service journalism. It was presented on June 14 at Rideau Hall, the residence of Governor General David Johnston and Mrs. Sharon Johnston, who hosted the ceremony.

"The little engine that could!" Governor General Johnston, said, as he congratulated National Observer founder and editor-in-chief Linda Solomon Wood.

“This was possible because National Observer asked tough questions about private meetings between federal officials and industry,” said managing editor Michael De Souza, in a speech at Rideau Hall that gave a retrospective of his series.

“We didn’t settle for boilerplate lines, talking points or excuses. We dug for the truth, and we found proof that a federal government organization—an independent tribunal—had misled the public and provided false information.”

After digging through files obtained via access-to-information legislation, De Souza revealed that the National Energy Board misled the public about private meetings with the company proposing to build the Energy East pipeline, TransCanada Corp.

Members of the board’s panel reviewing the oilsands expansion project had met privately with former Quebec premier Jean Charest, who was, at the time, a consultant for TransCanada. By September 2016, the regulator's chief executive and entire federal hearings panel had recused themselves from the process and the hearings were postponed.

The investigation triggered complaints to the federal lobbying commissioner, and the proactive disclosure of evidence by the NEB to the commissioner’s office to assist in a potential investigation. In January 2017, the Energy East hearing process was restarted virtually from scratch.

De Souza and Solomon Wood, emphasized that as the media landscape changes, it was important to demonstrate that media plays a vital role in strengthening public trust in Canadian democracy.

“Often we focus on the dangers and risks of the digital revolution, from the ‘fake news’ phenomenon to what it’s done to ad revenues,” said Solomon Wood in an interview after the ceremony.

“Tonight’s a chance to recognize how the web has also opened the doors wide to a new breed of journalists, new models of journalism and new opportunities for storytelling.”

In May, the Canadian Association of Journalists also awarded De Souza an outstanding investigative journalism award for the Charest Affair.

Started under Roland Michener, who was governor general from 1967 to 1974, the annual Michener Award was the first open to both broadcast and print media. It is given to news organizations, not individuals. Judges are influenced by the degree of public benefit generated by the entries.

The other Michener Award finalists are: CBC, Radio-Canada and The Toronto Star for their series examining the Panama Papers; The Globe and Mail for its series on questionable real estate practices in British Columbia; La Presse for its investigation of Quebec’s video lottery business; and The Toronto Star for its coverage of the shooting death of Andrew Loku.

Along with the Michener Award, two fellowships are also presented. Valérie Borde won this year’s Michener-Deacon Fellowship for Investigative Reporting, which she will use to investigate food safety oversight. Matthew Pearson won the Michener-Deacon Fellowship for Journalism Education for his proposal to develop a journalism teaching module and online portal for trauma.

“These aren’t easy stories to tell," said Solomon Wood. "They take tremendous resources, courage and sacrifice. But all of the stories we’re celebrating tonight make civic life in Canada not only better, but possible.

“This is what holds the powerful to account. This is what makes this democracy and this citizenship I treasure meaningful.”

National Observer has only

National Observer has only just begun. Imagine what the future holds for readers!
Mille remerciements.

Thank you! It takes our

Thank you! It takes our entire community to make it all happen. Thank you for reading, subscribing and engaging with National Observer!