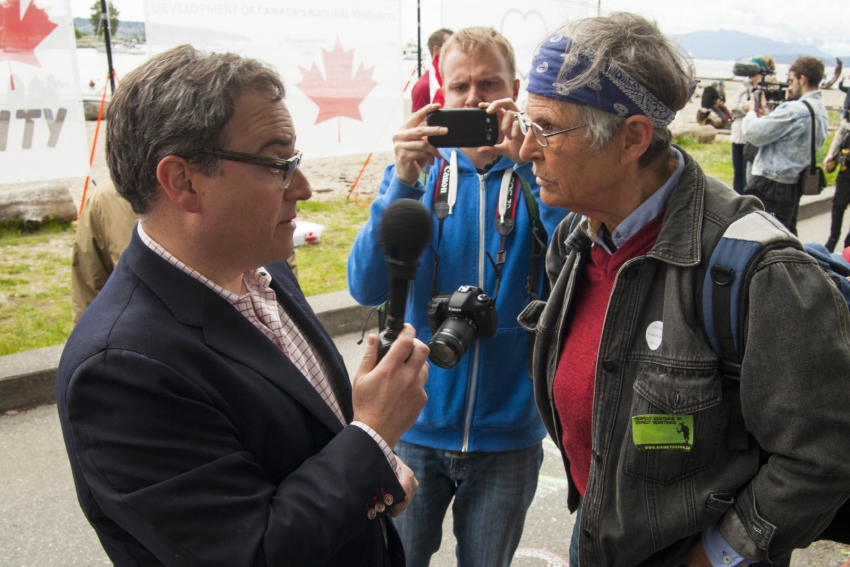 Photograph by Mychaylo Prystupa of Ezra Levant of Sun TV at a rally earlier this year in Vancouver.
Previous story
Next story

Sun TV fired first in what could be the beginning of a nasty civil war within Canada's conservative movement.

Preston Manning, founding father of the modern conservative movement and head of the right-wing Manning Centre, made a pair of surprising appearances recently in the Globe and Mail challenging Canadian conservatives to change their thinking on climate change.

"We also need to address environmental concerns, particularly as they interface with resource development...

Conservatives can play a big role in reconciling these interests. The words 'conservative' and 'conservation' come from the same root. Living within your means – something that fiscal conservatives believe in – is actually an ecological concept," the former Reform Party leader told the Globe and Mail last week.

Manning went further a few days later in a Globe and Mail opinion piece, offering "a few suggestions" on how to communicate climate change and the need to put a price on carbon:

"The 'good idea' the commission seeks to advance – and that I wholeheartedly support – is that for any economic activity, especially the production of energy, we should identify its negative environmental impacts, devise measures to avoid, mitigate or adapt to those impacts, and include the costs of those measures in the price of the product. It's the idea behind using carbon pricing to reduce greenhouse gas emissions."

Lilley bashed Manning in a bit titled "fake conservatives." He said that if a veteran conservative like Manning "no longer stands by [conservative] principles, then let's just admit that they've left the tribe and let them go."

Meanwhile, Levant called Manning a "flim flam man" (slang for "confidence man"). He accused Manning of using "jedi mind tricks" and "linguistic trojan horses" to "bamboozle the oil patch," all while "using his 1990s reputation to fundraise money from the oil patch" on behalf of the Manning Centre.

Levant repeated twice that the Manning Centre is "bankrolled by the oil and gas industry" during his on-air rant.

"Today, skepticism about the science and economics behind the theory of man-made global warming has been largely vindicated," Levant added in his Sun newspaper column. "And yet Manning chose this moment to switch sides."

This article appeared yesterday in PressProgress and is published with permission.