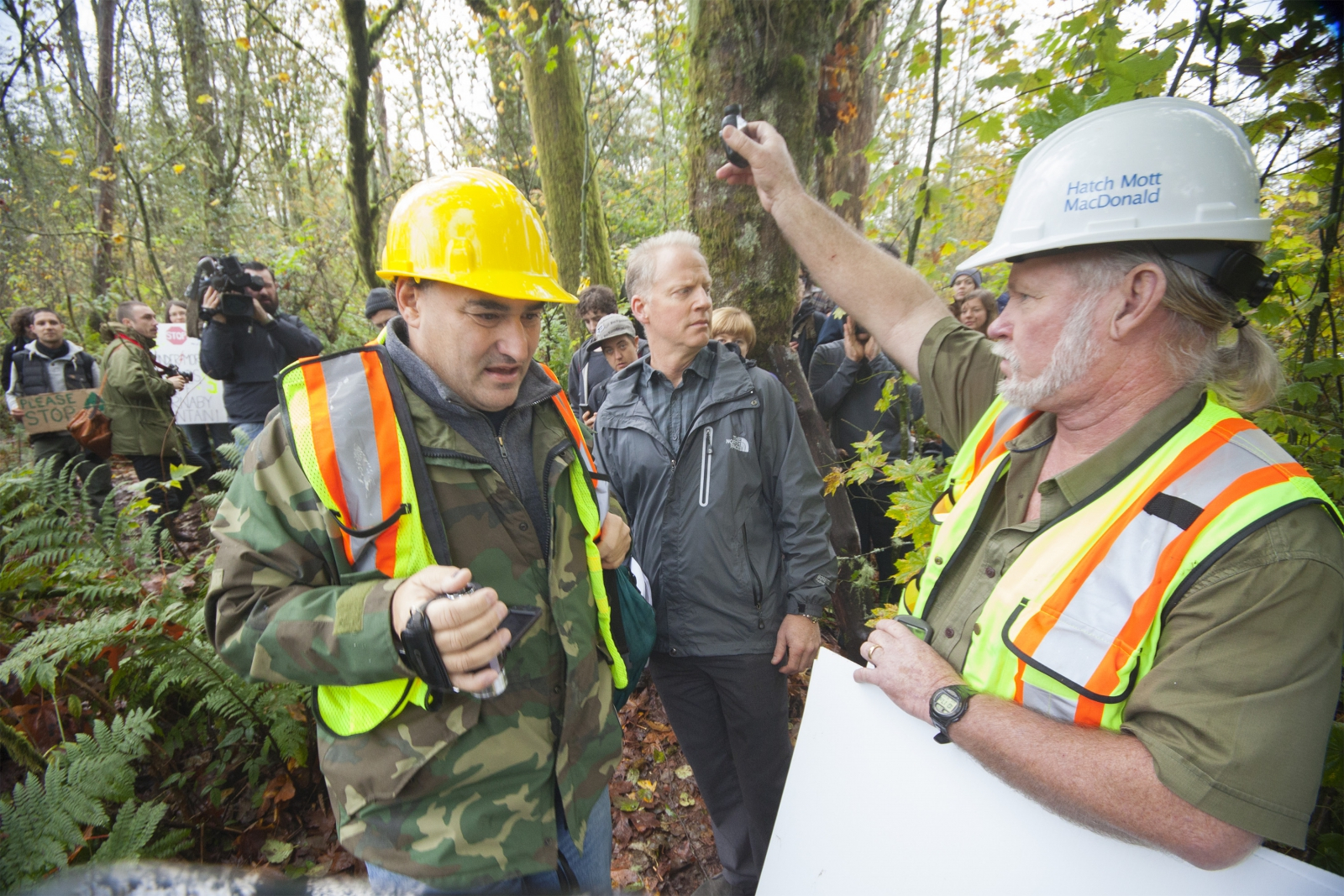 "What it shows is that people can be intimidated and deterred from actively being involved in protests," said Kinder Morgan lawsuit defendant Alan Dutton.

In a heartbreaking decision for a Burnaby retiree, a B.C. Supreme Court refused to throw out a Kinder Morgan lawsuit against Alan Dutton, on the basis it was a so-called SLAPP suit, designed merely to stifle pipeline opponents.

Justice Randall S.K. Wong said he was not convinced that a trial over the issue would have no chance of success, and so Dutton's request to summarily dismiss the case was denied.

Dutton was also seeking to have his legal bills covered. Now it's possible, he may have to pay Kinder Morgan's bills instead. A decision on that is pending.

"What it shows is that people can be intimidated and deterred from actively being involved in protests."

Alan Dutton was among five people sued by Kinder Morgan in late October, and described as “conspirators” by the company for allegedly organizing protesters to disrupt and intimidate the pipeline company’s drill crews.

The defendants believed they were facing millions of dollars in damages, as the company initially claimed.

Two of the five defendants – SFU professors Lynne Quarmby and Stephen Collis --- have settled “discontinuance” agreements to effectively end the lawsuits for now, without cost.

But this week, Dutton argued that Kinder Morgan was abusing the court process by hitting him with the lawsuit in the first place. He described the company's legal attack as a classic SLAPP suit (strategic lawsuit against public participation).

He also said there was not a "shred of evidence" that he was a ring leader, or actively counselled any of the more "radical" protesters who yelled bull horns in the faces of pipeline crews and obstructed the energy giant's survey work.

Dutton's "only crime" said his lawyer, was that he managed the website for the citizens' group BROKE, where he encouraged people to attend to Burnaby Mountain to express their opposition to the pipeline, but not to break the law.

Dutton's hope was, he could apply to have the court issue a summary decision to have the lawsuit thrown out as having no hope of success in trial.

But Justice Wong disagreed, saying for this type of summary ruling, it was not his job to evaluate the evidence in detail. He said he was persuaded that there was enough information to suggest a "civil conspiracy" had taken place, and a trial would determine the truth.

The justice also acknowledged the company's argument, that following the successful (and controversial) injunction that allowed Kinder Morgan's drillers to begin work, protesters were still allowed to protest -- a suggestion that their freedom of expression was not curtailed.

Dutton was clearly disappointed with the ruling. He believes the decision lets large corporations silence its critics with lawsuits. "I think it shows that the rules are a real problem for our democratic rights," said Dutton. "In my view, Kinder Morgan has acted as a bully."

One of the key events described in court this week, was an October 29th clash between company crews and some 30-40 protesters. Kinder Morgan said Dutton "participated" in that activity, while Dutton denies this.

The Vancouver Observer was there, and took photos, and Dutton did not appear in any of them. Kinder Morgan itself shot lots of photos of that same event, but did not produce any photos of Dutton at that location in court. Its lawyer said he was not sure if any existed, when asked in the court’s hallway.

Dutton said he did not attend to the forest scene until an hour after the crews had left, and could not possibly have interfered with the crews.

“He participated in that demonstration. He was the managing editor of that website, and told people to go. And that is the demonstration that blocked the work" and caused the public nuisance and intimidation, said William Kaplan, for the company.

Justice Wong himself suggested that Dutton may have only been a “satellite participant” to the main conspiracy scheme, to stop the work activity.

Two other defendants -- Adam Gold and Mia Nissen -- did not accept Kinder Morgan's offer to "discontinue" the lawsuits against them. Their lawyer said they want a deal that permanently ends the claim made against them.

Dutton said his fight was not over yet.

"I'm hoping there will be grounds for appeal," he said. "I will continue to fight. I'm not accepting the decision on this...and we'll certainly be arguing for anti-SLAPP legislation in British Columbia.

"There's a weakness in the rules of the court. It was obvious today. It's shown that people who are obviously innocent, have no involvement in violence whatsoever...despite that fact, they can still be held responsible for the damages they caused. In my case, that's 5.6 million dollars."

Following the public uproar over the lawsuit in November, Kinder Morgan Canada's president Ian Anderson told the media that the company did not have any intention of claiming millions of dollars in damages from the five defendants "if the work was allowed to proceed."

The eventual injunction that allowed the drillers to proceed triggered hundreds of people to attend to the mountain daily. During those ten tumultuous days, more than 100 people were arrested for crossing the police line protecting the drillers.

All of the charges were later thrown out over a technicality. The police-protected injunction zone did not match the GPS coordinates of the court order.

The National Energy Board will begin a public hearing into the Trans Mountain pipeline expansion project in September.