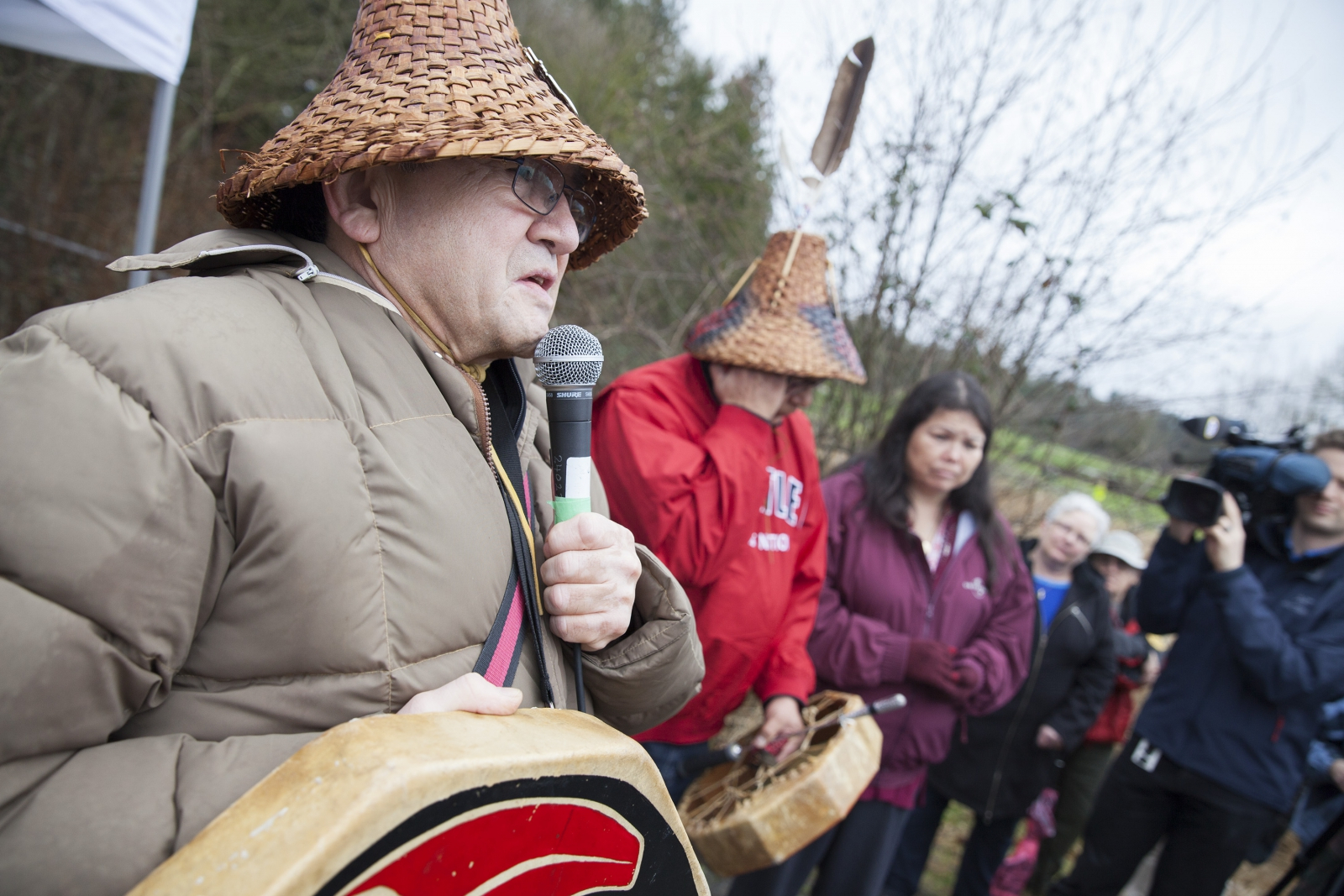 Members of Kwantlen First Nation in Langley were surprised to discover that Kinder Morgan had just wrapped up one week of Burnaby-Mountain-style borehole drilling on their traditional territory.

The southwest B.C. aboriginal community, an hour's drive from Vancouver, held a press conference to raise alarm about the drilling activity that appeared to come without notice.

“There was absolutely no communication whatsoever,” said band member Brandon Gabriel on Thursday.

The lack of communication about the drilling left many Kwantlen believing the Texas-based company is attempting to be secretive to avoid protests.

About 70 people, including the Kwantlen chief and band councillors, held the protest just metres from where the borehole drilling took place near the Belmont Golf Course.

"The sites are both on private property, not municipal lands," wrote a company spokesperson.

Gabriel told the crowd the band only found out about the drilling through social media and from a salmon conservation group that contacted them to let them know.

The Salmon River Enhancement Society, a non-profit water stewardship charity, noticed the Kinder Morgan drillers in recent days, and took photos. The company work crews appeared to have wrapped up on Monday.

Kinder Morgan said it received permission from the Township of Langley and the private landowners where the drilling took place. But a local resident said the people need to be informed too.

"The township did not make the citizens aware. That's a problem," said Shane Dyson, who attended the rally, and lives nearby.

"This will be going on in Abbotsford, Chilliwack, Hope, across the Fraser Valley where they'll be doing their drill testing."

"We need to have citizen oversight," he added.

The company declined to state where else it will conduct further borehole testing, but it is widely believed to be going on throughout the Lower Fraser Valley.

The company is seeking to understand the underground geology all along the 1,000-kilometre-plus pipeline route between Edmonton and Burnaby.

Kwantlen Elder Farley Antone said his people have long been opposed to the company's incursions into Kwantlen lands and waterways.

“A few years ago, when we were first introduced to Kinder Morgan...I had four words for them."

"Over my dead body," said the Elder, to cheers from the crowd.

Kwantlen members also expressed frustration that the National Energy Board's recent Aboriginal oral hearing in Chillwack did not allow for any critical questioning of the company's project.

Kinder Morgan's lawyer infamously asked the band at that hearing if the community still eats fish.

Below is Kinder Morgan's full response to a request for information about the drilling:

More About the Work in Langley Township: