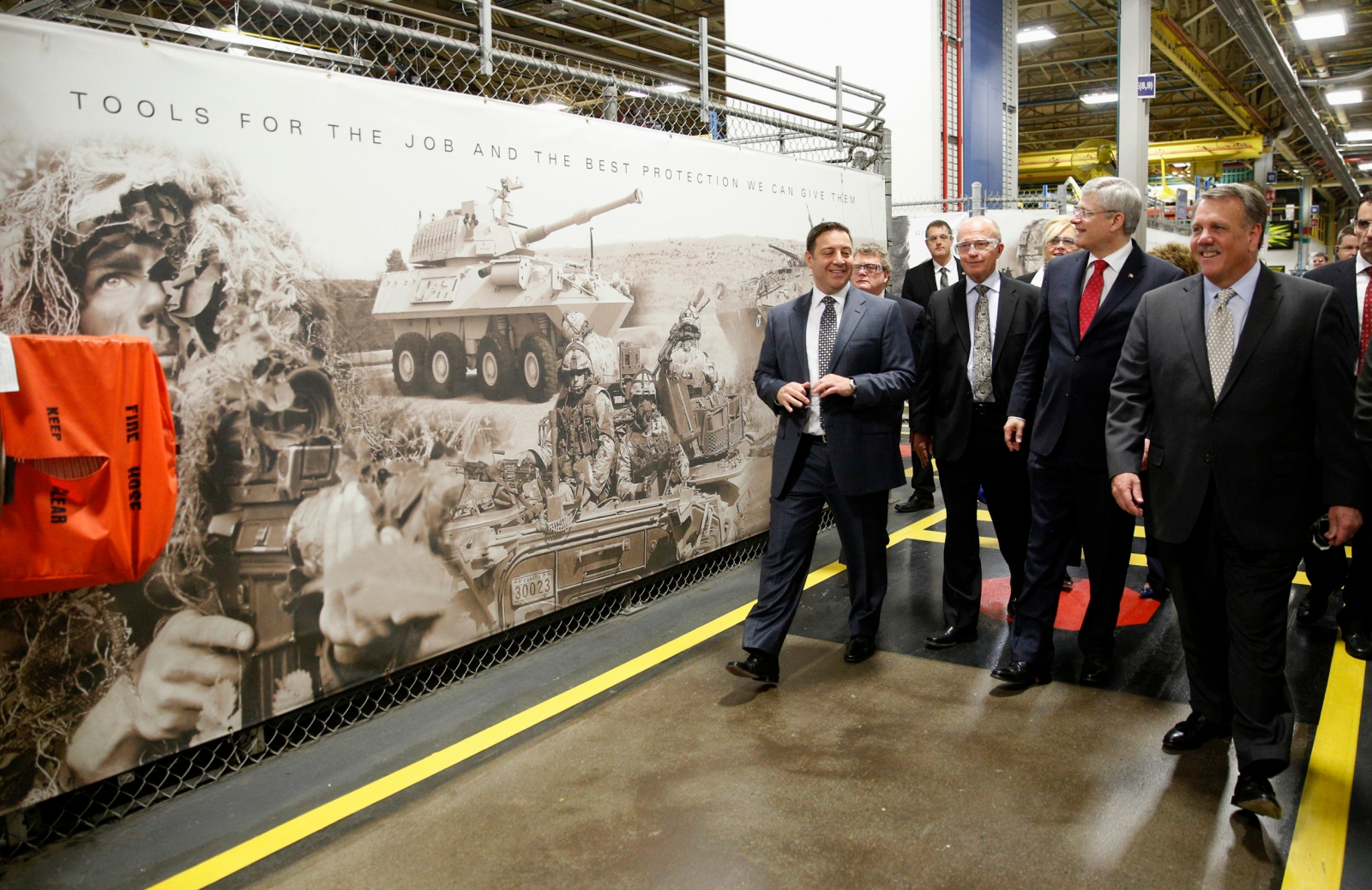 Despite a reputation for cool-headed diplomacy during perennial conflicts, the Harper government is doubling down on its weapons-manufacturing capabilities— and quickly expanding its comparatively tiny defence sector into what the tight Cabinet around the prime minister sees as a key driver of Canada's economic future.

In 2008, the Conservatives announced the Canada First Defence Strategy, or CFDS, a $490 billion military budget that should ideally last Canada until 2028. Ottawa put aside 42 per cent of that figure, some $206 billion, as an investment directly into Canada's defence and security industry. Improvements to military infrastructure, equipment, and "readiness" were offered up as tenders for the lowest commercial bidder who would promise the biggest economic impact.

Industry Canada and the Department of National Defence see the CFDS not only as vital funding for Canada's under-equipped military contingent, but as a way to jumpstart offspring economies via new technologies— as with past military-sourced innovations such as the Internet, GPS, and digital photography.

Daniel Le Bouthillier, head of media operations at the Department of National Defence, said that the CFDS is intended to keep the Canadian Forces “flexible, agile, and resilient” in a volatile and unpredictable world, where the military could be called upon at any moment for “humanitarian assistance, combat or peace support.”

Industry Canada argues that "the defence sector is highly innovative and produces advanced technologies with defence and civilian applications," and that, generally speaking, governments investing in "defence-related goods and services will generate economic benefits to their nations."

The report was commissioned in 2012 by a government that saw a "unique opportunity created by this exceptional investment [the CFDS] to support the competitiveness of Canadian industry."

The DPS promises to deliver to Canada's marine and land-based forces the necessary equipment and services in a "timely and cost effective manner," as well as "leveraging purchases to create jobs and maximize export opportunities"— and lastly, "streamlining defence procurement processes."

Media representatives with Industry Canada told the Vancouver Observer that the “Government of Canada introduced [the DPS] to leverage [military] purchases for economic growth,” as part of the Industrial and Technological Benefits plan.

The "ITB" plan calls for all defence companies bidding for a contract with the government to spell out what economic benefits there are for Canada, such as copyrights, or patents, or simply peripheral business generated by the presence of defence contractors in Canadian cities.

Ineptitude cited as reason for"burning through billions" by Harper government

In mid-January of this year, Dave Perry, Senior Defence and Security Analyst with the Conference of Defence Associations Institute, an organization that researches and reports on the social impact of the government's defence decisions, released an analysis of the Defence Procurement Strategy.

Perry concluded that by staying on the same path as the preceding Liberal governments in terms of procurement management, and adding even more projects while Canada was involved in the Afghanistan war, the Harper government was burning through billions of tax dollars, for no good reason other than managerial ineptitude.

Perry pointed to implementation delays and under-staffing of projects, as well as faulty budget assessments as reasons why Canadians should not be surprised when actual procurement costs are drastically misreported; most publicly so with the F-35 jet fighters.

And by 2009, when major ship building contracts were on deck and the F-35 fighter jet was under full development, the group had 4,355 employees, with a 23 per cent vacancy rate. "It is simply unreasonable to expect that fewer people can cope with a significant expansion in workload,” Perry writes.

Therefore, the initial budget of $490 billion set aside for the Canada First Defence Strategy is very likely to be a low ballpark figure and will be a costly affair in the future, according to Perry's analysis.

“The CFDS financial commitment, relative to its desired capability,” Perry said, “has been judged insufficient since its release. In particular, the adequacy of a two percent defence escalator is a major point of contention, as some former officials argue that the force structure outlined in CFDS required an annual budget escalation of four percent. By this measure, CFDS was underfunded from the moment of its release.”

Sven Tommi Rebien, former analyst with the Swedish Defence Research Agency, highlighted further pitfalls of the Conservative government's Defence Procurement Strategy in his commentary for the Canadian Defence and Foreign Affairs Institute, noting a similar approach to procurement by the United Kingdom in the late 1990s and early 2000s.

He said that success of such a procurement strategy, which purportedly benefits “all involved,” demands a constant flow of purchase orders.

"It's a factor that has proven to be particularly difficult given budgetary constraints in the face of economic downturns, rising equipment and in-service costs, as well as quickly changing defence and security requirements,” he said.

Secondly, Rebien argues that poly-institutional oversight of military projects will stymie efficient decision making, in which a number of government institutions will have to “coordinate, cross-monitor, co-evaluate and at times, co-decide."

A clear example of this, which Rebien points out, is the Defence Analytics Institute, an “independent, third party" that will identify the so-called Key Industrial Capabilities – the sectors of the military that would best benefit the economy.

Together with the Defence Procurement Secretariat, the executive body on all procurement matters, and the Working Group of Minsters, an efficacy body, the Defence Analytics Institute will study and decide where the military budget should be ideally funneled, so as to incur the best return on investment.

The Defence Analytics Institute and its partners are not the only group that gets to call the shots on what projects will get the green light, but also the Permanent Work Group of Ministers and the Deputy Minister Governance Committee.

Because these often vie for contradictory goals and methods, Rebien said he expects major procurement projects to be bogged down by very costly bureaucracy.

The Defence Analytics Institute is in part headed by Christyn Cianfarani, president of Canada's foremost defence lobby group, the Canadian Association of Defence and Security Industries (CADSI), and who co-wrote the Defense Procurement Strategy report with Tom Jenkins.

The CADSI's director of communications Brian Berube said that CADSI “works quite closely with Public Works and Government Services, with Industry Canada, and National Defence to understand policies that govern procurement in this country.”

“In other words, how does the government go about buying its kit [and] what are the rules surrounding that,” he explains CADSI's role in short, adding that the “association, and our president, interact quite regularly with government to better understand procurement policies.” He said that CADSI is “very” close to the government as evidenced by the appointment of Cianfarani to be one of the heads of the Defence Analytics Institute.

“There is a strong belief with[in] our association and the government that this new Defence Procurement Strategy is the best for everyone involved because it does get the right kit to the Forces, at the best price and it also encourages the Canadian economy, and creates Canadian jobs, and creates value for Canada. And that's the objective of this whole process," he said.

Retired Lieutenant-General of the Canadian forces and Liberal hopeful for 2015 in Orleans, Quebec, Andrew Leslie, told the Vancouver Observer that the Conservatives' Canada First Defence Strategy is now a dated document. It was drawn up before the height of the Afghan war, in which “there were a bunch of promises that the Conservative government has made which have not been met. Such as stable and predictable funding, the size of active duty and reserve forces, specific numbers of major equipment acquisitions and weapons systems, and timelines for delivery.”

Leslie admited that the Harper government's response in the first years of its mandate was “quite good,” and that some of the needed equipment, such as lift aircraft for heavy equipment transport, was expedited quickly, but since 2010, “this government's record on defence procurement has been the worst since records have been kept.”

"The billions of dollars that [the Conservatives] are allocating in preferential tax treatment to mainly the wealthy, have been borne on the backs of the soldiers, both serving, in terms of defence procurement, and retired, in terms of lack in adequate support for our veterans,“ he said adding that, “veterans have been underspent on since the Conservatives came into power by $1.1 billion. That's a fact that's on parliamentary records.”

In what some said was an attempt to preemptively mitigate a public relations disaster, the Harper government committed an additional $200 million to Veteran Affairs Canada late last November, just days before a report by Auditor General Michael Ferguson highlighted abysmal inefficiencies in mental health care delivery to ex-soldiers. The government will pay out a tenth of the funds over the next six years, while the rest will be payable over the course of up to 50 years.

Leslie concludes that the promise of the defence industry as an encompassing, beneficial part of the economy "is an empty statement until they start producing jobs to build the equipment. So far, there has been no increase in the number of workers in the defence industry in the last four to five years, at least, not in Canada.”