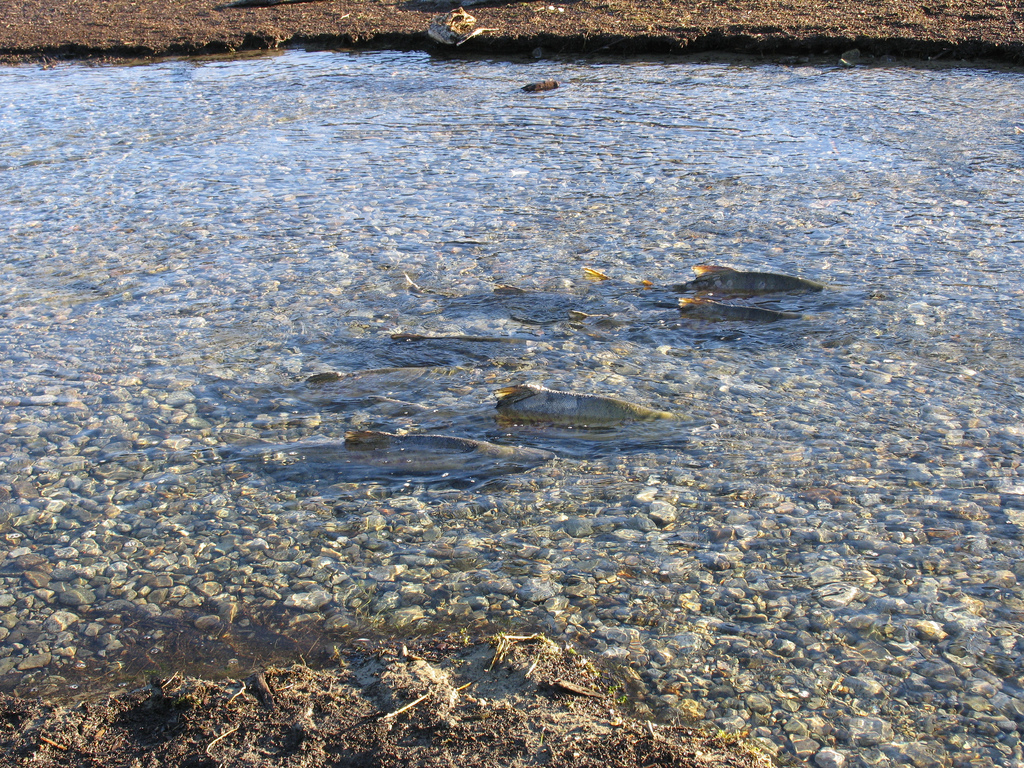 It’s an innocuous bridge, not pretty to look at, but vital: the Vedder Bridge connects the cities of Abbotsford and Chilliwack over the Vedder Canal, which flows into the Fraser River. If a new recycling plant proposed by Ontario-based company Aevitas is approved by the province, the bridge will see a steady stream of truck-traffic carrying harmful pollutants.

West of the bridge and at the base of Sumas Mountain lies the Sema:th band village. Every year from spring to fall, the Sema:th cast nets out onto the nearby Fraser River, says Ernie Crey, fisheries adviser to the Sto:lo Nation.

A threat to Fraser River fish

The Fraser and its tributaries are famous for hosting some of the richest salmon runs on the planet.

Besides providing a critical food source for First Nations along the river, salmon, as well as steelhead trout and sturgeon, draw sports fisherman from all over the world to Chilliwack’s tourism industry, pumping revenue into the city’s hotels and restaurants.

Both the First Nations and sport fisheries are threatened, says Crey, by the possibility of a hazardous waste recycling facility next to the river.

The prospect of such a facility on the floodplain of the largest river system in B.C. has set off red flags for a coalition of groups that includes First Nations, conservationists and sport-fishing enthusiasts. They are alarmed by the possibility of persistent toxic pollutants seeping into the Fraser in the event of a flood, as well as by the reality of semi-trailers trucking large quantities of hazardous materials over the Vedder Bridge.

No one disputes the need for a recycling facility that diverts products, like mercury-containing CFL bulbs and transformer oil laden with PCB’s, away from the landfill to be safely decommissioned and re-purposed.

But the risk of “catastrophe”, as Crey puts it, is simply too high.

Currently, the application from Aevitas Inc. is in front of the Ministry of the Environment, where a decision will be made about whether an environmental assessment is required for the project, and whether it will indeed go ahead.

According to the application, the Aevitas facility will handle 5,000 liters of transformer oil and 500,000 CFL bulbs each month, amongst a variety of other materials – not a large facility, by the province’s standards, but not a small one either. Much of the waste will come from the Lower Mainland.

The Ontario-based company states that it has a flawless record, and that in 20 years of operation they have never been responsible for a toxic spill. Numerous safeguards are proposed for the facility, including geo membranes and a clay liner that will make the structure “impervious,” says Byron Day, president of Aevitas.

The structure will be elevated above what the city calls the “catastrophic flood level” and a thorough evacuation plan for moving hazardous materials off site will be in place, should water levels reach a certain point.

Although the City of Chilliwack says there is no guarantee that the dikes between the Fraser and the proposed facility won’t break, the proposed safeguards were enough to convince city council to rezone the land in early 2014 to allow for the plant to be built.

But the safety measures are not enough to convince those who are alarmed by the idea of hazardous waste being housed within the floodplain of the lower Fraser, and opposition to the project appears to be growing. More than 20 groups representing 120,000 people have voiced their concern over the proposed location of the plant, noting the hazards of floods, earthquakes, or fires— or even trucks carrying hazardous waste to the plant going through a guardrail on the Vedder Bridge.

A 2012 study by Dr. Déry and his colleagues analyzed 100 years of hydrological data collected from 139 Environment Canada gauges throughout the Fraser River basin. What they found was alarming. While the average annual water levels of the Fraser remain consistent, the seasonal high and low water levels are getting consistently more extreme due in large part to a warming climate and more frequent weather events like El Niño.

“Obviously what they cannot rely on is the previous high extreme flows because in the future they might actually be surpassed,” Dr. Déry says speaking of the province’s flood forecasting methods. “That’s what we have to be careful about. The past may not be an indicator of potential future floods.”

When asked about the proposed facility, he answers without hesitation. “I would not encourage any construction along the floodplain of the Fraser River. We don’t know what may happen in the future.”

While much has been said about the benefits of the proposed facility and the safeguards that will be in place, a couple crucial pieces of the puzzle are missing: what are the specific risks of the project? And what happens if something goes wrong?

For Dr. John Janmaat, an Associate Professor of Economics at the University of British Columbia who focuses on environmental resource economics, these are the key questions.

“If the province isn’t willing to go through a full formal environmental assessment – and my sense is that they’re not committed to doing that – then it’s not clear that anybody is really going to assess the risks,” said Dr. Janmaat.

Dr. Janmaat believes the provincial authorities will decide against an environmental assessment because the facility is relatively small and the assessment process is expensive. And yet, the bond amount that the province requires from the company for potential clean-up and remediation cannot be determined without an adequate assessment of what can actually go wrong.

Although the economic benefits to the city of Chilliwack are clear – a new facility would bring in jobs and taxes – Dr. Janmaat personally understands why the project has prompted such a strong backlash from the community.

“I grew up in Chilliwack and I have some appreciation for how beautiful a place it is, and how critical things like the fishery and the health of the river are, so I can see why some people are very, very concerned.”

“I share their concern and I figure that just a little more information would help to ensure that we’re making the best choice.”