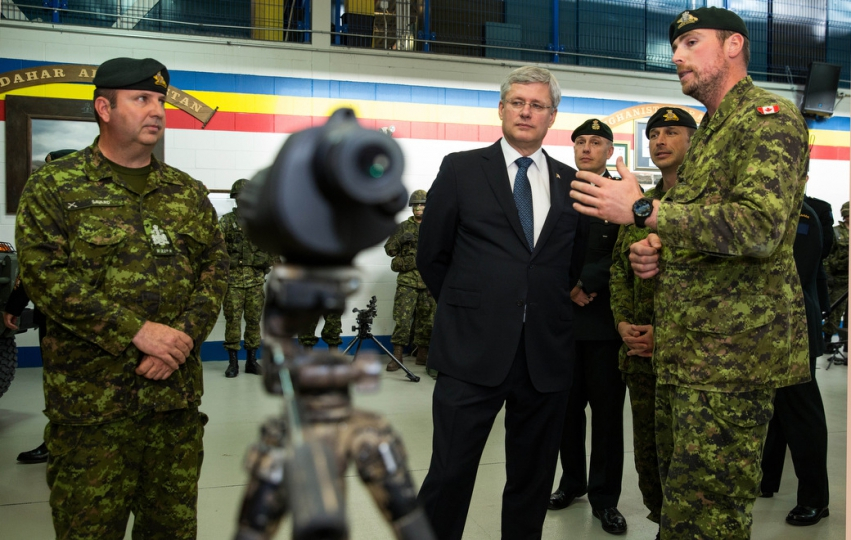 In my opinion, Bill C-51 is not a response to terror. This bill is "fear itself." Across Canada on March 14, Canadians will come out to show courage and strength and protest Bill C-51.

Growing up, I used to fall asleep to the sound of my mom and her church friends singing around the piano at the end of their Bible study meetings. One of the songs I remember most clearly coming from down the hall as I dozed off is Be Not Afraid. It is a soothing and beautiful song. Dozens of times throughout the Bible, we are encouraged, if not commanded, to be courageous.

I’ve been thinking a lot about fear lately. It’s hard not to with all the terror and fear that our government and media is so fixated upon as this election year unfolds. The Conservative Party is even putting out images of masked men with quotes about bombing West Edmonton Mall. Edmontonians, including one conservative MLA, and one Conservative Member of Parliament, have been troubled by this hyperbolic sensationalism. They say they feel that it crosses a line.

Like many others in Canada, I'm troubled about another line the Conservative Party of Canada has helped us all cross, the threshold of 350 parts per million of carbon emissions in our planet's atmosphere.

Growing up I used to enjoy wandering in the hills of West Kelowna behind my elementary school. I loved the smell of the pine needles, sap, wild flowers and tall grasses, the breeze swaying and bristling the trunks and branches above me.

Now, when I go home to visit I’m greeted by dead forest as the mountain pine beetle marches north with every warming year.

This is a terror that is tangible.

The terror of seeing the beautiful world I grew up in descending into ruin and a government that appears to be doing everything it can to ignore and deny this, if not accelerate it, as it dismisses environmental concern. Even seeks to criminalize it.

We are not the political fringe. We are a large group that spans party lines and our concerns are backed not only by scientific inquiry, but by the legitimacy of the experiences and local knowledge of those whose lives and lands are threatened by increased fracking, pipelines and coal trains —ostensibly the "critical infrastructure" that exists for "economic stability" and the "national interest" as laid out in Bill C-51.

As someone who cares about the environment I’ve had a range of fears for years now, and they seem to grow with every year the Harper government is in power.

Further to the pine beetle destroying our Canadian forests, I've been concerned with mega droughts in the United States at a time when our province is giving our water away to multinational corporations, and Ottawa removing protection of it altogether.

I fear what rising inequality and stagnant wages are doing to Canadian society. I fear government inaction on important issues affecting Canadians, like 2,000 missing and murdered Canadian aboriginal women, while it holds secret meetings with multinational oil and gas companies.

My latest fear is that the RCMP is labeling my friends, professional colleagues and I as radicals and a growing security threat to Canada because of our concerns over the impacts of resource extraction and distribution in our communities, and on Canadian water, soil and air.

I’m concerned for my First Nations friends in particular, who seem particularly at risk of being targeted for defending their ancestral lands against forms of industrial development that threaten their livelihoods.

Bill C-51 and the recently leaked RCMP documents show this country's government to be taking us in a deeply concerning direction, not dissimilar to that of Peru with its "license to kill environmental protestors" law. The RCMP recently called us a radical "anti-petroleum movement," but I don’t see it that way. We're much more than that.

We are a clean air and drinkable water movement.

We are a clean technology and sustainable business movement.

We are a pro-democracy movement.

We are concerned Canadians. Very concerned. And we deserve better than to be spied on, threatened and marginalized by our own government.

There is much to be concerned about, including religious extremism of varying types, but right now it seems nobody is trying to make Canadians afraid more than the Harper government itself, in order to sell this bill as the solution, and itself as the government who will protect us from the monsters lurking in the shadows.

But it will not protect us from climate change, or poisoned water, or species extinction.

To hold on to power, it would trample the very constitution it is beholden to abide by in defense of our free society, while ignoring and dismissing these and many other social and environmental challenges entirely.

What we are seeing unfolding before us is an attempt to leverage fear in the Canadian populace in order to pass legislation that legal scholars from the across the country have raised grave concerns about. Others have opined that this is setting the tone for this coming election, a campaign that plays off of fear and anxiety. With such irresponsible legislation the Harper government is putting party above nation and politics above the public.

“We have nothing to fear but fear its self," Franklin D Roosevelt once famously said. His words ring true any day, but more so today, as opportunistic politicians sew the seeds of paranoia and fear in the mind of the Canadian public.

Bill C-51 is not a response to terror. This bill is "fear itself" and in my opinion demonstrates how the Harper Government underestimates both the Canadian public's courage and our intelligence.

More than this, the bill is an assault on Canadians, our rights, our privacy and our values, and Parliament should kill it.

Join your fellow Vancouverites March 14th at the Vancouver Art Gallery and others protesting Bill C-51 Canada wide. Stand up with the growing coalition of non-partisan Canadians to say no to Harper's fear mongering.