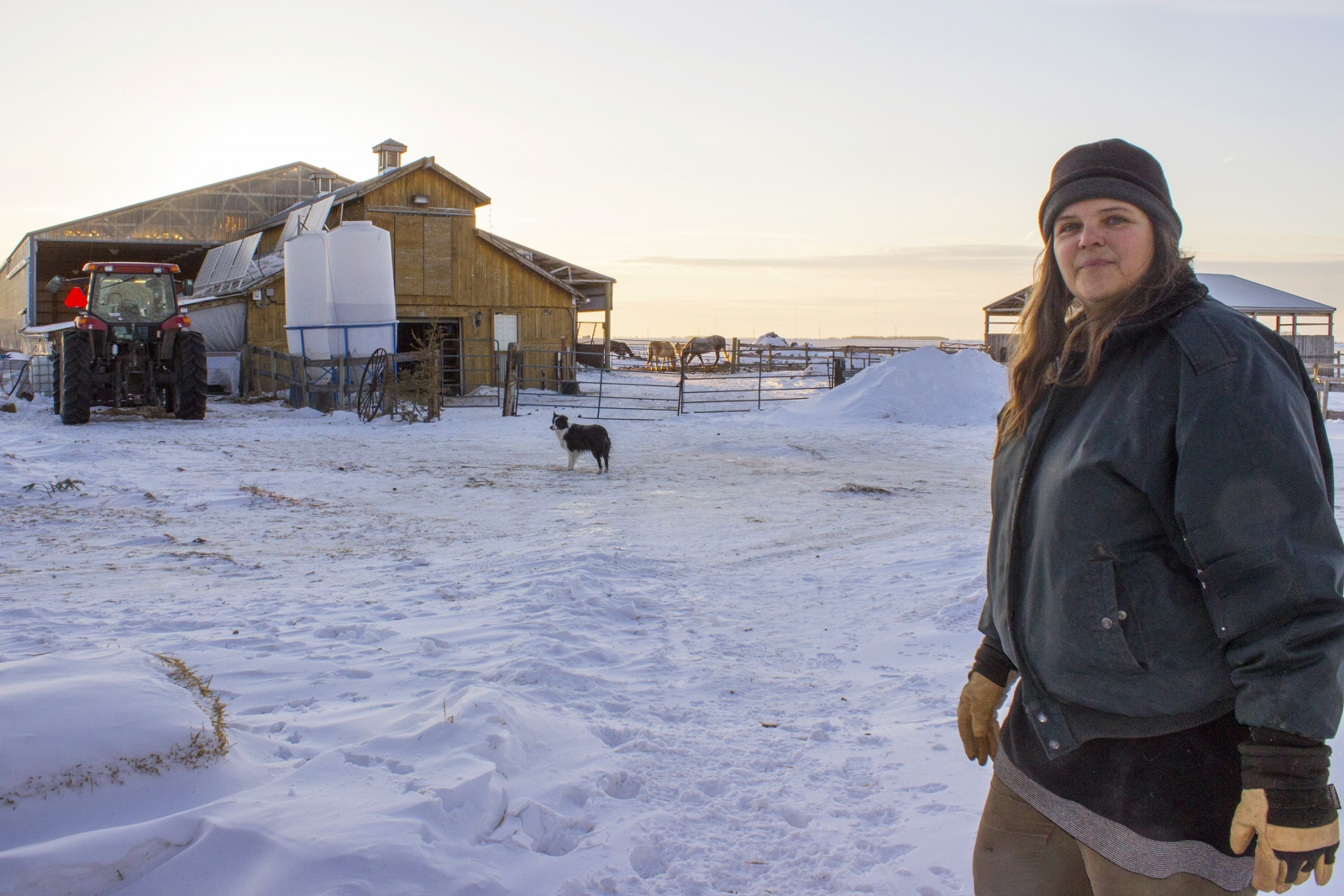 “The NEB intervener status process in my opinion is completely anti-democratic," says Manitoba organic farmer and pipeline opponent Louise May.

Preserving the earth trumps all to prairie organic farmer Louise May, who raises goats, chickens and horses — snow or shine —starting from the crack of dawn when her roosters crow.

So the prospect of a giant pipeline pumping 1.1 million barrels of oil less than one kilometre past her southern Manitoba farm is alarming, she says. The pipeline also runs beside Winnipeg’s methane-rich landfill, within eyeshot of her home.

Sipping a goat milk latte in her kitchen, surrounded by homemade beeswax candles, she noted the possibility of an explosion: “It’s potentially catastrophic."

“How would I quickly move my livestock? How could my business survive it? How about my peace of mind at the end of each day?”

While rare, pipeline explosions do happen— and May has been too close to two of them for her own comfort.

A TransCanada-owned natural gas pipeline exploded in 1996, destroying the house across the road from May’s. Another of the company's pipelines also exploded in January 2014 in southeast Manitoba, just a 45-minute drive from her farm. The fiery plumes, seen from kilometres away, lit the night sky a bright orange.

Energy East's oil pipeline would be a conversion of its natural gas pipeline system, allowing it to carry Alberta crude to eastern Canadian terminals.

But while May’s farm lies within a kilometre of the pipeline corridor, it may not be close enough for her to be of interest to the National Energy Board (NEB).

She believes that unless the pipeline actually travels directly below a landowner's property, a farmer like her doesn't have much clout.

“It would be easier for me to fight this if my property was directly overtop the pipeline,” said May. “But because I’m not even a kilometre away, I feel that there will be discrimination against my voice.”

But landowners can be pipeline spoilers too.

In the U.S, TransCanada’s other giant proposed pipeline — Keystone XL — has been blocked primarily by two forces: Obama and farmers in Nebraska.

The small farming state suddenly became the front lines against the project, as residents cited both climate change and land-rights concerns. Many American farmers didn’t like the idea of being overrun by a Canadian pipeline company.

The opposition even drew the attention of Manitoba's former Premier Gary Doer, now the Canadian Ambassador to the U.S.

“If the president says no to the pipeline, he’s saying yes to more oil on rail,” said Doer, in Washington D.C. press conference in January. “It isn’t that complicated."

But opponents rallied behind Winnipeg rock legend Neil Young, who put on an open-field concert in Nebraska to stir up opposition to TransCanada. The protests, which included a march on Washington, drew other celebrities, including singer Willie Nelson, actress Darryl Hannah, environmentalist Robert Kennedy, and climate-activist-billionaire Tom Steyer.

But Canada is a different story than the U.S, says Jim Ness, a representative from the Canadian Association of Energy Pipeline Landowners Associations (CAEPLA).

“It comes down to this: U.S. landowners, historically, are used to standing alone,” said Ness, who is a grain farmer in eastern Alberta.

“In Canada, I like to think we still have the pioneering spirit, to depend on our neighbours for survival. Americans tend to be more individualistic. They are not as open to working as a group. So you need hundreds of [individuals] hiring hundreds of lawyers, instead of working together.”

Many landowners want to deal

Ness said the general consensus within his pipeline-landowner association is to negotiate a commercial deal with TransCanada. Protests, like those by Nebraska landowners, are not in the works.

“Oh, heavens no, we’re not into fighting,” said Ness. “We are not anti-pipeline.”

That frustrates May, who said she will organize activism and civil disobedience against Energy East. She's given speeches at town halls about the pipeline at the University of Winnipeg and in St. Norbert.

"I’m absolutely anti-pipeline and I would not join a landowners association that was promoting it," said May. “We will work to resist this.”

May is among 90 Manitobans that have applied to the NEB to be intervenors at a hearing that will recommend whether Energy East goes forward. The intervenors include the Manitoba Metis Federation, Dakota Tipi and Sagkeeng First Nations, the Green Party of Manitoba, the Manitoba Energy Justice Coalition, and the Wilderness Committee.

“We don’t get to make decisions on what Alberta does with the tar sands and the devastation they execute, because it’s provincial jurisdiction,” said Reder, with the Wilderness Committee in Winnipeg.

“Our first opportunity to raise objections was the Trans Mountain and the Northern Gateway pipelines and now, we’ll have Energy East,” he said.

“There are opponents of this project that try to paint a picture of pipelines splitting open in a farmer’s field or under a waterway or something,” said Duboyce. “It doesn’t happen.”

Duboyce defended TransCanada’s track record, saying the existing portion of Keystone pipeline — also a converted natural gas pipeline— has moved over 700 million barrels of oil since 2010 and has had “only 14 leaks.”

“All happened on our property in above ground facilities, primarily pump stations. None escaped into the environment and there was no damage to anyone’s property but our own. It was captured in capturing basins in small quantities,” said Duboyce.

Due to an NEB website malfunction, the time frame to apply for intervenor status at public hearings about Energy East has been extended from March 10 to 17. But May is not optimistic about the NEB’s pipeline review.

“The intervener status process in my opinion is completely anti-democratic and is used to control and shut out most of the public,” she said.

Under sweeping changes brought in by the Harper government, pipeline hearing applicants can be thrown out, and often are if deemed indirectly affected by the pipeline. Those who primarily wish to raise concerns about climate change or the expansion of the oil sands are also not permitted.

With files from Mychaylo Prystupa.