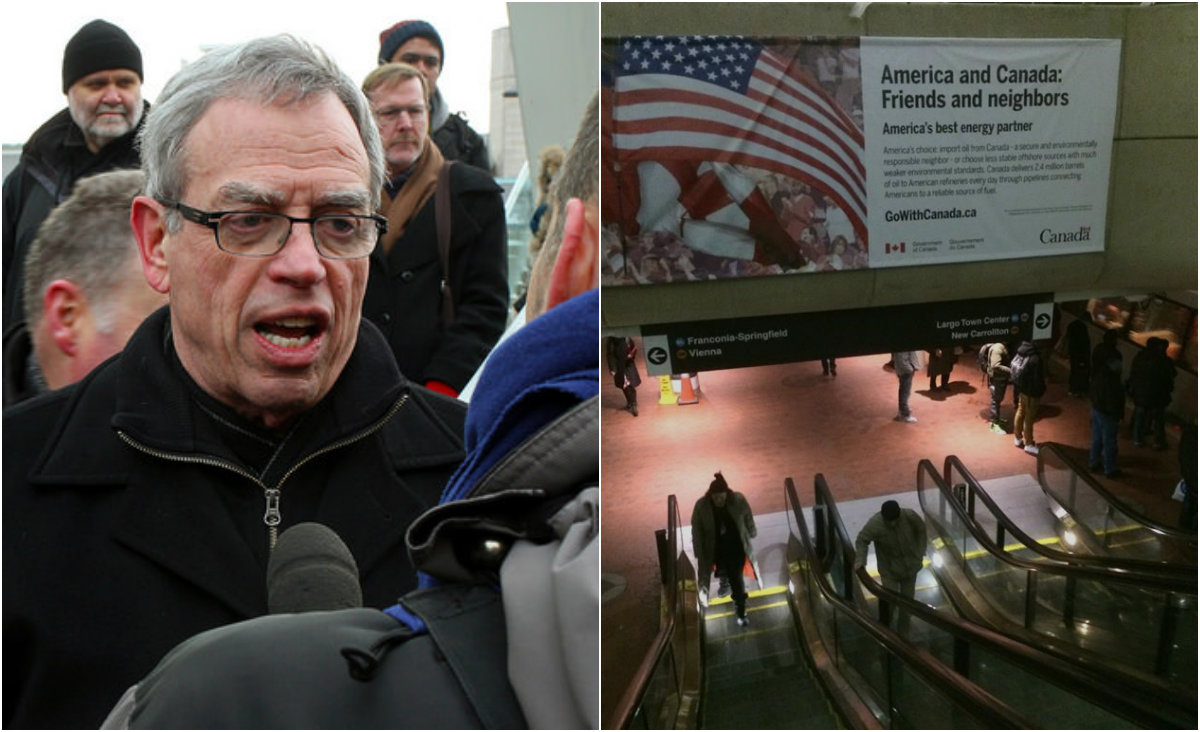 WASHINGTON — The multimillion−dollar campaign to market Canadian oil in the U.S. was hard to miss.

The Maple Leaf was plastered on the walls of subway stops in Washington, D.C., and it popped up in all sorts of American publications with messages like, "America’s Best Energy Partner," and "Friends and Neighbors."

Documents obtained by The Canadian Press offer a peek at the behind−the−scenes strategic considerations in 2013, as the federal government conducted a $1.6−million U.S. ad campaign that grew into a $24−million, two−year program that wraps up this month.

The records, released under the Access to Information Act, reveal the websites to be shunned as advertising outlets; the Internet search words that would trigger a Canadian energy ad; the coveted locations for billboards in Washington, D.C.; the rejected proposals; and the U.S. ad salespeople who angled for a slice of the publicity pie.

Throughout the two−year campaign, the Keystone pipeline issue remained unresolved. But that doesn’t mean it failed, defenders say. In fact, the ads didn’t mention Keystone. The original call for tenders spelled out the mission: to defend Canadian energy’s reputation against hostile groups and lawmakers threatening anti−oilsands measures in the U.S. and Europe.

One proposed weapon for fighting back: pop−up ads.

Someone whose name was blacked out proposed using so−called takeover or roadblock ads that would monopolize people’s computer screens: "If we’re going to do this right, we might as well go big."

But a marketing manager at Natural Resources Canada suggested a more delicate balance. "We’ve attempted to maximize our non−standard presence — without being offensive," he replied.

The subway posters were designed to grab the right people’s attention, but there was some initial disappointment on that score. Space was snapped up at two downtown D.C. metro stations, but the most coveted spots close to Capitol Hill were unavailable.

There were many conversations about websites.

LinkedIn was used, then dropped because of a disappointing click−count. Buzzfeed was interesting but the marketing manager at Natural Resources didn’t want federal ads appearing underneath glib headlines with acronyms like LOL, OMG and WTF: "I’m a bit weary of their content," he wrote.

He warned against using Facebook: "I think it’s dangerous." Aggressively partisan news sites were dropped, with Drudge Report and MSNBC turfed in favour of the more centrist National Journal.

Google was embraced. The campaign identified more than 250 terms that, when plugged into the ubiquitous search engine, would elicit a Canadian energy ad.

One famous term was apparently rejected. "I do not suspect Google will approve Obama as a (keyword)," said an ad−buyer from M5, one of the agencies working on the project. "Just giving you a heads up."

For print ads, there were clear conditions. Spots were not to appear next to any anti−Keystone editorials or ads. Space was purchased in the Economist, New York Times, Wall Street Journal and Forbes editions on three continents and in publications in Beijing, Shanghai, London and Brussels.

U.S. ad−sellers took notice. They began calling with various pitches, and the correspondence shows that Canadian officials discussed ways to politely turn them down.

One unsuccessful pitch involved an ambitious project with an eight−page advertising spread in the New Yorker and a Washington event featuring policy−makers. When warned of the catch, the steep price tag, a Canadian diplomat responded: "That’s quite an expensive catch."

Another idea considered, and rejected, was to turn Washington city buses into wraparound ads.

There were funds for advocacy — available to cover travel and hotel costs for people who might have some influence in a public discussion about Canadian resources.

There was opposition research. The embassy kept tabs on the work of environmentalists such as billionaire Tom Steyer and on the number of YouTube clicks for an anti−Keystone video featuring Robert Redford.

An internal memo to Washington embassy staff told them to stick to talking points if they were asked about the ads during a diplomatic reception.

Among the official lines: natural resources support 1.8 million Canadian jobs, they account for almost one−fifth of the country’s economic activity, and the ads were a timely and appropriate endorsement of the sector.

So was the campaign successful?

The poll showed most D.C. respondents had seen the ads. They didn’t quite agree, however, on what they’d seen. The most popular takeaway message, at 17 per cent, was that Canada and the U.S. were friends and energy partners. Building Keystone XL got 11 per cent.

One federal official says the ads were never designed to sway people about Keystone. They were there to spread a broader message people could remember and repeat, about an energy partnership with Canada.

"The ads were there to help create the political space for a (Keystone) approval."