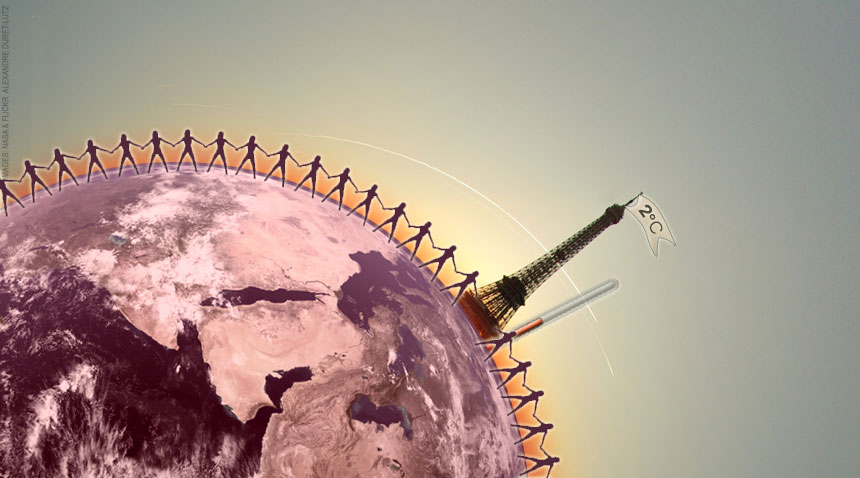 The last several years have seen a tremendous surge in the worldwide commitment preserve a safe climate future.

As one of the world's most effective climate leaders, author Bill McKibben, recently summarized in the UK Guardian:

"Pressure is growing. A relentless climate movement is starting to win big, unprecedented victories around the world, victories which are quickly reshaping the consensus view…"

Here are just a few examples of this burgeoning new climate movement.

The pope recently said "the time to find global solutions is running out."1 He plans to issue an encyclical calling on all 1.2 billion Catholics to act on climate change. He also will try to bring the world's religions together before the Paris climate summit to spur global action.

Catholic Bishops from every continent called last year for "an end to the fossil fuel era," insisting global temperature rise be limited to just 1.5oC.2

The Church of England declared climate disruption "a giant evil; a great demon of our day … [that] wreaks havoc though the immense power of the weather systems."3

All of that happened in 2014. As Argentinean Bishop Sorondo said: "The problem of climate change has become a major social and moral problem, and mentalities can only be changed on moral and religious grounds."4

The emergence of the climate crisis as a moral issue has continued in the early months of 2015.

Royal Dutch Shell CEO Ben van Beurden linked climate change and morality in a speech: "The issue is how to balance one moral obligation, energy access for all, against the other: fighting climate change."

In March, US Secretary of State, John Kerry, argued the moral imperative of the climate fight saying: "if we fail, future generations will not and should not forgive those who ignore this moment, no matter their reasoning … Future generations will judge our effort not just a policy failure, but a collective moral failure of historic consequence.” [Italics mine.]

A few weeks later, the head of the US Episcopal church told the Guardian, "I really hope to motivate average Episcopalians to see the severity of this issue, the morality of this issue,” and chastised climate deniers for being "blind" to the science. "One of the significant changes in particular has been the growing awareness and activism among the evangelical community."

Apparently the sense that climate change has become a moral issue is now widespread. A Reuter's poll released in late February found that 72 per cent of Americans now feel "personally morally obligated” to reduce emissions.

In the years leading up to Copenhagen2009, anti-poverty and human rights groups were mostly on the sidelines. In a famous example, a 2006 study showed that random terms like "ice cream" and "donkey" were far more common than "climate change" on major human rights groups' websites.5

Contrast that to today where a new human rights alliance —Action/2015 — has formed that unites thousands of activist groups from 120 nations. Their shared goal: "A movement to end poverty, inequality and dangerous climate change." 6

U.N. Secretary-General Ban Ki-moon warned climate change is "an existential challenge for the whole human race — our way of life, our plans for the future."7 "Tackling climate change and fostering sustainable development agendas are two mutually reinforcing sides of the same coin." 8

In recent years the United States military has started warning us that climate change is a "threat multiplier" and a "catalyst for conflict" that is "having an impact on national security… We are actively integrating climate considerations across the full spectrum of our activities."9

The brutal and destabilizing recent civil war in Syria is a fitting example. According to a recent study in the Proceedings of the National Academy of Sciences , climate change helped set off a chain of crop failures and other drought impacts that drove 1.5 million Syrians from their homes, providing much of the kindling for a civil war to engulf the nation and region.

US Secretary of State John Kerry called climate change a "clear and present danger"10 and warned that "unless we act dramatically and quickly, science tells us our climate and our way of life are literally in jeopardy."11

US President Barack Obama in his 2015 State of the Union 12 address said bluntly: "No challenge poses a greater threat to future generations than climate change… The Pentagon says that climate change poses immediate risks to our national security. We should act like it."

The US National Institute of Health sums up the emerging global consensus: "The major public health organizations of the world have said that climate change is a critical public health problem."13

The British Medical Journal is blunt: "No doubt about the scale and immediacy of the threat to human survival, health, and wellbeing… This is an emergency."14

The newly-fledged campaign to convince investors to divest from the fossil fuel sector is just a couple years old but is already the fastest growing divestment campaign in history, according to the University of Oxford.15 As with other divestment campaigns the goal is to revoke social license for unethical actions.

And in the last few years many of the world's major global financial and energy groups have started speaking out and taking action on the climate threat. Here are just a few recent examples:

On the urgency of the climate threat

On the costs of delayed climate action:

On ending funding for coal:

The evolution from rubber stamp projects to multi-year battles has emerged in just the last few years. Now even the US President considers climate pollution a critical issue for oil pipelines.

The Assembly of First Nations says: "The changing climate is at the very core of First Nations’ concerns."40 First Nations are emerging as leaders in many battles to reign in fossil carbon expansion projects in Canada and the United States.

Up next: the road to Paris for Canada and its two largest trading partners, USA and EU.

The emergence of such a broad and worldwide climate movement is helping drive increasing ambition in America, Europe and other major economies. My next article in this series will compare the current level of climate ambition in Canada to that of its two main trading partners: USA and EU28.

5 "Don’t Even Think About It" by George Marshall

8 UNDP: "The Road to Dignity by 2030: Ending Poverty, Transforming All Lives and Protecting the Planet."

12 medium.com: president obamas state of the union address remarks as prepared for delivery

21 thinkprogress: study were headed to 11f warming and even 7f requires nearly quadrupling the current rate of decarbonisation