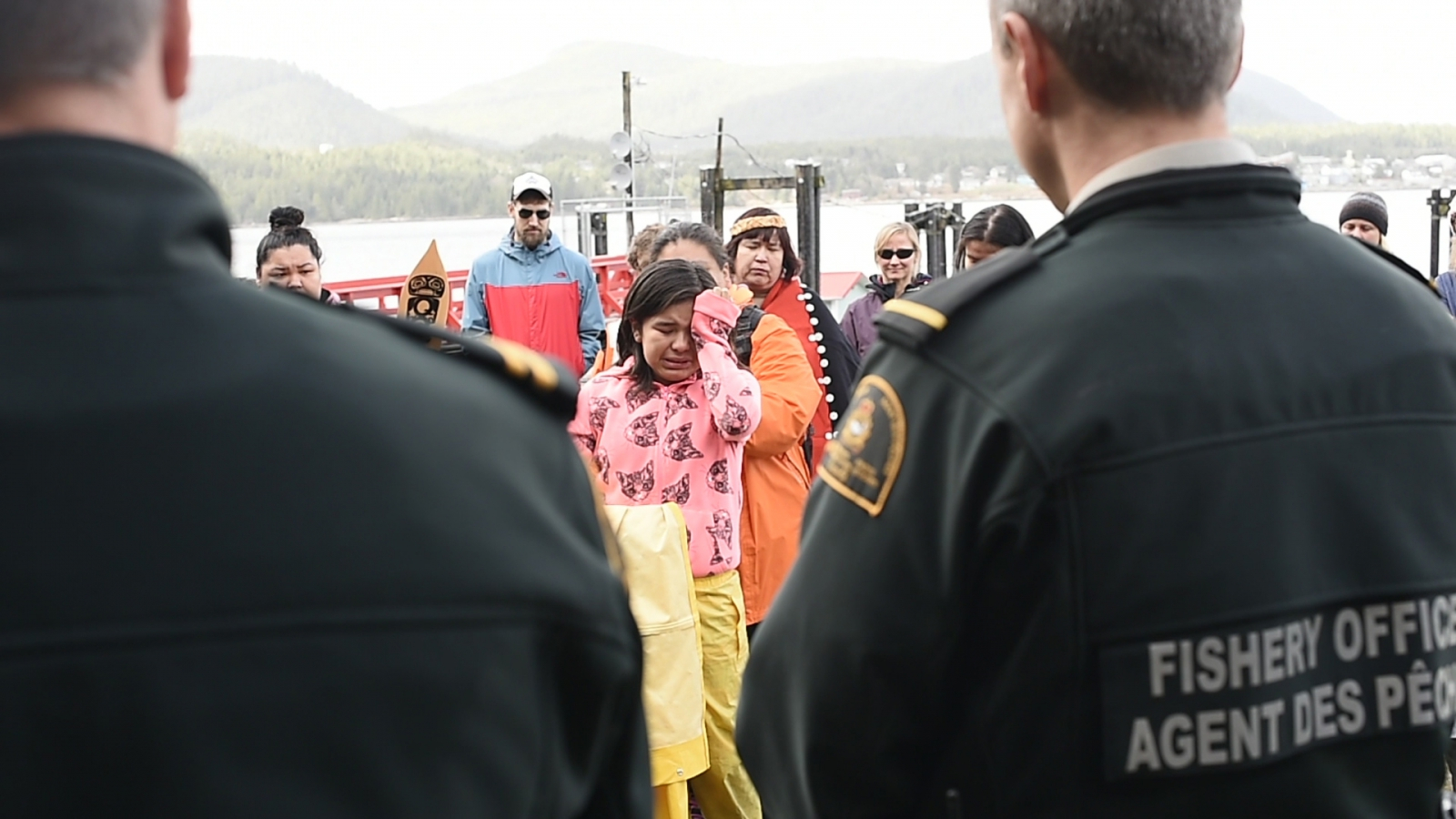 "We just say we want this to stop,” tearful 12-year-old Latoya Windsor told DFO officers about the herring fishery, which is set to resume.

Heiltsuk tears and anger were cast at Department of Fisheries and Oceans officers standing on the front steps of the federal office on Denny Island Sunday afternoon, as band Elders, leaders, women and youth pleaded for the controversial herring fishery not to resume on the central B.C. coast.

Within hours, more than a dozen band members also occupied the DFO office, promising to remain there until the herring fishery is closed. By Sunday night, elected chief councillor Marilyn Slett also locked herself inside the DFO office.

“We all rely on the water, we all rely on our Heiltsuk territory,” sobbed a Heiltsuk 12-year-old girl. "But we just say we want this to stop,” she said, removing tears.

Earlier in the day, Saul Brown, 22, had yelled scorn at the two armed DFO officers, before removing a Heiltsuk ceremonial paddle and shield off the federal office’s wall.

“It’s not just a relic that you hold up for art!” he told the officers, before a crowd of 50.

“You’re not conducting yourselves in a sustainable way, so it’s our children and youth saying, ‘we’re going to take that paddle back,” he added.

Brown then posted an “eviction” notice on the DFO’s front door.

The second wave of controversial herring fishing —with gill net boats—was expected to resume any hour. The first opening occurred one week ago, when larger seine fishing boats netted hundreds of tonnes of herring against the strong opposition of locals.

Coastal First Nations use the herring for traditional roe-on-kelp fishing, that only removes the fish eggs, and does not kill the adult fish. They believe the herring stocks are in the worst shape in years, but the federal government and industry state otherwise.

A Heiltsuk fisherman, Frank Brown, said Aboriginal people have depended on the fish around here for thousands of years. "We don’t go to Overwaitea Foods to eat,” he said, with reference to the B.C. food retail giant, whose parent company, the Jim Patteson Group, operates commercial herring boats.

“The government has allowed the fishery to open, and we’re here to tell you, it’s not going to happen,” said Joann Green, Heiltsuk hereditary chief, to the officers.

One of the DFO officers responded to the crowd:

“We did pass the message forward to our superiors in Vancouver."

“It is our understanding you want to set up a conference call with our managers, and that’s what we’re prepared to do,” the officer added.

But that didn’t seem to satisfy Heiltsuk man, Russell Windsor, 36, who was furious.

“You guys are trespassing on us! Taking our fish and our food! We live here. You guys are foreigners here!" yelled Russel Windsor, fist clinched.

“We know this area! Better than anyone else in the world. So why wouldn’t you hear our people? When all we’re trying to do is sustain our way of living.”

“We want you out of here, because you’re threatening our way of life!”

The federal government said last week in a statement:

"DFO respects the right to protest, however the Department condemns any threat of violence or reprisal against those exercising their right to practice a lawful and sustainable fishery."

The Herring Industry Advisory Board defends the catch too:

“We believe the [federal] minister has taken a conservative approach in the total allowable catch for the area,” said the industry group’s chair Greg Thomas last week.

“The catches in relative terms are small. 800 tonnes for purse seine boats, and 600 tonnes for gill nets. Sounds like a lot of fish. But in fishing terms, those are relatively modest targets,” he added.

Despite the protests, DFO appears determined to push ahead with the catch.

"We got word from the our [Heiltsuk] hereditary chiefs that the negotiations on the conference call with Sue Falinger, Director General DFO, did not go well," said Frank Brown.

He said community members —including Elders, women, children and elected and hereditary leaders —who are now occupying the DFO office have given the government until Monday 9 a.m. to tell fishing vessels not to drop their nets and anchors.

The Harper government made cuts to DFO science positions in the 2012 federal budget, including the Centre for Science Advice Pacific, which provides herring information to fishery managers. A DFO spokesperson said the cutbacks did not affect its herring counts.

RCMP and Coast Guard continue to monitor the situation. This is the second year a police presence was brought in to oversee the commercial herring catch. Court actions by First Nations have slowed the fishing in certain pockets. The Haida Nation won a recent court injunction again the herring fishing for their waters, but the Heiltsuk Tribal Council was not successful with its legal attack.