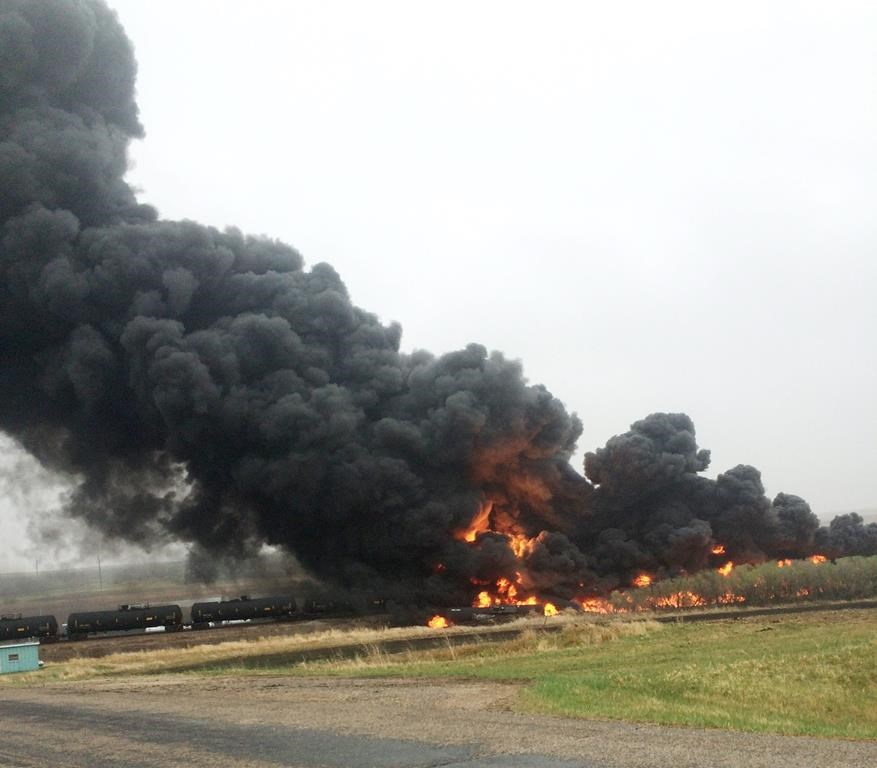 A shipment of oil involved in an explosive train derailment in North Dakota had been treated to reduce its volatility, a company official said Thursday.

Hess Corporation spokesman John Roper said the company’s oil complied with a state law that requires propane, butane and other volatile gases to be stripped out of crude before it can be transported. That conditioning process lowers the vapour pressure of the oil to reduce the chance of an ignition during a crash.

The state volatility standard, which went into effect last month, came in response to a string of fiery train accidents, including a 2013 derailment in Lac−Megantic, Quebec that killed 47 people.

Despite the treatment of the oil, six cars caught fire in Wednesday’s derailment 2 miles from the town of Heimdal. The town was evacuated but no one was hurt.

Members of Congress have called for a stricter, national volatility standard for crude moved by rail.

Reducing the explosiveness of the crude moved by rail was not supposed to be a cure−all to prevent accidents. Federal regulators last week announced a new rule that calls for stronger tank cars better able to withstand a derailment and more advanced braking systems to help keep fuel−carrying cars on the tracks.

Residents were ordered from their homes shortly after the BNSF Railway train derailed about 7:30 a.m. Wednesday outside the town, about 115 miles northeast of Bismarck. No injuries were reported.

The National Transportation Safety Board is investigating the cause of the wreck.

The six cars that caught fire on the 109−car train were carrying approximately 180,000 gallons of oil, according to , vice−president Mike Trevino. He did not immediately know early Thursday how much burned and how much was left in the cars once the fire was extinguished but he expected the operation to transfer the oil to trucks to wrap up by midday.

Once the NTSB has cleared the site, the derailed cars can be removed, and this should happen by Thursday evening, Trevino said.

Officials are trying to determine how much oil spilled onto the ground and to get it cleaned up, Trevino said.

The rail line through Heimdal runs next to an intermittent waterway known as the Big Slough, which drains into the James River about 15 miles downstream. Some oil got into the slough, but it was contained and was being recovered, state Emergency Services spokeswoman Cecily Fong said early Thursday.

The six tank cars that exploded into flames were a model slated to be phased out or retrofitted by 2020 under a federal rule announced last week. It’s the fifth fiery accident since February involving that type of tank car, and industry critics responded to the latest with calls for them to be taken off the tracks immediately to prevent further fires.

For residents of Wells County, which oil trains cross daily, the disaster was the realization of something they always feared might happen, Schmitz said.

"It’s definitely been in the back of everybody’s minds," he said.