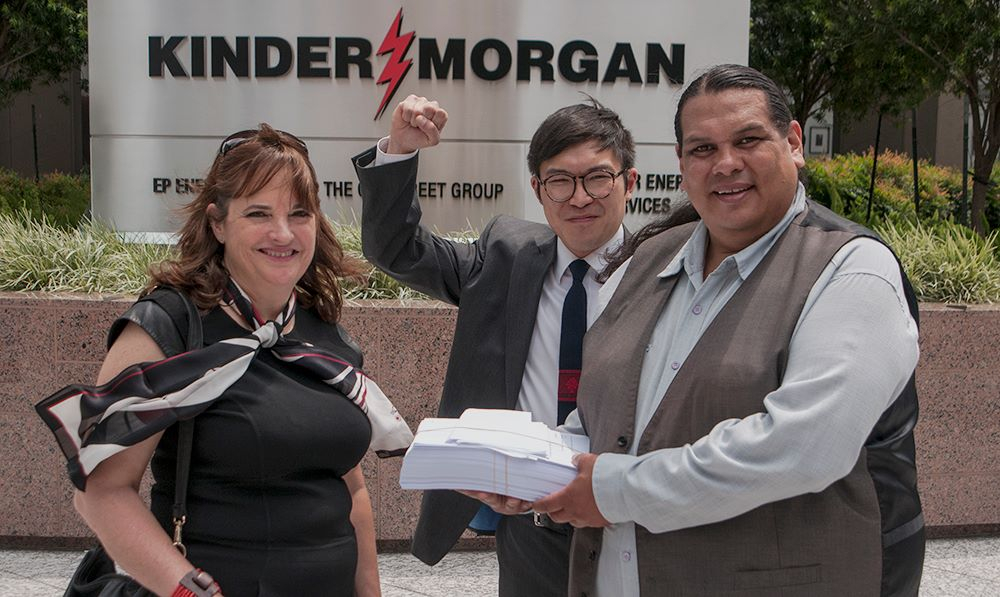 Tsleil-Waututh First Nation representative Rueben George marched into the Kinder Morgan headquarters in Houston, Texas, with a strong message from his traditional territory near North Vancouver.

"I am here to let you know that the Tsleil-Waututh will never consent to the Trans Mountain project — because it will destroy our culture, our way of life and our spirituality," George told CEO Rich Kinder and shareholders gathered for Kinder Morgan's annual general meeting on Thursday.

"We are not alone and we have the legal tools to stop it," George said.

His brief speech was part of a conference that was under an hour long. George cited recent legal victories as evidence that the Trans Mountain pipeline expansion project cannot happen without the consent of all stakeholders, including the Tsleil-Waututh First Nation.

While he spoke, George presented the Kinder Morgan CEO with a thick stack of papers. It was a petition with the signatures of nearly 60,000 people opposed to the Trans Mountain project.

"This will not happen," said George at the end of his speech. "We will do whatever it takes to stop it."

George's speech comes weeks after the Kinder Morgan CEO said he was "astounded" by opposition in British Columbia to the Trans Mountain pipeline expansion project. Kinder Morgan is applying to triple the capacity of its existing pipeline to 890,000 barrels of bitumen per day. Although the project is expected to bring jobs and over $300 million in tax revenues to B.C., it has sparked citizen opposition due to the five-fold increase of oil tanker traffic it will bring to Burrard Inlet.

In an interview with the National Observer, George said Rich Kinder remained stone-faced as he motioned to his secretary, who then retrieved the 700-page petition against the expansion.

He said the billionaire CEO did not speak to him in person, but did give a short speech about working with First Nations and how Kinder Morgan's pipeline at Trans Mountain is "good for Canada."

George said he was cut off when he attempted to respond to Kinder's remarks, and a short Q and A session ended when Kinder refused to answer his question.

After that, he said a group of "six or seven" security guards quickly ushered George and shareholder advocacy manager Lisa Lindsley out of the boardroom.

Lindsley and her political action committee, Sum of Us, were instrumental in the journey to bring the message of the Tsleil-Waututh Nation to the Kinder Morgan headquarters.

She said Kinder Morgan's reaction to the movement against Trans Mountain "highlights the fact they do need to pay more attention to environmental and social risks."

She said the ongoing struggle between the Tsleil-Waututh Nation's and Kinder Morgan's Trans Mountain project has kept the group's 5.5 million supporters on edge.

They met with shareholders of the New York State Common Retirement Fund, who have a $400 million interest in Kinder Morgan. The shareholders asked Sum of Us to present a motion at the annual general meeting for Kinder Morgan to pay closer attention to the social and environmental risks of energy projects.

Sum of Us decided the most effective way to get the word out would be to share their time with Rueben George, so he could share the Tsleil-Waututh's message at the annual assembly of Kinder Morgan financiers.

Lindsley said increased opposition to Kinder Morgan is one of many obstacles in front of the Trans Mountain pipeline which despite the corporation's public relations efforts still has a "long way to go."

Kung said he was "in the building" for George's address to Kinder Morgan's shareholders but was not allowed in the boardroom as the meeting took place.

He said when the Supreme Court of Canada ruled in favor of the Tsilqhot’in Nation's land title, that decision "shifted the goal posts for government and proponents from consultation toward consent (from First Nations)."

Kinder Morgan's Trans Mountain project is in a vulnerable negotiating position, he said, because with a "linear project like a pipeline, it needs to be 100 per cent complete before it can be one per cent effective."

But Kung argues recent court rulings have invigorated opposition to pipeline projects. He said opposition to the Trans Mountain expansion was growing, in part because of the poor response to last month's oil spill at English Bay.

"The reality is there will be spills, and we won't be able to clean them up," he said.

On Friday, the Trans Mountain website issued the following statement in response to the petition:

"Kinder Morgan deeply respects aboriginal rights and title in Canada, and we acknowledge the Crown’s responsibility to consult with representatives of the First Nations.We are committed to seeking input and engaging with as many individuals and groups as possible, to understand their interests.