Nepal villages in need of more than hope

By David Wood | Opinion | May 12th 2015
#2 of 9 articles from the Special Report: After the Nepal Earthquake 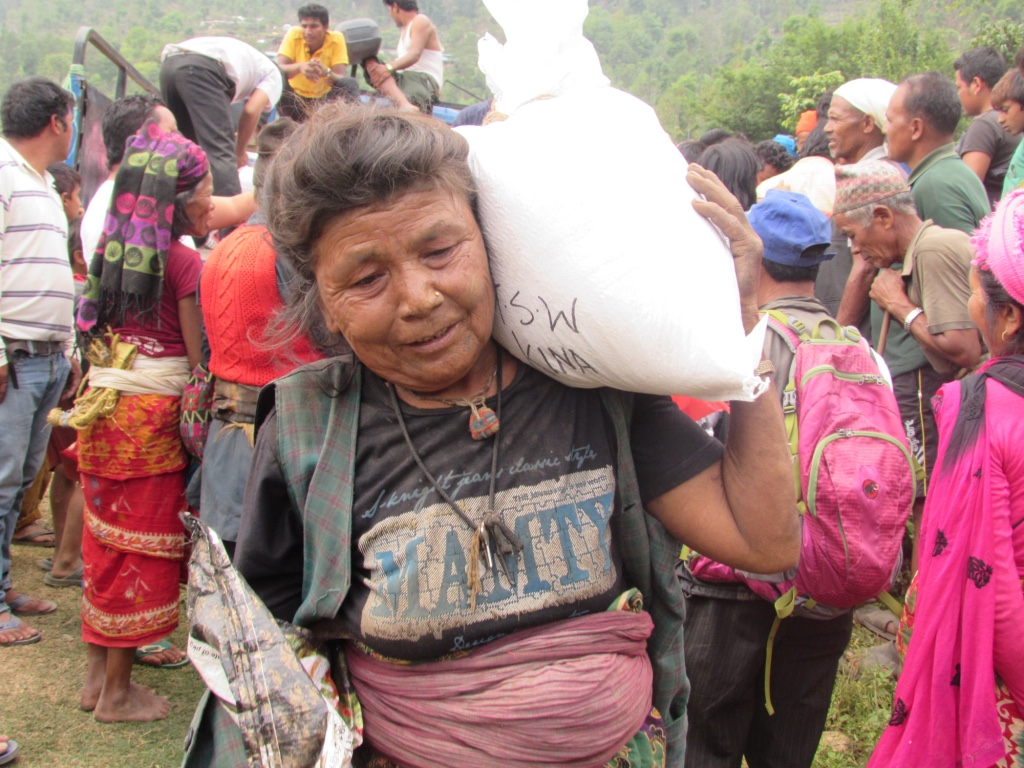 We spent our first day in Nepal getting our bearings and visiting a few sites around Kathmandu especially hit hard by the earthquake, before meeting up with one of our Nepali partners. Karma Sherpa is president of The Small World (TSW), a Nepali organization doing amazing development work in rural areas underserved by other agencies, and also where Kina.org works to support girls’ education initiatives.

My plans had changed significantly from when I had booked my annual trip. I had planned the trip to monitor the Kina girls' education programs and also intended to launch a couple of new projects in support of the girls in Kina's scholarship program.

But as John Lennon once said, "Life is what happens while you are busy making other plans."

So we quickly shifted our focus to see how we could help with the relief effort on the ground, assisting TSW in the villages hardest hit.

Our first on the ground initiative was to provide food to a village that had been overlooked since the earthquake hit. It began when a long time employee of TSW, Dawa Sherpa, had just come back from visiting a very remote Tamang village south of the Langtang area, in the middle hills north of Kathmandu.

Dawa reported that the village of Bhorle with 170 families had been hit hard, with all houses either destroyed or heavily damaged to the extent that it is not safe to stay indoors. Those remaining are now living under tarps in the fields or in the nearby jungle for protection from the rain.

The location of the village, far off the only paved road snaking up from the Trishli river valley, meant that the government or other aid organizations had yet to reach the isolated spot.

We decided to deliver enough food to the village to last at least a week and set about arranging for one large truck loaded full of bags of rice, dahl and salt. The TSW team quickly organized the food to be packaged into a single bag per family for easy distribution once we arrived in the village.

The food was purchase through a distributor in the town of Trishuli Bazaar, next to the Trishuli river running in from Tibet. Dawa had gone up early the next morning to ensure that the food was correctly packaged for ease of distribution and that we had secured a transport truck that could handle the rugged dirt road into the village.

Meanwhile, Karma arranged for a Kathmandu TV news crew to come with us to record the quake damage in the region and report on the aid delivery. Along with a reporter, a camera man, three TSW members, my stepson, Eli, we headed out of Kathmandu early in the morning in a loaded-down four-wheel drive land cruiser.

We arrived at Trishli Bazaar and met Dawa after about four hours on the road. Considering the short notice, Dawa had been amazingly efficient in organizing the truck and ensuring all the food supplies were packaged as requested. We formed a bucket brigade and loaded the 176 bags, each weighing 20 kilograms, into the truck.

The team piled back into the fully loaded truck and we quickly rose out of the river valley through a series of tight switchbacks high up into the forested hills. This area is the gateway to the Himalayan mountains where so many died on April 25 when the earthquake triggered an avalanche that buried the complete mountain trekking town of Langtang - a sobering thought as we continued our ascent.

As we pushed further up into the mountains it appeared that every village and roadside building was damaged in one way or another. The locals were living in tents or under tarps beside their houses or had formed into tight collections of mini tent cities.

In the lower sections, we saw signs of local and international emergency aid organizations such as the Red Cross providing support as best they could.

The larger towns bustled with people going on about their lives, creating an odd mix of normality interspersed with the fight for survival, something we witnessed as we passed trucks on the roadside and at official local aid stations handing out bottles of water, boxes of dried noodles, or sometimes bags of rice, to crowds of people who clamored for their share.

Finally, we spun off of the last paved road at a town called Kalihathan and onto a dirt track. We were told the dirt track would take us to our destination in short order, but it was barely wide enough to accommodate the truck. Steep, rocky, hairpin turns required the vehicle to back up to make it around corners, as we continued up and up.

At one point we could see the village back down the mountain, thinking that somehow we missed a turn, but where? We crawled along on open slopes of rock falls, snaking through jungle then back down the slope through a series of steep switch backs, finally through a pine forest before emerging into the village.

It took about 2 hours after picking up the food when we finally arrived at the village with people coming out to meet us. Smiles and waves from the kids and young women, and looks of concern from the women and the village elders.

People initially started swarming the truck asking for their share but Karma and the team quickly got everyone calmed down with assurances that everyone would get food. It was suggested that the women and girls get their bags first then the men, with queues forming quickly and more orderly than what we saw in the towns coming up.

Dawa had stayed the previous night with the villagers and had made a complete list of all the families, so we knew what we needed, with contingency allowance just in case. As we checked names off of the list, the distribution went smoothly. Every family received one package - with the exception of those families who lost a loved one; they got two bags.

As the truck started to empty, moments of joy occurred among the villagers with the knowledge that they would have enough to eat for the coming week. Some of the women started dancing while the kids played.

When the food was distributed, I spent time walking around the village and talking with an older boy who spoke English. He told me that at the time of the quake most of the villagers were out working in the fields or in the jungle, resulting in few deaths and only one serious injury to a child. We reached the school in the village and found it heavily damaged, with a rock wall fallen over and walls collapsed.

The boy said that the kids in the village would not be able to attend school until it was repaired. He didn’t have much hope that it would be fixed anytime soon; nor did I, considering the vastness of the destruction we had seen.

The villagers had seemed angry that, until now, no one from the outside had come to their aid. After nature had sucker punched them and then the outside world had left them to their own devices for two weeks following the quake, our brief visit provided a morale boost.

Our original plan was to spend the night in tents, but a large thunderstorm was rolling in and we felt it was best to leave in case the rain triggered landslides along the steep slopes that the road cut through. The supply truck was quickly loaded up with about 50 exuberant villagers all laughing and giggling as they squeezed into the bed of the truck to give it enough weigh to get up the sharp road leading out of the village to the cutbacks above.

On the drive back to Kathmandu, through the darkness of night and a torrential downpour, a TSW staff member, Kalyn Gurung, explained to me that even though this food would only last a week he believed that it would give people hope that all was not lost, and that others did care, allowing them time to regroup.

As we roared back towards Kathmandu with the headlights from the passing transport trucks cadillac'ing across the windshield, it was obvious that the government agencies and aid organizations need to provide more than hope to the Nepali people.