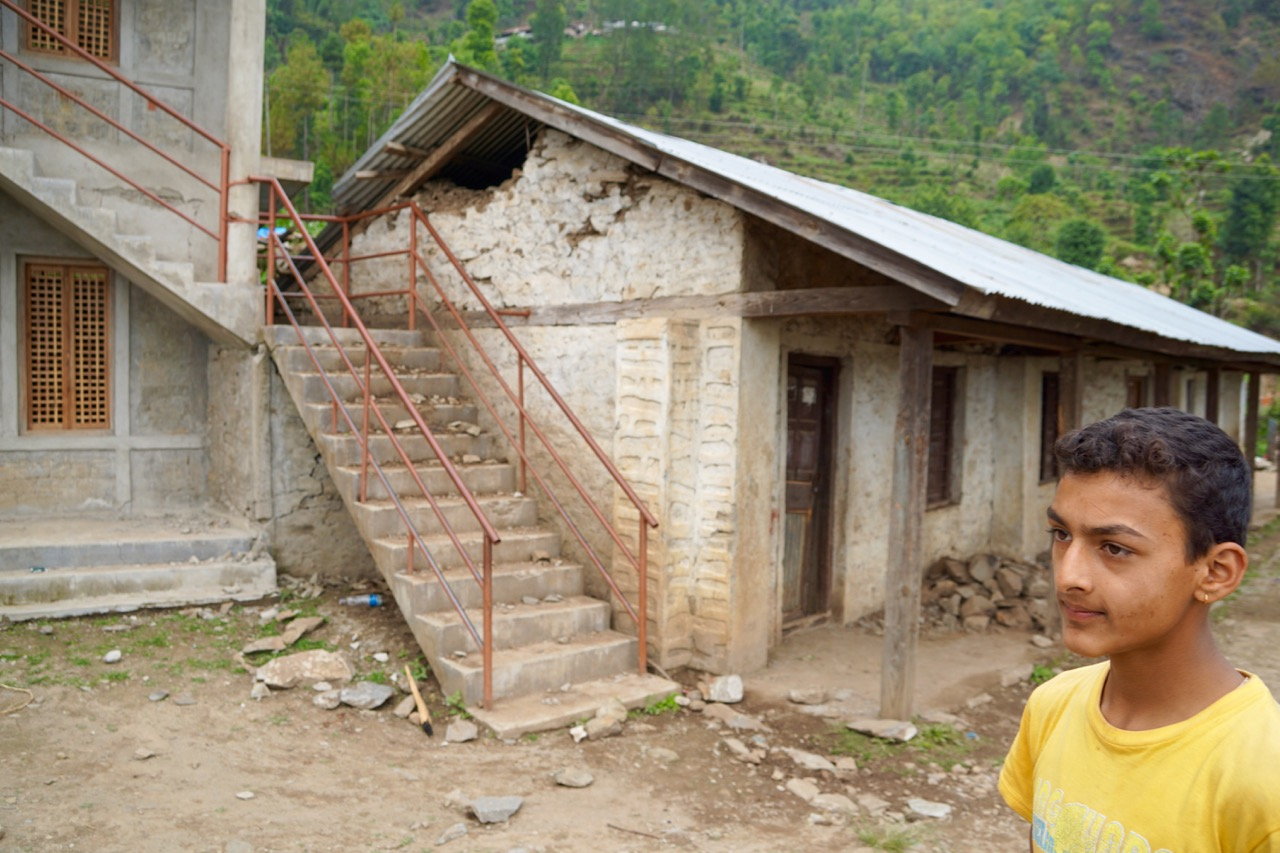 When the earthquake struck I had already booked my annual Nepal trip to review the Kina girls' education programs and kick start a new technology project to improve support for girls at risk in rural communities. But the crisis caused by the April 25th earthquake shifted my priority to that of helping one of Kina's long term Nepali partner organizations, The Small World (TSW), deliver food and shelter to villages not yet reached by the government or large aid organizations. The following are observations made on the ground during this trip.

The recent earthquakes and numerous aftershocks in Nepal have shattered its school system, leaving vulnerable children at risk. This is a disastrous set back in a country with a 66% literacy rate and where school attendance has risen to 95% in recent years, up from 64% in 1990. And it's especially disastrous for girls who are at high risk for not returning to school, or being exploited during this time of crisis, driven by their lower social status and gender bias.

The Nepal Government extended a country wide school suspension until the end of May after the M7.3 quake on May 12th hit the eastern region, as food and shelter relief efforts became the priority across the hardest hit areas. An estimated one million Nepali children will be without school even when the government lifts the suspension. Said Tomoo Hozumi, Unicef’s representative in Nepal, in a New York Times article, “Prolonged interruption to education can be devastating for children’s development and future prospects.”

On May 9th, Kina.org and The Small World delivered food aid to a remote Tamang village of Bhorle that had not seen any relief aid for nearly two weeks after the first earthquake. The village is located in the hills below Langtang and had been devastated with most of the houses severely damaged, including the local school.

A boy studying in Grade 9 showed me the damaged school with walls collapsed and roof sagging. "I don't think that any of the kids in the village will be attending school for a long time," he said.

He was not sure what he was going to do, but thought he might go to Kathmandu to live with relatives and attend school there. This will be difficult, as a number of the schools in the capital have also been damaged and will remain closed. With the anticipated influx of people from the rural areas hit hard by the quakes, there may not be room for all the students. Regardless, for most of the kids in rural villages this is not a viable option, either financially or practically.

Two days later on May 12th we were delivering tarps to the remote village of Ghuskun, which is nestled in a beautifully terraced bowl high above the town of Barhabise in Sinhupalchowk, when the M7.3 earthquake struck the area hard and fast. After the panic settled, I had the chance to talk with two sisters from the village who were in Grades 9 and 10 and had been attending the secondary school in Barhabise. The sisters said that the secondary school was destroyed by the first quake on April 25th and they were deeply saddened that they wouldn't be in school for a long time to come. The only chance to continue their education any time soon now rests in somehow moving to Kathmandu to attend a boarding school, but this seemed unlikely for the family to manage financially, as they were living lean, producing what they could from the land.

The level of destruction everywhere you turned in this remote corrugated mountain terrain was simply overwhelming. It will take many years of hard work with government and international assistance for this area to recover. Meanwhile, the kids in this region will loose the chance for the education that they should be entitled to.

There are now numerous estimates being bantered about by the government and NGOs on the number of schools impacted, ranging from 5,000 to 10,000 schools damaged with at least 1,000 to 2,000 destroyed completely throughout the effected areas of Nepal. But the final counts have not yet been determined. With the government now mobilizing teams to review each region of the country and develop a plan of action with regional government groups and local development organizations, a clearer understanding of the scope of work will begin to emerge over the coming weeks and months.

According to Joint Secretary Hari Prasad Lamsal, spokesperson at Nepal's Ministry of Education, "A majority of schools that were destroyed are older than 50 years and were built out of mud and mortar and same number badly damaged."

For example, in the Solukhumbu district, it is estimated that 100 schools have been severely damaged with over 50 schools totally destroyed in the quake on May 12th. It is expected that these numbers will increase once the school by school assessments are completed in the coming weeks. Karma Sherpa, President of the The Small World (TSW), a Nepali rural development organization, is actively assessing and planning the rebuilding of schools in the Solu area where TSW works. He said that “we can provide temporary schools more quickly than we can rebuild or repair permanent structures”. He feels that with the monsoon bearing down it is essential to be creative in the approach, and figures it will be possible to build temporary schools out of roofing tin, local bamboo and clear plastic tarps, if and when the materials are available.

The building of temporary structures would allow students to get back to their studies in weeks rather than months or years waiting for a more permanent building to be rebuilt. Karma estimates that a temporary structure for a small school could be constructed for as little as $3,000 USD, about 10% of a permanent structure, utilizing local skills and labor. One goal with this approach would be to re-purpose the roofing materials to a new school or, for that matter, other housing reconstruction requirements in the village.

From my own experience in Nepal, a more serious challenge than rebuilding is ensuring that there are teachers available to teach the kids once the facilities are back in place.

In most of the rural schools the teachers are almost exclusively from Kathmandu or other remote villages. During normal periods, the senior teachers disappear for days or weeks at time to visit family, leaving a skeleton crew of junior teachers or a teacher who is homegrown from the local village to carry the burden. Its expected that the vast majority of teachers have already returned to their families since the earthquakes to be with loved ones and help their families.

It will take a lot of effort and imagination to kick start the education system nationwide with the necessary temporary facilities, supplies and teachers.

For now, the devastating earthquakes that have rocked Nepal have put school on hold for the majority of kids across Nepal until the government can figure out how to deal with the crisis in the short term and start the long term rebuilding efforts. The rebuilding of schools is just one piece of the puzzle.

Some girls aren't waiting. At an innovative home for girls in Kathmandu that I visited shortly after the M7.3 quake, I found 25 girls living outdoors in tents with the older girls teaching the younger girls, improvising until the local government schools open back up. These girls expressed how much they want to get back to school to realize their dreams of having a rewarding job and the ability make a living for themselves and future families.

In 2002, I started Kina.org, to tackle poverty in Nepal by providing scholarships to girls at risk with the goal of keeping girls in school through their complete educational arc. While teaching in Nepal in 2001, the demographics in the rural schools were skewed. Girls dropped out earlier than boys. They had to work in the home or fields, looking after younger siblings, or were married off at a young age.

Positive strides have been made in the last 10 years or so, with more girls than ever getting past SLC (grade 10) and into advanced education. But the forces of the inherent gender bias still present huge challenges for girls and women of any ethnic, caste or social class; whether it be advanced education, getting a job, or simple equality in the community structure.

The big question is what will be the impact on the girls who have now had their education interrupted indefinitely? Will they loose the precious ground that they have worked and fought so for hard for over the past decade?

Only time will tell.

During natural disasters such as this, girls have higher mortality rates because families are less likely to seek medical attention for them, according to The Girl Effect, a coalition dedicated to ending poverty for girls and young women. Girls who lose their families in natural disasters are at greater risk for physical and sexual abuse and trafficking. According to Unicef, approximately 50,000 girls and women work in restaurants, dance bars and massage parlors in Kathmandu. Around one-third of them are sexually exploited in these jobs. Between 5,000 and 7,000 Nepali girls are trafficked every year across the border to India and most of them end up as sex workers in brothels in Mumbai. Girls in disaster zones need different kinds of protection than boys.

The Girl Effect calls educational funding for girls the most powerful force for social change in the world. And Nepal will need plenty of that to overcome the effects of the recent earthquakes. That's why grassroots organizations like Kina.org are more important then ever to help play a part in the rebuilding efforts. Kina is accepting donations for earthquake assistance as well as for funding for at risk girls in rural Nepal to remain in school. Both are needed in the long term recovery period.