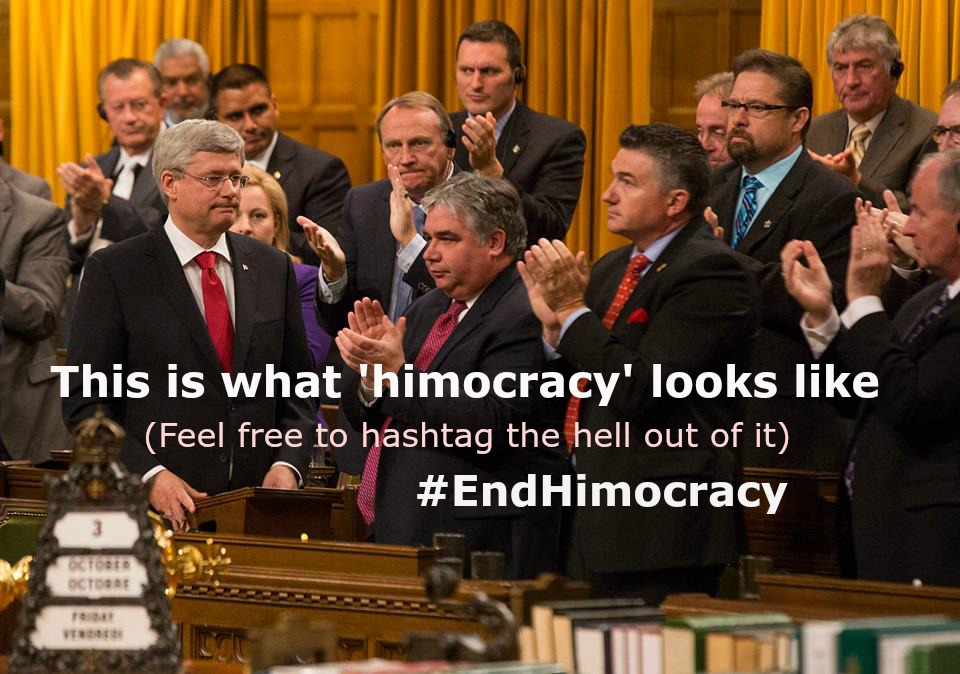 Here’s an election-year riddle: What do the democracies of Canada, the U.S. and the U.K., France and Australia all have in common?

These five countries have archaic voting systems that help ensure women aren't equally represented in political decision making. In short, they're all sexist.

Our winner-take-all "First Past the Post" (FPTP) approach to voting suppresses the number of women in office.

I call it "himocracy." Feel free to hashtag the hell out of it.

In this patently unfair system, Canadian women live under a political glass ceiling. Only 25 per cent of our federal representatives are women. This puts us at 47th in the world for female representation, behind Germany, Denmark and Switzerland... oh and Angola, Iraq and Afghanistan.

Australia has the same problem with its “alternative voting” (AV) system.

The graph below shows that the top eight countries in the world for female representation at the highest levels of government use what is called "proportional representation" (PR), versus "winner-take-all" systems in their elections.

Bear in mind that the United Nations has stated that for women’s concerns to be heard at the national level, women must make up at least 30 per cent of a nation's elected representatives. Countries that don’t have this suffer from what the UN calls a “democratic deficit."

A few facts about "winner take all" voting systems

There are primarily two kinds of democratic voting systems: winner-take-all and proportional.

In Canada, more men than women vote for the Conservatives. Women are more inclined to vote, but this does not translate into women being well-represented.

Under our winner-take-all system, with just 39 per cent of the vote, a party gains a "false majority" and takes complete power.

They can then sweep aside the concerns of the majority, as well as the priorities of women. The majority of women's voices are silenced.

Here are those shocking statistics:

What else do the democracies of Canada, the US, the UK, France Australia and the US have in common?

None break the most basic barrier for representation of women in politics— never mind exceed it.

“I rarely hear a woman say she doesn't want proportional representation,” says Kelly Carmichael of Fair Vote Canada. “When we get pushback, it comes from men— and often partisan men who harbour dreams of their own fiefdom built on a 39 per cent ‘majority.’''

Would men quietly accept an electoral system that reduced their representation to 25 per cent?

Our system was invented in Britain when the world was thought to be flat and women couldn't vote. It’s a relic of an era when married women were legal chattels of men— unable to sue for divorce if they were beaten or raped, and no right to own property, even it if was theirs before marriage.

We’re still living in a warped, sexist imitation of a democracy. The consequences are evident in our social policy, in how women are treated in parliaments here and around the world (France providing the most repellent example in recent memory), and in how long it has taken to address daycare affordability or build a proper plan for seniors in this country. And in many other issues.

It’s true that there are anomalies at the provincial level.

Rachel Notley has 33 per cent women in her House. But her power to make the kind of lasting changes we all need is hobbled by her false majority. The more she does, the more vulnerable she is to the next false majority from the right-wing.

This is the reality of a true PR majority which allows Angela Merkel in Germany to implement austerity while building a renewables-based economy, raising the minimum wage, increasing day care spaces and making post-secondary tuition free at the same time.

Here's another riddle for you: What do Maude Barlow, David Suzuki, Nathalie Des Rosiers, Thomas Mulcair, Dan Akroyd and (so far) 110 sitting MPs have in common?

They all want to overturn our "winner take all" system and a century and a half of "himocracy" in Canada.

Switching to PR will give us a fair voting system. It’s an urgent civil rights issue, and it’s moving right to the centre of national politics, fast.

All 94 NDP MPs in the Official Opposition supported PR fair voting in a vote last December. So did both the Greens and most independents. And more than half the Liberal caucus— even though Justin Trudeau’s position on it has been equivocal at best.

While there has been some increase in female participation in recent years, as recently pointed out by former prime minister Kim Campbell, who was our one and only female PM in history, at our current rate of growth it will be generations before women in Canada are equally represented in parliament and legislature. I am not willing to wait.

Canadians have agreed that PR solves the problems created by a voting system that stifles the voices of women.

Why proportional representation works, and what you can do about it

As for why proportional representation, which I’ve come to simply call “fair voting,” works to elect more women, it’s simple. With PR, parties are required to list all their candidates. And parties that don’t field women candidates are exposed as sexist.

A PR system of fair voting allows the public to make informed choices about how much, or how little, each political party represents the voices of women.

There are many other reasons to support a PR fair voting system. Canadians yearn for MP co-operation to meet the major challenges of our time. PR rewards and encourages cooperation amongst MPs. Research has proven that, because PR encourages governing parties to work together with minority parties to achieve their goals, countries with fair voting systems have far more progressive policies on renewable energy, climate change and income equality, among other critical issues.

Winner-take-all systems, on the other hand, encourage partisan bickering and the kind of cover-ups and disinformation campaigns with which we have sadly become so familiar in our governments. No wonder the idea of PR strikes fear into the heart of the old-boys clubs in the corporate boardrooms and political back rooms. They will actually have to be cooperative and accountable.

Polling also shows that with PR, people simply like their governments more and believe they represent them more fairly. That means they participate more in elections. Makes sense right?

And all that means more participation by voters across the spectrum instead of what we have now: entire generations that feel alienated from democracy.

Tell 2015 federal election candidates that getting your vote requires them to commit to support proportional representation and fair voting.

Ending sexism in our electoral systems can be accomplished with one simple act.

Vote for a candidate who will implement PR in 2015.