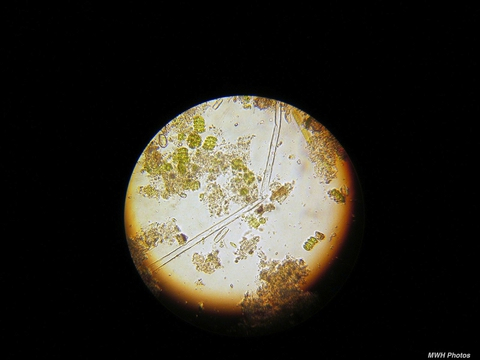 We're surrounded by life, but Earth's most plentiful living things are invisible to the naked eye. Microbes are not only around us, they live on and in us. Although some cause maladies ranging from food poisoning to smallpox, there are many we couldn't live without.

Beneficial microbes break down food and produce vitamins in our guts. They coat our skin, protecting us from attacks by harmful microbes. Outside our bodies, they decompose organic waste, fix nitrogen and produce half the world's oxygen.

Scientists refer to the microbial communities on and in our bodies as "microbiomes". Every one of us hosts as many as 100 trillion microbes — our guts alone are home to 500 to 1,000 different bacteria species!

Just as human activity is harming the diversity of visible life, it's also diminishing microbial diversity. As researchers learn more about the profound ways good microbes keep people healthy, they're also seeing how our urbanized, indoor lifestyles have transformed our microbiomes, increasing the risk of disease.

Just as we pollute the environment outside us, we can also pollute and upset the "normal flora" of our bodies by what we eat and do. Effects range from indigestion to deadly disease. One modern consequence of our lack of understanding about the necessity of healthy microbiomes is seen in our use of antibiotics. Despite their benefits, decades of overuse for personal sanitation, minor maladies and to promote growth in livestock has led to new illnesses and infections as sometimes-harmful bacteria evolve to resist antibiotics and our own microbial defences.

According to Alan Logan, author of Your Brain on Nature, diet and where we live and play have a tremendous influence on the microbial ecosystems on our skin and in our noses, mouths and intestines. Logan and experts from a range of disciplines at the Natural Environments Initiative workshop at Harvard School of Public Health found people who live in areas with rich plant diversity have more diverse microbiomes. The air we breathe, the soil we dig and the outdoor plants we come into contact with include a variety of microbes that may be absent in indoor and built environments.

Researchers have even found digging in dirt, whether gardening or playing, can benefit our physical and mental health. A microbe common to mud and wet soils, Mycobacterium vaccae, has been shown to influence brain neurotransmitters to reduce anxiety and improve cognitive functioning. Another microbe encountered in natural environments, Acinetobacter lwoffii, has been shown to benefit the human immune system, preventing asthma, hay fever and other ailments in children who have been exposed to it — although it can also cause infections and gastric problems for people with compromised immune systems.

Research by Ilkka Hanski and colleagues at the University of Helsinki found microbe diversity reduced the incidence of allergies. They compared adolescents living in houses surrounded by biodiverse natural areas to those living in landscapes of lawns and concrete. From skin swabs, they learned that higher native-plant diversity appears to be associated with greater and more diverse microbial composition on the participants' skin, which led to lower risk of a range of allergies.

It's likely that, as we learn more about the microbial world, we'll find other beneficial microbes in nature. The research also highlights the importance of overall biodiversity to human health. A good solution to protecting biodiversity, from the smallest microbe to the largest animal, and to keeping ourselves healthy, is for all of us to spend more time outside.

According to the American Public Health Association, "People of all ages and abilities enjoy higher levels of health and well-being when they have nature nearby in parks, gardens, greenways, naturalized schoolyards and playgrounds, and natural landscaping around homes and workplaces."

As this year's 30X30 Nature Challenge wraps up, consider it an inspiration to get outside every day of the year. It's good for your health, mood and microbiome — and nature!