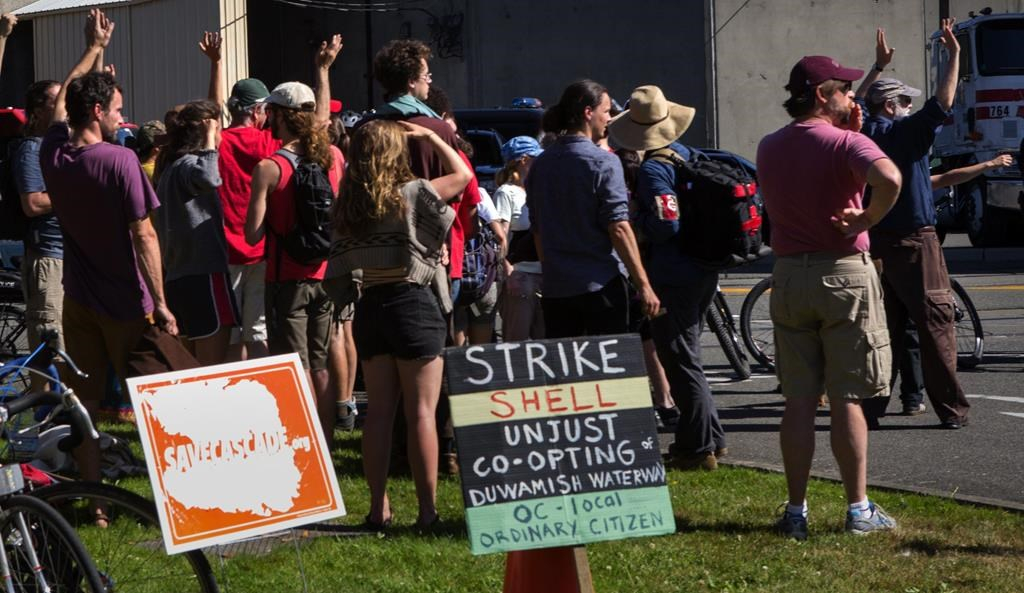 In the morning, five activists tried to block work at the port to prevent the ship from heading to the waters off Alaska, a spokeswoman for Shell No Action Council told The Seattle Times.

Seattle police arrested five members of a group called the Seattle Raging Grannies, who had chained themselves together in rocking chairs. The five women — the oldest was 92 — were arrested for investigation of obstruction and pedestrian interference. They were processed then quickly released from the department's Southwest Precinct in West Seattle.

They were arrested for blocking train tracks outside Terminal 5, officers said.

Trains going through the area were held from 6:30 a.m. until around 10 a.m. because of the protest, BNSF spokesman Gus Melonas said.

The grannies were part of two simultaneous protests in Seattle on Tuesday morning against Shell's offshore oil rig, which is at the terminal being prepared for Arctic drilling this summer.

A group of younger protesters camped out on an overpass above, with two heavy oil drums and signs, while the grannies chained their wooden rocking chairs together on the BNSF Railway tracks below. The women were also bound together by homemade arm sleeves.

Seattle police Lt. Jim Arata warned the younger protesters that they had to move their oil drums and get off the overpass above Terminal 5 or face arrest. When officers arrived with a truck full of saws, jackhammers and other heavy-duty tools in case the protesters were chained to the oil drums, the protesters got up and walked away.

Members of the device-removal team spent about 10 minutes sawing and cutting into two separate "sleeping dragons," which linked four of the grannies together by the arms.

When police sawed through the duct-tape-covered arm sleeves, they found rope, rebar, metal and burlap, Arata said. Police covered the grannies in fireproof blankets to protect them from flying debris while officials cut through the sleeves.

Later Tuesday afternoon, activists demonstrated outside the Port of Seattle headquarters. A commission meeting was quickly adjourned when protesters disrupted the meeting, and one person was arrested for trespassing, said port spokesman Peter McGraw.