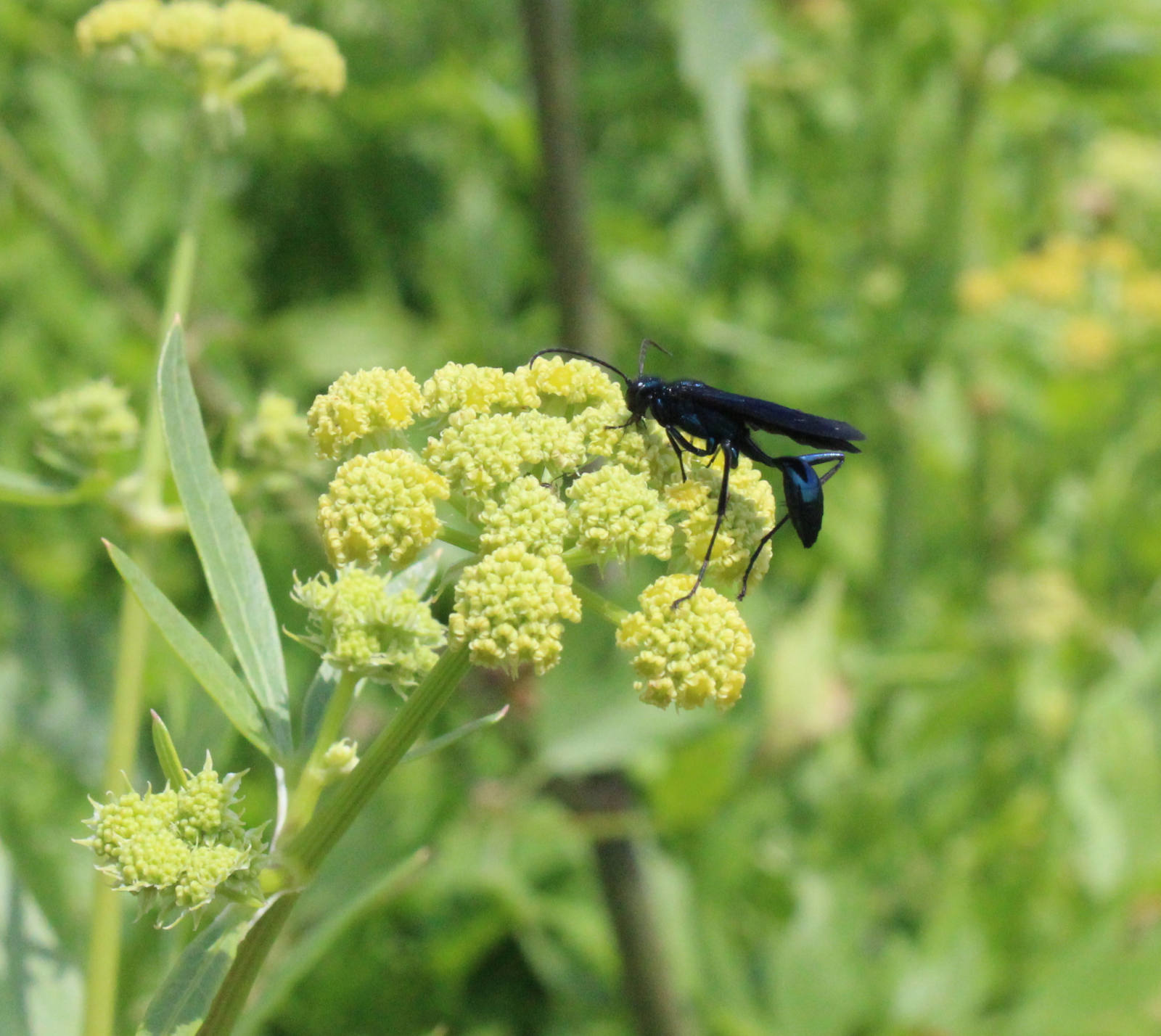 The blue dauber wasp pollinates milkweeds and other plants in southern Canada and the United States. Photo: Susanna Klassen
Previous story
Next story

Bees are in the headlines again as governments in North America are taking action on pollinator health. Last month, the Obama administration released the first U.S. national strategy, which represents multiple steps forward for one of the biggest ecological crises of the century. From implementing pesticide application guidelines, to ensuring habitat quality and quantity, the proposed measures offer Canadian policymakers a crucial lesson: a single-strategy approach is insufficient to save pollinators.

On June 9, the government of Ontario released a new regulation to reduce neonicotinoid (neonic) use, a class of pesticide under fire for recent honeybee deaths. Neonics are systemic pesticides. While contact pesticides remain on a plant's surface, neonics are taken up by the plant and transported to all the tissues (leaves, flowers, roots and stems, as well as pollen and nectar).

A follow-up to the ministry’s announcement from November 2014, the ambitious reduction target of 80 per cent in three years has elicited a strong response, notably from farmer groups concerned with overburdening regulations and associated changes to growing practices that could inhibit crop productivity. The bold stance shows promise for effective pesticide regulation, but by focusing solely on honeybees and neonics, the Ontario approach risks missing the forest for the trees.

Our agricultural security cannot be reduced to a problem of honeybee deaths, or of neonics, for two important reasons.

First, honeybees are not the only pollinators needing protection. In addition to honeybees, which are managed and domesticated, countless wild bee species pollinate Canadian crops. Research from 2013 in the journal Science synthesized data from over 600 field sites and 41 crop systems around the world concluded that wild insect pollination was twice as effective in promoting fruit growth as that from honeybees. A study published in 2014 by researchers from France and the UK confirms that honeybees cannot solve all of our pollination problems: their results, from 54 of the most common crops from France, showed that simply adding honeybee hives to fields of pollination-dependent crops did not make up for the loss of natural pollination from wild insects.

Second, neonics—while important—are not the only major risk to pollinators. Large-scale honeybee losses were recorded at least as early as the 1940s in the United States, well before neonics were invented. Pests, mites and diseases were found to be the cause of massive die-offs then, and they are still contributors to current declines.

One of the biggest issues is that the naturally diverse vegetative landscapes that provided ample year-round nectar and pollen (food) sources for pollinators have become agricultural fields, most of which are now made up of a single plant species that provide food for only a few days. This has made it difficult for pollinators to find the quality and quantity of pollen throughout the year that they need to thrive. Pollinators are under pressure from all sides, so isolating any one cause is unlikely to save them. Only banning neonics is like trying to save starving refugees only by not poisoning them: it’s a good start, but nowhere near enough.

To be sure, there is increasing evidence that neonic pesticides contribute to high mortality rates in honeybee colonies. Policy measures such as in Ontario, or the European Commission’s more stringent moratoriums, demonstrate that evidence coupled with political will can result in decisive regulatory action towards protecting bees.

It remains to be seen whether Obama’s new pollinator strategy will get enough traction for long-term results on the ground, but at least it fills some major gaps left by Canadian approaches, including the Ontario government’s bold regulations. Regulating neonics is an essential first step, but we must not be distracted from the deeper problems of a frail agricultural system.

If Canadian governments are serious about protecting pollinators, they will need a multifaceted approach that addresses the problem at the core: pollinators, not just honeybees, are being squeezed out of a landscape where natural habitat is increasingly being replaced with intensive farms that are mostly barren for bees.