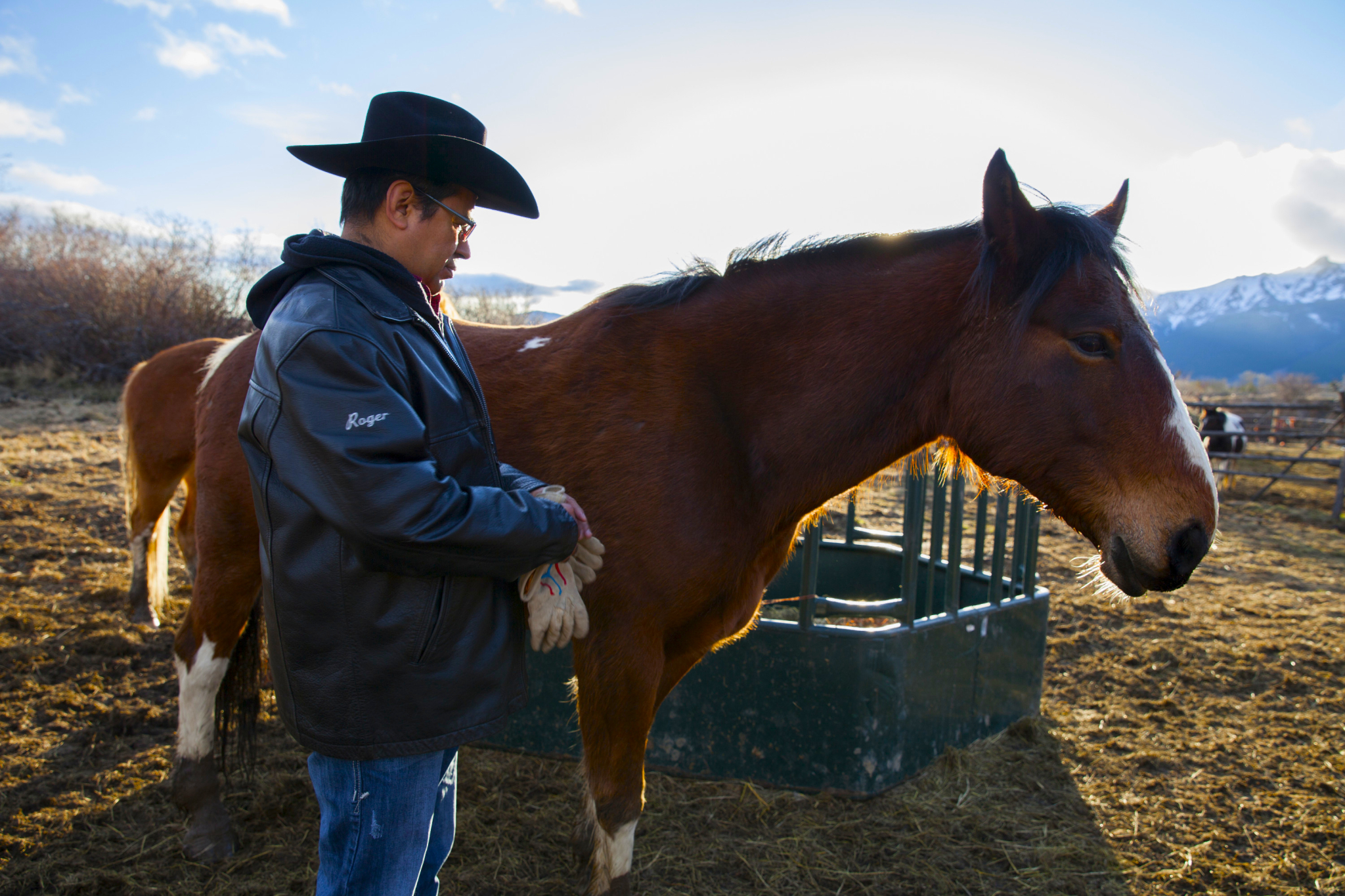 In the storied Nemiah Valley of the Chilcotin region of northern B.C., where tales of a bloody 150-year-ago war between Tsilhqot'in people and gold-seeking pioneers still loom large, Chief Roger Williams stands just a little more proudly among his wild horses this year.

On National Aboriginal Day, his people have the satisfaction of standing on native land owned outright with Aboriginal Title granted by the Supreme Court of Canada one year ago.

And just as satisfying, he says, has been how that landmark ruling is now spreading across Canada.

Bands, from the Heiltsuk on the west coast to the Mi'kmaq on the east, and many Indigenous nations in between, are now invoking the Tsilhqot'in decision in Aboriginal battles over unwanted industrial incursions.

Multi-billion-dollar resource projects, past and proposed, are being challenged. Nearby Tk’emlups and Skeetchestn Indian bands in B.C.'s interior will use the decision on Sunday to officially declare Aboriginal title on the site of a proposed Ajax copper-gold mine.

And notably, oil and gas pipelines from Alberta are taking a hit.

The Tsilhqot’in decision will be a big part of the dozen-plus Aboriginal law suits against the Enbridge Northern Gateway pipeline in October, and the Tsleil-Waututh near Vancouver say they'll invoke the decision in a court challenge against Texas-based Kinder Morgan's Trans Mountain pipeline expansion from Edmonton to Burnaby.

Chief Williams hears about the battles from afar.

“It’s been such an honour to hear First Nations say, ‘we’re going to pull a Chilcotin,’” he said with a grin.

The June 26, 2014 Supreme Court of Canada decision was arrived at after an astonishing 25-year court battle, initially over a logging dispute.

Williams and other band leaders were huddled in a Vancouver board room awaiting the verdict. And when the email came, with its unexpected eight-to-zero approval of the highest court judges, the room erupted in celebration.

“It was so surreal, it was like a ‘game changer,’” said William.

It was the first time in Canadian history that a court had declared Aboriginal title to lands outside of a reserve. First Nations and environmental groups immediately heralded it a "landmark" ruling, while industry said it provided greater “certainty” for their obligations to consult.

But privately, Victoria-based lawyer Robert Janes says, the ruling’s requirement to first bring Indigenous leaders to the boardroom at the very start of a project’s conception has not been an easy transition.

“That’s been a hard pill for governments and industry to swallow,” said Janes.

"Tshilqot'in was about about the Aboriginal right to control resources, and require consent from industrial proponents.”

Tshilqot'in said the Supreme Court had rejected the “postage stamp” view of Canada's reserve system. "Aboriginal title is not restricted to small, intensively used sites. Aboriginal title extends to all the territory that a First Nation regularly and exclusively used when the Crown asserted sovereignty," stated Tsilhqot'in National Government.

Janes said the ruling is more legally useful for bands that have not signed treaties —like most in B.C., and in pockets in Eastern Canada. But it's also emboldened communities.

“Tsilhqot’in’s biggest effect has been political. There’s no doubt it energized First nations, and woke people up to how far they can go with litigation.”

When Assembly of First Nations National Chief Perry Bellegarde was elected in December, he spoke with passion about the decision's relevance at the AFN convention.

“To Canada we say, for too long have we been dispossessed of our homelands and the wealth of our rightful inheritance,” he told hundreds of chiefs in Winnipeg.

“Canada is Indian land,” he added.

The Saik’uz of B.C. are using the Tshilqot’in ruling in their pollution trial against smelter giant Rio Tinto in Kitimat. The Atikamekw of Quebec have declared "no development" without their say in more than 80,000 square kilometres of land near Montreal. And the Mi'kmaq in Nova Scotia contend the Tsilhqot'in case injected new steam in to their legal challenge over fracking.

Even in the heart of Alberta's oil sands in the province’s northwest Peace River region, Tshilqot’in’s ripple is being felt. Lubicon Cree are using it to sue a local oil company.

"It was a huge boost legally to our position,” said Garrett Tomlinson, a Lubicon Lake Nation spokesperson and local reeve, about 500km northwest of Edmonton, AB.

The Lubicon oppose the huge build up of in situ heavy oil sands development and fracking that’s cleared tens of thousands of hectares of boreal forest, injected roads into wildlife migrations routes, and causes ungulates and fish to be more cancerous tumours, they claim. Tomlinson says oil pipeline spills seem to occur every other month too.

“This idea that rising tides lift all boats has never been the case for the Lubicon. The Alberta government and energy companies have never stepped in to include Lubicon in the economy. It’s always been divide and conquer, get the resources and get out.”

“There’s been $13.5 billion in royalties from Lubicon territory alone for the province of Alberta’s benefit, while people around here have an average income of $6,000 per year, and we lack basic infrastructure like running water.”

The band is unique in that Indian Act surveyors in 1898 pushed through this northern area signing chiefs up for treaties, but infamously missed this community. So they’ve never relinquished their land rights, and want restitution for the “environmental violence” committed.

In the Maritimes, where many First Nations signed "friendship treaties" but did not extinguish their rights, the Signigtog Mi'kmaq are suing over fracking issues. Lawyer Bruce McIvor says the Tsilqtot'in decision means pipeline companies are not able to get away with mere "box ticking" in their consultation efforts.

"They will be subject to the much more onerous burden of obtaining consent or justifying infringements," wrote McIvor.

"The Supreme Court of Canada has provided important clarification in law on Aboriginal title. Where the decision applies, it has required extra effort by industry to gain an understanding of how it relates to the lands in which we operate,” wrote spokesperson Chelsie Klassen from Calgary.

"Our members value and work hard to develop relationships with Aboriginal communities and will continue to work together to understand the application of this decision." Suncor oil refinery outside of Fort McMurray, AB with the Syncrude Refinery visible in the background in 2009. Photo by Colin O'Connor, Greenpeace.

Much attention is also aimed at TransCanada and its Energy East pipeline. If built, it would become largest pipeline in North America —pumping Alberta bitumen to terminals in Quebec City and St.John, while slicing one-third of Canada’s 622 Aboriginal communities.

"The decision has not impacted our continued commitment to build strong and trusting relationships with Aboriginal communities in proximity to our proposed projects,” wrote TransCanada’s spokesperson Mark Cooper.

As a sign of Tsilhqot'in's growing stature, the Premier of B.C. Christy Clark apologized last fall for the wrongful hanging of six Tsilhqot’in war chiefs in 1864 and 1865. The conflict arose out of resource-seeking interlopers attempting to slice roads through the Chilcotin region. Eighteen whites were killed. Blankets with smallpox that wiped out the community followed.

The century-and-a-half-later exoneration was a symbolic gesture that's coinciding with new government negotiations on the transfer of vast sums of royalties that currently flow to the Crown from businesses, such as cattle ranches and lodge owners.

And getting to this position hasn't been easy. At an Elder’s meeting, Chief William spoke to members about the strains on the band’s purse, and how a long celebrated annual rodeo has struggled to find sponsors. Taking their land battle to the Supreme Court took an entire generation, and drained millions of dollars.

But the hope is, the royalties will bring improvements to the roads, school and health clinic.

The newfound sovereignty has also seen more an ambitious stand on grizzly bear management, with the Tsilqot'in tribal chair recently declaring the province's hunting licenses in the area "illegal." Tsilqot'in want more "believable" grizzly bear counts, and the establishment of a Tribal Park that would among things protect grizzlies' salmon-eating habitat. The apex predators are considered sacred.

Chief William says the decision also strengthens their case against the Taseko Mines' proposed $1.5-billion copper-gold project in the sacred Fish Lake area. The leader said he's not against all development, and the hope is tourism will grow. The areas' wild horses among the dry mountain views are considered a major draw. The chief is often asked to explain the Tsilqotin’in decision —to the Vancouver Board of Trade this past week, but also to young people in his community, where message is more fundamental.

“I would say to our children that you are the first persons of this country and you are recognized. You have Aboriginal rights and title, and that you have jurisdiction. You have traditional ancient history and laws, that put you here.“

"There’s legends and stories about our people in this country and that’s going to continue. And we’re going to improve this country. That’s what I’d tell em'.”