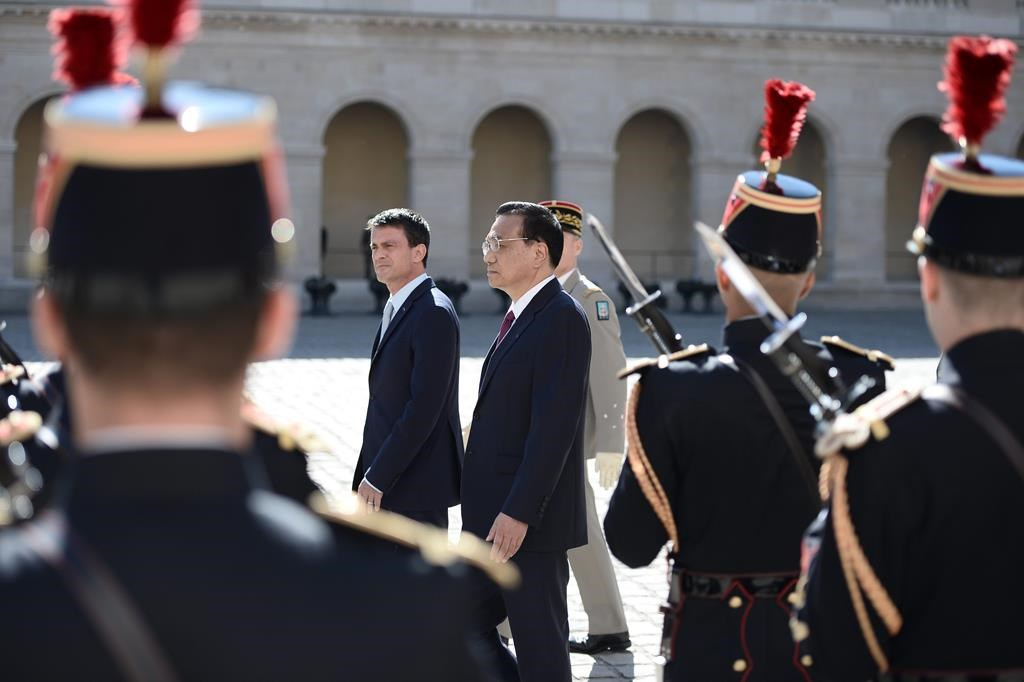 Photograph by The Canadian Press
Previous story
Next story

PARIS — China on Tuesday announced its contribution to a global climate pact that’s supposed to be adopted this year in Paris, pledging to reduce the intensity of its carbon emissions and to halt their growth by 2030.

During a visit to the French capital, Chinese Prime Minister Li Keqiang said in a statement that the world’s most populous nation and top carbon polluter will aim to reduce its emissions per unit of gross domestic product by 60−65 per cent by 2030 from 2005 levels.

Beijing’s goals, which were formally submitted to the U.N. later Tuesday, also included previously announced pledges to achieve a peak in overall emissions around 2030 and to raise the percentage of energy consumption from low−carbon sources to 20 per cent by that year.

Li said the targets show "that China is exerting its utmost in addressing climate change, and that China is fully committed to playing an even greater part in global governance and in advancing common development of mankind."

The U.S. and the European Union have already announced their climate targets, meaning the world’s top three carbon emitters have now made pledges for the Paris deal, which would be the first agreement to require both developed and developing nations to take actions to curb global warming.

China announced some of its targets last year in a joint statement with the United States, injecting momentum into the climate talks by signalling that two countries that had previously been at odds in the negotiations were moving forward together.

After a meeting with Li, French President Francois Hollande said China’s contribution "confirms its commitment to build an ’ecological civilization.’"

"China has only ever been on defence when it comes to climate change, but today’s announcement is the first step for a more active role," said Li Shuo of Greenpeace. "For success in Paris, however, all players — including China and the EU — need to up their game."

In a detailed submission to the U.N., China listed a range of policies it said would help it achieve its goals, including reducing its reliance on high−polluting coal for electricity generation, scaling up renewable sources like solar and wind power, increasing energy efficiency, improving urban planning and public transport and even "promoting voluntary tree planting by all citizens."

China said it aims to increase the volume of its forests — which absorb carbon dioxide from the atmosphere — by 4.5 billion cubic meters (about 160 billion cubic feet) by 2030 compared to 2005 levels.

The document spelled out China’s expectations for the Paris deal, reiterating its long−held position that developed countries need to take the lead in cutting emissions and helping poorer nations limit theirs.

But it also showed it accepts that China as a major emerging economy has a special role among developing countries by pledging to establish a "south−south" fund to help the poorest and most vulnerable countries deal with climate change.

That’s a shift from the previous, failed attempt to craft a global climate deal six years ago in Copenhagen, when China insisted on a firewall between developed and developing countries.

"This is a clear sign that we’re moving past the old developed−developing country divide to a new understanding that all major economies have to contribute their fair share to the global effort," said Bob Perciasepe, president of the Center for Climate and Energy Solutions, a think−tank in Washington.