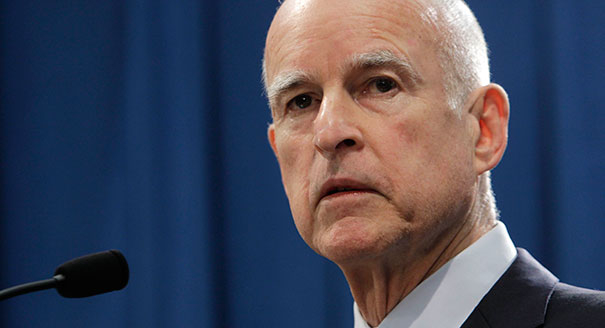 California Governor Jerry Brown slammed U.S. Republicans' climate change inaction at the Climate Summit of the Americas in Toronto today, saying that they had to "get with it."

“One of our two major parties that happens to be in control of the Congress almost to a person denies climate change as real, or even if they might admit it, they don’t want to do anything about it and so with that wet blanket in the effort we’re left to the executive branch and President Obama, so that’s why action by our states is absolutely crucial and I think if you look to the rest of the world it’s very clear that we’re not headed in a direction at a rate of speed that’s going to save us from real catastrophe, so sub-national units, businesses, non-profit groups, have to mobilize together. That’s the only way we’re going to be able to change the direction of the world’s going, which is not a good place,” said Brown, who spoke alongside Ontario Premier Kathleen Wynne and his Quebec counterpart Philippe Couillard.

Sub-national partnerships are bringing together California with Canadian provinces like Ontario and Quebec, to form the largest cap and trade market in the western hemisphere, with Brown saying that states and provinces elsewhere in the Americas, Europe, and Asia were also seeking greater action on curbing greenhouse gas emissions.

Couillard chimed in by saying that carbon producers had to take the lead in progressively shifting to green energy, citing the example of Norway, which has imposed a carbon tax and funded initiatives such as electric car development, despite that country pumping out millions of barrels of oil.

“We at the provincial level and the territorial level are basically filling the void if I can say so and showing to the rest of the world that we are active,” said Couillard.

He said that with BC’s carbon tax, together Quebec (and soon Ontario’s) cap and trade, more 70 per cent of Canada’s would live in a province with a significant carbon pricing program aimed at cutting emissions.

“Good science tell us that about a third of the oil has to stay in the ground, of known reserves, about 50 per cent of the gas, and over 90 per cent of the coal. Now how we do that will be worked out over time, but that has to be the goal. There’s not one way to do it, there will have to be a variety of efforts. In California, I’ve made the pledge that we will reduce petroleum products for cars and trucks by 50 per cent by 2030. That’s a big hill to climb and we will work out the ways that we get there,” said Brown.

But he said that the costs of inaction far outweighed any expenditure on climate mitigation strategies, a point echoed by Wynne, who said that for example the cost of home and business insurance would skyrocket if nothing was done.

Brown, profiled in The New York Times as having a "deep" record on environmental policies, has collided with oil companies, blocked offshore drilling, sought solutions to the state's water-supply puzzle" and "advocated for clean energy" over four decades. He recently set targets to slash carbons emissions below 40 per cent of 1990 levels by 2030.

When asked his thoughts about the Harper government's promotion of Alberta's carbon-heavy oil sands industry, Brown avoided criticizing the prime minister directly, but said Canada has "a long way to go."

"Canada has a long way to go, as does the United States, so it's not about pointing fingers," Governor Brown told The National Observer. "We've got a lot to do, but some people aren't even on board to know that. So, I would say, let's get to work, lets work together, and make the world a livable world for all of us."