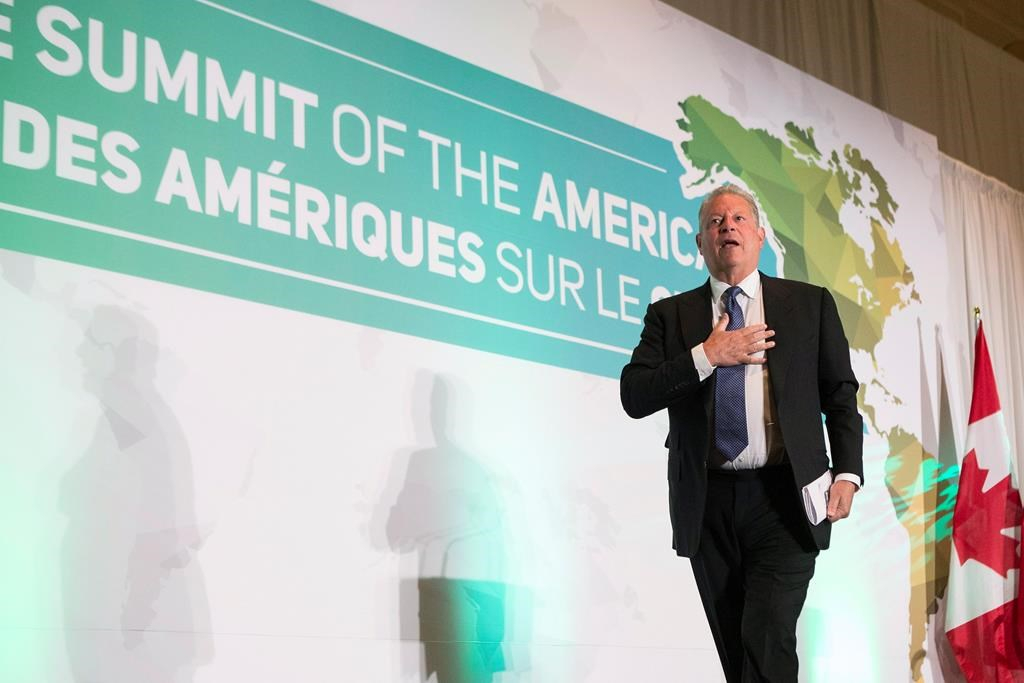 Al Gore photo from Canadian Press
Previous story
Next story
Former U.S. Vice President Al Gore issued a rousing call to arms for planet earth during his keynote address at the Climate Summit of the Americas in Toronto on Thursday.

He said urgent action was needed to prevent climate-related disasters around the world. Gore pointed to water shortages caused by climate instability in Syria as one of the key factors that sparked a devastating civil war.

"Some of you know the underlying story of what caused the gates of hell to open in Syria. Our hearts are heavy when we even think about the tragedy in that land. From 2006 to 2010, [Syria] had a climate-related drought that destroyed 60 per cent of their farms and killed 80 per cent of their livestock and drove a million and a half climate refugees into the cities of Syria, where they collided with another million and a half refugees from the Iraq War, and the WikiLeaks disclosure of documents inside the Syrian government in that era show their discussion [of] ‘we can’t deal with this’," said Gore.

Gore warned that governments that have trouble ruling their nations at the best of times will be “tipped towards chaos,” by climate change.

In addition to the war in Syria, Gore highlighted other concerning signs from around the world, including the highest ever temperature recorded in Germany on July 8, a heat wave in Pakistan that has claimed more than 1,200 lives, and severe drought in California.

“Almost every night on the television news, it’s like a nature hike through the Book of Revelation,” said Gore, pointing to wildfires in Saskatchewan and Washington State, ongoing droughts in California and the Caribbean.

"You can go around the world and see that Mother Nature is sending us very clear messages," said Gore.

He warned that every day, 110 million tons of greenhouse gases are pumped into the atmosphere, equivalent to detonating 400,000 Hiroshima bombs every 24 hours, denouncing the use of the earth’s atmosphere as an "open sewer,” for gaseous waste by polluting industries.

Carrying on down this path would, according to Gore, contribute to a sixth ‘great extinction’ of life on Earth as the planet heats up and extreme weather becomes the norm.

“This first question ‘must we change?’ cannot be ignored because the scope and scale of the responses that are necessary will be difficult to summon without a sufficient appreciation for how high the stakes are. It is a challenge to our moral imagination,” said Gore, adding that “we must change.”

But addressing his second question of, “can we change?” Gore sounded a more hopeful note, noting that countries like Bangladesh have been making a rapid transition from fossil fuels to solar power, saying that despite its widespread poverty it was installing, on average, two photovoltaic units every two minutes 24 hours a day.

He likened the fight against climate change to the great mobilization against fascism during World War II and the immediate postwar period when the USA rebuilt a shattered Europe with Marshall Plan aid.

According to Gore, if local and national governments develop renewable energy, it will create new jobs that will benefit local people in those communities “and they’re the kinds of jobs that can’t be done by robots.”

This led Gore to ask his third question of ‘Will we change?’, saying that a large part of that answer lies with "subnational units" such as Ontario and California filling the gap left by national governments.

Recent examples of change include the Province of Ontario closing all its coal-fired power plants by 2013 and California’s pledge to slash carbon emissions below 40 per cent of 1990 levels by 2030.

Already, more than 200 renewable energy projects have been built through California’s Renewables Portfolio Standard since the legislation was first introduced in 2002.

"We're going to win this. Be of good cheer," Gore said.

He said that if nations and communities fail to take action on climate change, future generations will ask “what were you thinking?”

But if humanity succeeds in halting a brewing catastrophe, future generations will ask “How did you find the moral courage to change?”

“Political will is a renewable resource,” said Gore at the end of his address.